The Possibility Of Renewal 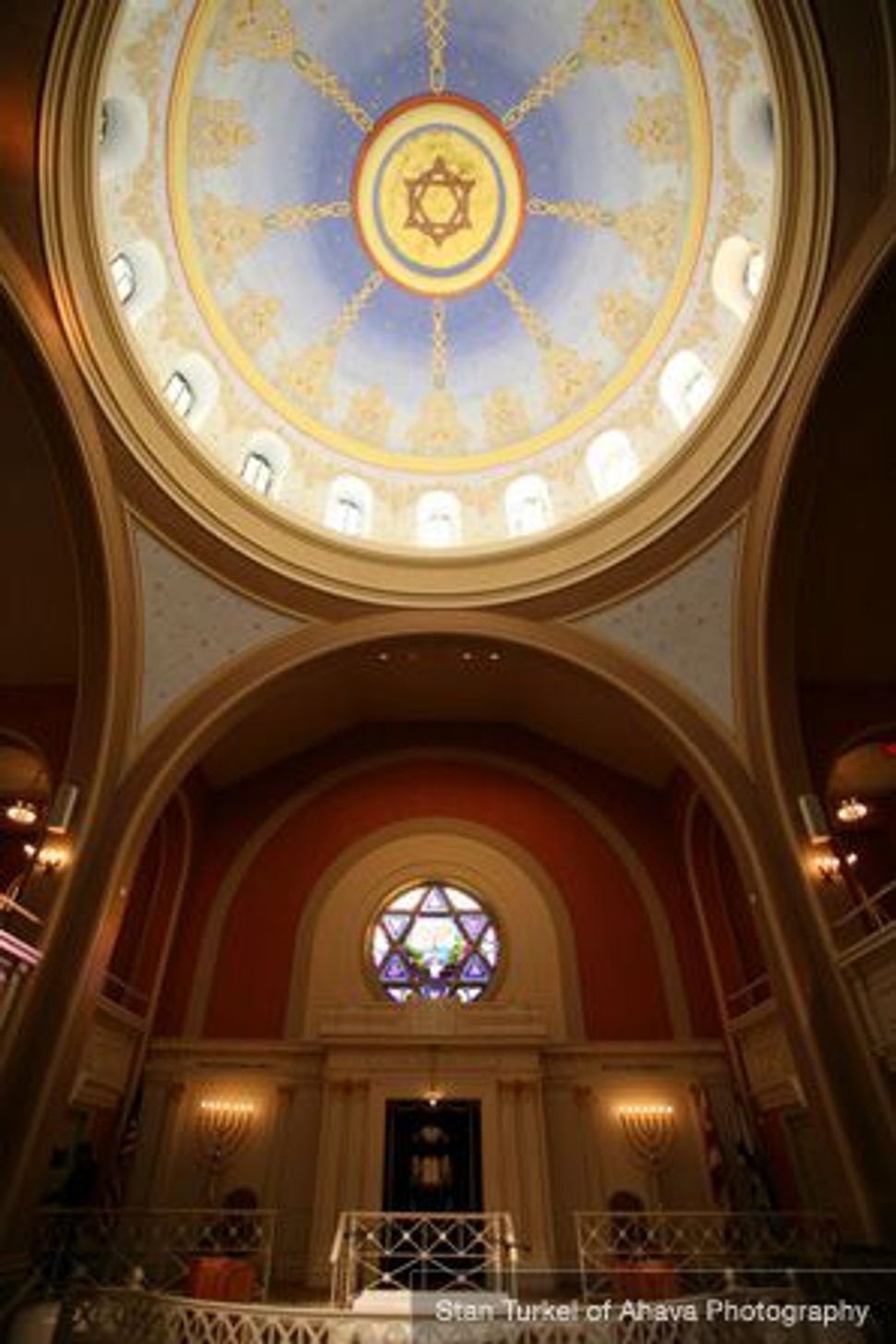 If there’s one strain that runs consistently throughout Jewish history, it’s that of loss: loss of people, places, institutions, languages, sensibilities and identities. Given this litany of woe, I have often thought that the notion of “once upon a time” seemed more apt for the Jews than for the characters of fairytales. 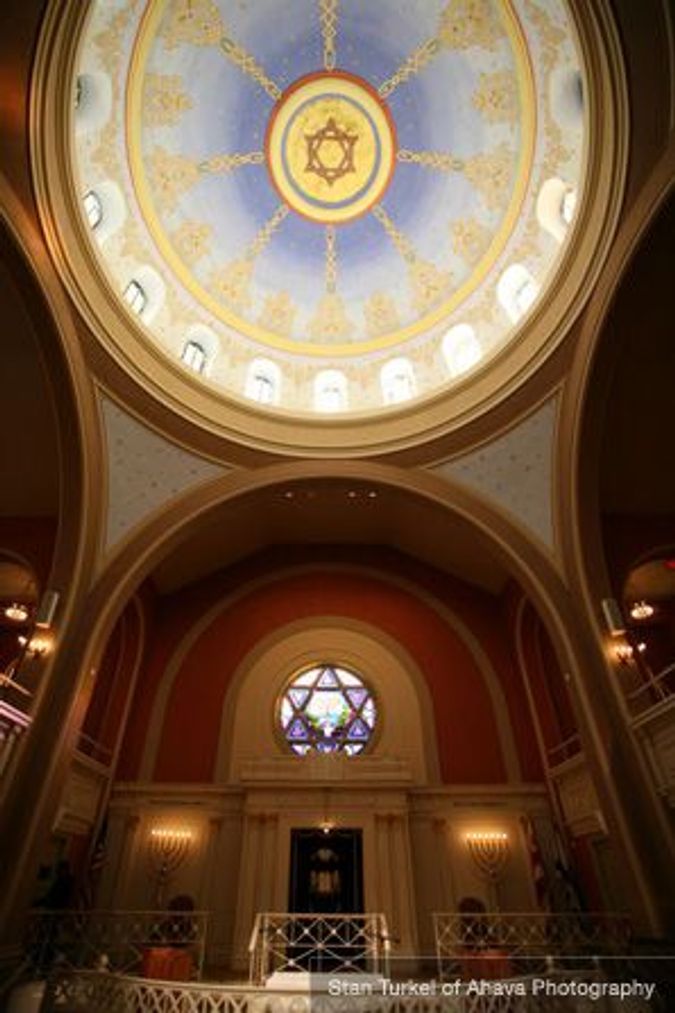 Occasionally, though, something breaks the mold, bucks the trend and thumbs its nose at the crushing weight of the past, substituting gain for loss, presence for absence. That something, I’m happy to report, is the Sixth and I Historic Synagogue, a restored synagogue-cum-“Jewish meeting place” in downtown Washington, D.C. — an institution whose very name grounds it in the here-and-now and situates it squarely within the grid of urban life. There’s also a magical, indeterminate quality about the place, which way back when in 1907 started out as the second home of Adas Israel.

Established in 1870, at a time when Washington Hebrew Congregation, the city’s very first synagogue, was in the process of aligning itself with the Reform movement, Adas Israel prided itself on its allegiance to what it called the “German Orthodox Minhag Ashkenaz.” It also aspired to be a truly “metropolitan synagogue.” Adas Israel’s first house of worship, built downtown at Sixth and G Streets NW, made good on both claims.

As more and more Jews of Eastern European origins settled in D.C. at the turn of the century and joined the synagogue, the building became “too small to accommodate all the people on feast days and solemn festivals,” as The Washington Times reported in 1903. Accordingly, the congregation purchased a plot of land at 6th and I Streets, a few blocks from its original location, and built a new, more commodious edifice where it remained well into the postwar era, ultimately becoming a Conservative synagogue.

With its “light gray vitrified brick with handsome terra cotta trimmings and unglazed red tile roof,” Adas’s new home — or, as an advertisement for High Holy Day seats put it in 1907, the “Adas Israel New Synagogue” — was a combination of “modernized French and Byzantine” architectural styles, replete with a series of domes, a score of “richly colored stained glass windows” and a fleet of lighting fixtures fashioned out of light bulbs. The sum of its decorative elements added up to a structure that was handsome, modern and proud.

The congregation, its fate intertwined with that of the city, remained downtown until the early 1950s. But then, like so many other postwar urban synagogues throughout the United States, it had little choice but to follow its congregants who had already moved to more sylvan neighborhoods. Selling its building to the Turner Memorial African Methodist Episcopal Church, Adas built yet another resolutely modern structure in the Cleveland Park neighborhood, where it remains.

The Sixth and I facility might well have gone the way of so many Jewish institutions — the stuff of vestigial memory — had it not been for a serendipitous string of events, from the decision of the church to leave the city to the timely intervention of both Laura Cohen Apelbaum, executive director of the Jewish Historical Society of Greater Washington, and a trio of D.C. philanthropists who, pooling their considerable resources, purchased the building from the church in 2002.

They then set about restoring it, embarking on a communitywide effort that not only involved the descendants of those who had once davened there but also enlisted the technical know-how of those whose forebears had erected the building in the first place.

The newly restored building, now known as the Sixth and I Historic Synagogue, opened its doors in 2004. A far cry from the usual synagogue, charitable organization or community center, Sixth and I is feeling its way as it goes, hoping to provide a new and fluid paradigm for Jewish life in 21st-century America. Its roster of activities runs the gamut from religious services to lectures, performances, classes and private celebrations.

I hope Sixth and I succeeds beyond its wildest dreams. It’s been quite some time since I fell for a Jewish institution, but this one, well, it’s stolen my heart and I can’t quite put my finger on why. I don’t hail from Washington, nor do any members of my family or circle of friends, so it’s not nostalgia that fuels my affection. Nor do I have a particular affinity for bulbous domes or for the fusion of French and Byzantine architecture. How, then, to account for my enthusiasm?

I suppose it has to do with the way the building itself has somehow managed to weather change even as everything around and within it has not. I, suppose, too, that it has something to do with the way its history is tied to the ups and downs, to the ebb and flow, of the modern urban experience as D.C. and other cities rise, fall and rise again.

But that’s only the half of it. More compelling still is the way that Sixth and I allows the claims of the past to impinge on the present in a way that invites one’s attention instead of insisting on it. It stands not as a rebuke but as a promise.

Perhaps, then, that’s what I find most appealing about Sixth and I. Everything about the place — the soft-hued walls of its sanctuary, the proud thrust of its bimah, the gentle curve of its lighting fixtures, the Jewish star that stands like a sentinel on the roof — speaks to me of the possibility of renewal, which, come to think of it, is just what Rosh Hashanah is all about.

The Possibility Of Renewal