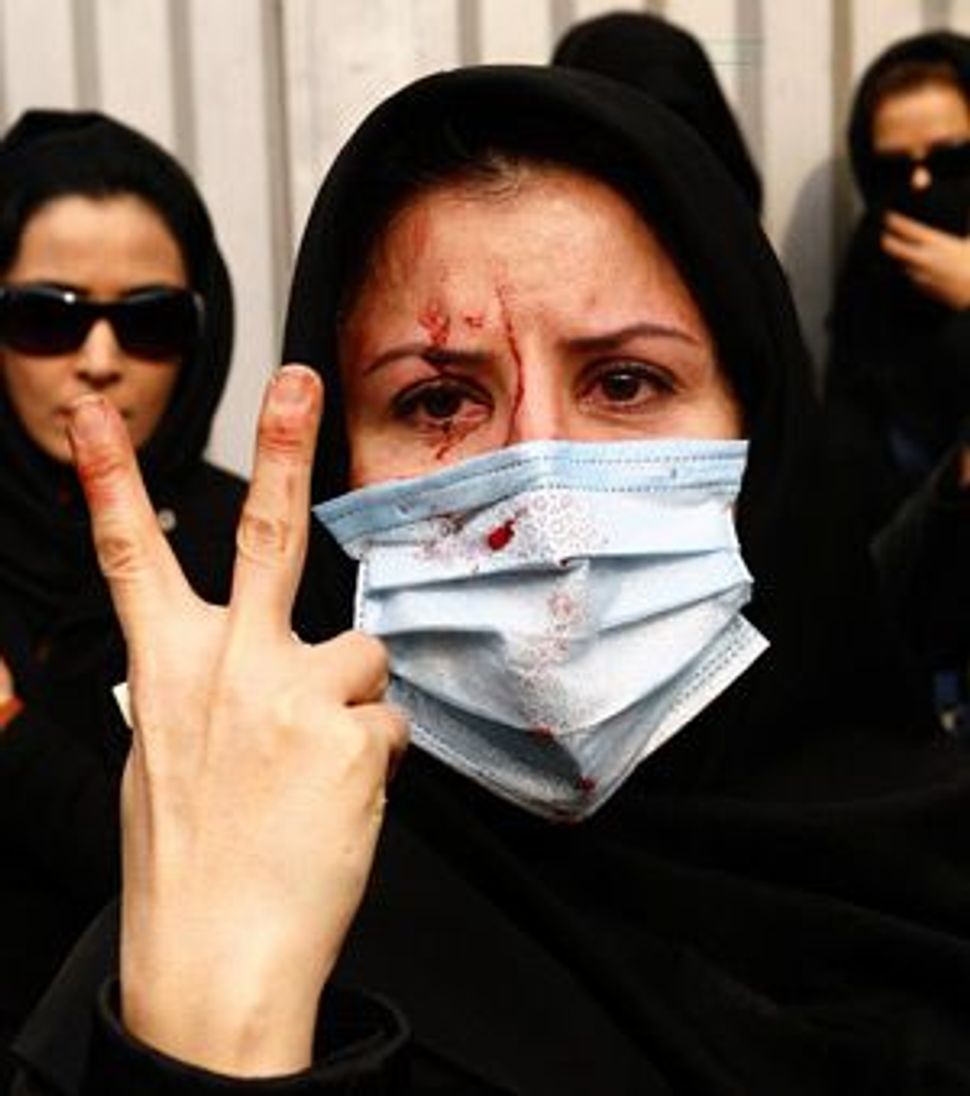 Bloody but Unbowed: An injured Iranian opposition supporter flashes a V-sign during clashes with security forces in Tehran on December 27. Thirteen people were reported killed during recent demonstrations. Image by GETTY IMAGES 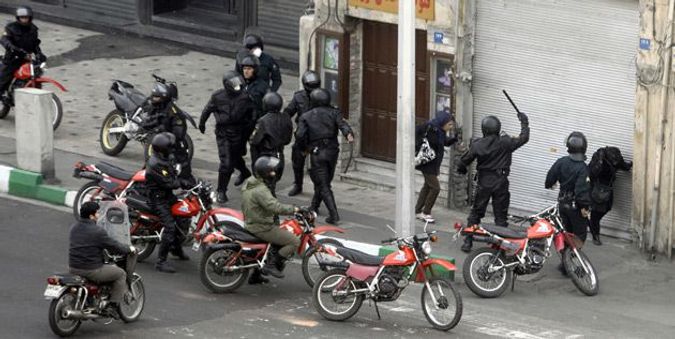 Crackdown: Protests in the streets of Iran in the last days of December were violently suppressed. Image by GETTY IMAGES

As anti-government protests — and government repression — flare in Iran, Jewish groups remain focused on the issue of nuclear proliferation there, prioritizing this problem over concern for the country’s opposition movement.

In interviews, Jewish leaders voiced sympathy for the cause of democracy backed by the protesters. But even as the administration is reportedly considering a shift to a strategy of narrow, targeted sanctions toward Iran — in part to take account of the surging protest movement — the Jewish community remains committed to more sweeping sanctions that Iran’s democracy activists decry as harmful to their cause. 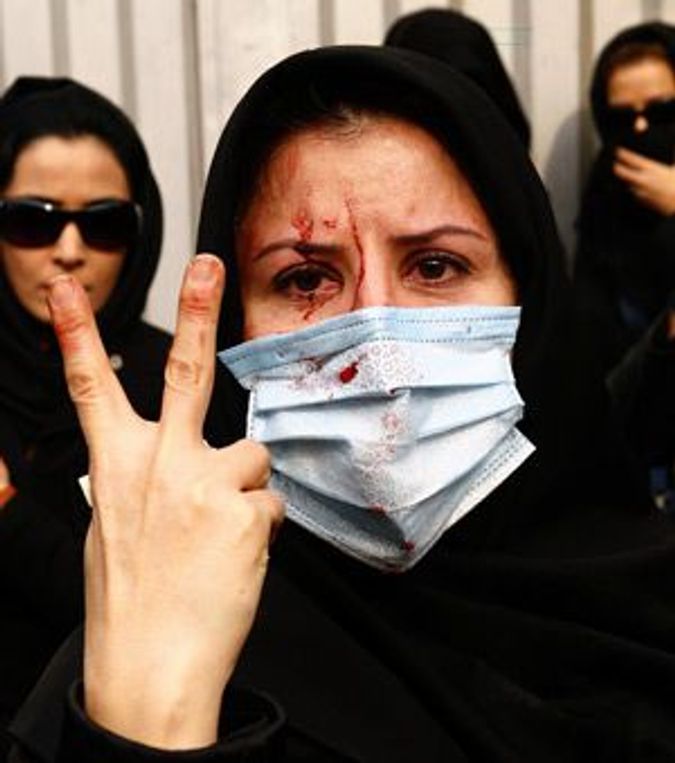 Bloody but Unbowed: An injured Iranian opposition supporter flashes a V-sign during clashes with security forces in Tehran on December 27. Thirteen people were reported killed during recent demonstrations. Image by GETTY IMAGES

“For us, this was always the primary concern, because a nuclear Iran is an existential threat to Israel,” said Meagan Buren, director of research and training at The Israel Project, a pro-Israel group active on the Iranian issue.

When it reconvenes in January, Congress is poised to quickly put tough sanctions against Iran in place that would target its oil sector with the aim of destabilizing the Iranian economy. But leading backers of the Iranian opposition have voiced concern that broad sanctions of this sort will strengthen the regime and hurt the credibility of the “Green Movement,” as the protesters have dubbed their cause.

Now, the Obama administration is reportedly reconsidering its support for those congressional sanctions. According to news reports, administration officials are moving instead toward the idea of narrower sanctions that would aim at the interests of Iranian government leaders and of such groups as the Islamic Revolutionary Guard Corps, a hard-line bulwark of support for the regime.

David Harris, executive director of the American Jewish Committee, saw no reason that the administration could pursue both approaches to sanctions.

“We need to look at all available means, all available levers, and not try to become too smart,” he said. “We need to find ways to zero in on those in power, but at the same time, Iran’s Achilles’ heel is its dependency on refined oil, and that is an issue too big to simply set aside out of concern it could maybe weaken the protest movement.”

An Israeli official said that his government had “no preference” on what sanctions track the United States pursues, as long as it pressures Iran to stop producing enriched uranium, as demanded by the international community. Israel and other countries fear that Iran is using enriched uranium to develop nuclear weaponry.

The sanctions legislation that would target Iran’s import of refined petroleum products was passed overwhelmingly by the House of Representatives December 15. Senate leaders have pledged to bring the bill to a vote after they return from the New Year’s recess.

In a parallel track, the United States is expected to begin intense discussions in January with members of the United Nations Security Council to reach a decision on a new round of international sanctions. Administration officials describe the international sanctions as their preferred route, if they are sufficiently tough, with the congressional measure as a fallback.

The renewal of demonstrations in Iran comes after several quiet months, which follow, in turn, a summer of mass protests against the results of the country’s June 2009 presidential elections. Protesters — supported by many independent analysts — denounced the election result as a fraud. The declared winner, President Mahmoud Ahmadinejad, backed by Iran’s supreme leader, Grand Ayatollah Ali Khamenei, cracked down hard on the protesters.

The reignited protest movement in Iran has received more support in Washington than did the June unrest. President Obama, in his strongest statement so far on this issue, expressed sympathy for the aspirations of the protesters, and warned that “the decision of Iran’s leaders to govern through fear and tyranny will not succeed in making those aspirations go away.”

When the opposition protests initially broke out in June, the United States was getting ready to begin diplomatic talks with Iran. These talks were in line with Obama’s pledge to seek engagement with Tehran as his first option for dealing with the country’s nuclear program.

Since then, the diplomatic initiative has foundered, with Iran rejecting a nuclear deal presented to it by the International Atomic Energy Agency with backing from the United States, and with the West, so far, rejecting Iran’s counterproposals.

Ironically, Ahmadinejad was initially receptive to the IAEA proposal. But his electoral rivals, who now lead the green protest movement, rejected the proposal and attacked him for giving in to foreign pressure. A number of analysts viewed this in the context of domestic politics. The opposition’s rebuff, it was said, allowed its leaders to burnish their nationalist credentials in the face of the government’s attacks on them as foreign pawns.

Opposition activists and supporters also criticize the drive for increased fuel sanctions against Iran as a step that could undermine their movement. Both Mir Hossein Mousavi and Mehdi Karroubi, leaders of the Iranian green movement, have spoken out against sanctions, arguing that they will hurt the people of Iran, not the regime.

An unofficial spokesman for the movement, filmmaker Mohsen Makhmalbaf, visited Washington in November and urged the United States to take on the issue of human rights and democracy in Iran, and not focus solely on the nuclear problem. He did not rule out the use of sanctions altogether, but called for a form of sanctions that would target the Iranian Revolutionary Guard Corps — the regime’s hard-line pillar of support in the military — and not the entire public.

“We need certain sanctions that hurt the regime, not the people,” Makhmalbaf said at a November 20 event in Washington at the Carnegie Endowment for International Peace, which was attended by administration officials.

Opposition activists point to several flaws they see in the American fuel sanctions initiative: imposing hardship on the Iranian people, strengthening the government and the Revolutionary Guard that would be in control of fuel rationing and the black market, and damaging the legitimacy of the opposition because it could be seen as siding with the West.

Administration officials and lawmakers largely dismissed these concerns. Opposition leaders in Iran, they maintained, were obliged to take a critical approach toward Western sanctions in order to maintain their nationalistic credentials at home.

For Jewish and pro-Israel groups, the focus has almost always been on the nuclear clock. Citing concerns of an Iranian threat to Israel, and the steady advance of Tehran’s nuclear program, Jewish groups argue that sanctions are an essential step needed to pressure the Iranian government. Proponents of the legislation say that creating a fuel shortage in Iran would increase pressure on the regime and force Ahmadinejad to back off of his plans for obtaining nuclear capability.

Almost all Jewish groups strongly support the fuel sanctions bill going through Congress and have urged its immediate passing. This legislation is the key item on the agenda of the American Israel Public Affairs Committee.

The few voices opposing sanctions come mostly — but not only — from the left wing of the Jewish community, among them Keith Weissman, the former top Iran analyst for AIPAC. “Sanctions are a waste of time,” Weissman said. “It will make us, the Jews, feel good, but will have zero effect.” Weissman argued that sanctions would “help those we want to harm and harm those we want to help.”

On the center right, however, Shoshana Bryen, senior director for security policy at the Jewish Institute for National Security Affairs, also urges a more targeted strategy that would aim directly at trade and finance conducted by the Revolutionary Guard, which owns many businesses in Iran. She also urges increased broadcasts to Iran and steps to ensure that the protesters have money, food and public support.

“Not to support the people who want to change the regime? You [have] got to be out of your mind,” she said.

Last fall, the organized Jewish community briefly embraced the cause of human rights and democracy in Iran soon after the demonstrations there reached their peak. With public interest riveted by the democracy protests, Jewish groups took the title of “Stand for Freedom in Iran” for a demonstration they held outside U.N. headquarters in New York on September 24. Publicity for the event made no mention of the nuclear issue. Protest signs at the event blasted Iran’s human rights record. And onstage, two actors with tape on their mouths symbolized the suppression of free speech and human rights in Iran.

Two small Iranian-American groups and several labor unions joined the Jewish groups in denouncing Ahmadinejad, then in town for a U.N. visit.

The tactic was short-lived. Communal focus shifted back quickly to the nuclear issue and to sanctions as a means of blocking Iran’s program. Jewish leaders maintain that pressure created by sanctions could eventually help the opposition, although they stressed the need to refrain from actively supporting Iranian dissidents.

“It’s not in our best interest to support them openly, because that would harm them,” said Jennifer Laszlo-Mizrahi, president and founder of The Israel Project. “We keep a respectful distance.”