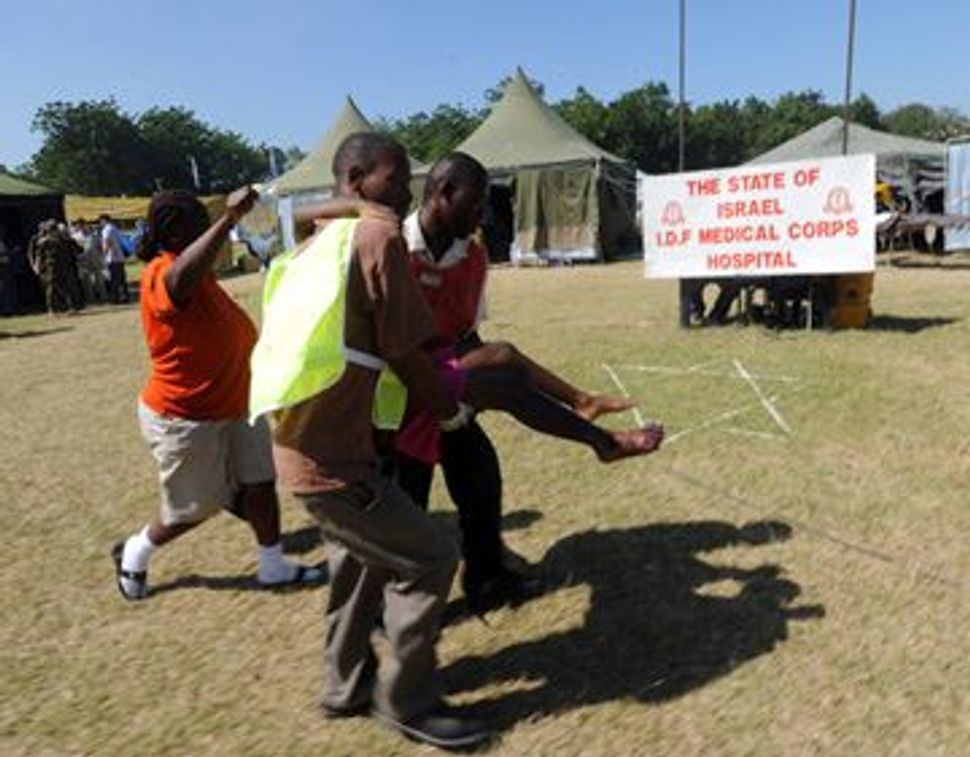 Providing help: An injured woman is rushed to an Israeli medical relief center in Port-au-Prince. Image by AFP/GETTY 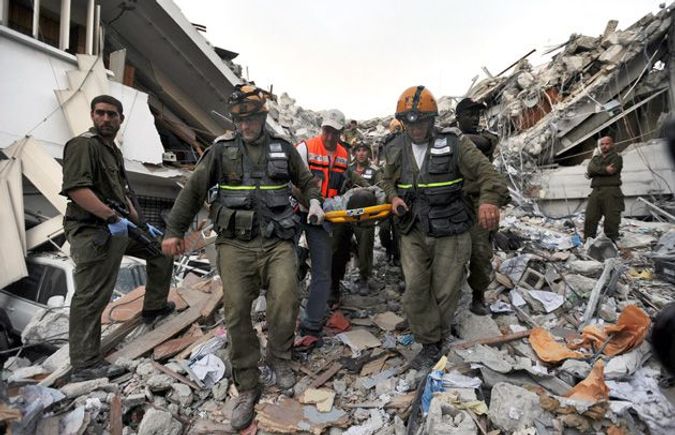 To the Rescue: Israeli relief workers carry an injured man rescued from a building collapse in Port- au-Prince, days after the earthquake left Haiti?s capital in ruins. Image by Getty Images

The crowd broke out in cheers as an ambulance pulled out of what was once Haiti’s main tax administration office, carrying a survivor rescued from the wreckage by an Israeli team four days after this city’s devastating earthquake. 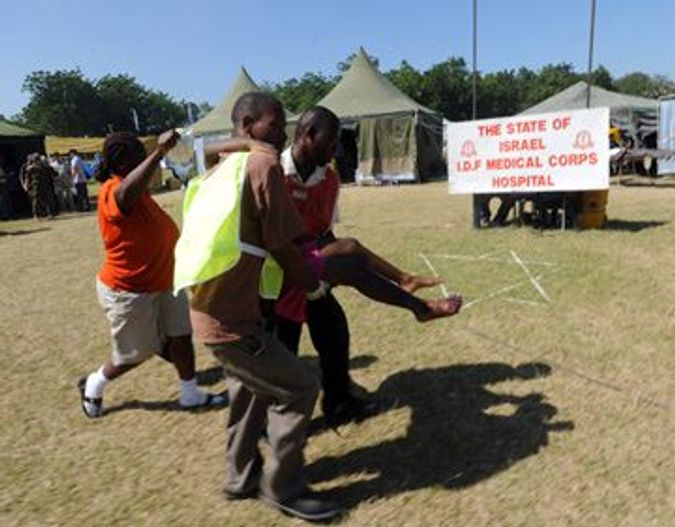 Providing help: An injured woman is rushed to an Israeli medical relief center in Port-au-Prince. Image by AFP/GETTY

“Bravo!” the onlookers shouted. “We love you, Israel.”

It was a picture-perfect moment for Israeli public diplomacy.

But Major Zohar Moshe, commander of the rescue team, dismissed the notion. “It is not about that, it is about saving lives,” he said.

Nevertheless, on the ground was a retinue of Israelis dedicated to making sure people heard about their country’s humanitarian mission and spreading the word. Press officers from the Israeli military were flown in, as were photographers and a video team to document the work of Israeli medical and rescue personnel. They distributed daily footage to the press. Representatives of Israeli and foreign media were embedded with the group, and other reporters were invited.

A day after the Israeli field hospital opened, two Israeli officers in uniforms canvassed the row of TV producers sitting in their broadcast positions along the city airport’s runway. “We’re telling them about our hospital,” one said.

But no prodding was needed. The press swarmed to the Israeli site, and what they saw impressed them.

A CNN report, widely circulated on the web by

pro-Israel activists, showed an injured Haitian in a rudimentary makeshift hospital, his doctor telling the camera that if he doesn’t make it to a hospital where he could undergo surgery shortly, he would die. A quick cut followed to the site of the well-equipped Israeli hospital.

“I’m just amazed,” the CNN reporter, Elizabeth Cohen, declared. “This is like another world compared to the other [makeshift] hospital.” Later in the report she asked how it could be that the United States did not set up a hospital in Haiti while “the Israelis came from the other side of the world.”

In less than a week in Haiti, 250 Israeli doctors, nurses and rescue workers not only saved numerous lives of people trapped and wounded — they did more for their country’s image than marketing experts have in years.

“It’s like winning the lottery for doing the right thing,” said Jennifer Laszlo-Mizrahi, founder and president of The Israel Project, a Washington-based pro-Israel media group, describing the positive impact of Israeli PR efforts.

Against the backdrop of the destruction of Port-au-Prince’s health-care facilities, Israel’s relief mission and the elaborate medical facility it set up stood out as crucial. But the effect of this wave of positive attention on Israel’s international stature is not yet clear.

Three days after the earthquake, Port-au-Prince’s general hospital was of little help to the sick and injured seeking care. Dozens stood outside the closed facility, where guards kept them from entering. Medical treatment — if wrapping a crushed limb in bandages and sending the patient off qualifies as treatment — was given outside, on the pavement amidst shouts and weeping.

Relatives of Haitians who perished in the earthquake attempted to bring bodies of loved ones to the morgue, located in the same building, only to be told that there was no more room. Despite the guards’ warnings that the morgue was closed, two men drove up in a pickup truck and dropped two bodies covered in sheets on the ground. Then they drove on.

The Israeli hospital, located on the grounds of a soccer field near the city’s airport, provided a much different experience. Although its wards are no more than army tents with folding beds, the field hospital has advanced surgical facilities, X-ray and imagery machines, and a full staff of professional doctors and nurses from Israel’s top military and civilian hospitals.

The stark contrast between the Israeli-operated hospital and any other medical facility in Port-au-Prince (including a Belgian hospital that was abandoned by its staff due to deteriorating security in the city) made Israel’s public relations work easy.

“As long as people don’t think that the motivation for this was PR and understand that it is a humanitarian cause, then you can’t go wrong,” said Steve Rabinowitz, a Washington-based communications consultant who described the boost Israel’s mission gave to the country’s image as a “home run.”

“It makes people see Israelis as human beings,” said Laszlo-Mizrahi. Her media-tracking data show that since the Israeli team began work in Haiti, thousands of positive news stories about Israel have appeared in the European press, and even more in America.

Experts see such reports as useful in countering a one-dimensional image that views Israel only through the prism of its ongoing conflict with the Palestinians.

“In Europe, Israel’s image is defined by the Goldstone report, so news items like those coming from Haiti can definitely help change that image,” said an Israeli official referring to the United Nations report that accused both Israel and Hamas of committing war crimes.

If any suspicion of an Israeli ulterior motive existed, the lines of Haitians waiting outside the hospital compound for treatment, with nowhere else to turn, stilled most of these claims.

In the Israeli media, there was but one lone, if well known, dissenter:

“A few days before Israeli physicians rushed to save the lives of injured Haitians, the authorities at the Erez checkpoint prevented 17 people from passing through in order to get to a Ramallah hospital for urgent corneal transplant surgery,” wrote Israeli columnist Akiva Eldar of the newspaper Haaretz on January 18. “Perhaps they voted for Hamas.”

“The remarkable identification (among Israelis) with the victims of the terrible tragedy in distant Haiti only underscores the indifference to the ongoing suffering of the people of Gaza,” he lamented, referring to Israel’s tight blockade of the territory.

It may be that the world will refocus soon enough on those scenes. The last time positive news reports about Israel peaked was in August 2005, during its unilateral withdrawal from Gaza. That attitude was short-lived and eventually gave way to widespread criticism over Israel’s policy in Gaza.

And during the first Gulf War in 1992, public diplomacy experts marveled at the outpouring of international sympathy for Israel while it was under attack by Iraqi missiles. Shortly after, however, Washington did not hesitate to pressure Israel into agreeing to attend the Madrid peace conference.

Jim Gerstein, a Democratic pollster and strategist, cautioned that sympathy toward Israel thanks to its humanitarian contribution does not necessarily translate into a change in political attitudes. “The Israeli team in Haiti is demonstrating to the world the remarkable compassion and talents of the Israeli people,” Gerstein said. “When it comes to their understanding of the conflict with the Palestinians, observers tend to focus on the developments on the ground and draw their conclusions independent of these tremendous contributions.”

In Port-au-Prince, this debate seemed all but irrelevant. In the Israeli field hospital, an elderly man lying in bed after undergoing an amputation was asked by reporters if his views on Israel had changed. “I never thought of Israel before,” he replied.