When Putsch Came to Shove 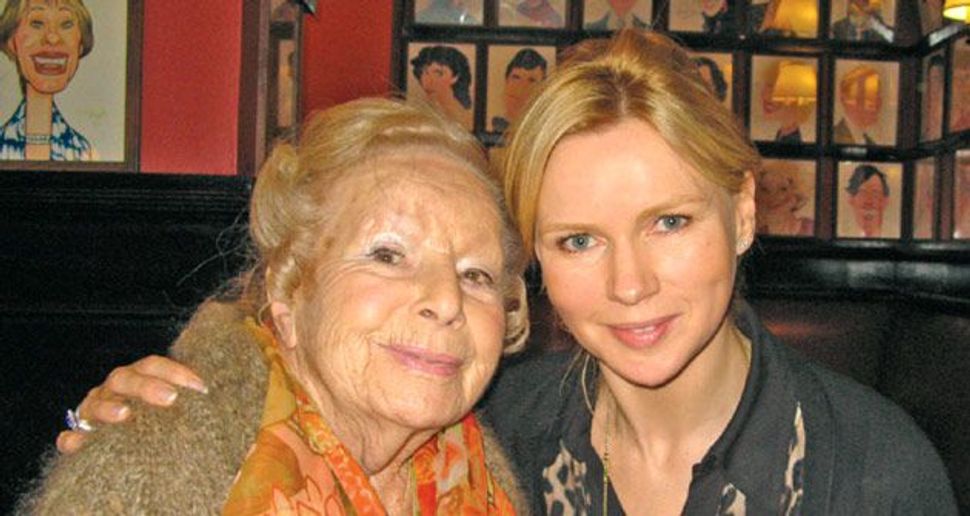 “SAVIORS IN THE NIGHT”: WHEN HITLER’S PUTSCH CAME TO SHOVE, SOME GERMANS PROVED TO BE RIGHTEOUS MENTSHN

“How do you hide a Jewish family in full view?” posited 97-year-old Marga Spiegel, whose memoir, “Saviors in the Night/Unter Bauern: Retter in der Nacht,” is the basis for the film of the same name, which launched January 12 at the New York Jewish Film Festival at Lincoln Center’s Walter Reade Theater. “By saving us, they saved the world,” said Spiegel, as we sat next to each other at lunch at Sardi’s earlier that day.

“To make the film in Germany was difficult,” said the film’s director, Amsterdam-born Ludi Boeken. “To show good Germans is taboo,” he added, but he did it anyway. “Even my intellectual wife told me, ‘You made me, a French Jewess, cry for a dead German.’”

Across from me, the stunning German actress Veronica Ferres, who portrays Spiegel in the film, said: “On December 23, I opened the Hanukkah lighting at the Brandenburg (Gate).” She said thousands of Jews attended, and Berlin’s chief rabbi told them, “We are all a community.”

Ferres recounted how passionately she worked to see the film made: “I saw a notice in the paper, sought out Marga.” She felt a tug from Marga as if Marga were her mother, Ferres said. Then Ferres helped find a producer and money to make the film.

Across the table sat Lia Hoensbroech, who portrays Anni Anschoff, a Hitler Youth maiden who helps Spiegel and her daughter. She told me at lunch: “Marga knows me since I was born. We’re in the same synagogue with my grandmother, who was saved by Latvian farmers. By playing the role, I got a chance to thank (the Latvians) for their courage.”

Born to a life of comfort as a Rothschild, Marga married a Jewish horse trader, Siegmund “Menne” Spiegel, who received the Iron Cross for bravery in World War I — a scene showcased in the film’s opening frames.

“It was not an easy movie for me,” said Spiegel. Of the lighting engineer and the cameraman, both Israeli, she recalled: “I had never heard Hebrew [spoken] before.”

“My husband was so German,” said Spiegel. “He was a good Westphalian. He knew no other language.”

After the war, she said, “we stayed in the same place….

“The town we now live in has 800 Jews, but they are all from the East. My daughter (who as a child in the film recoils at the sight of a crucifix above the bed in which she is to sleep) always stayed Jewish. She became a French-English translator. She did not want to do German.

“My granddaughter is in the U.S. She named her son Siegmund, after my dead husband.”

The film festival is a joint venture between the Film Society of Lincoln Center and the Jewish Museum.

Describing her first encounter with Spiegel to the opening night audience, Ferres recalled: “I was nervous when I first met Marga. I had read that she had suffered and wanted to love this person (whom I portray).

“When she opened the door (for our first encounter), she was 93, 94 years young and hilarious. She gave me tips about men. She enriched my life.”

“Saviors” opens a window on a little-known chapter of courage and survival during World War II.

“It is not that the people lost the land, but that we could be so hated,” said prize-winning filmmaker Atom Egoyan, fragments of whose film “Ararat” — a meditation on the 1915 Armenian genocide — were screened at the January 10 symposium and program called “Imagination and Catastrophe: Art and the Aftermath of Genocide” at the Center for Jewish History. Sponsored by the center and the American Society for Jewish Music, the program was moderated by Donna-Lee Frieze, a scholar in the fields of genocide and film at Deakin University in Melbourne, Australia. Panelists included poet and author Peter Balakian, novelist Marcie Hershman and fiction writer and critic R. Clifton Spargo.

Prefacing her performance of Hugo Weisgall’s “The Golden Peacock,” pianist Laura Leon (my daughter) read an excerpt from her July 7, 1981, conversation with Weisgall, who died in 1997: “There is no question…that the reason I am being drawn more and more to Jewish material is because I feel that I have not made the proper statement about the whole business of Hitler and the Holocaust,” Weisgall told her. “The main reason for ‘The Golden Peacock’ is a kind of defiance…. Who else is going to do Yiddish folk songs if composers like myself don’t do them?”

This was one of several conversations with the composer Laura Leon had in preparation for her doctoral thesis on his song cycles.

Weisgall was a pre-eminent American composer of opera in the 20th century. His opera “Esther,” based on the Book of Esther, had its premiere in 1993 at the New York City Opera, and I was privileged to see its triumphant return this past November.

Laura Leon said that Weisgall was present at the liberation of the Terezin concentration camp and, according to his son Jonathan, “He fought with his own sense of responsibility for failing to save his European cousins from those concentration camps.”

Leon noted that the title “The Golden Peacock” (“Di Goldene Pave”)is often found in Yiddish folklore with one of its symbols representing freedom.

Having grown up with the traditional melodic versions of Shlof Mayn Kindt, Shlof Keseyder (Sleep My Child), Der Rebbe Elimelekh (Rabbi Elimeylekh) and Baleboste Zisinke (Sweet/Pretty Mistress), which were on the program, I found Weisgall’s contemporary interpretation of these evocative songs — performed by Leon and beautifully articulated in Yiddish by Canadian soprano Emily Duncan-Brown — unsettling. No doubt that is exactly what Weisgall intended.

In reply to a question from the audience as to why the Armenian community maintained such a silence about their genocide — grandchildren growing up totally ignorant of their families’ horrific survival stories — one of the panelists said: “Because there is a pathology of silence about the past.”

One of the panelists said, “They did not want the [grand] children to feel that there had once been someone who wanted to slaughter them.” No doubt it was a similar motivation that kept many Holocaust survivors from telling their own stories to their children and grandchildren.

To have tea with 103-year-old living legend, internationally renowned industrial designer Eva Zeisel, served in the Classic Century china service she designed for Regal Stafford, was a rare privilege. I first met Zeisel at last November’s Museum of Arts & Design gala where, along with MAD’s chairman of the board, Barbara Tober, and Shelly Lazarus, chairman of Ogilvy & Mather Worldwide, Zeisel was honored as a visionary. Frail but chipper, she rose slightly from her wheelchair for a standing ovation and firmly declared: “I am still working!”

Zeisel’s bio describes her as “(a) designer who has changed the face of modern design in the 20th century.” In 1947, she became the first woman to have a one-woman show at the Museum of Modern Art.

Zeisel was born Eva Stricker to a wealthy assimilated Hungarian Jewish family. Her mother was the first woman to graduate from the University of Budapest.

Sitting in her apartment near Columbia University, surrounded by samples of her tableware and glass creations, Zeisel casually mentioned that Arthur Koestler had been “my childhood sweetheart.” Zeisel, who joined her brother in the Soviet Union in 1932 and was in 1935 named artistic director of the Soviet ceramics industry, was arrested and accused of participating in an assassination plot against Stalin.

Her diary, which chronicled the 16 months she spent in prison — 12 of them in solitary confinement, “were the basis of Arthur’s book, ‘Darkness at Noon,’” she said.

Zeisel recalled that during the day, she was not allowed to lie down on the couch or sit on the bench in her cell. “We went to bed at 9 p.m. got up at 7 a.m. They would open the door, give me a spoon…ladle two tablespoons of sugar. Another person would come with tea…When you needed [to relieve yourself], they gave you a square brown paper….We ate mostly black bread…I played chess with myself, made tic-tac-toe game pieces out of kneadable bread. Every third day I was taken for a seven-minute walk. Every 10 days, a shower… Sixteen months, 12 in solitary.”

“How do you design now?” I asked. “I make a sketch in the air,” she said, moving her right hand and fingers in a balletic configuration. “Then my assistant traces it on paper…cuts it out. I then adjust it till it is what I want.”

Fatigued, she asked her aide to show me a copy of her as yet unpublished memoir. On the last page, she has written, “I was never anti-Communist, even in prison. I was what I called ‘a former non-Communist.’”

Her most recent dinnerware, called 101, is sold exclusively at Blooomingdale’s. You can also find Zeisel-designed ware at Crate & Barrel.

During my intermittent conversations with her daughter, Jean Richards, an actress and writer, she happened to mention: “My mother’s first husband was Alexander Weissberg-Cybulski.” Editor of a physics journal in the Soviet Union, he was also imprisoned.

He participated in the Warsaw Ghetto uprising. The preface to his book “The Accused” (Simon & Shuster, 1951) was written by Arthur Koestler.

When Putsch Came to Shove