U.S. Delays Iran Sanctions While Persuading Israel Not To Attack 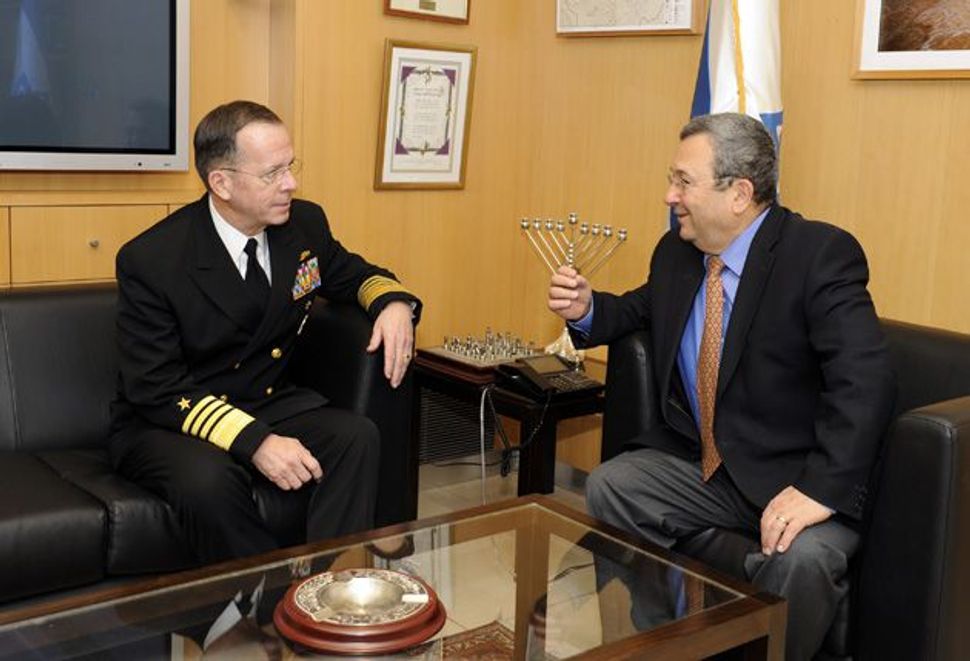 Cooperation: Ehud Barak meets on February 15 in Tel Aviv with the Chairman of the Joint Chiefs of Staff Admiral Michael G. Mullen at the Israel Defense Forces headquarters. Image by Getty Images

The United States is ramping up efforts to ensure that Israel does not surprise the world with a military attack on Iran as Washington extends its deadline for implementing stronger sanctions against the Islamic Republic.

Washington’s clear but delayed shift toward sanctions and away from dialogue promises a period of uncertainty; American officials now say that clarity on sanctions, both international and domestic, which was previously expected by February, will not be achieved until late April. Meanwhile, senior-level delegates have been traveling between Washington and Jerusalem, trying to reassure Israelis that sanctions against Iran are on their way, and seeking Israel’s willingness to put off thoughts of an airstrike aimed at Iran’s nuclear sites.

These talks demonstrate intimate defense cooperation between the two nations, but could also hint at a sense of concern within the Obama administration regarding the biggest wild card in the Iranian nuclear equation — Israel.

“Currently, the feeling in the U.S. is that you can no longer count on Israel to see the broader picture and you can no longer take Israel’s cooperation for granted,” said Yoram Peri, director of the Joseph and Alma Gildenhorn Institute for Israel Studies at the University of Maryland. “Israel’s politics became more extreme, and its sense of besiegement is stronger, and that gave power to more extreme voices in the country’s leadership.”

Highlighting the list of senior officials holding talks with Israel is Vice President Joe Biden, who will visit Jerusalem as part of his Middle East tour during the second week of March. Biden will be the most senior American official from the Obama administration to visit Israel so far. His trip tops several weeks of high-profile visits that have included Secretary of State Hillary Rodham Clinton, National Security Advisor Jim Jones and Admiral Michael Mullen, chairman of the Joint Chiefs of Staff.

Most of these officials kept their talks with Israelis behind closed doors. But Mullen took the unusual step of convening a press conference upon his arrival February 14 and sending a clear message to the Israeli public: An Israeli strike against Iran would “be a big, big, big problem for all of us, and I worry a great deal about the unintended consequences of a strike.”

Some visits, however, had a much lower profile. Such a trip was the one the CIA’s director, Leon Panetta, made to Israel in late January, and another was the visit of senior Israeli defense officials to Washington a week later. Israeli Defense Minister Ehud Barak will follow up on understandings reached in these talks when he arrives in Washington on February 25, and on talks by senior officials participating in the biannual meeting of joint Israeli-American strategic dialogue, which will take place the same day in Jerusalem.

“The main issue is coordination and exchange of views on Iran,” an Israeli diplomat briefed on the talks said. “It is mainly about sharing estimates and intelligence.”

But another official, based in Israel, said it is clear that both countries have also used these talks to shore up unwritten understandings regarding the way forward on Iran. The Israelis, according to the source, seem to have assured the United States that they have no intention of resorting to military action at the present time, and the Americans made clear they are moving at full speed to impose sanctions against the regime in Tehran.

Israel’s ambassador to the United Nations, Gabriela Shalev, described the possibility of an Israeli attack as “one of two bad options,” the other being Iran obtaining nuclear weapons. Speaking to reporters in Washington on February 16, Shalev did stress that a unilateral Israeli airstrike is not as bad an option as allowing Iran to go nuclear.

Clinton, in a clear sign of American shift to pressure from engagement, warned that Iran is turning into a military dictatorship. She called on Iranians to push back against the Revolutionary Guard — the forces that are also the target of American-led sanctions.

A United Nations resolution on international sanctions, previously expected to pass by the end of February, now seems to be moving on a slower track. U.N. sources point to April as the new deadline. During this period, the need for American coordination with Israel has become essential, because of concerns that Israel might attack if it feels that the international community is dragging its feet. Washington views such an action as detrimental to the entire drive to pressure Iran by using diplomatic and economic levers.

Last December, such war games were conducted by Washington’s Brookings Institution, the Belfer Center for Science and International Affairs at Harvard University and Tel Aviv’s Institute for National Security Studies. In analyzing the findings of these three games, Jeffrey White and Loring White from the Washington Institute for Near East Policy wrote that they “indicated that, as the nuclear issue escalates, dealing with Israel could become as big a challenge for the United States as dealing with Iran.” Because Israel is more willing than the United States to use military force, “an eventual U.S.-Israeli crisis is likely,” the analysts wrote.

If, indeed, a U.N. resolution on international sanctions is passed sometime in April, the decision will be in place in time for the Non-Proliferation Treaty Review Conference, scheduled for May.

But if by then the U.N. Security Council fails to reach an agreement on sanctions, the United States and likeminded countries are expected to bypass the international body and announce a list of sanctions that would not require U.N. approval.

Meanwhile, talks in Congress on completing legislation restricting sales of refined fuel to Iran are also advancing more slowly than expected. Both chambers adopted the bill with large majorities, but it is now up to the conference committee to reconcile the House and Senate versions into a final bill. The expected completion date for this legislative action is the new April deadline.

U.S. Delays Iran Sanctions While Persuading Israel Not To Attack