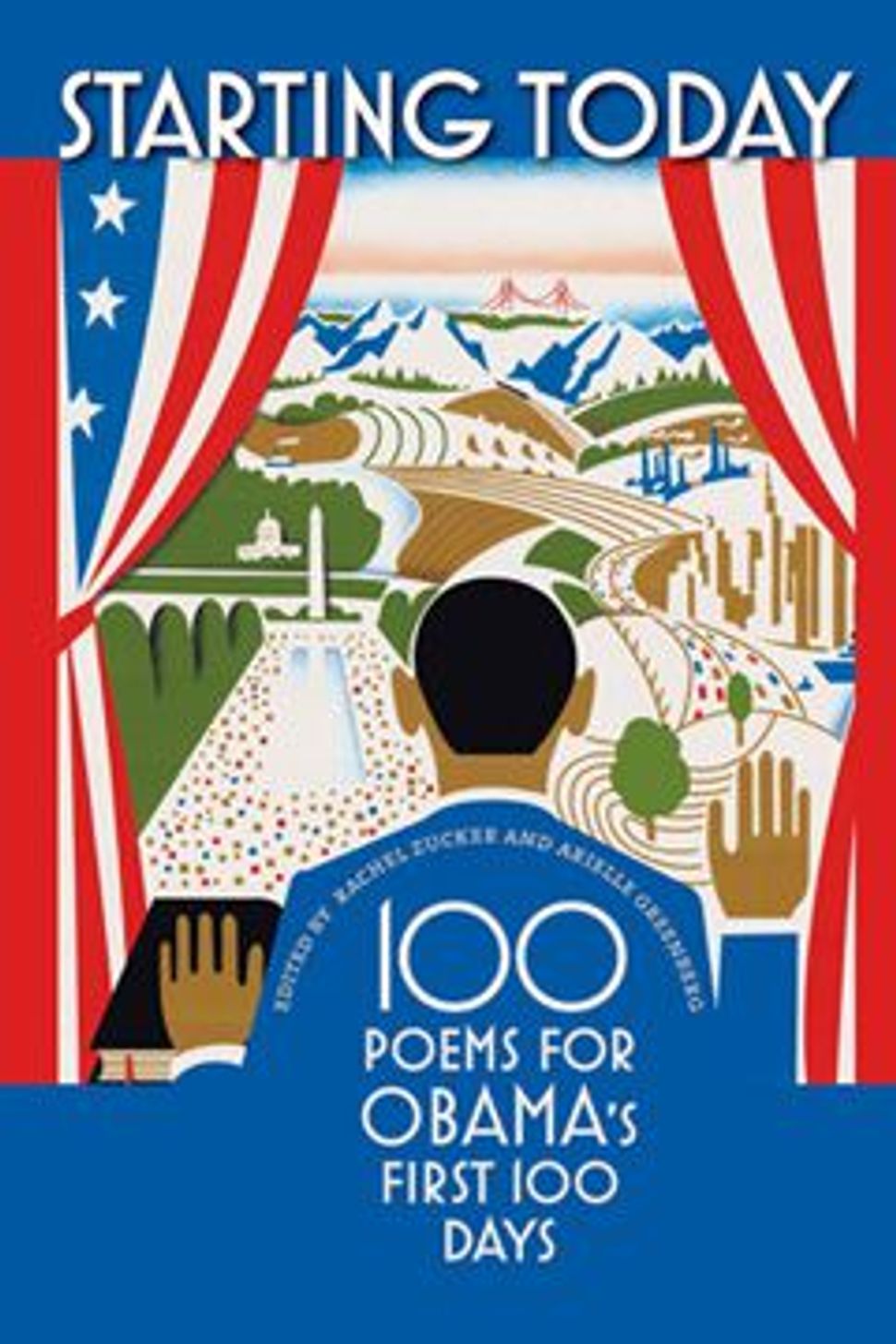 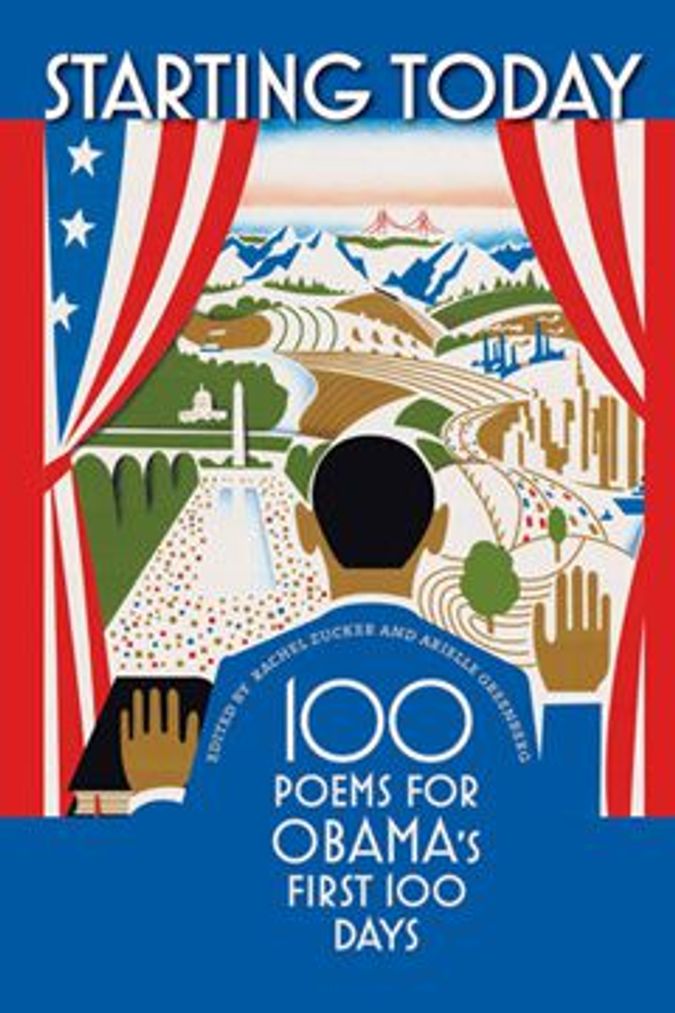 When President Kennedy uttered the now famous phrase “Ask not what your country can do for you — ask what you can do for your country,” during his inaugural address, America took him at his word. Almost 50 years later, when President Obama took office and stated, “Starting today, we must pick ourselves up, dust ourselves off and begin again the work of remaking America,” a more fragmented country interpreted and debated his words. Luckily, there were citizens who felt inspired to act, like the poets Arielle Greenberg and Rachel Zucker, albeit in their own unique way.

With a wink and a nod to Obama’s community organizing and noted love for writing and reading poetry — be it in English or Urdu — Greenberg and Zucker sent out a call to colleagues, friends and poets they admire to pen poems chronicling the first 100 days of Obama’s presidency. Each of the poets was randomly assigned a day, with the task of writing a poem that reflected the country’s political climate during the 24-hour period before (or during) his or her assigned day.

The duo posted a new poem every day for 100 days on their blog, 100dayspoems.blogspot.com. They then turned this social experiment into an anthology, “Starting Today: 100 Poems for Obama’s First 100 Days,” which will hit stores in April. The 210-page paperback includes a foreword by Pulitzer Prize winning poet laureate Rita Dove, an excerpt from Elizabeth Alexander’s inaugural poem and a poem each from the editors, Zucker and Greenberg.

The 97 other contributors range from graduate students to more decorated poets, like David Lehman, editor of “The Best American Poetry” book series; Elizabeth Scanlon, editor of The American Poetry Review, and Catherine Barnett, a Guggenheim fellow and Pushcart Prize winner.

The poets range in their artistic style, experience and background, but they don’t include the modern wave of such urban beat poets as Kahlil Almustafa, who recently published his own version, “From Auction Block to Oval Office: 100 Poems in 100 Days of Obama’s Presidency” (MVMT Publishing). A couple of the poets mention their religion or faith, and according to the editor, about seven of the 100 poets are Jewish, including both editors. Zucker says that while she is not religious, “being Jewish is always part of my thinking and part of my cultural identity in my writing, in my world view.”

“Starting Today” is as much an exercise in blogging and community activism as it is a compilation of edited work. It’s admirable that Zucker and Greenberg experimented with adapting an old art form to new media, but it’s not always clear what the added benefit of returning to old media — taking the Web site to print form — provides.

Aside from the foreword, there isn’t added material. The 100 writers don’t reflect on their initial poems, nor do the editors preface the day’s poems with an explanation of the current events. There are individual writers who provide some context, like Patricia Spears Jones, who on day 54 describes a man who drowned himself by including a quote from a police chief. The editors and publisher don’t reveal what’s at stake for the book as a whole, one that asks a reader to pay $20 for something they could read for free.

Thus the book feels unfinished or narrow in scope; specific to the author’s individual experience, and not like a snapshot of the collective experience at the time. Such is the case with Diane Wald’s poem, “A Nonromantic Obama Valentine for America.” Her description of her adulation for Obama’s camera-friendly, seeming authenticity and happiness is well-measured and well-written, but the fawning feels dated, like yesterday’s news, which it is.

There are individual poems that merit being published so that they can be read again and again. “Starting Today” includes a dozen fine works that could have been written on any day, that stand on their own. On day 21, Michael Dumanis reflects on the residue left by the old guard and his — and America’s own contribution to — overconsumption. When it comes to the task at hand, Dumanis, writing about the current political climate, washes his hands and writes, “I have nothing to say about the new president.” Other poets provide an original, clever take on our unending fascination with the president’s family. On day 69, Elizabeth Hughey describes in a poem titled “The I Love You Bridge” how the Beatles’ song “Michelle” “happened” to come out a year after first lady Michelle Obama was born.

There are poems that are accessible and finely crafted so that they will grab all readers, even those that typically shy away, such as Thomas Sayers Ellis’s poem, “First Grade, All Over Again” for day 100.

Ann Fisher-Wirth’s piece for day 48, “In Oxford, Mississippi,” paints a profound picture with beautiful lines, like: “Grief has been our mother. Exhaustion and lies, our daily bread.” Her understated description of assisting an 82-year-old African-American Southern man in registering to vote for the first time provides a complex picture of the “proverbial marriage” of a people to their president.

The honeymoon may be over, but remembering what it meant and felt like may help us through the hard times. “Starting Today” is like a photo album of relatives — some of whom you will recognize, others whom you didn’t miss and several whom you are lucky to learn about, even in retrospect.

Catie Lazarus is a writer. Her talk show on jobs, “Employee of the Month,” debuts on March 17 at 92Y Tribeca in New York.

Dear Mr. President, I Thought You Should Know

It’s February and the wind’s so bitter

my toddler, in the front pack, slides his hands

under my armpits and buries his face in my scarf.

I’m sorry to report that some people are still nasty

on the number 1 subway and my son’s teacher

has acute leukemia. I don’t expect you to change

everything or for everything to change. But every day

it does. My older boys, with their heavy school bags,

struggle to remain standing as we jolt along

these old, old tracks. Someone offers me a seat

but I can’t reach it. Someone else won’t let me past.

Later, I’ll nurse the baby, write some poems, and wait

to hear if the swab I twirled inside my cheek predicts

my bone marrow might save anyone. Until then, I’m held

upright by the press of your citizens, the city’s embrace.