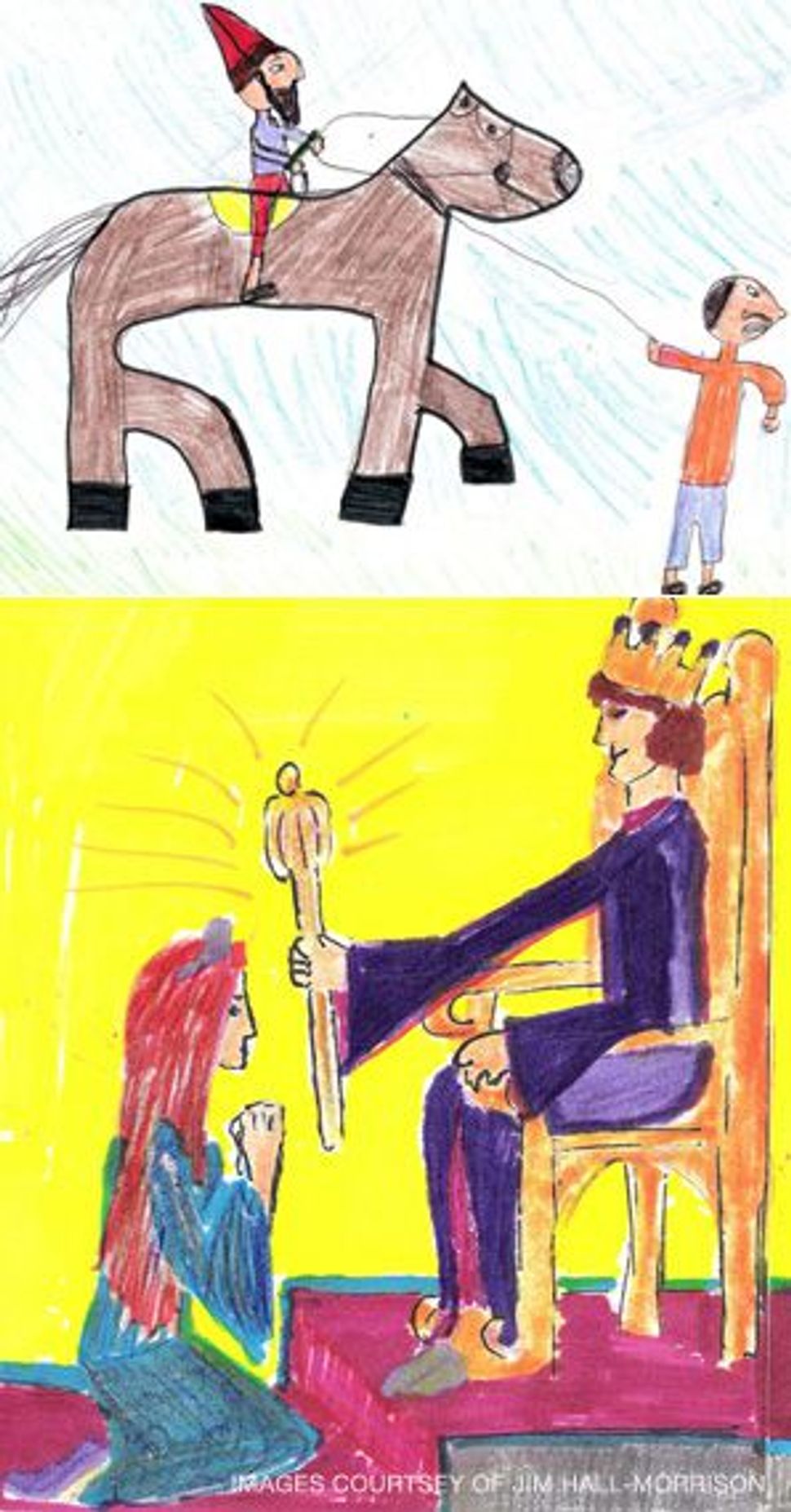 Biblical Scenes: A drawing by Jessica Berson shows Haman leading Mordechai through the streets (top left), and a work by Ashley Fisher-Tannenbaum depicts Esther going to the King.

The Scroll of Esther is getting a makeover from some kids in Pennsylvania, a Reconstructionist scribe and a computer graphics program. 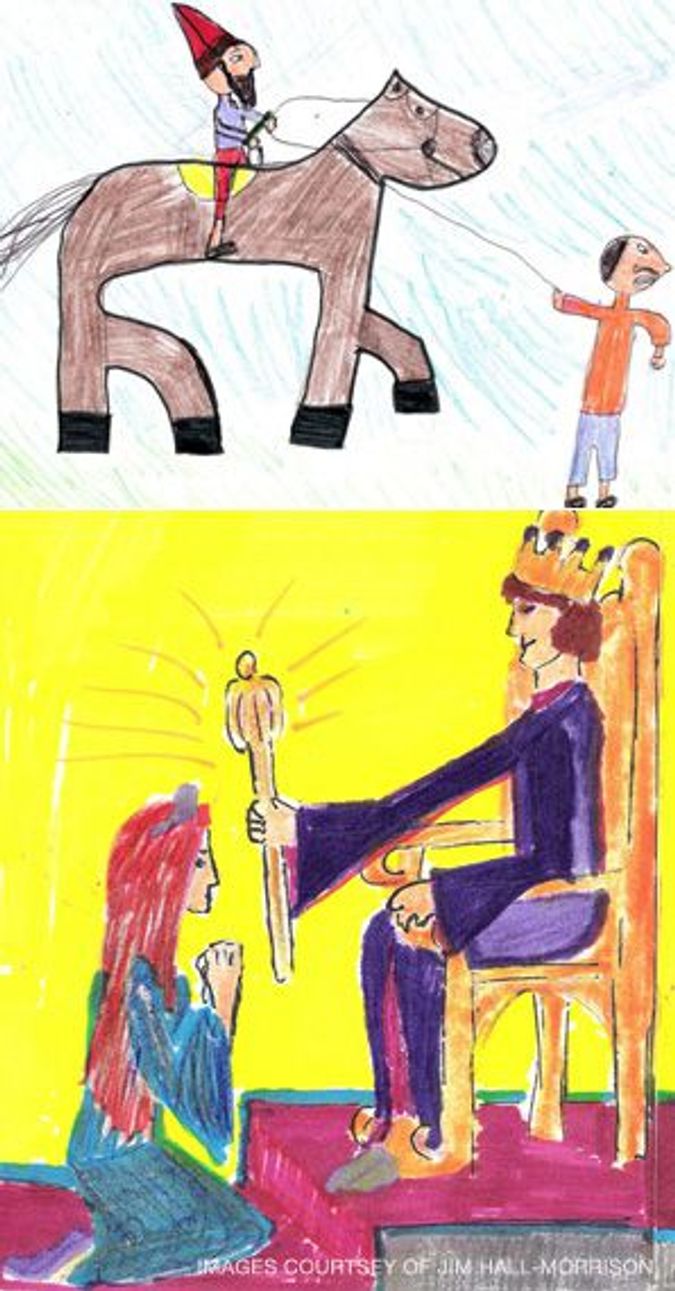 Biblical Scenes: A drawing by Jessica Berson shows Haman leading Mordechai through the streets (top left), and a work by Ashley Fisher-Tannenbaum depicts Esther going to the King. 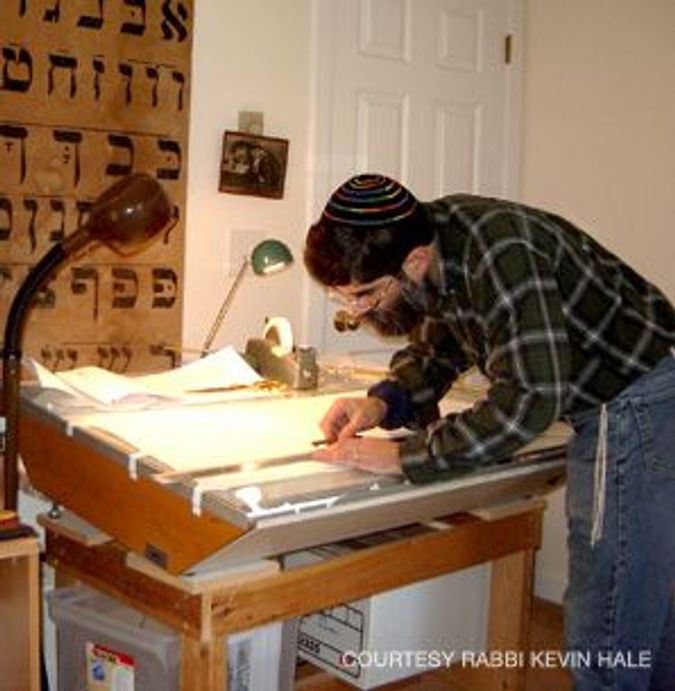 Scribe: Rabbi Kevin Hale was commissioned to create the megillah.

Congregation Or Hadash, a small Reconstructionist synagogue located in the Philadelphia suburb Fort Washington, has commissioned a sofer to create a megillah that incorporates drawings by students in its religious school. The scribe, Rabbi Kevin Hale, used a computer program to graft the children’s images onto fine rice paper that was then affixed to parchment.

“We are creating the first truly Reconstructionist megillah,” said Rabbi Joshua Waxman, who leads Or Hadash. (To boot, Hale is the first ordained Reconstructionist sofer.) “It’s a kosher scroll, and we use the traditional text, but we engage with it and try to inject our own voices into it and experience it as something fresh.”

The megillah project was conceived partly as a celebration of the congregation’s 25th birthday. But Waxman was adamant that it would not be an ordinary present.

“It’s easy to commission something,” Waxman said. “It would have been easy to make a few phone calls to our more generous donors, but instead we invited everyone to help underwrite it for $1.80 a letter. I find it faintly distasteful when synagogues virtually auction off ritual items — you know, ‘You, too, can own the Song of the Sea for $15,000.’”

To Waxman and some of his congregants, it also seemed too easy to let a sofer do all the work. So, religious-school students were encouraged to submit illustrations of scenes from the Purim story, including “Vashti saying ‘no,’” “Mordechai at the gate refusing to bow down,” and “Haman being led to the stake.”

The result, a range of 20 colorful drawings by artists between the ages of 5 and 14 was compiled by Hale and grafted onto parchment next to the appropriate portions of text.

Further enlivening the text, Hale inscribed the names of key characters of the story in different colors. Haman’s name — which, Waxman pointed out, is often set aside in traditional megillot to give cantors a chance to work up the contempt with which they must utter it — is in red; Esther’s is in green, and Mordechai’s is in blue.

Despite the unusual features of this megillah, those involved with its production say that it’s kosher.

“The rules for writing a kosher scroll are more flexible in this case, because nowhere in the megillah is the name of God mentioned,” said Gail Morrison-Hall, an art teacher and Or Hadash member who coordinated the scroll-making project.

The scroll was set to be unveiled at a celebration at the synagogue March 16, four days before Purim. Hale, who lives in Leeds, Mass., was slated to be on hand to teach a crash course in scroll-writing for the congregation’s kids.

“Who knows, maybe it will inspire a future scribe,” Waxman said.