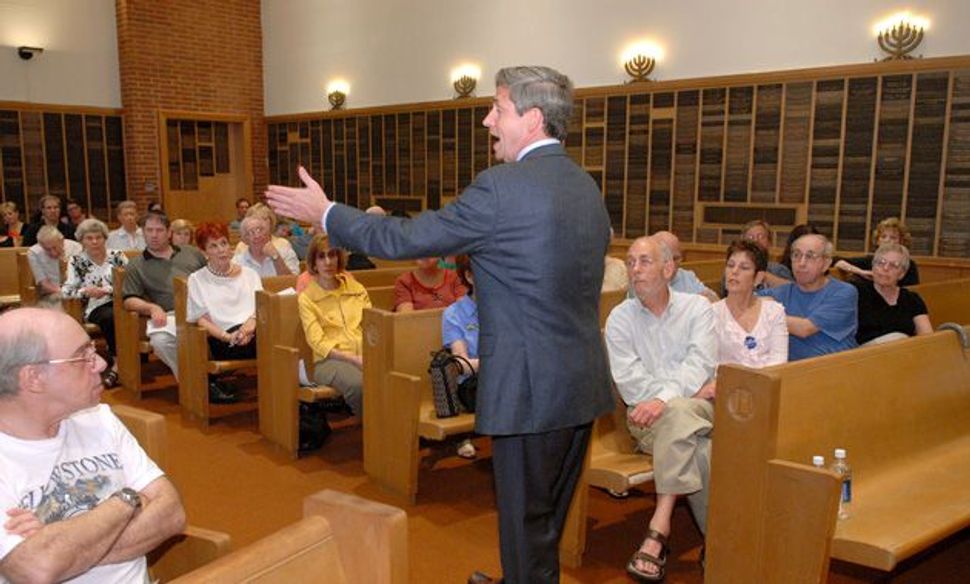 Seeking The Jewish Vote: Joe Sestak speaks at a synagogue forum on May 2 at Keneseth Israel Reform Synagogue in Elkins Park, a suburb of Philadelphia. Image by PETER TOBIA

Two self-described pro-Israel groups are trading barbs and pointed advertisements in a dispute over the record of Rep. Joe Sestak, the Democratic candidate for Senate in Pennsylvania.

The dueling advertisements, sponsored by the left-wing group J Street and a new right-wing group called the Emergency Committee for Israel, present diverging views of Sestak’s positions on Israel.

Meanwhile, the two groups are targeting each other in a secondary dispute over which organization best represents the interests of Israel.

“We absolutely welcome this debate,” said conservative writer Michael Goldfarb, an adviser to the committee.

Sestak, a former U.S. Navy admiral and two-term congressman, defeated Senator Arlen Specter in a heated Democratic primary in May. Polls show Sestak in a tight race with his opponent, former Republican Rep. Pat Toomey, in the November 2 general election.

J Street has invested heavily in the Pennsylvania race. According to a spokesman, the group has raised about $75,000 through its affiliated PAC for Sestak’s campaign, more than it has raised for any other candidate nationwide.

“I think he’s going to win the Jewish vote by a healthy margin, so turnout — Jewish voters getting motivated and getting out — is only to the benefit of Joe Sestak,” said Mark Aronchick, a Philadelphia attorney and Sestak supporter who has long been active in Jewish communal leadership and on Democratic political campaigns.

In unveiling the Emergency Committee for Israel and its ad targeting Sestak in early July, the committee’s leaders took thinly veiled swipes at J Street. A story on the website Politico, announcing the creation of the committee, quoted board mem- ber William Kristol, a prominent neoconservative and editor of The Weekly Standard, calling his new group “the pro-Israel wing of the pro-Israel community.”

The committee’s ad, which first aired on July 13, asked, “Does Congressman Joe Sestak understand Israel is America’s ally?” implying that he does not. The spot aired on Fox and CNN and during a cable transmission of a Philadelphia Phillies baseball game, and will air on broadcast television during a Phillies game July 23. It will air through July 27.

J Street’s response, an ad posted July 20 on YouTube and slated to air throughout Pennsylvania on morning shows, late-night shows and weekend news shows, captions a clip of the committee’s spot as a “Negative ad by far-right group.” The narration also refers to the committee’s ad as being a product of the “far-right.”

“The positions that this group supports are quite obviously not far right,” Goldfarb said of the organization he represents. “They’re quite clearly sort of right in the middle of where Americans are. I think it’s quite clear that if anything, it’s the views that Rep. Sestak has that are outside the mainstream.”

Those views are still somewhat unclear: An “Issues” tab on the group’s 2-week-old website leads to a blank page. But Goldfarb said that the “emergency” referred to in the group’s title was twofold: “One, Iran…. And two, we have an administration that has sort of veered a little wildly from one extreme to another, but regardless of where they are at any given moment, there is a real concern among supporters of Israel that this administration doesn’t quite get it, that their policies have been counterproductive to their goals.”

On July 19, the Sestak campaign held a news conference in Philadelphia in which Pennsylvania Jewish leaders expressed support for Sestak. Based on quotes from speeches at the conference, supplied by the Sestak campaign, it appeared that the campaign was endeavoring to play down the role of Israel in the race, while shoring up Sestak’s pro-Israel credibility.

“Joe Sestak is rock solid on Israel,” Aronchick said at the rally. “I will go to sleep at night restful, in peace, knowing that Joe Sestak is making decisions that affect in a positive way the security and the future of the State of Israel.”

“It should not be allowed to become a divisive issue,” said Burt Siegel, former executive director of Greater Philadelphia’s Jewish Community Relations Council. “It serves Israel no good, and it serves America no good.”

The committee’s ad claims that Sestak raised funds for the Council on American-Islamic Relations, which it calls “an anti-Israel organization the FBI called a front-group for Hamas.” It also accuses Sestak of signing a letter that termed the blockade of Gaza “collective punishment,” and of declining to sign a letter “affirming U.S. support for Israel.”

In a letter from a lawyer for the Sestak campaign, posted online by Politico, the campaign denied that Sestak raised money for CAIR; disputed the characterization of CAIR as a front-group for Hamas; claimed that the committee was misconstruing the letter on the blockade; and said that the focus on Sestak not signing the particular letter on support for Israel was misleading and deceptive.

J Street’s response advertisement points to Sestak’s votes supporting aid to Israel and to his work while in the Navy, when the ad claims he “helped strengthen Israel’s defenses.”

“As a former three-star admiral who directly participated in the defense of Israel, Joe Sestak’s commitment to Israel’s security is beyond question,” said Jonathan Dworkin, Sestak’s press secretary.