Wedding Blues: Rabbis at Odds With Their Rules 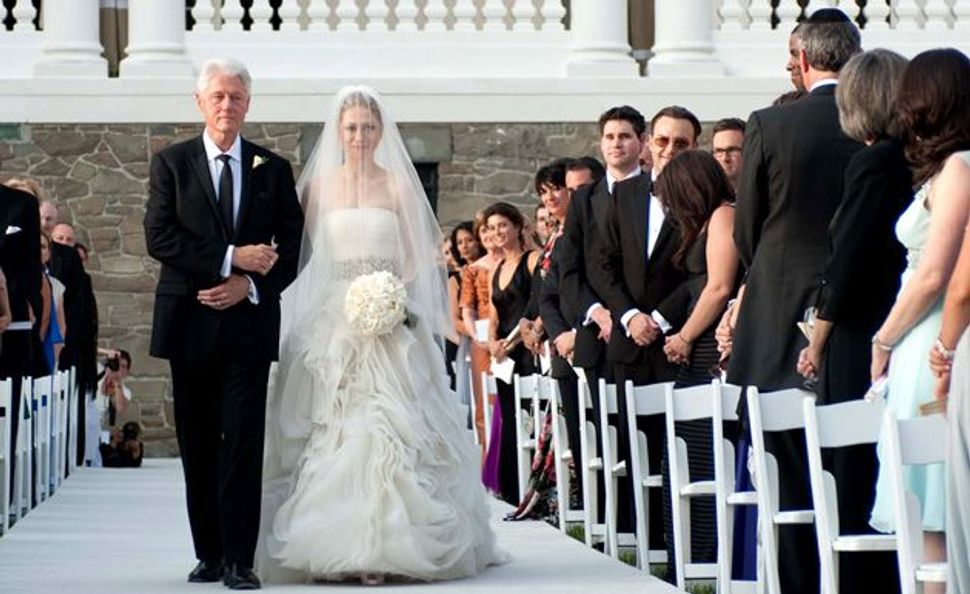 Interfaith Ceremony: Chelsea Clinton and former President Bill Clinton walk down the aisle during her Sabbath day wedding. Among the guests was a man (on right, back to camera) who wore a yarmulke. Image by GETTY IMAGES

The so-called wedding of the century featured a ketubah, a chupah, a groom wearing a tallis and yarmulke, a crushed glass at the end of the ceremony and both sets of parents being hoisted up in chairs as guests danced the hora.

But despite the wedding’s Jewish symbols, top leaders from all the major streams of Judaism — Reform, Conservative, Orthodox and Reconstructionist — were at pains to stress that the Sabbath day nuptials of Chelsea Clinton and Marc Mezvinsky were not a Jewish event.

A Methodist minister co-officiated the wedding ceremony with Reform Rabbi James Ponet, the Jewish chaplain of Yale University, though reports on the ceremony contained nary a word about any exclusive Christian content.

Ponet’s own rabbinic organization criticized his involvement in the event. But Conservative Jewish leaders were less ready to negatively judge the decision of the chancellor of Jewish Theological Seminary, the movement’s flagship institution for ordaining rabbis, to attend the wedding reception.

In many ways, the reactions of rabbinic leaders to the event’s Jewish complexities offered a window on their movements’ struggles to engage the increasingly common phenomenon of the interfaith wedding.

According to an official statement emailed in response to a query from the Forward, JTS Chancellor Arnold Eisen did not attend the ceremony itself, which took place during the Sabbath, a violation of traditional Jewish practice. The reception took place in the evening, after the end of the Sabbath. Eisen was invited as a result of his friendship with the couple, which began when they were his students at Stanford University.

Rabbi Ellen Weinberg Dreyfus, president of the Central Conference of American Rabbis, which is the Reform movement’s official rabbinic association, termed Ponet’s participation in the ceremony a clear violation of the association’s rules, specifically its bar against rabbis co-officiating with non-Jewish clergy and conducting a wedding during the Sabbath.

Rabbi Eric Yoffie, president of the Union for Reform Judaism, couldn’t foresee any action being taken against Ponet, who could not be reached for comment.

“We accept the autonomy of the rabbi,” Yoffie said. “Generally speaking, we understand the rabbi has the right to make [his] own choice. Someone could bring him up on charges, but I don’t think it would happen.”

According to Yoffie and Dreyfus, this “live and let live” practice has been largely adopted among Reform rabbis, despite a 1982 resolution reconfirming the CCAR’s opposition to co-officiation of wedding ceremonies with non-Jewish clergy and holding wedding ceremonies on the Sabbath, and a March CCAR task force report reaffirming this.

Dreyfus said the policy has not been enforced and that she doesn’t know of any instances in which disobedient rabbis were reprimanded. Of the Clinton-Mezvinsky marriage, she stated in an e-mail to the Forward that “there are those who would question whether this is ‘a Jewish marriage’ because one partner is not Jewish. The CCAR does not have answers to that question.”

Conservative Judaism, however, does. Rabbi Steven Wernick, executive vice president and CEO of the United Synagogue of Conservative Judaism, stressed, “A Jewish marriage is a marriage between two Jews. If you’re not obligated to the laws of Moses in Israel, you can’t commit yourself to each other in that way.”

In the Rabbinic Assembly, this principle is reflected in a rule stating that rabbis “may not officiate at, participate in or attend an intermarriage,” the R.A.’s executive vice president, Rabbi Julie Schonfeld, wrote in an e-mail. She said the question of a Conservative rabbi attending an interfaith wedding reception after the religious ceremony “has not arisen formally.” Eisen, the JTS chancellor who attended the Clinton-Mezvinsky reception, is not a rabbi but is seen as a role model. Nevertheless, Conservative scholars interviewed by the Forward did not criticize his decision.

“Arnie was walking a fine line,” said one rabbinic scholar who has been involved with developing rabbinic standards on this issue. “He was in a tough place as a family friend and mentor to this young couple. He also wanted to show respect to those in power in our government.”

Rabbi Morris Faierstein, a retired military chaplain, said that, having received his invitation, Eisen’s attendance might be seen as a grey area under longstanding tradition, which enjoins one to show “special deference” to a king or head of state — in this case the former president or his spouse, the sitting secretary of state. “I can see why the normal rules might be bent somewhat on this occasion,” Faierstein said.

Rabbi Susan Grossman, spiritual leader of Beth Shalom, in Columbia, Md., said, “[Queen] Esther certainly married someone who wasn’t Jewish, and that worked out all right. I hope this is the case for Chelsea’s husband. The Clintons have been great friends to Israel and to Jews in general.”

In his work with Interfaithfamily.com, which offers, among other things, a clergy referral service, CEO Ed Case sees a disconnect between rabbis who feel they can navigate the interfaith issue without offending interfaith couples and those particular couples’ experience of interacting with rabbis who won’t perform or recognize interfaith unions.

“For better or for worse, what couples want and what lay people want are different than where the rabbinate is. People don’t feel bound by requirements or traditions, and they want to do what they want to do,” he said.

Laurie Stern contributed to this article.

Wedding Blues: Rabbis at Odds With Their Rules