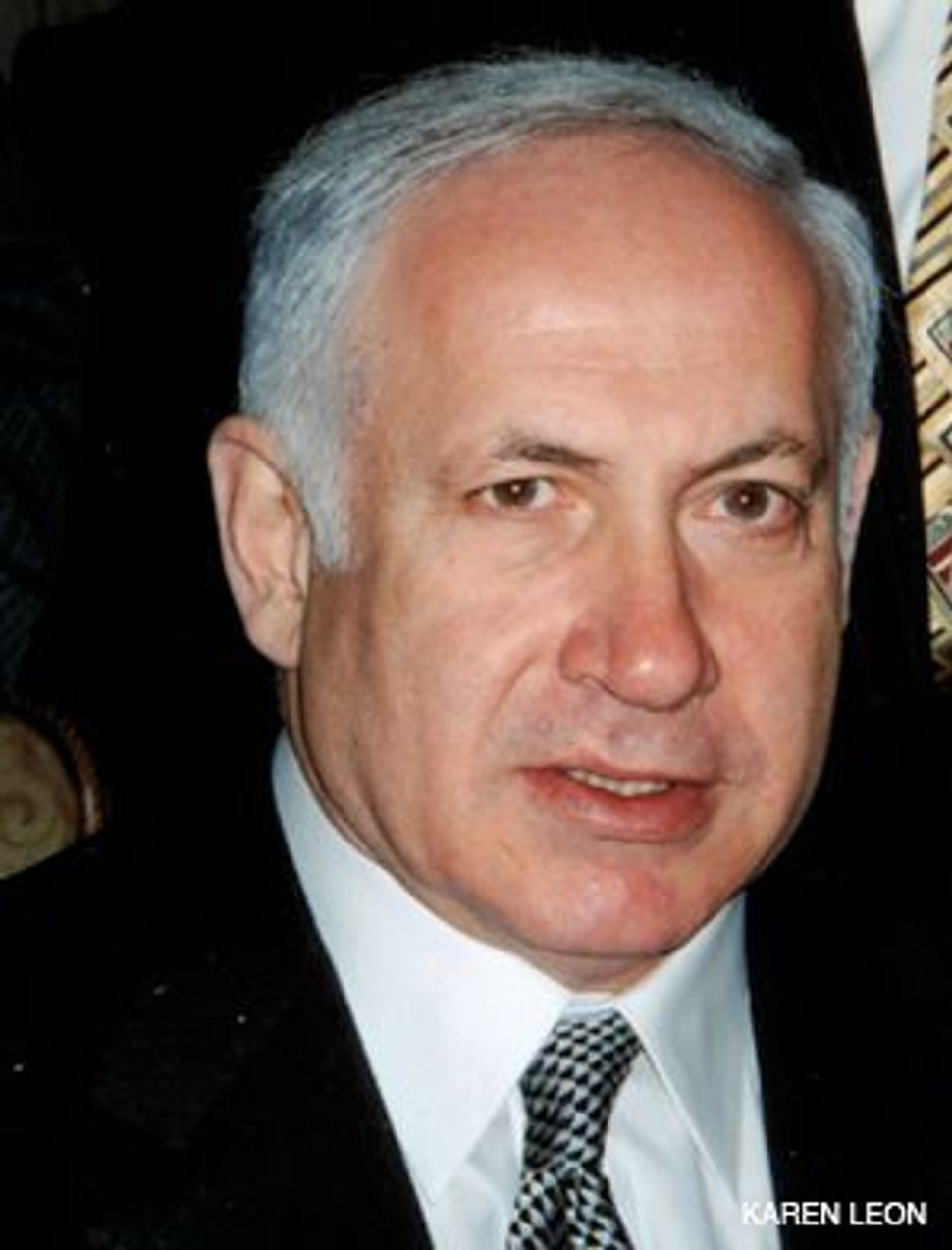 Netanyahu: Spoke at the event. 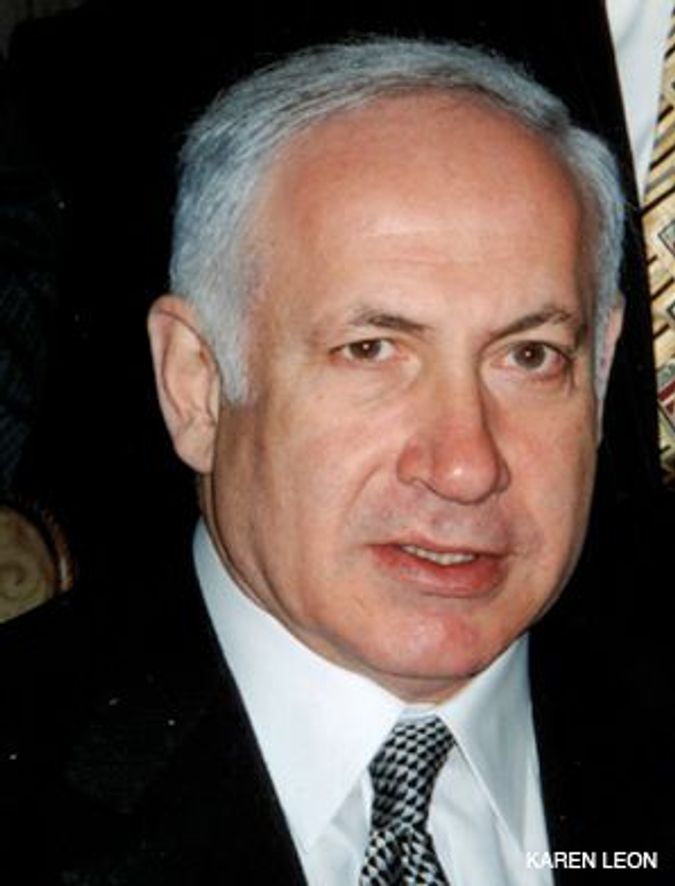 Netanyahu: Spoke at the event.

“I’ve come here to say todah rabah, thank you,” said Benjamin “Bibi” Netanyahu, addressing **Elliott Broidy, recipient of the Raoul Wallenberg Award at Gateway’s February 27 anniversary gala at the Waldorf-Astoria. Likud member and Israel’s former prime minister, Netanyahu declared: “We stand in the way of a militant Islamic caliphate.… Our policy is, Iran does not get nuclear weapons… I told [President Bush], ‘This has been our city for thousands of years… we will not give it up.… The future of the Jewish people depends on the Jewish state.… History will not give us another chance.”

He told the 800 guests: “Elliott came to me at the nadir of [Israel’s] economy and told me, ‘I am starting an [investment fund for Israel].’” It was during the second intifada, in 2002, which threatened Israel’s economic security. Broidy, chairman of Markstone Capital Group, helped raise $800 million for investment in Israel. He serves on the United States Homeland Security Advisory Council and is a member of the board of trustees of the John F. Kennedy Center for the Performing Arts, and is also active at the Jewish Federation of Los Angeles and at Hebrew Union College. In 2005, at the University of Southern California, he created a scholarship program to benefit Israeli doctoral candidates from either The Technion or the Weizmann Institute.

Mordechai Suchard, founder and director of Gateways — whose imperative is to “Stem assimilation and the tide of intermarriage” — joined with Rachel Oestreicher-Bernheim, chair of the Raoul Wallenberg Committee of the United States, in presenting the award to Broidy. “Raoul Wallenberg has done more for Jewish continuity than almost anyone else, saving more than 100,000 [Hungarian] Jews,” Suchard said. (Among those he rescued was Rep. Tom Lantos, California Democrat and chairman of the House Foreign Affairs Committee. Lantos, who died February 11, was the only Holocaust survivor to serve in Congress.) Past recipients of the Wallenberg Award include Ross Perot, Miep Gies, Senator Elizabeth Dole, Alan Greenberg and Harvey Meyerhoff.

My most recent encounter with just resigned New York State governor Eliot Spitzer was at the November 14, 2007, Intrepid Sea, Air & Space Museum “Salute to Freedom” gala at the New York Hilton. After a standing ovation, Spitzer, recipient of the Intrepid Freedom Award, offered a brief “thank you” acceptance speech but spent little time mingling. He was more affable February 10, 2005, when he addressed the Blackberry-focused, watch-checking, cell-phone addicted crowd at the Hedge Funds Cares fundraiser at the New York Marriott Marquis. Noting that he was often introduced as Aaron Burr — an allusion to New York State’s 1784-1791 attorney general, who fatally wounded Alexander Hamilton in the infamous 1804 duel — an acerbic Spitzer joshed: “If you think I’m tough, [then] choose your weapon.” Deftly, Spitzer thrust and parried one-liners: “Don’t need to leave your Social Security numbers at the door. We already have them.… Under every third seat there is a subpoena.” Spitzer underscored the need for a “Wall Street with integrity… .Those who object to our actions.… trying to protect the status quo… do not serve us all.” The dinner was scheduled for a nonnegotiable 5:30 p.m. to 8:30 p.m. At Spitzer’s final words, by 8:31, the room looked like one of those television lottery ads with everyone racing for the exit doors.

In the September 24, 2007, U.S. News & World Report interview, documentary filmmaker Ken Burns (World War II epic “The War”) states: “I’m in the memory business, and each time a person dies, it’s a whole library of memories that leave.” Can’t think of a more apt way to describe Abraham Brumberg, who died at 81 and whose obituary heading in the February 7 New York Times described him as “Writer on Eastern Europe.” There are, have been and will be many writers on Eastern Europe. But there never will be another “eyewitness” like Amik. In his 2007 autobiography, “Journeys Through Vanishing Worlds” (SCARITH-New Academia Publishing), he laments: “What remains of the many vanishing worlds that once engaged me so feverishly? Not much. The Bund is gone. So is the Poland I knew. Yiddish has virtually disappeared. Sovietology is a thing of the past…”

Brumberg was born in Hadassah Hospital in Tel Aviv (ergo Amik for Am — Hebrew for people). Finding anti-Bundist, anti-Yiddish Palestine unpalatable, in 1929 the family returned to Poland, where Brumberg’s father became director of the Bund’s progressive in both medical-physical structure and cultural environment Medem Sanatorium in Miedzeszyn (to which my parents sent me in the summer). (This children’s summer camp was immortalized in the film “Mir Kumen On” (“We Are on the Way”) parts of which appear in Josh Waletzky’s masterful film “Image Before My Eyes”). Amik attended the Khmurner Shule on Krochmalna Street (made famous by Isaac Bashevis Singer), as did I. With the war’s outbreak, he and his parents managed to make their way to Vilna in September 1939. My mother and I fled Nazi-occupied Warsaw, eventually arriving in Vilna in January 1940. In August 1940, my father was arrested by the NKVD and shared a prison cell with Menachem Begin in Vilna’s Lukishky prison.) On different levels, we both attended Vilna’s real gymnasium, where all instruction — even math and science — was in Yiddish. Amik and his parents and my mother and I — Sugihara visa recipients — traveled on the same train to Vladivostok from Moscow; on the same Japanese fishing trawler to Tsuruga, and then on the same train to Kobe, Japan, where Amik — several years older than I — along with Joseph Mlotek (father of Folksbiene’s Zalmen Mlotek) organized a birthday party for me. The Brumbergs left for America in 1941, but my mother and I did not get to New York till 1946. I met up with Amik at the YIVO Institute for Jewish Research. We were members of the youth group Hemschekh (The Future), which included Uriel Weinreich (author of the Yiddish-English/English-Yiddish Dictionary), Gabby Weinreich and Mendl Hoffman (late husband of playwright Miriam Hoffman and father of actor Avi Hoffman). Amik and the Weinreich brothers wrote parodies and musical comedies in Yiddish, in which we performed. Amik was the all around régisseur. For a brief moment in time, it seemed as if the ethos of Yiddish Warsaw, Vilna and the Medem Sanatorium was still flickering. Both his parents and mine died and are buried next to one another in the Workmen’s Circle/Arbeter Ring cemetery. Someone joshed that they are still debating prewar Yiddish issues with one another. Brumberg moved to Washington and became editor in chief of Problems of Communism, which was published by the U.S. Information Agency. Whenever my husband, Joe, and I were in Washington, we would ALL meet for dinner. He got to ventilate his Yiddish, and told us of his lectures and writings and his spin on the Soviet landscape. In a December 5, 1985, letter (in English — usually he wrote to me in Yiddish) he informs: “I was attacked numerous times in the Soviet press for my dastardly anti-Soviet activities, and in ’69 I was singled out by Rude Pravo and Pravda as the man responsible for the ’68 “counterrevolution” in Czechoslovakia.” In the letter, he mentions his album “My Darling Party Line.”

Next to politics and writing, he loved nothing more than singing Yiddish songs. As part of its 60th anniversary celebration in 1985, YIVO sponsored a series of events, including a gem of a program, “Yiddish Songs of the Underworld,” performed by none other than Abraham Amik Brumberg, who was once chairman of the Yiddish Youth Federation and co-editor with Uriel Weinreich of the now-defunct Tsukunft (Future). His program dealt with the “substratum of the Jewish underworld” and, as he explained, dealt with criminals who hijacked shipments of merchandise from moving vehicles, second-story thieves, pickpockets who worked in teams, “diamond window cutters, pimps and the women who loved them.” Some of the songs are included in his 1979 record “Lovers, Dreamers and Thieves” (which I am told is still available). Brumberg’s articles appeared in The New York Times, The Washington Post, The Economist and The New Republic. He wanted both Jewish and Polish historians “to try to confront their own myths and to examine the painful and complex question of the Polish Jews in a spirit of rigorous objectivity.” He criticized Poles for trying to rationalize Polish antisemitism, as well as Jews who “hold the entire Polish nation to be antisemitic.”

There is no one else left with whom I can revisit that time, that place, that ethos — in Yiddish or English. Abraham Amik Brumberg was, in a way, the last of the Yiddishist Mohicans who experienced what others in the future will find only in archives or memoirs. On March 12, I was devastated to learn of the death of his wife, Josephine Woll, that day, after a long illness. We had spoken the week before, and she told me she’d just sent me recent photos of Amik.