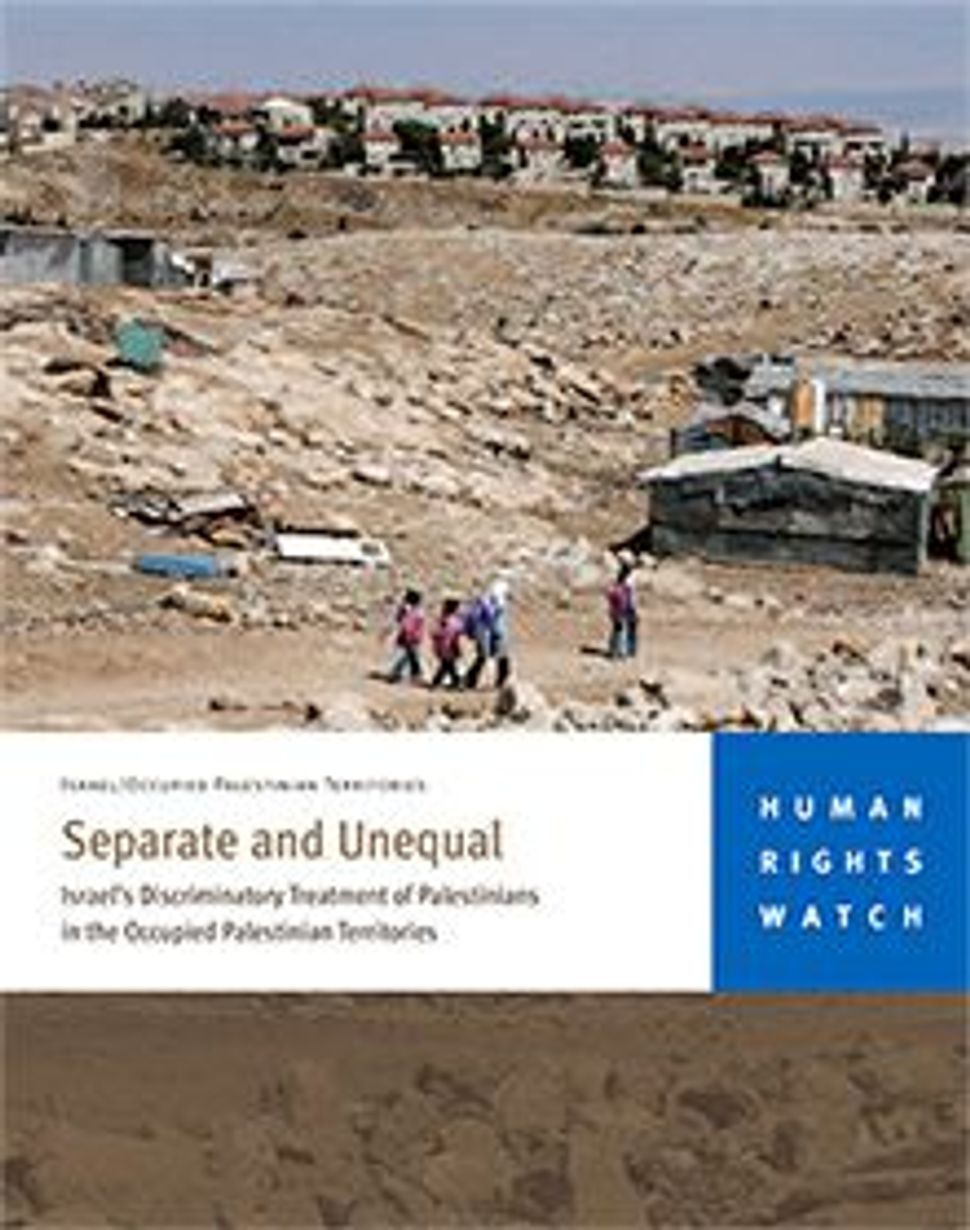 For the first time, a Human Rights Watch report on the West Bank is calling on businesses to withdraw from there if they find themselves part of what the study describes as a “two-tier system of laws, rules and services” that favors Jewish settlers at the expense of Palestinians.

This is a new move for the organization, whose officials acknowledged that the recommendation shared some unintentional “overlap” with the movement to boycott, divest and sanction Israel, or BDS, as the campaign is known. 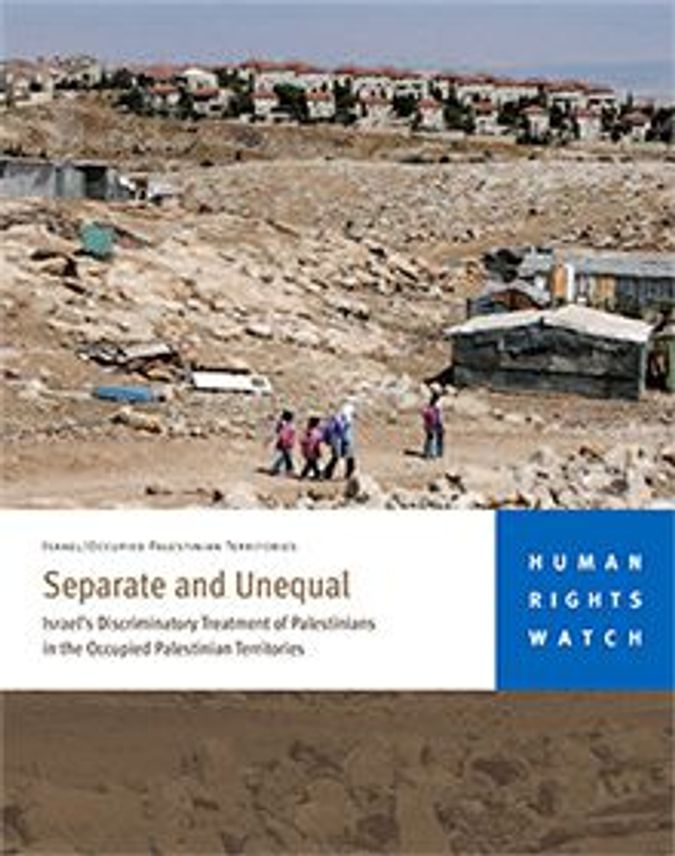 “The overlap is not 100%, not by a long shot,” said Bill Van Esveld, the lead author of the report. He stressed that HRW was singling out specific instances of human rights violations on the West Bank and asking businesses to consider if they may be implicated in them and act accordingly — a move the group has taken, he noted, with other countries.

“We are not interested in anything to do with the delegitimization campaign or targeting anything that is going on within Israel,” Van Esveld said. The human rights group was not calling for any consumer boycotts or divestment campaigns, he emphasized.

Israeli leaders nevertheless acted quickly to denounce the report, released December 19, even as leaders of the BDS campaign welcomed it.

Israeli Prime Minister Benjamin Netanyahu, speaking on the day of the report’s release, blasted human rights groups such as HRW as hypocritical for turning “a blind eye to the most repressive regimes in the world, regimes that stone women and hang gays,” while targeting “the only liberal democracy in the Middle East.”

HRW’s program director, Iain Levine, countered that the group frequently and continually targets the kinds of regimes and atrocities that Netanyahu singled out, including issuing a report that dealt with violence committed against sexual minorities in Iran, released just four days before the one on the West Bank. Levine said, “The prime minister’s advisers really ought to check HRW’s website before making such statements.”

Omar Barghouti, a chief architect of BDS, wrote in an e-mail that while the HRW recommendations “cannot be accurately considered part of BDS, the global BDS movement views [them] as another significant victory for the logic of sanctions and effective pressure against Israel as necessary measures needed to end its illegal occupation, colonization and apartheid.”

The 166-page report, titled “Separate and Unequal,” details what it calls “different treatment” in the West Bank for Palestinians and Israeli-Jewish settlers. It describes, for example, large disparities in access to water, offering stark facts, such as that the 9,000 settlers living in the Jordan Valley use one-quarter the total amount of water consumed by the entire Palestinian population of the West Bank, some 2.5 million people.

The report cites the water situation in the northern Jordan Valley village of Bardala, among other cases. According to a World Bank report, the village had, before 1967, relied on its own wells, dug before the war that brought Israelis to the West Bank as rulers that year. In 1968 and 1979, respectively, Israel dug two much larger and deeper wells very close to the Bardala wells in order to provide water to a series of new Jewish settlements in the area.

The larger Israeli wells eventually desiccated the smaller Palestinian ones completely, according to a World Bank report cited by HRW, greatly reducing the amount of water available to the villagers for farming. The community was then forced to pay an Israeli water company, Mekorot, for access to water from the larger wells.

The report argues that while a village like Bardala was prevented from having access to sufficient water and therefore restricted in its agricultural capacity, the nearby settlements have greatly benefited from the water. Agriculture is a big business for the settlements in the valley, the report notes, citing a settlement website that explains how such agricultural activity brings in $130 million in yearly revenue. The Palestinians, meanwhile, have suffered from “drinking water shortages and a sharp decline in lands under cultivation for Palestinians.”

Van Esveld said that certain businesses, such as the Agrexco Agricultural Export Company, were inescapably tied to this system as beneficiaries. Agrexco, according to the report, is responsible for marketing 60% to 70% of the agriculture grown in these settlements. The company profits from the system of discriminatory water allocation, Van Esveld said, making this firm, and its various foreign and Israeli investors, examples of those being targeted by the report’s recommendation.

In previous reports, HRW has never shied away from making prescriptions with regard to Israel. But these have generally been directed at either what the government can do to rectify its human rights record or at how the United States and the international community should put pressure on Israel to do so. An example of this is a recommendation made in the past that was repeated in this report, calling on the United States to withhold part of its yearly aid to Israel in an amount equivalent to Israel’s expenditures on settlement activities.

The new report, however, marks the first time the organization has suggested that corporations tied to certain activities in the West Bank cease operations there. Carroll Bogert, HRW’s deputy executive director for external relations, said this would enable them to avoid “being tainted by Israel’s unlawful practices.”

HRW officials acknowledged that the organization’s decision to offer this recommendation was not taken lightly. The group has often targeted business practices in its reports on other countries. But HRW officials said they were aware that in the context of Israel, some would see this report’s recommendation as an endorsement of the BDS movement. HRW researchers and policy directors all said that the recommendation was made only after much debate over this point.

“It would be disingenuous for us to say it has no similarities to BDS,” Van Esveld said. But stressing the report’s strict focus on appealing only to the companies themselves, and only to those tied to the specific practices that the report criticizes, he said: “This is kind of an S report. We don’t do BD.” The report does not ask consumers to change their behavior, as BDS activists do, he noted; it focuses on businesses and asks them to sanction themselves.

“We are trying to make this as consistent as we possibly can with the work we’ve been doing on business practices everywhere else in the world,” he said.

BDS, on the other hand, covers a very broad range of targets. Barghouti also does not deny that his movement has goals beyond ending the occupation, and that it sees Israel itself, as a Jewish state, to be the problem.

Besides Netanyahu, the HRW report has been criticized by NGO Monitor, an Israeli watchdog group. NGO Monitor accused the human rights group of misrepresenting international law and of not taking the conflict as a whole into account.

A similarly critical editorial in The Jerusalem Post made specific reference to the water allocation issue. “Access to piped water has dramatically improved in recent decades and is significantly better than in Syria or Jordan, which would have been in control of the West Bank had it not attacked Israeli in 1967,” the paper editorialized. The Post piece also said that the Palestinian Authority had done little with its $1 billion in annual civil aid to improve water delivery.