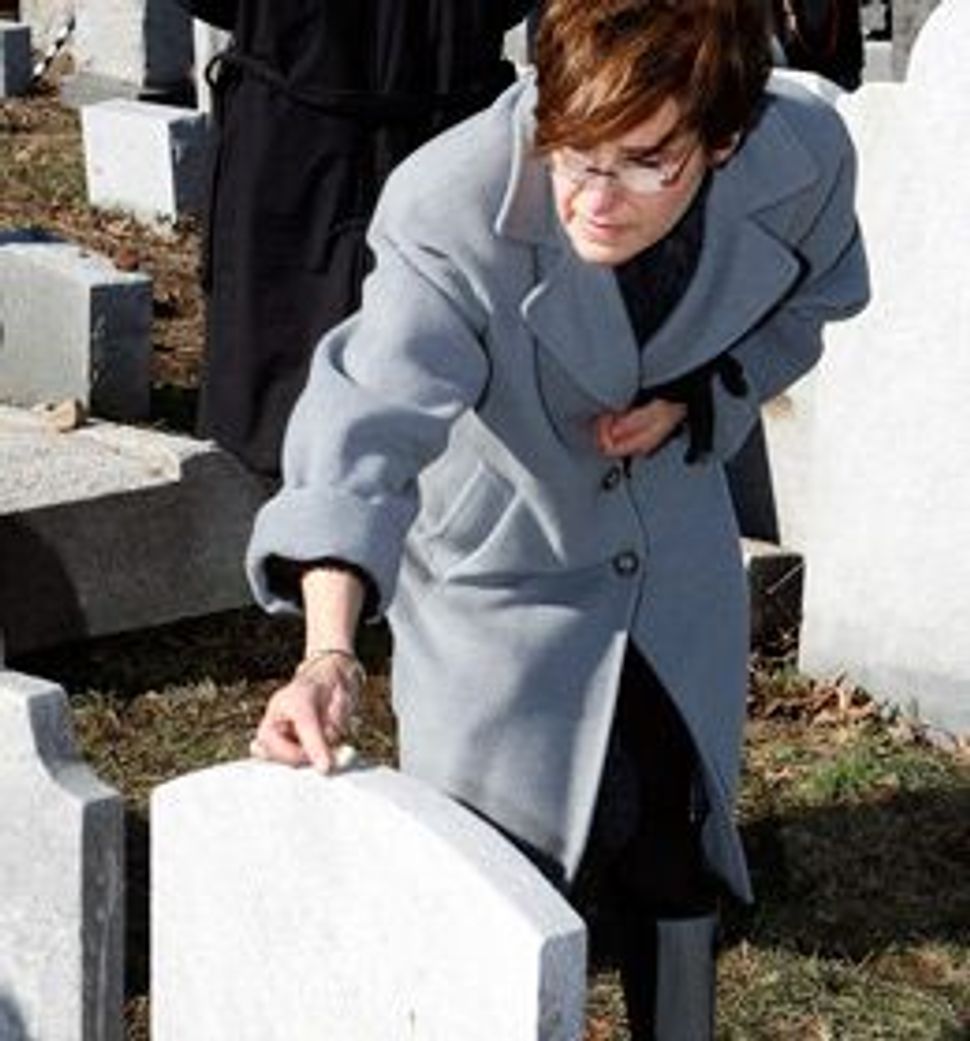 In Memoriam: Amy Koplow, executive director of the Hebrew Free Burial Association, places a stone on the grave of a victim of the Triangle Shirtwaist factory fire. Image by DAVID KARP

In a cold and windswept Staten Island cemetery, four dozen people huddled together to recite Kaddish, the mourner’s prayer, and to mark the 100th yahrzeit of the Triangle Shirtwaist Factory Fire’s victims. Twenty-two of the victims were laid to rest in 1911 at the Mount Richmond Cemetery, which is owned by the Hebrew Free Burial Association. 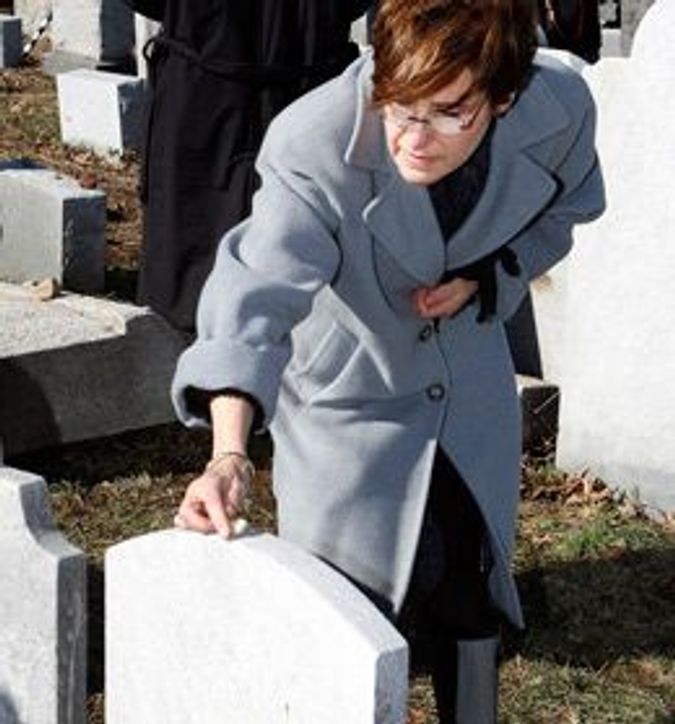 In Memoriam: Amy Koplow, executive director of the Hebrew Free Burial Association, places a stone on the grave of a victim of the Triangle Shirtwaist factory fire. Image by DAVID KARP

“It’s unusual to be here without a burial,” said Guy Rossman, a retired history teacher who took part in the ceremony on March 1. Rossman, who lives in Staten Island’s Willowbrook, is a member of a group of volunteers who come to ensure a minyan for burials of indigent Jews. “We don’t know these people, but it’s a mitzvah to do it, so we come and help.”

Amy Koplow, the burial association’s executive director, led the visit to the cemetery. “It’s really hard to see these graves and not to be moved to tears, because you’re talking about young girls and young men who died in such a horrific way, having no way to save themselves. Our hearts have to go out to them,” she told the Forward.

The association, which began in the 1880s, ensures that impoverished Jewish residents of the metropolitan New York area receive a dignified Jewish funeral and burial. Many of those who died in the Triangle fire were poor, immigrant Jews.

Koplow described details of the lives of many of the 22 victims, more than half of whom were teenagers. She told how long each of them had lived in America, and she read their Hebrew names. Included on the list were two cousins, Russian immigrants Ida and Sarah Brodsky. The burial association’s records at the time were written in Yiddish, and Koplow said that Sarah Brodsky, 21, was to be married five weeks from that fatal day. Her fiancé, who applied for the free burial for his intended, broke down when police showed him the engagement ring he had given her.

Another Russian immigrant, Kalman Donnik, 24, was survived by a wife and an 11-month old daughter, Lillian. After his death, his older brother, Harry, arrived from Russia and married Donnik’s widow.

Koplow also described how the workers had perished: Some had jumped to their deaths, while others were burned inside the Greenwich Village factory. One of them, Lizzie Adler, 24, had been in America for a little more than three months before the fire and was unable to read or write in English. She sent most of her $6 weekly salary to her sisters in Romania. She is believed to be among the workers who jumped from the windows on the eighth or ninth floor.

Also buried in the HFBA plot is Bertha Kulla, 20, who had participated in the 1909 strike known as the Uprising of the 20,000 and was arrested on the picket line.

Forty-four victims of the fire were buried at Mount Zion Cemetery, in the Flushing section of Queens, where 14 of them were interred beneath a monument erected by Local 25 of the International Ladies’ Garment Workers’ Union. The cemetery is the final resting place of Celia Gitlin, who died in the fire at age 17. Gitlin was the great aunt of HBO’s documentary chief, Sheila Nevins, who gave a green light to the upcoming HBO film “Triangle: Remembering the Fire.” A service is being organized for the victims at Mount Zion, to be held on March 27.

Michael Hirsch, a co-producer of the HBO documentary, was among those at the gravesite ceremony on Staten Island. He said it was not difficult to connect the Triangle fire to tragedies today.

Distressed by Republican efforts to roll back the rights of organized labor, and by the Tea Party’s zeal for dismantling government regulation, Hirsch recalled television coverage of the Deepwater Horizon disaster in the Gulf of Mexico, in which survivors of the doomed oil rig were standing on the deck, trying to decide whether to die by burning or by jumping.

“I’m watching this and thinking to myself, ‘Oh, my God, here are two workers trying to make the same decision that many of the Triangle workers had to make.’”