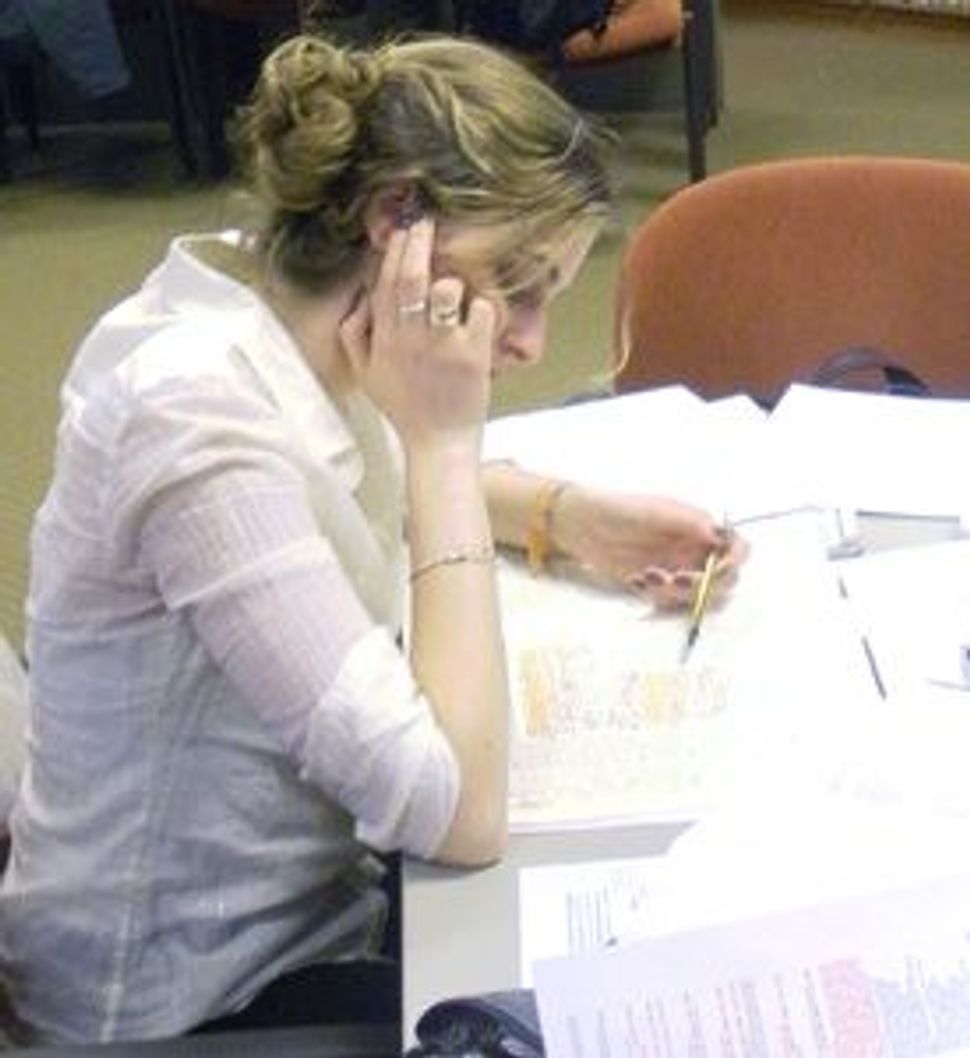 Sex and the Upper West Side: Jana Loeb, a 2011 fellow at the Yeshivat Hadar in Manhattan, wrestles with traditional Jewish texts and struggles to relate what they have to say about sex to the world in which she actually lives. Image by Ben Sales

Just weeks before starting his year as a fellow at Yeshivat Hadar, an egalitarian Judaic learning program for adults, Itamar Landau moved in with his girlfriend. The fellowship demanded that Landau keep kosher and observe the Sabbath. The couple agreed to separate milk and meat in their shared kitchen and to refrain from activities such as driving on Saturdays as they grew accustomed to living together and sharing a bed.

But on the final Friday night of January, Landau slept alone.

He and his girlfriend were both attending Hadar’s annual retreat, and the yeshiva stipulated that unmarried couples were to take separate rooms — regardless of what they did at home. 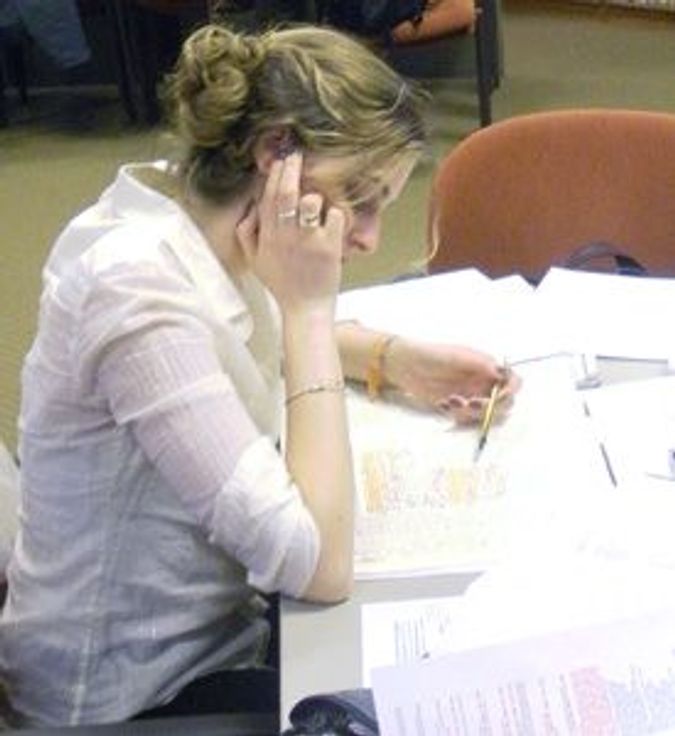 Sex and the Upper West Side: Jana Loeb, a 2011 fellow at the Yeshivat Hadar in Manhattan, wrestles with traditional Jewish texts and struggles to relate what they have to say about sex to the world in which she actually lives. Image by Ben Sales

Hadar, America’s first full-time, egalitarian yeshiva, emphasizes a commitment to observing Jewish law while engaging with modern society, and encourages its fellows to live according to Halacha, or traditional Jewish law. As a result, the yeshiva has articulated clear stances on core practices such as the Sabbath and kashrut. But the discrepancy between Landau’s personal living arrangements with his girlfriend and his arrangement at the retreat reflects the struggle of Hadar’s faculty and students toward a clear definition of one expansive area of Halacha: how and when Jews can have sex.

Hadar is in many ways a flagship institution for Jews who do not consider themselves Orthodox but strive to engage seriously with Halacha. An independent Sabbath minyan of the same name and philosophy, and with overlapping membership, attracts hundreds of young Jews. The yeshiva meets at Manhattan’s Reconstructionist West End Synagogue, which doubles as a library: Books line the walls, and students sit at long tables throughout the room. Instead of reading quietly, though, the students are acting as pupils of a traditional yeshiva would — pounding their fists and yelling at each other as they debated tractates of the Talmud. And instead of breaking the rules, these students are trying to figure them out.

Relating traditional Jewish laws of sexuality with the mores of modern society has been one of Hadar’s focuses this year. Traditional Halacha forbids any nonmarital physical contact between men and women. Married couples must also abstain from any physical relations during the wife’s menstrual period (and for up to a week afterward), a practice called nidah.

Confronting Halacha’s uncomfortable aspects has always been a part of Jewish textual analysis. Hadar, founded in 2007, is a recent arrival in a long line of Jewish institutions aiming to show Jews that millennia-old Jewish law and tradition have much to say about today’s world. Several of Hadar’s deans and faculty members are alumni of the Conservative Jewish Theological Seminary, another attempt to adapt Halacha to modern society. But as Conservative Judaism has played out in many mainstream American synagogues, Halacha tends to be something that only the rabbi engages. Conservative congregants, by and large, live mostly secular, nonhalachic lifestyles.

This is a divide that those involved with Hadar wish to avoid.

In an e-mail to the Forward, Rabbi Ethan Tucker, one of Hadar’s deans, wrote that his yeshiva is forging what he called “a more constructive and coherent discourse around sexuality.” Tucker wrote that most gender-egalitarian environments come with the “corollary [of] an enforced silence about communal norms surrounding sexuality.” The mores of Orthodox communities, conversely, make “any conversation about sexual contact impossible and lacking any nuance.”

Tucker believes that he and his colleagues are creating a third way: a community that discusses current sexual norms while taking rabbinic concepts of sanctity seriously — all within a gender-egalitarian environment. Necessarily, this involves wrestling with traditional texts and with members’ own lives.

Landau is not the only student who lives, unmarried, with his romantic partner — and he does not feel as though he is betraying Hadar’s trust.

“I feel like it’s a halachic community where commitment is valued,” he said. “I have a long-term, pretty committed relationship that is public and known, and accepted. I don’t feel judgment about that whatsoever. My norms don’t feel challenged.”

Because it is relatively new, Hadar has yet to articulate a stance on sexual activity. And — outside of the weekend retreat — it has not mandated that its students keep traditional Jewish sexual proscriptions.

Other schools set clearer boundaries for students. Rabbi Dov Linzer, dean of the liberal Orthodox Yeshivat Chovevei Torah Rabbinical School, said that the faculty recognizes the challenge of observing halachic sexual prohibitions, and has students study with sex therapists and psychiatrists in addition to rabbis. Even so, Linzer added that a student who engages in premarital sex “cannot continue at the yeshiva.”

“We’re sensitive to the challenges that these things represent,” Linzer said. “At the time of the Talmud, most people were married at the time of 14 or 16.”

JTS’s policy more closely approximates Hadar’s approach. Judith Hauptman, Talmud and rabbinics chair, said that while “Jewish law codes speak out strongly against premarital sex,” they do not forbid it. As such, while JTS expects rabbinical students not to cohabitate or to have sex before marriage, abstinence is not required.

“There is a distinction to be made between a religious sin and a sin against social mores,” Hauptman said. “You don’t travel on Shabbat. You don’t officiate at an intermarriage. Those are rules. If we’re talking about premarital sex, we’re talking about an expectation.” Tucker noted that Hadar differs from such seminaries as YCT and JTS, because its goal is to teach future lay leaders, not to train rabbis. Because of that, Tucker says that Hadar is less concerned with setting rules and focuses instead on “trying to marry the learning that we do here to an actual translation of how people live.”

Landau believes that that focus addresses his own situation and that of many other Jews who wish to engage Jewish tradition.

“The institution is not concerned with coming to a halachic answer, but with bringing a new voice to the table and opening up the conversation on Halacha and sexuality and ethics,” he said.

This year, Tucker gave six lectures on nidah, the rules of sexual prohibition and permission in marriage. The lectures, Tucker wrote in an e-mail to the Forward, were “a beginning to a whole new way of talking, more than a conclusion of exactly where we need to be.”

But that “way of talking,” and especially the nidah lectures, made some students feel uncomfortable as they confronted misogynistic rabbinic texts and graphic details of the menstrual cycle.

“We were facing texts in all of their complexity, texts that said things that were outlandish and different,” said Jana Loeb, another of this year’s fellows, citing one text that blamed a rabbi’s death on his slightly lax nidah practices. Loeb added that the fellows’ struggles with sexuality in Halacha come in part from a general ambivalence toward Jewish law — much of which was codified in the 16th century.

“There are people who think, ‘This very old, very paternalistic, very anti-feminist, very sexist, classist system that tried to preserve tribalism, why are you trying to redeem that?’” she said. “That response assumes that Halacha is not something that is flexible.”

In order to make Halacha more able to respond to modern norms, some classes at Hadar focus on applying seemingly arcane halachic terms to contemporary situations. A class held during a weeklong December 2010 seminar for college students, focusing on sexuality in Halacha, suggested that the biblical concept of a concubine could legitimize premarital relationships. But Loeb said that introducing the category of the concubine brought its own host of problems — not least the word’s present pejorative, chauvinistic connotation.

Still not satisfied, the yeshiva determined it would keep digging and exploring, a persistence Loeb appreciated. “Hadar doesn’t stop and say, ‘See, there it is; you’re fine,’” Loeb said. “Hadar goes the extra mile and says, ‘To the extent that this category exists, is it something we want to reframe?’” In trying to adapt Halacha to the modern world, Yeshivat Hadar risks giving Jewish legal sanction to a society whose values differ from those of Jewish law. Philip Gibbs, a college student who studied at Hadar in the summer of 2010 and participated in December’s seminar, said that at times he found himself looking for excuses to avoid changing his lifestyle.

“There’s definitely this motive to justify what you’re doing,” he said. “The conversation that didn’t happen was, when you’re faced with that issue, when the boundaries that are in the text go against what you feel is right, which should inform the other, and how?”

He added that most of the fellows he knew, when faced with those questions, would choose to transgress rather than adhere to traditional halachic prohibitions because they found the idea of not touching the opposite sex impractical. In addition, the yearlong fellows have all graduated from college and have already made decisions about how to approach sex and romance.

Tucker is aware of his students’ decisions, and he hopes that whatever choices they make will be informed by Jewish values and a desire to act “in accordance with divine will.”

The questions, he said, are about, “‘How does this Halacha, this text, apply to me?’ That’s how this deep analysis will often lead to diverse conclusions. That, ideally, should emerge not from a person’s own personal preference but from a real, honest assessment.” Loeb said that examining issues of sexuality in a nuanced way has led her to confront the question of whether she can live a halachic life.

“It would be nicer if [Halacha] were open and shut,” she said. “Then I could dismiss or embrace it more easily. When it’s more complicated than that, its demands on me are stronger, because it might meet me where I’m at, so why don’t I embrace it?”