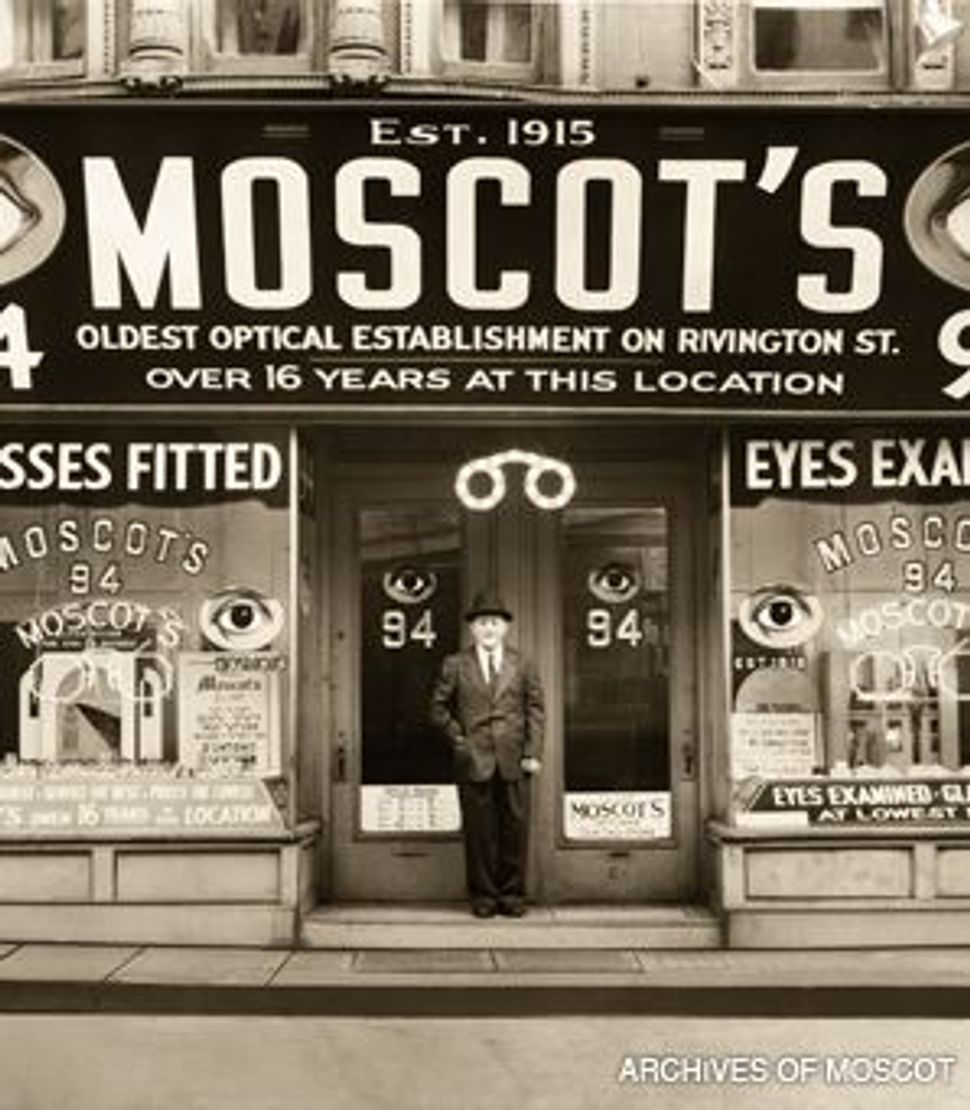 VISIONARY: Hyman Moscot, above, opened the first store, at 94 Rivington Street on Manhattan?s Lower East Side, in 1915.

When the doors shut at the original 2nd Ave Deli and at Ratner’s delicatessen, the long-standing Jewish establishments on Manhattan’s Lower East Side received elegiac goodbyes in the press and on the streets. For many, these erstwhile eateries were among a number of examples of how the Jewish presence in the Manhattan neighborhood is quickly becoming something that exists only in memory. 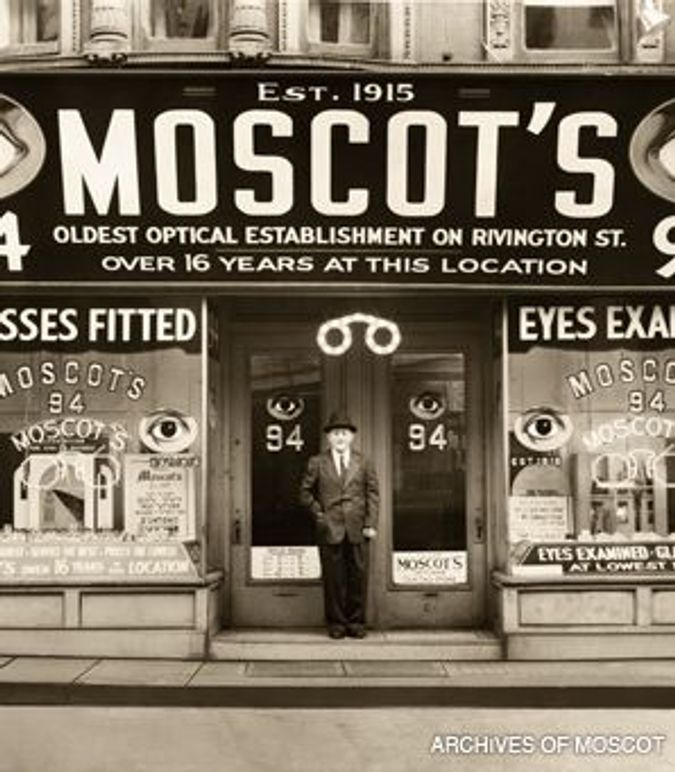 VISIONARY: Hyman Moscot, above, opened the first store, at 94 Rivington Street on Manhattan?s Lower East Side, in 1915.

And then there is Moscot. In this atmosphere of closings, this nearly century-old optical shop has managed to buck the trend, its iconic yellow sign representing an institution as vibrant as ever. From hawking with a pushcart on Orchard Street to accessorizing such fashionistas as Johnny Depp and Mary-Kate Olsen, the Moscot family business has remained a neighborhood destination.

The Moscots credit the survival of their business to the facts that it is a family shop that gives great service and that people always, even during hard times, need glasses. While these factors no doubt carried their business along for decades, their reputation received a big boost five years ago when they launched their own line of glasses. Based on styles from the 1940s found in their own archives, this new line of frames has made Moscot a noted store in one of New York’s trendiest neighborhoods. The glasses have been mentioned in such style bibles as Elle and Men’s Vogue. They also have been worn by a long list of celebrities and are sold around the world.

“These are old styles from an old company,” said Harvey Moscot, 47, the great-grandson of founder Hyman Moscot and the older of two brothers who now run the business. “So many companies these days are trying to look old, but we really are.”

The brothers explained that before creating a whole line, they were quietly selling some of their original stock to interested customers and noticed an increase in demand. Before the 1970s, many glasses were seen as functional rather than fashionable, and today’s clientele was indeed interested in this utilitarian “Buddy Holly” look.

“These are the anti-bling,” said younger brother Kenny, 38.

Before long they decided that their past could very well be part of their present, and that their old frames and even older story might give them a modern appeal. They took on a full re-branding that included the release of the “Moscot Originals” line as well as one called the “Moscot Spirit,” which they describe as retro-inspired, and they made a conscious decision to share their family history through the business. According to Kenny, the names of lenses are “family words that derived or evolved from Yiddish” and include “Nebb” and “Yukel.”

“Both my brother and I had the same vision connected to our rich history and pride. It was sometimes a hard vision for our dad to see, re-branding this line that was no longer available,” said Harvey, who, while being the fourth generation of Moscots in the business, is the family’s first optometrist.

“For me it was tradition, a sense of pride and honor, and I personally just love this business,” said Kenny, who, in addition to being an optician, uses lessons learned from a finance degree to help steer the company. The brothers are the first of the Moscots to go to college.

“We were there as the neighborhood evolved from bustling Jewish immigrants, to one of many immigrants, to despair, to a meth cesspool, and now the epicenter of hipsters,” Kenny said. “We went from being a family place to a destination during the bad times, and now we are drawing a whole new audience.”

The first Moscot to sell glasses was Hyman, an Eastern European immigrant who made his way in New York by peddling ready-made glasses from a pushcart in 1899. In 1915, after building his reputation, he settled into a retail space on Rivington Street. A religious man, Hyman saw the store as a means to an end. His son Sol did not.

Described by his family as a “business man from birth,” Sol took over the company in his teens and opened another retail space. Ambitious and charismatic, Sol is credited with establishing the base of Moscot for decades of success. He worked long hours and kept the store open on the Sabbath and on Sundays, when businesses were supposed to be closed.

“During these blue laws, he would slip the cop $5 and we would stay open. The cop would laugh,” said Joel, who is Sol’s son and Kenny and Harvey’s father.

Sol is also credited with putting up the now iconic “Sol Moscot” sign — which is rumored to have been F. Scott Fitzgerald’s inspiration for the Doctor T.J. Eckleburg sign that peers over characters in “The Great Gatsby” — soon after entering the business. He opened a larger store at Moscot’s current location, on Orchard Street, in 1951. Today there are two other locations, one on 14th Street and another in Queens.

When Joel became a teenager, he headed straight to the store.

Kenny and Harvey say that their father was much like their grandfather. Described by his sons as an “ambassador,” Joel was known for his dedication to customer service as much as for his ability to kibbitz. In fact, he still comes into the store Sundays, with the sole responsibility of kibbitzing.

For Joel, one of the most important things for a successful business was having happy employees. In addition to family members who helped out, the Moscots say that many of their employees worked at the store for 30 to 40 years and are still there today.

“We had a family business, don’t you understand? Nobody ever quit. People worked for years,” Joel said. “It is a family-oriented business. We care.”

Today, when you enter the store on the corner of Orchard and Delancey Streets, before heading up the narrow staircase to the actual shop, there is a small gallery space where people can view old family photos and eyeglass frames. Enlarged snapshots chronicling the evolution of the store hang on bright white walls. Near the window is a case, made of glass, filled with vintage frames that often incite the lust of local hipsters.

The upper level of Moscot has a different vibe. Slightly uneven display cases are filled with fashionable frames, set against a shade of mustard that harkens back to earlier times. A whiteboard above the help desk lists recently released styles and other Moscot news. On the day I visited, customers included a local Dominican man, an Orthodox mother and child, and a stylist for French Vogue.

Harvey Moscot’s 17-year-old son is working as an intern through the summer. Like all the Moscots before him, Zachary will not be pressured to join the business. But if history repeats itself, there is a good chance this family legacy will carry on, the Moscot eyes peering down over the ever-changing Lower East Side.