In Fatah-Hamas Deal, What Role for Salam Fayyad? 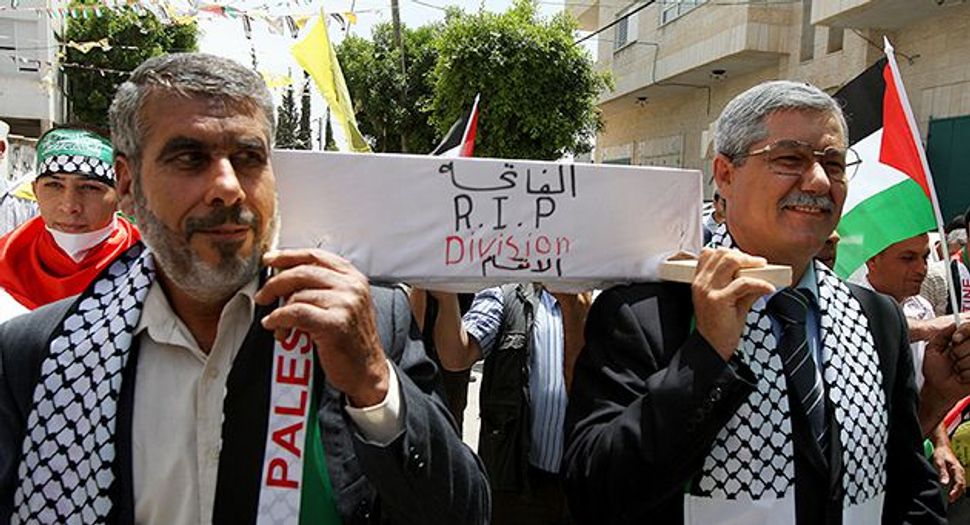 It may turn out to be one of the strangest political revivals on record — a comeback without the protagonist having gone anywhere.

In the hours and days after the Palestinian groups Fatah and Hamas hammered out a unity agreement for governing the West Bank and Gaza in late April, media reports presented Palestinian Prime Minister Salam Fayyad as politically dead and buried. A moderate who told The New York Times at the start of his premiership that it was his “full intention to disappoint Hamas,” Fayyad went on to become hated by the Islamist movement and less than popular with Fatah and its leader, Palestinian Authority President Mahmoud Abbas. He was said to be a certain casualty of reconciliation between the two factions.

But a few days after the official signing of the agreement in Cairo, on May 4, the tone of reports changed and Fayyad’s departure became less of a certainty. On May 8, the London daily Asharq Al-Awsat reported that Abbas, who has the power to appoint prime ministers, wants him to head the unity government that will rule until elections take place, next May at the latest. Then, on May 10, the Bethlehem-based Maan News Agency reported that senior Fatah leader Hussam Khader called for Fayyad to remain premier and urged Hamas to agree.

In between the first prognosis of Fayyad’s fate and the second, two aspects of international reaction to the Hamas-Fatah unity agreement became clear: America is reserving judgment on the interim government. And Israel is refusing to make the routine transfer to the P.A. of about $90 million in taxes and duties that it collected on the Palestinians’ behalf, saying it fears that the money could reach Hamas.

The prospect of a government role for Hamas, which has taken responsibility for numerous terrorist acts against Israel and refuses to recognize the state’s right to exist, has sparked international concern. But the word on the Palestinian street and in the corridors of power, according to Mkhaimar Abusada, professor of political science at Al-Azhar University in Gaza, is that Fayyad has the power to get the P.A. out of this bind.

“Palestinians are now reconsidering about Fayyad to avoid isolation and boycott,” he said. “People very much don’t want to go back to the situation of the last unity government in 2007, which was shunned and collapsed within three months.”

Over the four years since that government broke up in a spasm of violence, attention has focused on whether the key players in the two groups would ever reconcile. The possibility that a unity bid could succeed or fail based on the fate of Fayyad was rarely discussed. He was, after all, a peripheral player in the saga.

Fayyad, a 59-year-old native of Deir al-Ghusun on the West Bank with a doctorate in economics from the University of Texas in Austin, does not come from either of the two factions. Nor does he represent any of the smaller established strands in Palestinian politics. Instead he heads a tiny party called Third Way, which in the last election, in 2006, received slightly less than 2.5% of the vote. In fact, many Palestinians think that he never should have been appointed in the first place, never mind be reappointed. “I don’t believe that losing in elections gives you the platform to be able to be prime minister, which is what happened with him,” Ramallah-based businessman and political commentator Sam Bahour told the Forward, adding that Fayyad lacks the “political tools” to lead.

But Fayyad brings to the government an asset no one from Fatah or, certainly, Hamas possesses. In the eyes of the West, he offers the assurance of competency, probity and constancy in a rocky political environment. This is what makes his future the issue of the hour.

In the late 1980s, when many on the Palestinian political scene today were taking part in the first intifada, Fayyad was crunching numbers in Washington, where he worked as a World Bank economist from 1987 to 1995. His first foray into Palestinian politics was as finance minister from 2002 to 2005, when he received international acclaim for building the Palestinian economy. After returning to the Finance Ministry in the failed unity government of 2007, he became prime minister, and two years later he began a plan to construct the framework of a state by mid-2011. A recent World Bank report says that this plan has left the P.A. “well-positioned for the establishment of a state at any point in the near future.”

Abusada views Fayyad as “the link between the Palestinians and the international community.” With him at the helm, the unity government will be far more likely to meet international approval, he said. Furthermore, the Palestinians’ campaign to obtain recognition from the United Nations General Assembly for the West Bank and Gaza as the independent state of Palestine will attract greater support, Abusada said. International pressure on Israel to unfreeze tax money will also be stronger, and Israel will find it more difficult to refuse to comply, he added.

To the West, Fayyad is synonymous with dependability. When the last unity government with Hamas fell in 2007 after the West withheld funding from the P.A., it was Fayyad who successfully lobbied to get cash flowing again to the successor government dominated by Fatah on the West Bank. The U.S. State Department’s July 2007 notification to Congress that permitted American transactions with the P.A. to resume specifies that the funds will go to the “government of Prime Minister Salam Fayyad and President Mahmoud Abbas.”

Abusada predicted that even Hamas would acquiesce to Fayyad continuing in his post on the basis of these practical considerations. But Raed Neera, professor of politics at An-Najah National University in Nablus, contested this. The most prominent role Hamas will permit Fayyad to have is finance minister, he predicted, and even Fatah politicians might oppose him continuing in government because of his closeness to the West.

Another reason Fayyad’s reappointment is unlikely, said Neera, is that both factions will want to appoint someone from Gaza as prime minister. This will symbolically emphasize Gaza’s reintegration into the P.A., he said. It will also position the premier where the “main task” of the new government lies, Neera said — namely, reconstructing Gaza.

As for the West’s verdict on the unity government, “I don’t think that recognition will depend on having Salam or not having Salam,” Neera said, adding that in his view, the same principle applied to the statehood bid.

Eran Shayshon, leader of the “Palestinian challenge” team at the Tel Aviv-based think tank the Reut Institute, is similarly skeptical of Fayyad-centric analysis. He believes that the reaction of world leaders, especially President Obama, to the so-called Arab Spring virtually guarantees its engagement with the unity government. “It can’t be that the Muslim Brotherhood can freely run for government in Egypt but not an Islamist movement in Gaza and the West Bank,” he said.

In Fatah-Hamas Deal, What Role for Salam Fayyad?