Saudi King Brings Rabbis and Imams Together in Spain 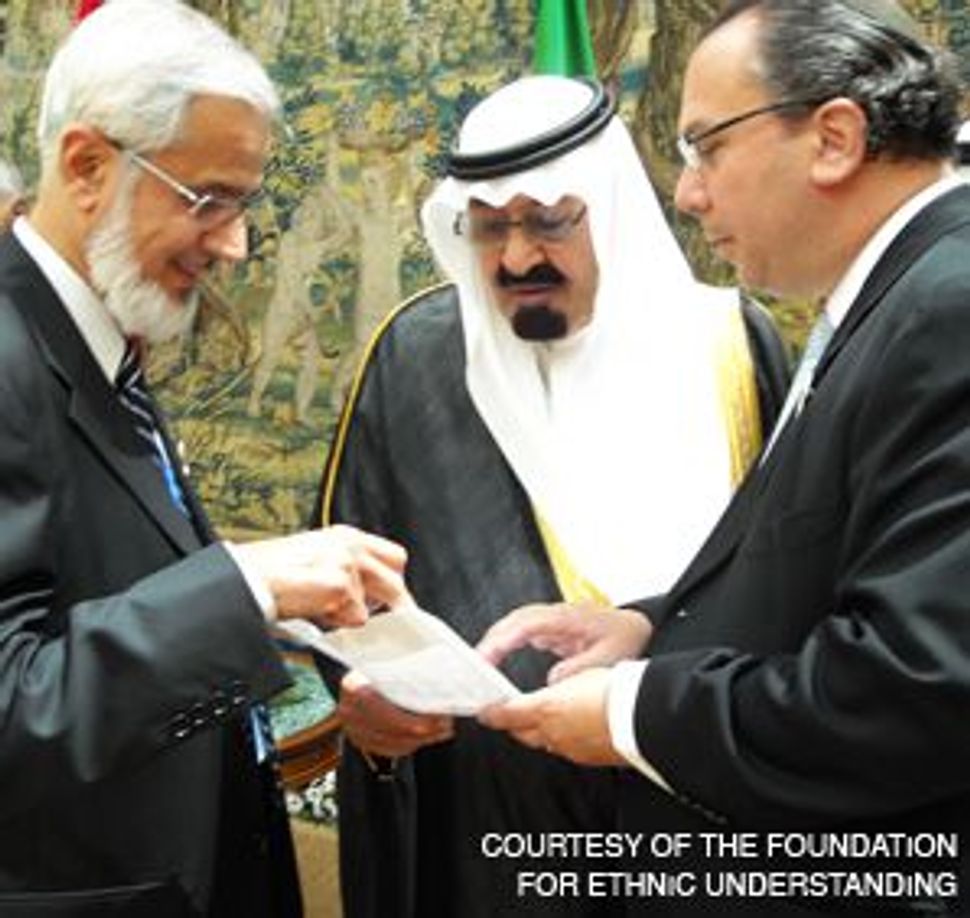 TALKING: Rabbi Marc Schneier talked with the Saudi king and the chairman of the Fiqh Council of North America at a meeting to promote interfaith dialogue in Spain.

Despite reservations from conservative Jewish and Muslim quarters and controversies over the guest list, an unprecedented interfaith conference convened by Saudi Arabia was attended by nearly 300 representatives from the world’s major faiths in Madrid this past week. 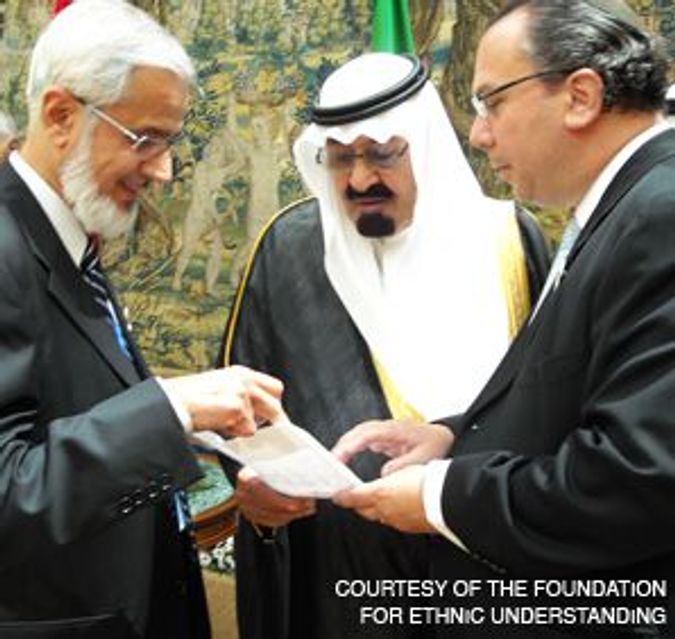 TALKING: Rabbi Marc Schneier talked with the Saudi king and the chairman of the Fiqh Council of North America at a meeting to promote interfaith dialogue in Spain.

The meeting, which was hastily organized in recent weeks, featured calls for peaceful coexistence and steered clear of sensitive political issues such as Iraq, Iran and the Palestinians. For many of those in attendance, the primary importance of the conference was the fact that it was taking place at all.

“I would just use the old Woody Allen adage: Ninety percent of life is just showing up,” said Rabbi David Rosen, director of interreligious affairs at the American Jewish Committee. “This is a historic event just by the very fact that it is taking place.”

The run-up to the conference was marked by a series of disputes. One involved Rosen, who is based in Jerusalem and holds dual Israeli and Irish citizenship.

After the Associated Press reported that he was the only Israeli invited, the Saudi organizers, who had purposefully not invited Israelis or Palestinians, scrambled for a few days before deciding to list him as American in the conference literature. This prompted a barbed reaction from Israel.

“Practically speaking, he is being invited as a foreigner and not as an Israeli,” said Arye Mekel, an Israeli Foreign Ministry spokesman. “If they really wanted to make this significant, they should have invited real Israeli rabbis.”

Rosen stressed that the organizers had never intended to invite him as an Israeli, and commended them for finding a way to keep him on the list.

“When I went to salute King Abdullah, I made a point of identifying myself as a rabbi from Jerusalem, and although some people in his entourage gasped, he warmly greeted me,” Rosen said.

The Saudis also had to walk a fine line vis-à-vis their own religious hardliners. In an apparent effort to satisfy traditionalist clerics, the word “religious” was dropped from the official name for the gathering, to the “World Conference on Dialogue.” In addition, while the choice of Spain as a host was officially meant to recall the golden era from the eighth to the 13th centuries when Muslims, Christians and Jews lived together in relative peace under Islamic rule, several participants said it was in fact a deliberate move to deflect domestic criticism from Wahhabi clerics.

Critics of the conference pointed out that the Spanish venue was a stark reminder that non-Muslims are not authorized to practice their faith openly in Saudi Arabia, thus casting doubt on the kingdom’s real commitment to interfaith dialogue.

Moreover, skepticism about the organizers’ willingness to avoid political issues was fueled earlier this month by reports that the conference’s principal Jewish speaker was Rabbi Yisroel Dovid Weiss, a member of the anti-Zionist Neturei Karta group. Weiss was eventually disinvited after complaints from several groups, including the Islamic Society of North America. He was replaced by Rabbi Arthur Schneier of Manhattan’s Park East Synagogue.

Another controversial issue was the absence of women speakers at the conference, which was publicly mentioned by several participants as a “serious problem,” according to Rabbi Arthur Waskow of the Shalom Center.

But the controversies were by most accounts a sideshow at the conference. With both Abdullah and his Spanish counterpart, King Juan Carlos, calling for constructive dialogue, interfaith amicability marked much of the gathering.

“A Muslim king sponsoring a meal hosted by a Catholic king at which Jews had kosher meal options,” marveled Rabbi Burton Visotzky from the Jewish Theological Seminary. “The event represents a sea change in Saudi attitudes and theology.”

Saudi King Brings Rabbis and Imams Together in Spain