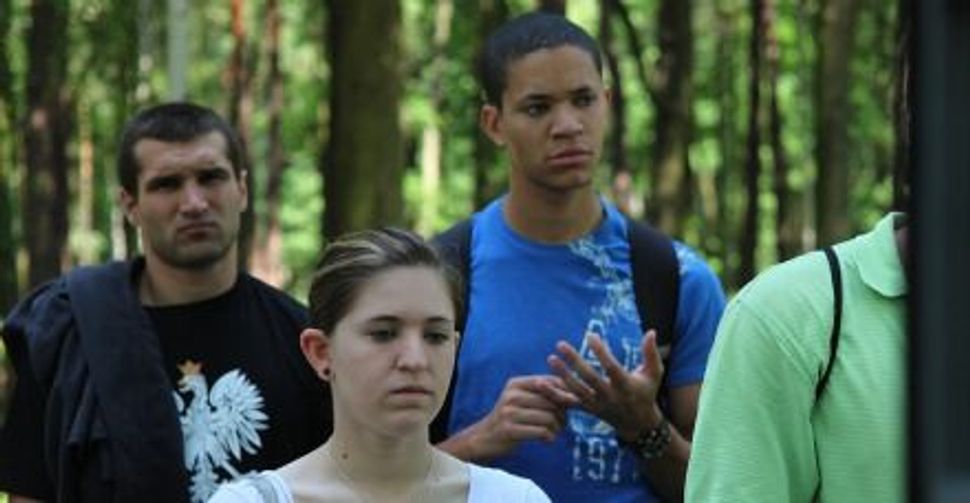 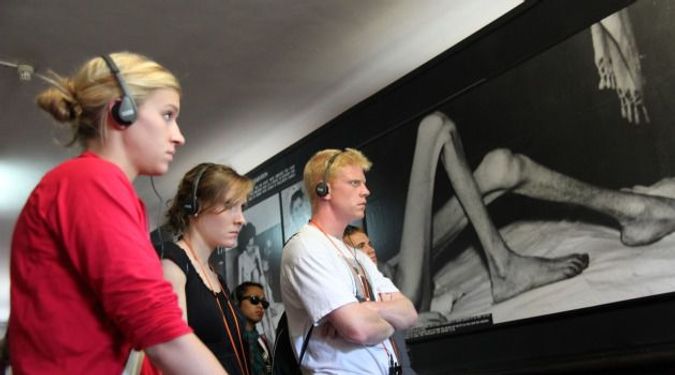 Learning To Say No: American cadets visit museum at Auschwitz as part of a program to teach them about dangers of totalitarianism. Image by KRZYSZTOF GALICIA

In an upstairs room at the only remaining synagogue in this town, 37 miles west of Krakow, 13 future American military officers wrestled with ethical questions in the actual shadow of Auschwitz.

Clad in jeans and T-shirts, the students from West Point, the U.S. Naval Academy, the Air Force Academy and the Honors Program of the United States Coast Guard Academy listened as Christopher Clifton, a 21-year old Coast Guard midshipman, called the murderers who conceived of and carried out the killings at Auschwitz “evil people who enjoyed doing evil to people.”

It was a viewpoint that drew a quick response from Clifton’s fellow participants in the American Service Academies Program, sponsored by the Auschwitz Jewish Center, in Oswiecim, and the Museum of Jewish Heritage, in New York.

“This was not carried out by an army of psychopaths,” midshipman Jordan Foley countered. “The Holocaust goes beyond evil.” Foley, a 23-year-old Annapolis senior from Butler, Pa., thought that simply blaming the Holocaust on “evil people” ignored the systemic character of Nazi racist ideology. “If we write the killers off as psychopaths for this event, then we excuse humanity for allowing this to happen.”

Just three miles from where the cadets were holding their discussion stood the red brick barracks of Auschwitz I, the iconic concentration camp with the perverse “Arbeit Macht Frei” (“Work Sets You Free”) sign at the entrance. The cadets and midshipmen participating in this discussion were chosen this year from among 170 applicants to participate in the annual two-week educational program, begun in 2004, for students from the nation’s top military academies. The program, in which they visit Auschwitz and learn about the Holocaust firsthand, encourages discussion on the implications of what they are learning for their own upcoming careers as warriors.

Inside, the thrust of the discussion seemed to swing toward Foley’s view. Regina DiMarco, a 19-year-old cadet from West Point, said: “It was not an army of psychopaths who did this. It was an army of idealists inspired by dangerous Nazi ideology.” DiMarco, of Fort Leavenworth, Kan., plans to become an Army doctor.

Before World War II, the town of Oswiecim, which the Germans called Auschwitz, where the cadets were staying, was a population center with 20 synagogues. The Germans destroyed all but this one, the Chevra Lomdei Mishnayot Synagogue, which was used to store ammunition. 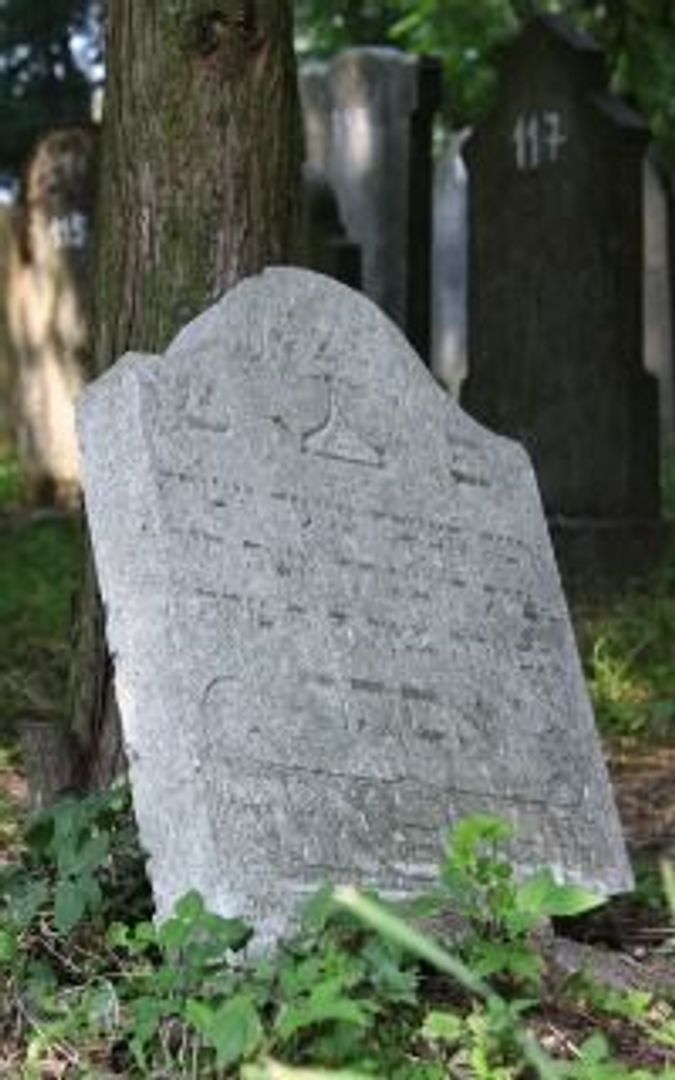 The American Service Academies Program was the idea of retired New York businessman Fred Schwartz, who founded the Auschwitz Jewish Center Foundation. He envisioned a program designed for young leaders who will teach future generations that there must never be another Auschwitz.

The program, intended to heighten awareness of ethical issues in the military, seeks to provide a framework for examining what can happen when ethical considerations are not taken into account and when military leaders abandon their responsibility to prevent atrocities.

Such atrocities are not limited to Germans during the Nazi period. “Everybody has the capacity for absolute evil,” said Ian Cameron, a 21-year-old Navy midshipman. “It’s important to realize that we shouldn’t build up the mystique that there was something particularly evil about the Nazis that we couldn’t repeat.”

Cameron, from Rochester, Minn., is majoring in Arabic. He spent last summer teaching English to Iraqi refugees in Amman, Jordan. While in Amman he wrote, in his application for the Auschwitz program, “I was confronted with the real consequences of our military operation in Iraq when I taught the refugees.”

Will the experience at Auschwitz help them face potential battlefield dilemmas in Iraq and Afghanistan?

Foley saw a connection between his experience at Auschwitz and a heightened sensitivity to civilian casualties in war. He is troubled that drone attacks have killed innocent civilians in Pakistan and Afghanistan. “How many civilians are we allowed to kill in order to get high-value targets?” he asked. “We can’t keep killing civilians like this. That is something I struggle with.”

Cameron believes that every officer must ask questions about policy. “We rarely reflect on the ethical foundations of military operations that we are involved in,” he said, adding that even if young officers are not involved in shaping military policy, they still should ask themselves if the policy is wise.

This observation is consistent with what David Frey, associate professor of history and director of the Center for Holocaust and Genocide Studies at West Point, related in a telephone interview with the Forward.

Frey emphasized the need for military leaders capable of critical thinking. “We are not trying to create hard, unthinking warriors who head into battle and don’t ask questions,” he said.

Frey sees the American Service Academies Program as helping future military officers to develop ethical principles. “A visit to Auschwitz has particular power, forcing cadets to plumb the depths of human depravity and to consider what their obligations are, as future officers, to humanity,” he said.

During their three days at Auschwitz, the future military officers struggled to understand the sheer horror of the Holocaust and the complicity of the German military.

“I thought I would come here and discover what the victims went through and come away understanding the Holocaust,” Foley said. “What I can’t understand is how Germany, such a well-educated country, could commit this atrocity.”

An exhibit of pre-Holocaust family pictures engaged the group at Auschwitz-Birkenau. The pictures were from photo albums among the precious possessions the victims brought with them to Birkenau, believing they were being resettled.

These photographs evoked happier days before the Holocaust: a father smiling with his son as they looked at family pictures, a mother embracing her young daughter.

This cruel juxtaposition of family photographs from happy days with the murderous place where those once normal lives were destroyed was very hard on DiMarco. “It made me sick to my stomach,” she said.

“The picture of the mother and daughter made me think that could have been me and my mom,” said 20-year-old West Point cadet Sara Roger, the daughter of a single mother who lives in El Paso, Texas and served 20 years in the Army. Roger volunteers at a soup kitchen and works with the mentally challenged. “To bring a smile to someone’s face brightens my day,” she said.

Walking through the concentration camp, the cadets and midshipmen appeared numb when they saw the enormous glass cases piled with human hair, shoes, eyeglasses and other ordinary articles that once belonged to those who died in the gas chambers. “I was able to touch the walls that prisoners touched,” DiMarco said. “I saw what they saw. When you close your eyes, you feel something here that you don’t feel in a museum.”

The role of the German military and the issues involved in obeying unethical orders were a pervasive theme.

Roger explained that in their West Point classes students debate and discuss U.S. military atrocities and unjustified killings in Iraq and Afghanistan.

“We’ve gone over different situations…of the soldiers going up to civilians and just shooting them and trying to stage it as if it was an accident, and things like leaders, especially leaders, giving orders to blindly kill innocent civilians,” she said.

Roger termed a leader who gives such directives “a war criminal.” In learning about the Holocaust, she said, “I definitely see the connection that can be brought to the present day, because the Holocaust started with the army, and it can be connected to our army, and the situations we see today can be prevented if we don’t obey those immoral orders.”

Asked how to recognize an immoral order, Roger said that it is common sense based on the development of a moral compass. Cameron, who wants to become a Marine Corps infantry officer, blamed apathy for the Holocaust. “This demonstrates the terrible consequences when people do nothing about evil,” he said. The beautiful June weather during their days at Auschwitz made it harder to grasp what had happened in this place.

“I heard birds singing, saw willow trees swaying in the breeze and shrubs neatly trimmed,” Cameron said “I felt uncomfortable that it was such a nice day in this place. It seemed to dilute the horror of it all.”

Paris Scott, a 22-year-old Annapolis senior from Waldorf, Md., who is preparing to serve on a nuclear submarine, said he was frightened when he entered the crematorium.

“I got sick walking through this graveyard,” he said. “I will never know what it means, but it is so overwhelming to be there and know that some people deny it happened. I never would have survived this place. Why do I want to feel what they felt?”

Scott said that he had a dream in which he himself was on a train with people being taken to Auschwitz. He woke up when they arrived at the camp and were being selected for labor, or extermination.

Kelly Laurent, a 21-year Air Force Academy student, said she cried when she heard someone say “See you tomorrow.” She realized there were no tomorrows for those who died in the gas chamber.

On their last day in Oswiecim, the group worked at cleaning up a Jewish cemetery that dates to the 18th century. While no Holocaust victims are buried there, the cemetery itself fell victim to the Germans, who destroyed it and took away the tombstones. After the war, half the stones were returned to the cemetery, but it was impossible to place them in their original locations, according to Tomasz Kuncewicz, director of the Auschwitz Jewish Center, which maintains the cemetery.

The young Americans trimmed hedges, weeded walkways and removed snails from the tombstones. “Part of our program for the cadets is to have them do something real to preserve history,” Kuncewicz said.

DiMarco found the work gratifying. “A Jewish family came here while we were working, and I was glad they saw us caring for the graves,” she said. “It enabled us to connect with the Jewish community that was here before the Holocaust.”

“I read books on the Holocaust, but it was nothing like this,” Foley said. “This experience has enabled me to touch history.”

Foley related an incident in the cemetery that intensified his experience of the Holocaust. As the cadets were working, they found a dying bird covered with flies. All agreed it should be put out of its misery, but no one was willing to do it. Finally, Foley used a hoe to kill the bird.

“I felt really bad,” he said. He recalled that the guide at Auschwitz related how a German bashed an infant’s head against a concrete wall. “How can someone do that to a human being?” Foley asked. “I had a rough time killing a dying bird.”