In Boost for McCain, Ultra-Orthodox Push Israelis to Vote in American Elections 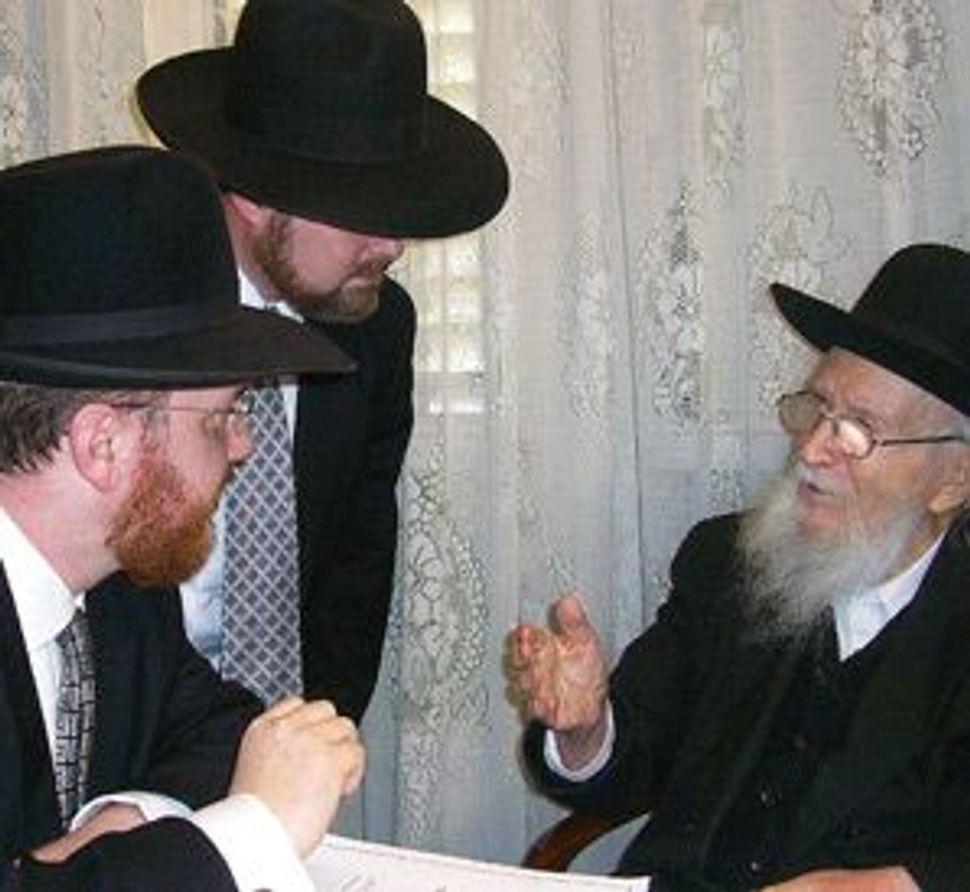 GET OUT THE VOTE: Ultra-Orthodox lobbyist, Rabbi Yehiel Kalish, left, spoke with other Israeli rabbis about pushing American citizens in Israel to vote in the upcoming presidential elections.

Haifa, Israel — As the American presidential contest between Barack Obama and John McCain heads into its final stretch, a group of leading ultra-Orthodox rabbis in Israel is preparing to release a statement that urges the country’s American expatriates to exercise their voting rights in November by casting absentee ballots. 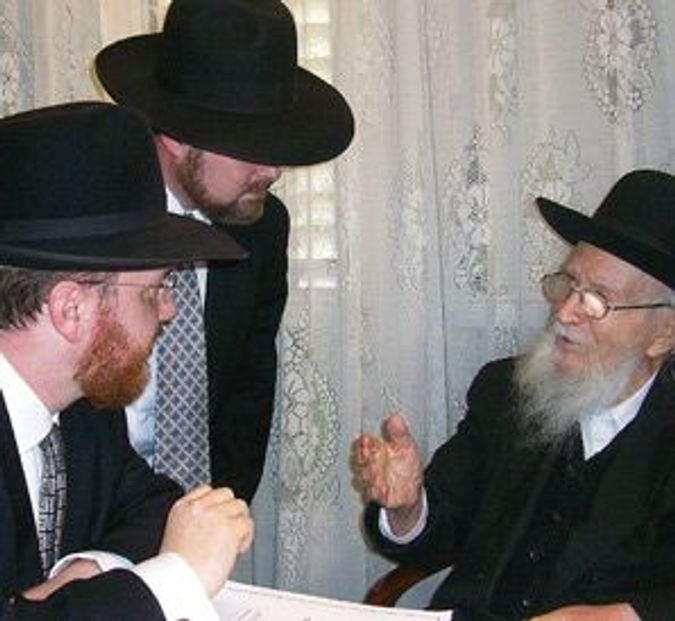 GET OUT THE VOTE: Ultra-Orthodox lobbyist, Rabbi Yehiel Kalish, left, spoke with other Israeli rabbis about pushing American citizens in Israel to vote in the upcoming presidential elections.

The statement comes on the heels of a visit to Israel by Haredi lobbyist Rabbi Yehiel Kalish, who is the director of government affairs at Agudath Israel of America, a leading Haredi advocacy organization. Kalish spent a week in Jerusalem and Bnei Brak early this month, meeting with rabbis to request their help in mobilizing Americans living in Israel to register and vote.

Kalish said that the campaign, the first of its kind, is a nonpartisan effort to maximize the voting rate among American Israelis in order to strengthen the Jewish community’s bargaining power in Washington. The hope, he said, is that a high turnout will encourage the winning candidate — and other decision makers — to pay attention to the Jewish community’s priorities when formulating policy.

“Every vote cast from Eretz Yisrael comes from someone concerned for the safety and security of people living there, and this will be understood in Washington,” Kalish told the Forward.

Aaron Spetner, a Jerusalem-based Agudath Israel activist who is heading the campaign, added that “if thousands of voter registration forms are coming in from Israel, it makes us powerful in Washington — with the president, senators and congressmen.”

There are an estimated 200,000 Americans living in Israel and the Palestinian territories. Only 35,000 are currently registered to vote.

Several experts contacted by the Forward voiced skepticism, however, at the organizers’ claim of nonpartisanship, pointing to conservative leanings among Haredi voters. “While I can’t be sure, Haredim are much more right-wing and want to show McCain that they are capable of delivering the goods,” said Bar-Ilan University sociologist Menachem Friedman, who writes on Haredi culture.

Political activists were more direct. “You would have trouble convincing me that this is not done in support for McCain by people who favor McCain,” said Gershon Baskin, founder and CEO of the dovish Israel/Palestine Center for Research and Information.

Baskin said that regardless of whether or not there is explicit rabbinic endorsement for McCain, Israel is an obvious recruiting ground for McCain supporters. “American Jews are by majority behind Obama,” Baskin said. “Ask most Israelis who they would vote for if they could, and a majority will say McCain. Now, among American Israelis, who tend to be more right-wing and more religious — especially those targeted in this campaign — McCain will fare particularly well.”

Though Spetner insisted that the effort was not aimed at a particular candidate, he implied that a high Haredi turnout might make a specific impact. “Politicians recognize voters; they recognize the people who get them elected,” he said.

But Spetner continued, “Who we vote for is not as important as letting candidates know that there are all these people who will be voting largely on Israel-related issues. Knowing priorities of voters is what shapes the agenda in politics, so we have come to the realization that we should be part of that. If we vote, and are known to vote, it will cause them to think about us before anything they do.”

He singled out security issues that affect Israelis, foreign policy decisions affecting Israel and matters in the United States that affect the Jewish community as issues on which he believes the opinions of Americans in Israel could have increasing clout.

Sociologist Samuel Heilman of Queens College of the City University of New York seconded Spetner’s analysis. “The primary motivation is to show that [Agudath Israel] can motivate people to go to the polls,” he said. “Once these people are checked out on the voter list, [Agudath Israel] has won. Nobody knows who they will have voted for.”

Heilman, however, added that, given the Haredi community’s tendency to vote right wing, the fact that Agudath Israel will be able to tell Republicans “with a wink” that it secured them extra votes is secondary, Heilman said.

Harnessing rabbinic pressure is just one component of Agudath Israel’s campaign. Kalish also launched a grass-roots initiative to set up voter registration offices in Haredi homes. Posters have gone up in synagogues and community centers, informing people that they have about a month, depending on their home state, to register as voters.

Simultaneously, Agudath Israel is gearing up at home in America to encourage Haredi voter turnout. This effort has the backing of several leading rabbis, including the head of the acclaimed Ner Israel Yeshiva of Baltimore, Rabbi Aharon Feldman.

During Kalish’s visit to Israel, he met with three of the country’s most revered yeshiva heads: Aharon Leib Shteinman and Michael Yehuda Lefkowitz of Ponevezh Yeshiva and Nosson Tzvi Finkel of the Mir Yeshiva. He also met with Rabbi Chaim Kanievsky, son-in-law of the most respected talmudic authority in the Orthodox world, Rabbi Yosef Shalom Elyashiv. The four rabbis he met are all noted for their avoidance of political involvement.

In addition to the yeshiva heads, Kalish contacted several grand rabbis of Hasidic sects, and at least one is believed likely to sign on.

As planned, the campaign is turning housewives in Haredi neighborhoods into political operatives. Judy Neuwirth of Jerusalem’s Bayit Vegan neighborhood told the Forward that until she accepted a bundle of voter registration forms from an Agudath Israel official early this month, the only kind of politics she got involved in was “between my kids.”

Now, a stream of visitors arrives daily to register. She gives the visitors forms, which she collects and sends to Agudath Israel for processing. “It is important that whoever is elected has his head firmly screwed on in the sense that he does what is good for the Jews in Israel in order to keep our support,” she said.

Another activist, Bracha Ross, a housewife from the Haredi West Bank settlement of Betar Illit, said: “When people around here heard that we have forms, they were very excited. A lot of people did not even know you can have an absentee vote. This campaign is really encouraging people to use their rights.” She added that while the form is available online, this is of little use to Haredim, many of whom adhere to rabbinic rulings against using the Web.

Despite the activists’ enthusiasm for the drive, the notion of a nonpartisan campaign is lost on some of them. While Agudath Israel has stated that it will not show favoritism toward either candidate, Neuwirth holds out a hope that the rabbis encouraging participation in the poll will also offer recommendations of whom to vote for. “The same as happens in [elections in] this country, we will vote for whoever the rabbis say is better,” she told the Forward.

In Boost for McCain, Ultra-Orthodox Push Israelis to Vote in American Elections