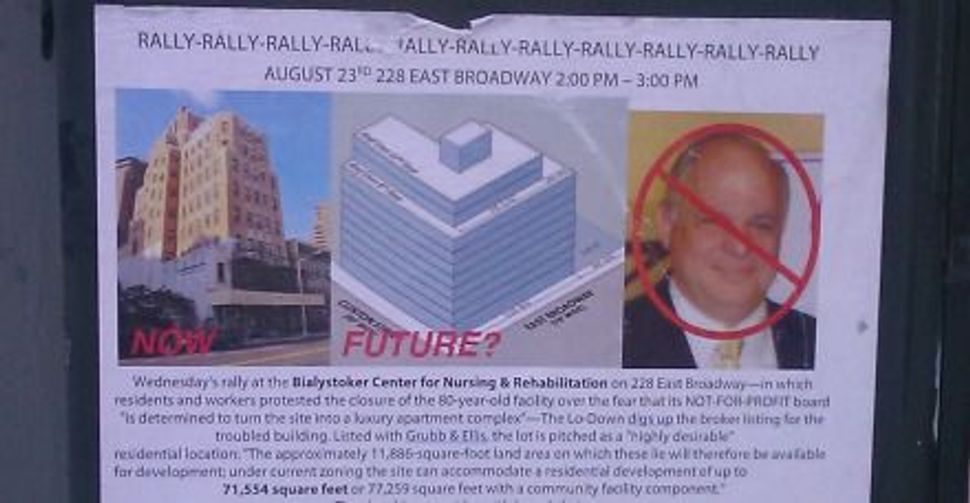 The planned closing of a venerable Lower East Side nursing home founded by a coalition of the neighborhood’s storied landsmanshaftn, or Jewish mutual aid societies, has sparked protests and allegations of self-enrichment and mismanagement by the home’s board.

The Bialystoker Center for Nursing and Rehabilitation, founded 80 years ago by immigrants from the Polish city of Bialystok, plans to shut its doors by October 28, ending its history as a central institution in the lives of generations of Jewish immigrants and their descendants. The board insists it has no choice and cites insurmountable financial challenges, including a $3 million annual operating deficit. 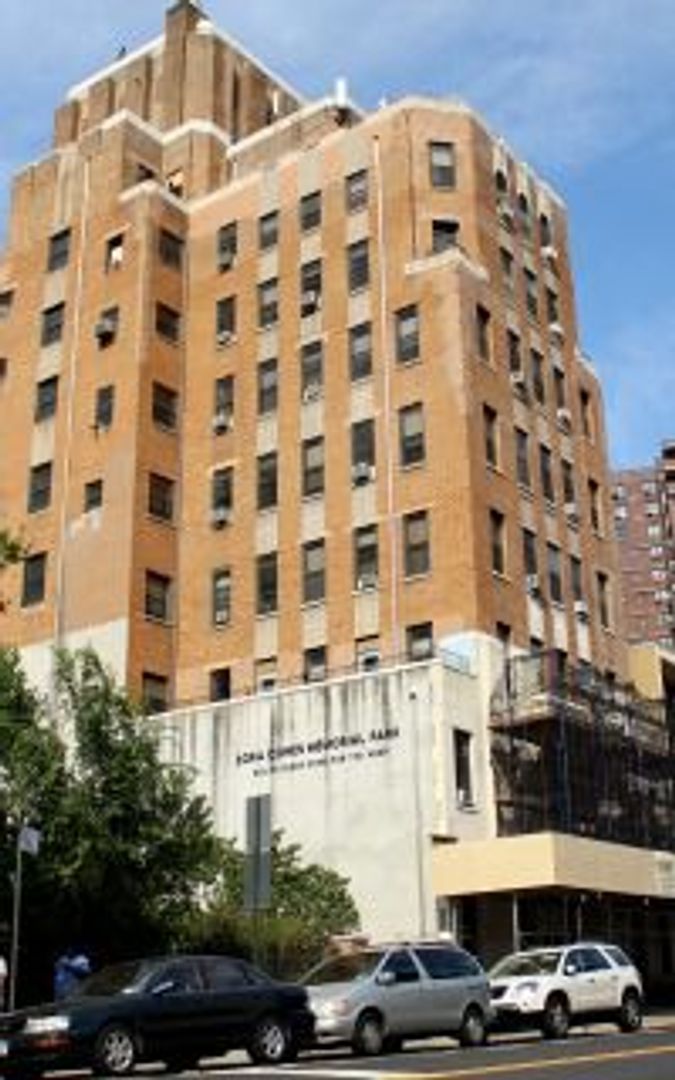 Home No More: After 80 years, the Bialystoker Center is slated to close. The group that runs the nursing home says it is broke, but activists blame mismanagement. Image by NATE LAVEY

“We’re not in a position financially to support a healthcare institution,” said Barry Winston, a board member and former board chair. “The fact is that only with a massive infusion of capital, which is just not available, could the home be rehabilitated.”

But activists and independent experts say the board’s sale last year of an adjacent building to the board’s chair has raised serious questions about mismanagement.

In August 2010, the board sold an office building owned by the Bialystoker Center to a corporation controlled by a real estate firm owned by the current board chair, Ira Meister.

Board member Aaron Shmulewitz acted as Meister’s firm’s attorney in the deal. The three-story building, which is next door to the Bialystoker center, sold for $1.5 million. It is now vacant.

“If it doesn’t raise a red flag, it’s at least an orange flag,” said Dan Kurtz, former head of the charities bureau of the New York State Attorney General’s office, which regulates non-profits like the Bialystoker Center. It’s “not per se illegal, but it raises questions,” Kurtz said. “Frankly, it’s odd for a board member to represent a buyer when he’s a member of the board.”

Neither Meister nor Shmulewitz responded to a request for comment. But Winston defended the sale. He said that Meister, whose firm took out no loan in the purchase of the property, was chosen as the buyer due to the organization’s immediate need for cash.

“When you’re between a rock and a hard place, you don’t have a lot of leeway,” Winston said. “To go out on the open market and the process that that entails, waiting and bidding, that’s like having a heart attack and waiting to fill out your health-care forms before you have oxygen or a defibrillator. We were very close to not being able to perform the fundamental functions. And Mr. Meister was able to come through.”

Winston said that Meister recused himself from the board’s vote on the sale.

Tax documents filed by the Bialystoker Center do indicate an organization in serious financial distress. As of the end of 2009, the organization had net assets of negative $4.9 million. In 2009, it ran a deficit of $3 million. Representatives of the center said that the financial situation by the end of last year had deteriorated even further.

Winston said that the building’s age meant that keeping the institution open wasn’t financially feasible, and that its outdated facilities forced it to accept low reimbursement rates from Medicaid.

“It’s a building not designed for the modern high-cost medical reality,” Winston said. Neighborhood activists object to the closing of the home, which they see as a pillar of stability in the fast-changing neighborhood.

Fliers posted throughout the Lower East Side, advertising a rally against the closing, feature a crossed-out photo of Meister. The rally, outside his real estate office, is scheduled for September 1. At an earlier rally on August 23, 80-year-old home resident Millie Mundschein addressed the crowd from her wheelchair. “This is my home,” she said, according to a report in The Villager, a downtown newspaper.

Staff members have also voiced anger over the closing.

“If everything went naturally [and] the place had no money… then so be it,” said William Quintana, nursing home recreation director. “Nothing you can do about it. But it didn’t happen that way. That’s why everyone is so upset, and we’re not going to give up the fight.”

The closing of the home and sale of the Bialystoker building would spell the effective end of what was once a cultural and social center for Polish Jewish immigrants to the Lower East Side.

Housed in an austere brick tower in the shadow of the Seward Park Cooperative, one of four iconic union-built Lower East Side apartment complexes, the home is blocks from the historic offices of the Forward.

Construction of the home was begun in 1923 by an umbrella organization of benevolent societies, known in Yiddish as landsmanschaftn, formed by Jewish immigrants from Bialystok.

During the interwar period, the center mostly existed to raise funds to send to Bialystok, according to Rebecca Kobrin, a professor of American Jewish history at Columbia University and the author of “Jewish Bialystok and Its Diaspora.” The organization’s president would visit the Polish city to assess the needs of its Jewish community, then return to the Lower East Side to raise funds.

According to Kobrin, the community claimed that there were 40,000 Jews from Bialystok in the New York area during the 1930s. Besides the center, there were two Bialystoker synagogues on the Lower East Side, one of which continues to exist on Willett Street.

Originally, the East Broadway building was to function as a community center, to be used for holding dinners and dances. That changed in 1926, when communal leadership determined that the still-uncompleted building would be used primarily as a nursing home. But the Bialystoker Center continued to fulfill a social function for decades, both as a networking spot for new immigrants and as a way for them to maintain ties forged in the Old Country.

Sam Solasz, 83, said it “bothers” him that the home will likely soon close. He arrived in the United States from Bialystok in January 1951. A butcher, he found his first American job through contacts at the Bialystoker Center. Solasz landed in the country at six in the morning and “by 10 o’clock, I had a job already,” he claimed.

Solasz was president of the Bialystoker Center’s board of directors from the early 1970s until the late 1990s. When he joined, he said, all of the members of the board were from Bialystok, though as first-generation immigrants died others were brought on.

With the home’s closing date looming, the organization is working to find new homes for the approximately 90 current residents.

It then plans to sell the building. A listing on the website of a commercial real estate broker pitches the property as a tear-down, ideal for a 70,000-square-foot residential development.

Once the home is closed, Winston said the Bialystoker Center would function as a private foundation, donating money left over from the sale to other charities.

The organization has a few more hurdles to cross. Although the nursing home has received permission to close from the New York state health department, state law requires the office of the state attorney general to review sales by non-profit corporations when those sales constitute nearly all of the corporation’s assets. Such a review would take place after the organization finds a buyer.