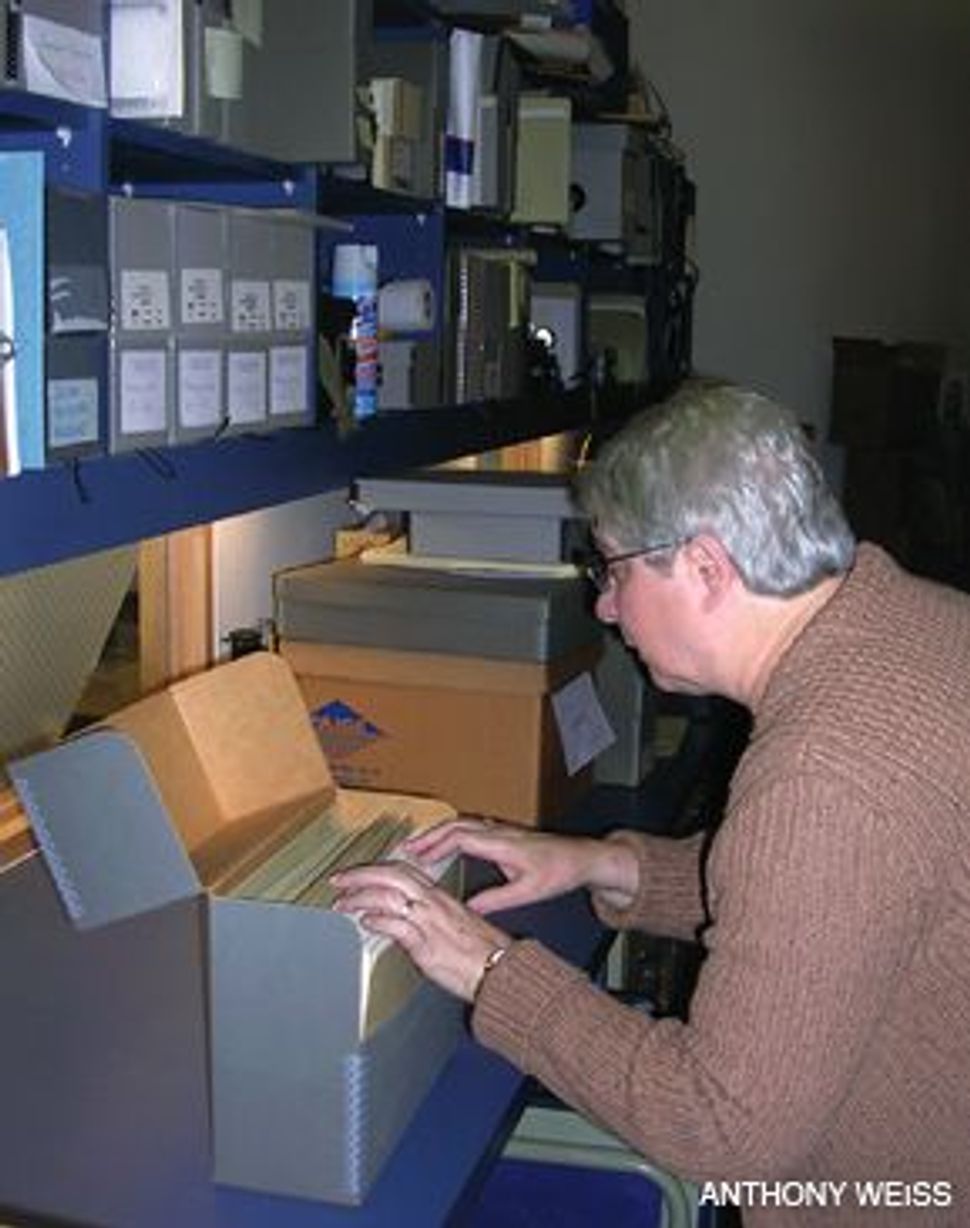 FILED AWAY: Carole Le Faivre-Rochester, the board president of the Philadelphia Jewish Archive Center, looking through documents at the archive?s current location.

Philadelphia, PA — After 36 years as a standalone organization, the Philadelphia Jewish Archive Center will be shutting down sometime in early 2009 in response to a budget crunch. Its collections, which span nearly 200 years of Philadelphia Jewish history, will be absorbed into the archives of nearby Temple University. 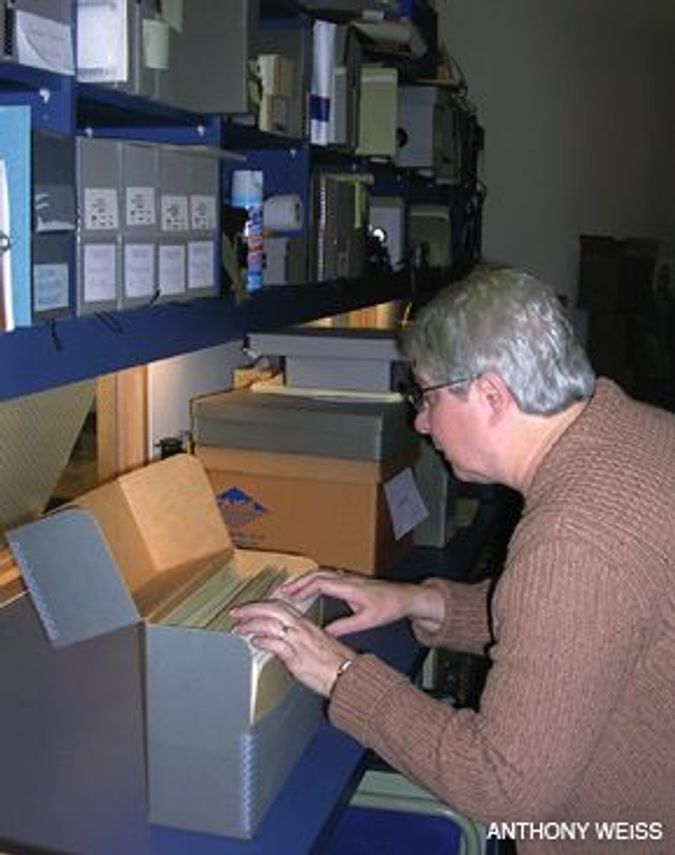 FILED AWAY: Carole Le Faivre-Rochester, the board president of the Philadelphia Jewish Archive Center, looking through documents at the archive?s current location.

“This was a decision that we did not want to make,” said Carole Le Faivre-Rochester, the archive’s president. “We wanted to stay here and be our little independent institution as we have been for 36 years. But given the climate, and the fact that we’re an archive and not that popular in the Jewish community, we couldn’t do it anymore.”

The closing comes at a particularly difficult time for small non-profits — charitable dollars are becoming scarce amidst the economic downturn. In Philadelphia, the fundraising field has been further crowded by a massive capital campaign to build a Jewish history museum. But it appears that the center’s most fundamental problem is that archives simply aren’t a big draw for local Jewish visitors or donors.

“Archives are like infrastructure — nobody wants to fund infrastructure,” said Jonathan Sarna, a professor of American Jewish history at Brandeis University. “On the one hand, everybody wants to see records preserved. On the other hand, they’re not really a funding priority for anybody.”

In most cities, local Jewish archives are affiliated with larger institutions, typically a university or a historical society. But the Philadelphia center has been its own organization since it was founded in 1972 after years of agitation by local historians, who worried that irreplaceable records and artifacts were being destroyed. With funding from the local federation, the archive took space in a basement at the cost of one dollar a year. It soon became the repository for the records not only of the federation but also of synagogues, Jewish organizations, and, perhaps most significantly, the Jewish Publication Society.

“In terms of the quality of the material, it’s one of the best of the local Jewish archives,” said Sarna, who has used the material for his own research. “It has very important collections of national significance.”

The archives are currently housed in a renovated factory building in downtown Philadelphia. In the modern, climate-controlled room, thousands of carefully labeled and sorted gray boxes hold the story of Jewish Philadelphia: records from Congregation Rodeph Shalom, the first Ashkenazi congregation in the Western Hemisphere; the original resolutions of the Hebrew Sunday School Society, the first organization dedicated to American Jewish education; the first Jewish cookbook, published in Philadelphia in 1871; and the only known records of the immigrant banks that thousands of Jews used to buy tickets for their relatives immigrating from Europe.

But despite the wealth of history, the archives don’t draw much foot traffic, aside from scholars, genealogists, and the occasional school group. Staffers said that on an average day, the archives can get anywhere from three or four visitors to none at all. According to Le Faivre-Rochester, that low profile in the community translates into low visibility with donors.

Since its founding, the center has scraped by on a combination of low rents, allocations from the federation, and enough donations to keep afloat. Although the board talked about creating an endowment, the money was never raised. When, in 2006, the archive was forced to renovate and move into new lodgings at market rate, the financial situation became dire.

Eventually, the center’s board decided that the institution couldn’t continue to survive on its own. After looking at a number of options, including taking space with a local synagogue, the board voted unanimously, if reluctantly, to send its collections to the Urban Archives at Temple University, located in North Philadelphia.

What makes the archive’s woes particularly striking is that the cause of Jewish history is doing quite well in Philadelphia. Just a few blocks away from the center, the steel skeleton of a new home for the National Museum of American Jewish History is rising along the city’s Independence Mall. The museum has raised over $110 million of the $150 million needed for the new building — an effort that some have argued makes it difficult for other Jewish causes to raise their own dollars.

“It’s tough when you have competitors around you who are that sophisticated,” said Laurie Kovens, a local fundraising consultant who worked with the archive writing grants. “In a time where the perception is that resources are pretty tight, and you’re just not on the map, it’s a very hard time to compete.”

In a sense, the move to Temple will solve many of the archive’s problems — the materials will be well cared for and available to scholars, and the board, which will stay intact, will be freed of the burden of fundraising to keep the collection alive. The center is currently in the process of trying to raise money to hire its own archivist for the collection.

But the center’s supporters are rueful about the move. Board member Louise Strauss said that the move seemed necessary, but she worried that the Jewish archives would cease to be able to define its own mission.

“I wish it could’ve been done a different way,” said Strauss, a retired history teacher. “Unfortunately, I think not enough people know that we exist and what we do.”