Hats Off to Marvin Hamlisch 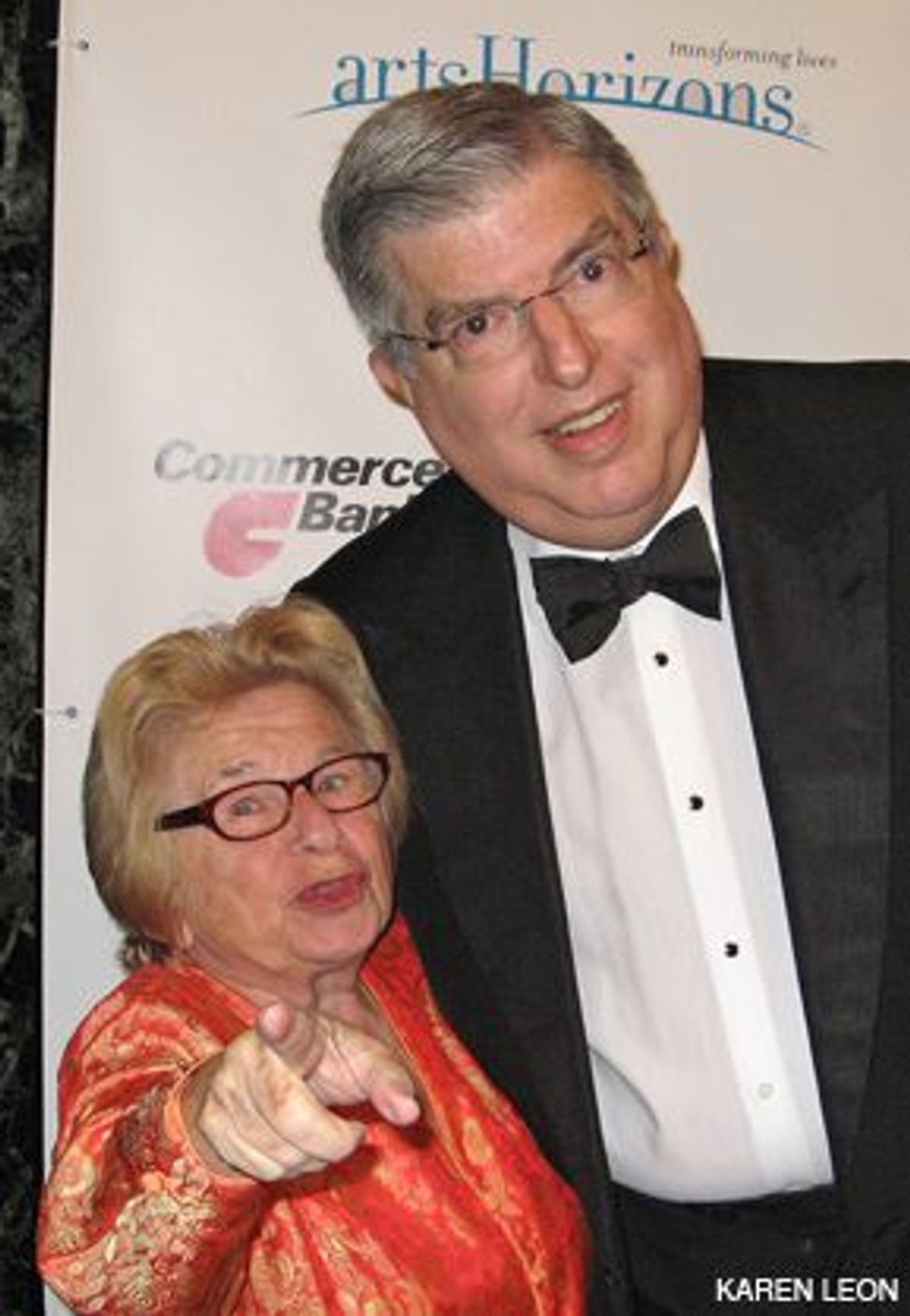 NOTHING BUT ART AT THE AMERICAN FRIENDS OF ISRAEL MUSEUM GALA 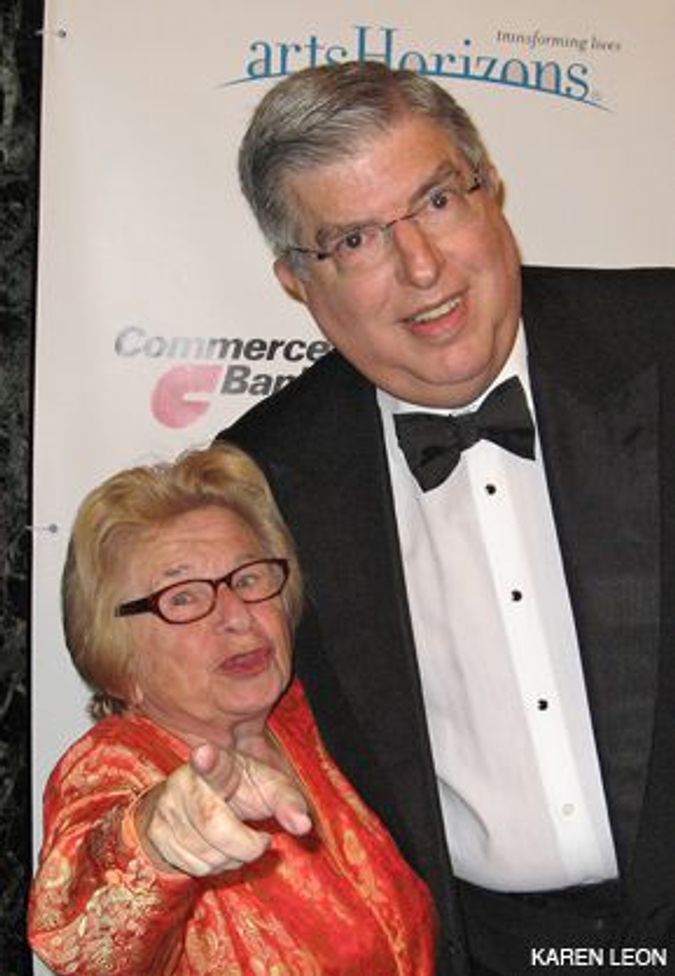 Greeting the more than 600-strong crowd at the October 27 American Friends of Israel Museum “Israel at 60” gala, held at the Waldorf-Astoria, AFIM President Stephen Lash said that “one-third of the guests in the room are under 45 years old” and that “despite the turbulent times,” nearly $3 million had been raised. James Snyder, director of the Israel Museum, Jerusalem, touted “the growing presence of Israeli art on the world landscape.” In more than two decades of event hopping, this was the first gala I can recall that had no honorees, no long keynote address and no entertainment! If you think this is unusual for a Jewish event, the invitation was a “musical” card embossed with 1948–2008. Open the card, and out blare cheers, applause and whistles! It was just a wonderful, warm, haimish celebration. Period.

Sex therapist Ruth Westheimer and composer/pianist/conductor Marvin Hamlisch hammed it up for the cameras October 27at the Broadway Salutes Arts Horizons 30th anniversary gala, held at the Hudson Theatre at the Millennium Broadway Hotel. Master of ceremonies Charles Grodin touted honoree Hamlisch, recipient of the Paul Newman Entertainer of the Year award, as “the first supporter of this organization by its founder/president John Devol, [because] it seems that Devol had a steady job in the orchestra of [Hamlisch’s] “A Chorus Line.” Grodin said. As a result, “his days were free, and he was able to build Arts Horizons [for the first seven years] without salary” from Arts Horizons. The Celeste Holm Woman of the Year award was presented to L. Marilyn Crawford, founder and CEO of Prime Time Omnimedia. Turning to the chairman of the board, Celeste Holm herself, Crawford said, gushing, “My favorite movie is ‘All About Eve.’” She credited her parents for instilling in her the imperative to “always give back, because [with] a closed hand, nothing goes out and nothing comes in. In these economic times, the one thing you can always turn to is art.”

“This is our first gala,” Peter Culver, Arts Horizons vice chairman of the board of trustees, told the guests. In touting the organization’s mission “to bring quality artistic programming into city schools,” Culver cited a recent New York Times article: “Three out of four middle and high school students didn’t take an art course.” Devol stressed “the need for professional artists to go into schools. Arts Horizons reaches 300,000 students a year.” More than 7 million children have participated in the organization’s multicultural programs over the past 30 years. Hamlisch at the keyboard, in both solo performance and accompanying Broadway star Karen Ziemba, presented a medley of his hits. He recalled visiting a school that boasted a $1 million soccer field, “but was missing one trumpet! When budgets get cut in schools, the arts are the first to go!”

“Because of her actions, the world is a better place,” said Princess Yasmin Aga Khan as she presented the Rita Hayworth Award to philanthropist Lily Safra, at the October 28 Alzheimer’s Association Rita Hayworth Gala, held at the Waldorf-Astoria. Safra lauded the princess, “who lost her mother, Rita Hayworth, [to Alzheimer’s] and cared for her. Without her fundraising, we would know less [about the disease].”

“Alzheimer’s is not a charity but a responsibility,” said Allen Brill, CEO of Rolex Watch USA (which underwrote the gala). He joshed: “If they could have it their way, bar mitzvah celebrants would tell grandparents, ‘I’d prefer a Rolex.’” Labeling Alzheimer’s “the longest, cruelest, goodbye,” corporate award recipient Frank Bennack, vice president and CEO of The Hearst Corporation, added, “It is an elusive disease, affecting 5.2 million Americans and 10 million caretakers — husbands, wives, sons, daughters… with a new case every 71 seconds!”

In keeping with the theme of this gala, “After 25 Years…A Sparkling Silver Celebration,” the Waldorf-Astoria ballroom was transformed into a silvery-white shimmering fairyland with long white wisteria branches dipping down from the ceiling above the dance floor, impressive white orchid centerpieces and, onstage, an ongoing replay of screen-size images of Hayworth. Among the gorgeously gowned guests who followed dress instructions — “silver, white or ice blue attire preferred” — were Denise Rich, Nurit Kahane Haase, Vera Wang, Muffie Potter Aston, Margo Catsimatidis, Andrea Stark and Ivana Trump.

Had there been an “Is there a doctor in the house!” call in the Waldorf-Astoria at the Lenox Hill Hospital’s October 20 ball, there would have arisen several hundred responders, in every imaginable specialty, from among the 840 black-tie guests. Robin Roberts, co-anchor of ABC’s “Good Morning America,” was the recipient of the hospital’s Medal of Honor. Remembering how her colleague, ABC film critic Joel Siegel experienced a “valiant battle… if only he had gotten a colonoscopy at 50 instead of 53,” Roberts chronicled her own journey from “an ultrasound that found a tumor a mammogram failed to detect, to surgery, chemo.… Cancer is no more but a chapter in my life — not my life. I am proof that ‘the beat goes on.’” She paid tribute to her surgeon, Dr. Lauren Cassell, whose skill enabled Roberts to accept the award in a deeply revealing V-neck chiffon gown.

Lenox Hill, which delivers an average of 4,000 babies a year and, according to the 2008 U.S. News & World Report survey, is ranked among the nation’s top hospitals in heart and heart surgery, has come a long way from its beginnings. Founded in 1857 as the German Dispensary at 132 Canal Street, its founders (both listed in the Universal Jewish Encyclopedia) were Dr. Abraham Jacobi (1830–1875), the oft-called “father of American pediatrics” and Dr. Ernst Krackowizer (1821–1875). Arrested for his involvement in the 1848 German insurrection and imprisoned for two years, Jacobi fled to England. He came to New York City in 1851. Out of humble roots, Jacobi built a stellar, innovative career. He is credited with the invention of the laryngoscope and was one of the first Americans to use the diphtheria anti-toxin in practice. Krackowizer, also involved in the 1848 insurrection, is noted for being the first in Vienna to experiment with the effects of chloroform — on himself!

Hats Off to Marvin Hamlisch