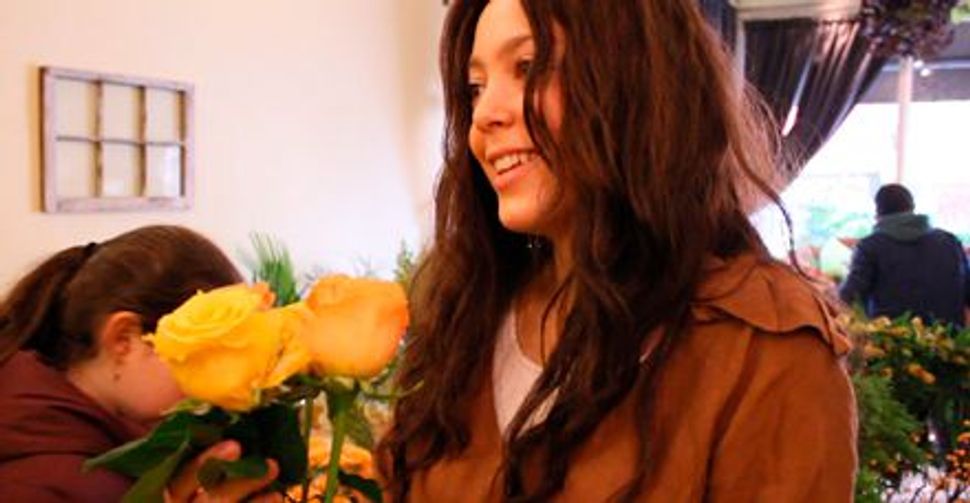 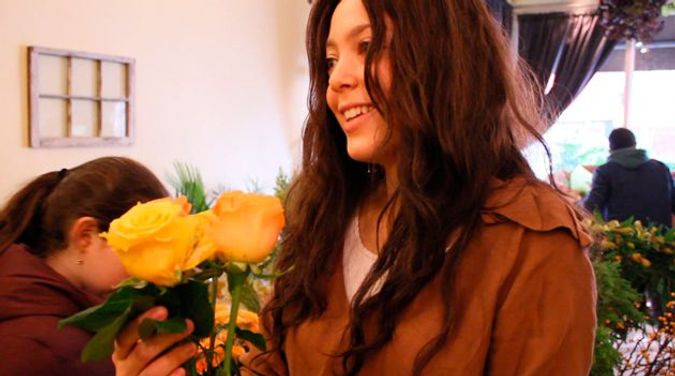 Flower Girl: Mookie Cohen, who works in a Crown Heights flower shop, is one of thousands of women named after Chaya Mushka Schneerson, the late wife of the Lubavitcher Rebbe. Image by nate lavey

If in the coming weeks you happen to meet a young woman called Mushkie, here are a few things you should know:

Mushkie is probably younger than 24. She is most likely consumed with her upcoming wedding or her young children.

One more thing: “You have to say the last name when you are talking about Mushkie,” said Mushkie Bronstein, 20, “because everyone’s called Mushkie.”

Mushkie — or to give her full name, Chaya Mushka — is one of thousands of girls in the worldwide Lubavitch Hasidic community named after Chaya Mushka Schneerson, the wife of the Lubavitcher rebbe, Menachem Mendel Schneerson. Born Chaya Moussia (“Mushka” is the diminutive), Schneerson died, childless, 23 years ago, on February 10, 1988.

In the months that followed, hundreds of Lubavitch parents named their daughters Chaya Mushka. On the first anniversary of Rebbetzin Schneerson’s death, the rebbe was presented with an album of namesakes born during the previous year — 324 Chaya Mushkas from across the world.

Mushky Duchman, born in August, 1988, in Brooklyn was among them. “The rebbe was our leader and when the rebbetzin passed away, it was the greatest thing to give back to the rebbe,” Duchman told the Forward.

During the 1990s in Crown Heights, Brooklyn, where the Lubavitch movement has its world headquarters, schools were flooded with Chaya Mushkas. Duchman said that at her Beth Rivkah school in Brooklyn, about 75 of the 120 girls in her grade were called Chaya Mushka.

Rishe Deitsch, senior editor of a Chabad women’s newsletter, said distinguishing between Chaya Mushkas at school only became a problem when cousins shared the same surname. “Then you start going by the street [they live on],” Deitsch said, “like Chaya Mushka Crown or Chaya Mushka President.”

“We always requested to be in the same class and everyone got us mixed up,” said one of the 22-year-old Avtzons who recently married and officially became Mushky Edelman.

Even today, now that one of the Avtzons has given up her maiden name, the two women still receive each other’s phone calls and text messages, or those meant for their 21-year-old cousin, Chaya Mushka Avtzon, who also lives in Crown Heights.

Mushka Katzman, 21, a classmate of the two Avtzon cousins, recalled how a teacher at the Lubavitch high school they attended avoided confusion by asking both girls to choose their favorite shape. Then each could sign off on her test paper in a different way, one with a star and one with a heart.

Every Mushkie has a story about her name being called out and a group of Mushkies turning around. Mushkee Efune said that when she was at Beth Rivkah school, in Brooklyn, older girls would call down “Mushkie” from the school’s fourth-floor windows and watch as scores of little faces in the playground turned upward.

“The older I got, the less I turned around,” said Efune, 22. “I ignored every ‘Mushkee!’ unless it was specifically for me.”

Today, like Efune, many of those little girls are starting families of their own.

Leah Gansberg, a Crown Heights matchmaker, said almost one-third of the 200 women on her list of eligible brides are Chaya Mushkas.

“The joke is, if I don’t remember the name I say, ‘Oh, it’s probably Chaya Mushka’ — and I am usually right,” said Gansberg, who has an 18-year-old daughter and three nieces called Chaya Mushka.

Even so, Gansberg added, Chaya Mushka is not as popular for girls as the name Menachem Mendel is for boys. That name became increasingly popular after the rebbe died in 1994. “In my son’s class, I would say about 90% [of the boys] are called Mendy,” Gansberg said.

There are no figures for the number of Chaya Mushkas worldwide. But the name appears to have been similarly popular overseas, at least according to Mushka Afrah, from Milan, Italy, and Mookie Cohen, of Sydney, Australia, both of whom now live in Crown Heights.

According to Jewish tradition, two girls in the same immediate family cannot share the same name. And Crown Heights residents say neighborhood schools have only a fraction of the Chaya Mushkas today that they experienced during the 1990s. So it’s possible many of the Chayas listed on the health department’s statistics have different names, such as Chaya Rivka or Chaya Sara.

Sheina Margolis, a preschool teacher at Beth Rivkah, said of the 15 girls in her class, only two are called Chaya Mushka. But the name is the most popular among the school’s 20 or so teaching and administrative staff, almost half of whom are named Chaya Mushka.

“My daughter’s teacher is Mushkie,” Margolis said. “Next door to her is a Chayale and a Mushkie. The secretary in the office is Chaya Mushka.”

Even the school building has links to Rebbetzin Schneerson.

One month after she died, Beth Rivkah broke ground on a new 125,000-square-foot campus at 470 Lefferts Avenue, in Brooklyn. According to the school’s website, 470 is the numeric equivalent of the rebbetzin’s name. The facility is called Campus Chomesh, an acronym of the Hebrew initials Chaya Mushka Schneerson.

For most Lubavitch girls, Rebbetzin Schneerson epitomized the perfect wife: quiet, kind, selfless, modest, humble, generous, private. So private in fact that, as any Mushkie will tell you, there are very few photographs of her — a startling fact given the mountain of photos and videos of her husband.

The most ubiquitous photograph is a black-and-white image taken at a wedding in New York, in 1949. Mrs. Schneerson, wearing a floral hat perched atop a pretty face, is captured looking across a table. She has an aquiline nose, a thin upper lip and an elegantly curved jawline. Her expression is serious, as though she is listening attentively.

Every Lubavitch girl has a story about “the rebbetzin.”

There was the time a guest at the Schneerson home knocked over a drink, and to avoid embarrassing her, she knocked over her own drink, too. Or the time her driver passed a family being evicted, so Schneerson asked him to pull over. She immediately wrote a check for the rent they owed. Then there was the time she was asked by a child where her own children were, and she replied: “The Hasidim are my children.”

Perhaps her greatest act, in many young women’s eyes, was marrying Menachem Mendel Schneerson, who went on to become the seventh and last Lubavitcher rebbe.

Chaya Mushka was the daughter of the sixth Lubavitcher rebbe. If not for her marriage to Menachem Mendel Schneerson, he may never have become the rebbe. And if Chaya Mushka had not allowed him to devote almost all of his time to the Lubavitch movement, he may not have been able to create one of the fastest-growing movements in Judaism today.

“She was someone so special and she gave us the rebbe, who was the greatest leader since Moshe Rabbeinu [Moses],” Duchman said.

“It’s very special to me and to everyone who’s part of Chabad.”