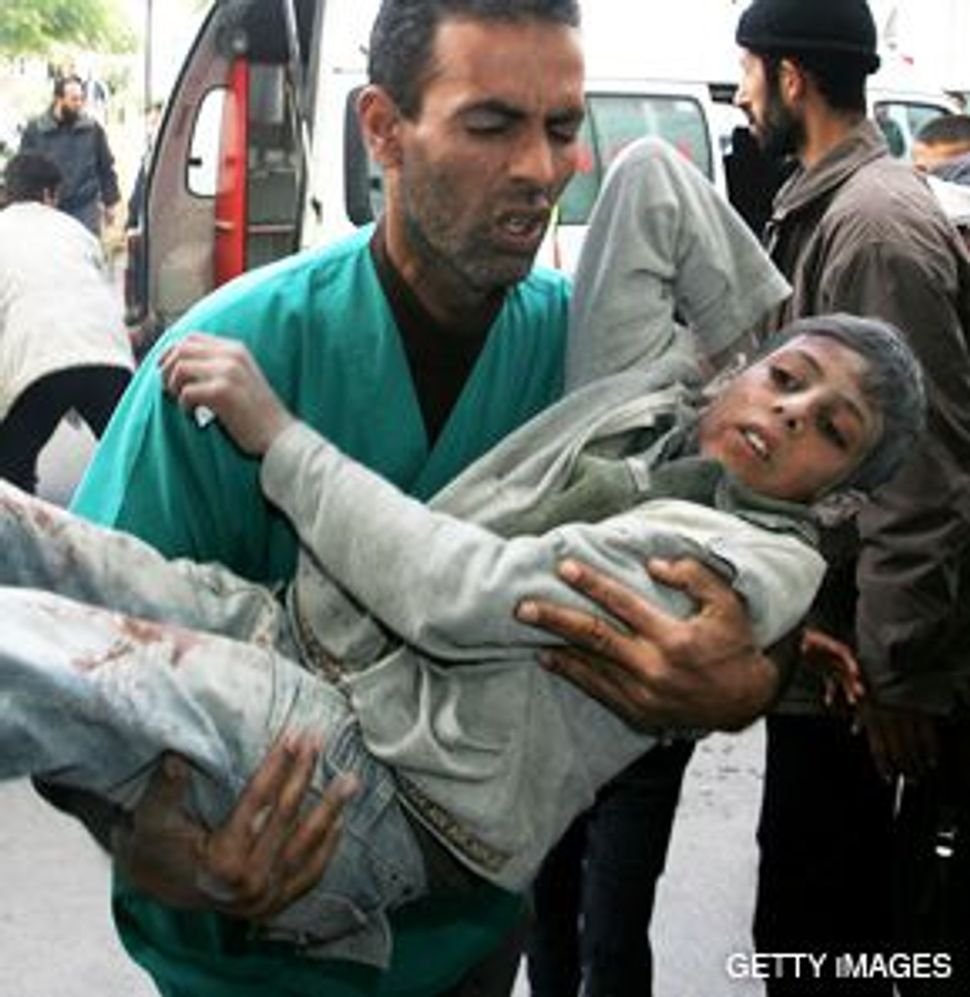 INJURED: A Palestinian medic carries a boy wounded in an Israeli airstrike into a hospital in Beit Lahia, in northern Gaza on January 14. Human rights groups allege that Israel has impeded the evacuation of the wounded who need medical attention. Israel claims it allows the injured access to hospitals.

Tel Aviv — On January 14, Israeli human rights groups issued a detailed report alleging serious human rights violations by Israel’s military in its three-week campaign in Gaza against Hamas. But Israel rejected the allegations and continued to notch up its effort to lay the blame on Hamas for the harm suffered by civilians during its military effort. 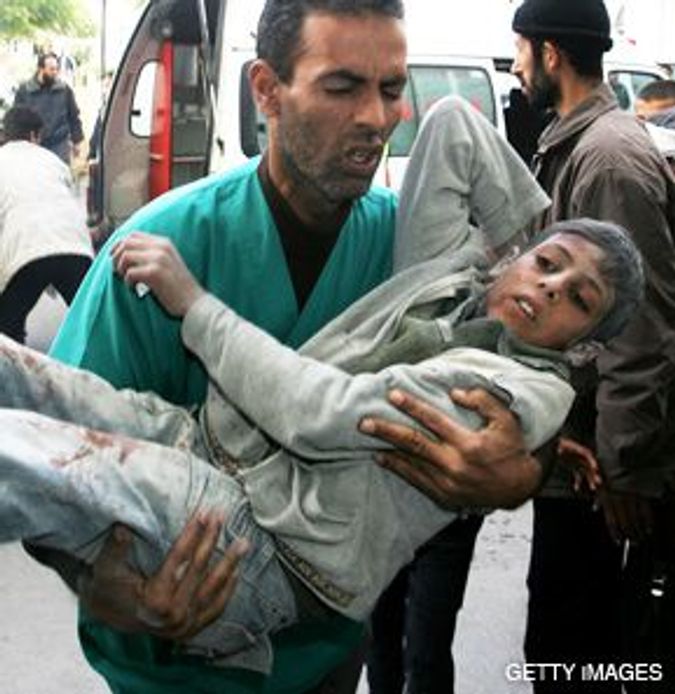 INJURED: A Palestinian medic carries a boy wounded in an Israeli airstrike into a hospital in Beit Lahia, in northern Gaza on January 14. Human rights groups allege that Israel has impeded the evacuation of the wounded who need medical attention. Israel claims it allows the injured access to hospitals.

The coalition of nine human rights organizations, which included Physicians for Human Rights, the Israeli section of Amnesty International and the Public Committee Against Torture in Israel, charged that Israel’s conduct “constitutes a blatant violation of the laws of warfare and raises the suspicion, which we ask be investigated, of the commission of war crimes.”

Israel claims that although it does everything possible to avoid harm to civilians, they are inevitably harmed, because Hamas uses civilian buildings, including schools, hospitals, mosques and private homes, for operations and for weapon storage.

The human rights groups’ charges and Israel’s responses represented a significant increase in the profile of Israel’s human rights conduct in Gaza, even as pictures of carnage and human suffering there drove tens of thousands to the streets in Europe and elsewhere in protest of Israel’s campaign. Israeli public support for Operation Cast Lead, meanwhile, remained strong.

In a letter addressed to Prime Minister Ehud Olmert and an accompanying report based on their own information gathering, the human rights groups offered some of the most detailed — if often unconfirmed — allegations of human rights violations to date:

• In six cases, the army shot at medical teams. Twelve medical personnel have been killed, and 17 were injured.

• In 15 cases, the army attacked medical facilities, including a medical supply warehouse, three mobile clinics and a mental health center. The groups assert that there were “direct attacks” on the European Hospital and the Dura Hospital, among other buildings.

• In most cases, the army does not respond to requests for coordination with medical teams to evacuate or transfer casualties. When it does respond, there are delays of anywhere from two to 10 hours. In one case, the groups state, a family of 21, six of whom were injured, waited seven days until the army allowed Red Cross representatives to evacuate them.

• Damage inflicted by the military on Gaza’s electrical production and sewage facilities has left residents without electricity for essential purposes, and in danger of infection from threat of untreated wastewater flooding.

Israel states that during the conflict, it has facilitated the movement of 800 trucks — totaling more than 25,000 tons — of humanitarian aid into Gaza; introduced a daily three-hour cease-fire to enable Gazans to take care of their daily needs and on January 15 extended it to four hours, and made access to Israeli hospitals possible for the injured.

On January 15, the head of southern command, Yoav Galant, issued an order to create a special team to support humanitarian and infrastructural efforts. The team will assist the Palestinian civilian population in Gaza in rebuilding the infrastructure needed to conduct a regular life.

The same day, the Joint Humanitarian Coordination Center of the Coordinator of Government Activities in the Territories released a statement saying that it is working to facilitate repairs of electrical grid and sewage systems and evacuation of the wounded, and helping to coordinate medical assistance and evacuation of foreign and dual nationals.

The statement claimed the arrival in Gaza of supplies, including those used for fuel and for medical purposes, is being slowed by terrorist activities at crossings and by a “lack of organization on the part of Palestinian contractors.” The center is trying to speed up the delivery of these supplies. The statement also said that the daily humanitarian pause will be increased by an hour, and gave assurances that the center has worked to bring medical experts to Gaza.

Israel also cites steps it takes to warn civilians when a Hamas target is about to be bombed. Mainly, it sends warnings by dropping leaflets or by telephoning householders whose homes will be bombed because arms have been stored at the residence. Hamas is said to respond by ordering householders to climb onto the roof and become human shields.

The human rights groups remain unconvinced. They argue that as Gaza is blockaded, civilians have nowhere to shelter; attacks take place in isolated areas, and the army prevents local and international rescue teams from entering. The army, the groups charge, fails to assist with rescue itself, and residents lack electricity, running water and sewage systems — a combination that “creates severe sanitation problems and increases the risk of an outbreak of epidemics.”

Regarding solutions to the humanitarian problems, the “responsibility of the State of Israel in this matter is clear and beyond doubt,” it is claimed in the groups’ letter. “The army’s complete control of the battle zones and the access roads to them does not allow Israel to transfer that responsibility to other countries.”

The letter ends with a demand that Israel stop “disproportionate harm to civilians”; open a route for civilians to escape the battle zone, while guaranteeing their ability to return home at the end of the fighting; ensure that injured people receive supplies and care, whether from rescue organizations or from the army, and ensure proper operation of the electricity, water and sewage systems.

Israel’s response was curt. Andy David, deputy spokesman of the Foreign Affairs Ministry, declined to respond on specific points. He told the Forward: “As a usual practice by these NGOs, all the claims in the letter are ignoring yet again a ‘minor’ detail, [that] Hamas has taken the Gaza Strip population hostage. This is a hostage situation. They are firing at Israeli towns and cities, without any regard to any international law. By doing that, the whole responsibility for the humanitarian situation falls on Hamas.

“We did not want to go into Gaza, and even after we did, we continue the supply of aid, as well as providing a ‘humanitarian corridor’ of three hours each day.”

The letter elicited strong criticism from NGO Monitor, a Jerusalem-based organization that draws attention to what it regards as the nongovernmental organizations’ “exploitation” of human rights values for political agendas.

“These groups manipulate legal terminology such as ‘disproportionate response’ and ‘collective punishment’ in condemning Israel to the extent that their rhetoric is widely copied by diplomats, journalists and academics,” Gerald Steinberg, NGO Monitor’s executive director and chair of political studies at Bar-Ilan University, told the Forward. “In contrast, the legal issues are far more complex, and many experts argue that Israel has acted absolutely within the framework of international humanitarian law. The situation is nowhere near the black-and-white images these NGOs project.”

Contrary to the NGOs’ claims, Steinberg said, “the [Israel Defense Forces] has clearly taken exceptional measures to minimize civilian casualties.” He also said that “missions against key Hamas commanders have been called off at the last moment when civilians came too close.”

Steinberg added: “While tragic mistakes do happen, the evidence shows that the IDF is far from indifferent to civilian suffering. As a result, the cynical attacks by NGOs are seen by Israelis as motivated by ideology rather than morality.”