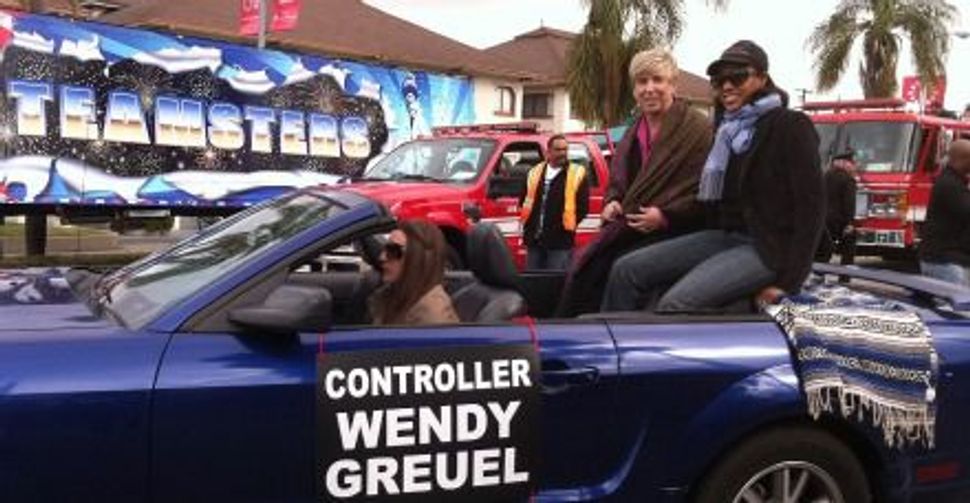 Image by courtesy of wendy greuel 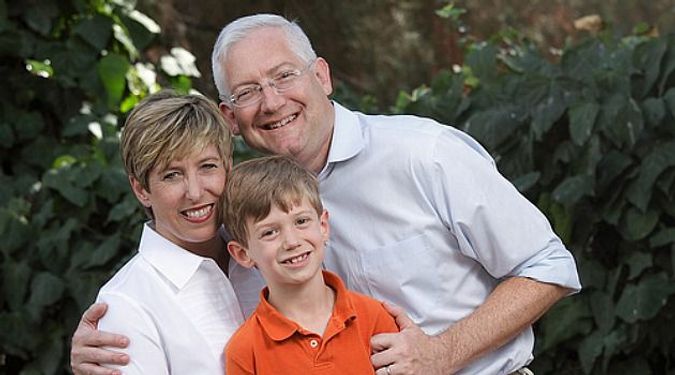 Wendy Greuel, who as Los Angeles city controller oversees the city’s finances, is the only one of four Democratic candidates in the 2013 race for mayor who isn’t Jewish, a detail that did not prevent Greuel from attending services at no fewer than four synagogues during last year’s High Holy Days.

The synagogue shuttling, as well as Greuel’s penchant for showing up at events like the Jewish Federation’s “Imagining Our Future” seminar in December, might be seen as simply good politics in a city where the 6% of the population that is Jewish delivers an outsized 16% to 18% of the vote.

But Greuel says it’s a genuine passion — and, after all, she married into the faith.

“My mom said I would marry a Jewish man,” the native Angeleno said during an afternoon interview with the Forward at a cafe in Larchmont Village, a midcity neighborhood within sight of the Hollywood sign.

She and Jewish attorney/filmmaker Dean Schramm have an 8-year-old son, Thomas, who is on the verge of entering Hebrew school at Temple Israel of Hollywood. “I just fell in love with the Jewish religion and culture,” said Greuel, who visited Israel in 2008 with a city delegation.

A kinetic 50-year-old with a signature no-fuss blond bob, Greuel was wearing a trim black suit and a mauve blouse covered by a multicolored shawl. She had just come from riding an open-topped Mustang in the Martin Luther King Jr. Day parade that chilly morning.

Describing herself as “determined and competitive,” Greuel believes that she is the one to lead the city through a historic time.

“Los Angeles is at a crossroads, and I want to give back to a city that has given me so much,” she said. “People want a mayor who is dedicated to improving the lives of its citizens. I believe it’s my time, my vision.”

A graduate of the University of California, Los Angeles, and daughter of a Christian church founder, Greuel’s political career began in the 1980s, when she was a City Hall intern during Mayor Tom Bradley’s administration, and includes a Washington stint with the U.S. Department of Housing and Urban Development. She has been married for nearly 10 years to Schramm, who is active in the American Jewish Committee.

The couple met just as Greuel was launching her hard-fought 2002 campaign for city council, representing the 2nd District and up against former state assemblyman Tony Cardenas. Dating led to door-to-door canvassing, and ultimately Schramm’s fiancée won by 225 votes.

Other Democrats vying for City Hall’s top job in this overwhelmingly Democratic town are City Council President Eric Garcetti, Councilwoman Jan Perry and First Deputy Mayor Austin Beutner, any of whom would become L.A.’s first Jewish mayor. Perry, who is African American, or Greuel would be the first woman to lead the city.

A recent poll of L.A. voters by an independent political consultant showed Greuel tied for front-runner with Garcetti (who also boasts Latino heritage) and undeclared front-runner County Supervisor Zev Yaroslavsky close on their heels. Political observers do not take the early poll too seriously, because the primary is not until March 5, 2013. Nevertheless, many view the contest as it stands today as a two-way race between Garcetti and Greuel.

A three-way race with Yaroslavsky, who boasts citywide name recognition and strong support in the Jewish community, which he developed over 30 years spent in public service, could lead to a bruising and an expensive runoff ballot. But Greuel insists she is not intimidated and sources say she has a $1 million war chest for the run.

“When I decided to run,” she said confidently, “I assumed that everyone was in and that I would become mayor.” She is the only office holder among the candidates who is choosing between her current job and a mayoral bid; both Garcetti and Perry are at the end of their term limits, while Greuel, after three stints on the city council, assumed the office of city controller in 2009.

Greuel has a knack for using public office to capture the spotlight, though often with unintended consequences. Wags tagged her “Queen of Potholes” for her promise while on the city council to repair every crumbling mile of the deteriorating roadway within her district. As L.A.’s top fiscal cop, she includes an enticing press release with every audit. Greuel’s revelation that a “Gold Card Desk” in a shadowy corner of the Department of Transportation had dismissed hundreds of city parking citations at the behest of city bigwigs made all the evening newscasts. Blowback included innuendo voiced from as high as Mayor Antonio Villaraigosa’s office that perhaps a ticket or two may have been fixed by Greuel’s own office during her city council tenure.

In any case, the resulting kerfuffle highlighted the controller’s role of protecting the taxpayer’s pocketbook against City Hall waste and corruption.

“I ruffled a lot of feathers,” she admitted. “That’s my job.”