Staple of Campus Life Now Comes at a Price 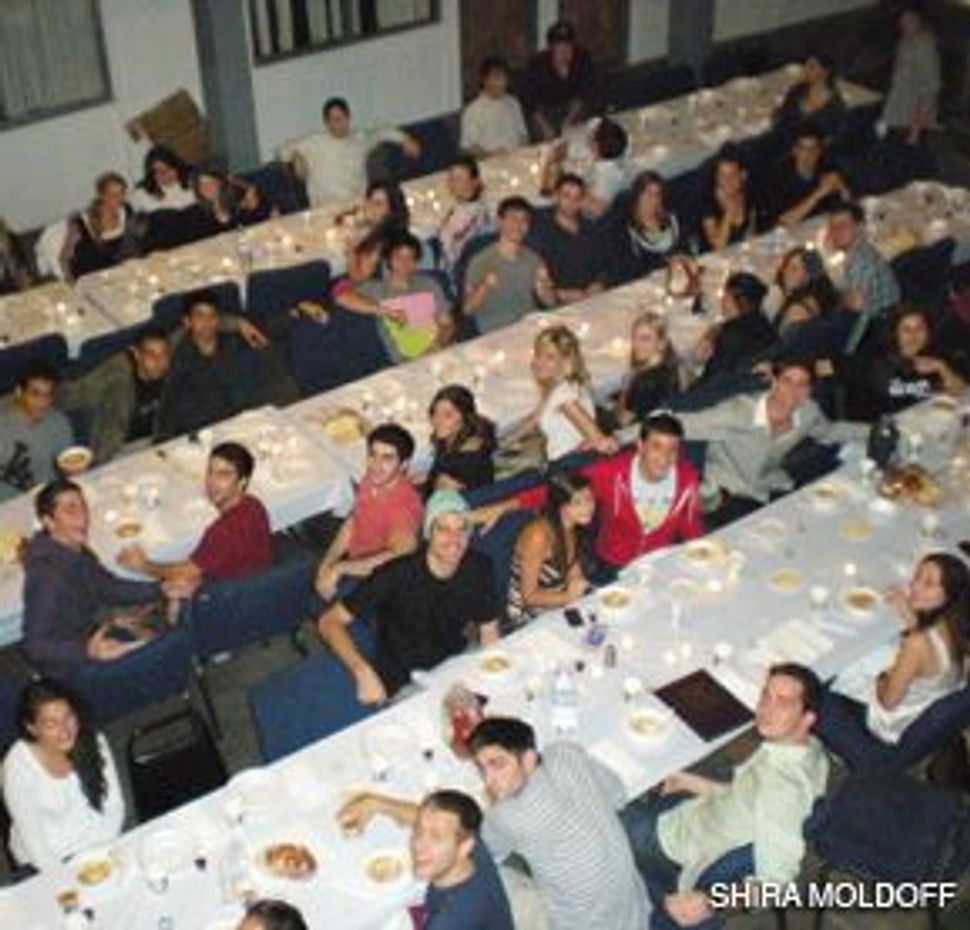 SMILE! IT'S FREE:: Students gather for a Friday night dinner at the University of Southern California, sponsored by the campus Hillel.

Los Angeles — On a rainy Friday night, nearly 100 Jewish students — and a handful of non-Jewish ones — gathered at the University of Southern California’s Chabad house to get their weekly dose of Jewish nourishment. And while the nourishment came in the form of a free meal, including homemade chicken soup, it was, by all accounts, also spiritual. 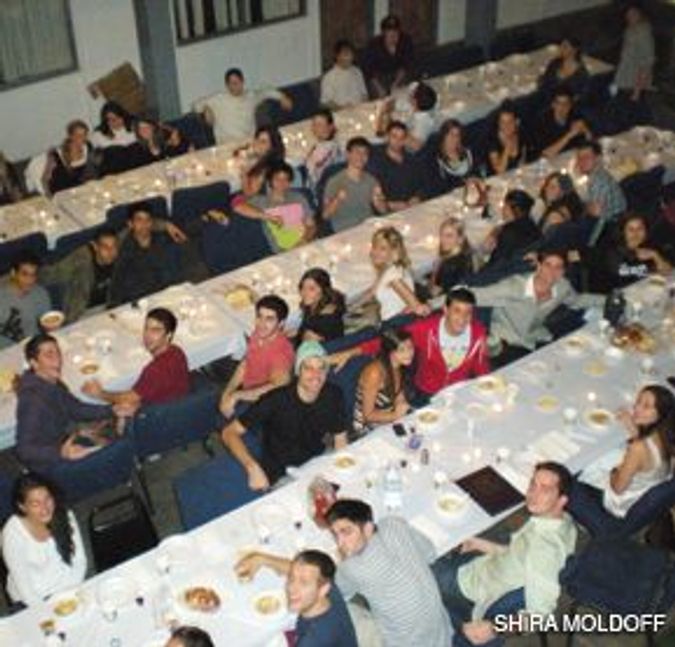 SMILE! IT'S FREE:: Students gather for a Friday night dinner at the University of Southern California, sponsored by the campus Hillel.

“People initially come for the free food, but they come back because it’s a home away from home,” remarked one attendee, USC senior Andrea Davidowitz.

Sitting amid the students crowded along cafeteria-style tables in the Victorian home’s elegant living room, Davidowitz admitted having made another stop that same night. The 22-year-old kinesiology major first dropped in at the site of another free Friday night dinner — one just a few blocks away at the USC Hillel, where she attended services.

What Hillel and Chabad have both figured out is that one of the best ways to build Jewish community on college campuses is to host weekly Shabbat meals — and, crucially, to make sure they’re free. Such dinners have proliferated in recent years, with both Chabad and Hillel houses drawing students to break bread together, recite the Jewish prayers, and — the organizers hope — have a positive Jewish experience.

But, with financial woes mounting for Jewish organizations, the dinners that have become such a staple of Jewish campus life may not be free forever. In San Francisco, that city’s Hillel — which serves 12 area campuses — has had to start charging students for what was once an understood freebie. At $1.80, the charge is far from prohibitive, but it is symbolic of the changing equation.

Students, Hillel professionals say, are now being asked to take personal responsibility for their Jewish experience and, in doing so, grasp the depth of the financial crisis that the Jewish community — as well as the broader global community — is facing.

As a result of the budget crunch, the San Francisco’s Hillel — which generally attracts anywhere from 30 to 80 students on any given Friday night — has also started cutting back on the meal itself. These days, Shalev said, they’re serving a lot more chicken, because it’s cheap as far as meat goes, and cookies have replaced pints of pareve ice cream.

Other Hillel professionals lauded the move as a step toward helping this generation of students — who are accustomed to taking advantage of free Jewish programs such as Birthright Israel, which gives young Jews all-expenses-paid trips to Israel — learn that somebody has to foot the bill for the experiences they may take for granted.

“I think students have an idea that it’s free. I don’t think they realize that somebody has to pay for it,” said Alex Kofjman, director of community outreach and leadership at USC Hillel, referring to Friday night meals. “I say kudos to San Francisco to charge even $1.80, because some students feel things are free all the time, and maybe they don’t realize the reality of the situation.”

Across town, at the Hillel at the University of California, Los Angeles, where the weekly dinner draws about 100 students and is preceded by Reform, Conservative and Orthodox services, students are now doing the cooking instead of caterers. That change was enacted in response to the economic situation — UCLA’s Hillel lost some $50,000 as a result of the Madoff scandal. The move will save UCLA Hillel about $20,000 a year, according to its executive director, Rabbi Chaim Seidler-Feller.

“The students are taking responsibility,” said Seidler-Feller. “All of this in the end may play out to be a benefit.”

Whether or not there is a charge — and whether it’s caterers or students preparing the meals — there is no question that these dinners are a cornerstone of Jewish life on college campuses. A 2006 study conducted by Jewish education scholars Barry Chazan and David Bryfman looking at the Shabbat experience at Chabad houses on five American campuses concluded that such meals offer a model for engaging young, unaffiliated Jews. That study, “Home Away from Home,” found that the dinners were so successful because “the experience was regarded as not just a physical home, but one of family. It seemed to respond to some need these young adults — who were now independent and living on their own — still had for ‘family.’” The study also found that “the actual meal — with its traditional Shabbos trappings and food — was a central factor in the experience.”

Indeed, students who attended the USC Chabad dinner expressed a similar sentiment. “I like the homey feeling, the fact that it goes on late into the night,” said Meir Basson, a 22-year-old graduate student in aerospace engineering.

Rabbi Dov Wagner of USC Chabad said that students had begun raising money to help pay for the wine served at the dinners. But, he said, despite the challenging financial climate, the campus Chabad was not cutting back or charging students for dinner. “I believe the most involved Jewish students would come anyways, even if it was a place that was charging, but the ideal is to try to reach those students that don’t put it as high on the priority list,” he said.

Indeed, even as he acknowledges that it is becoming more difficult to pay for the dinners each week, he said that USC Chabad is expanding its efforts.

“Students are very used to a culture where programs come with free food,” he said. “I don’t think anybody comes for the food per se, but if they’re going somewhere to spend an evening, it’s much more likely they’ll go if along the way it’s also taken care of that they’re having dinner.”

Staple of Campus Life Now Comes at a Price