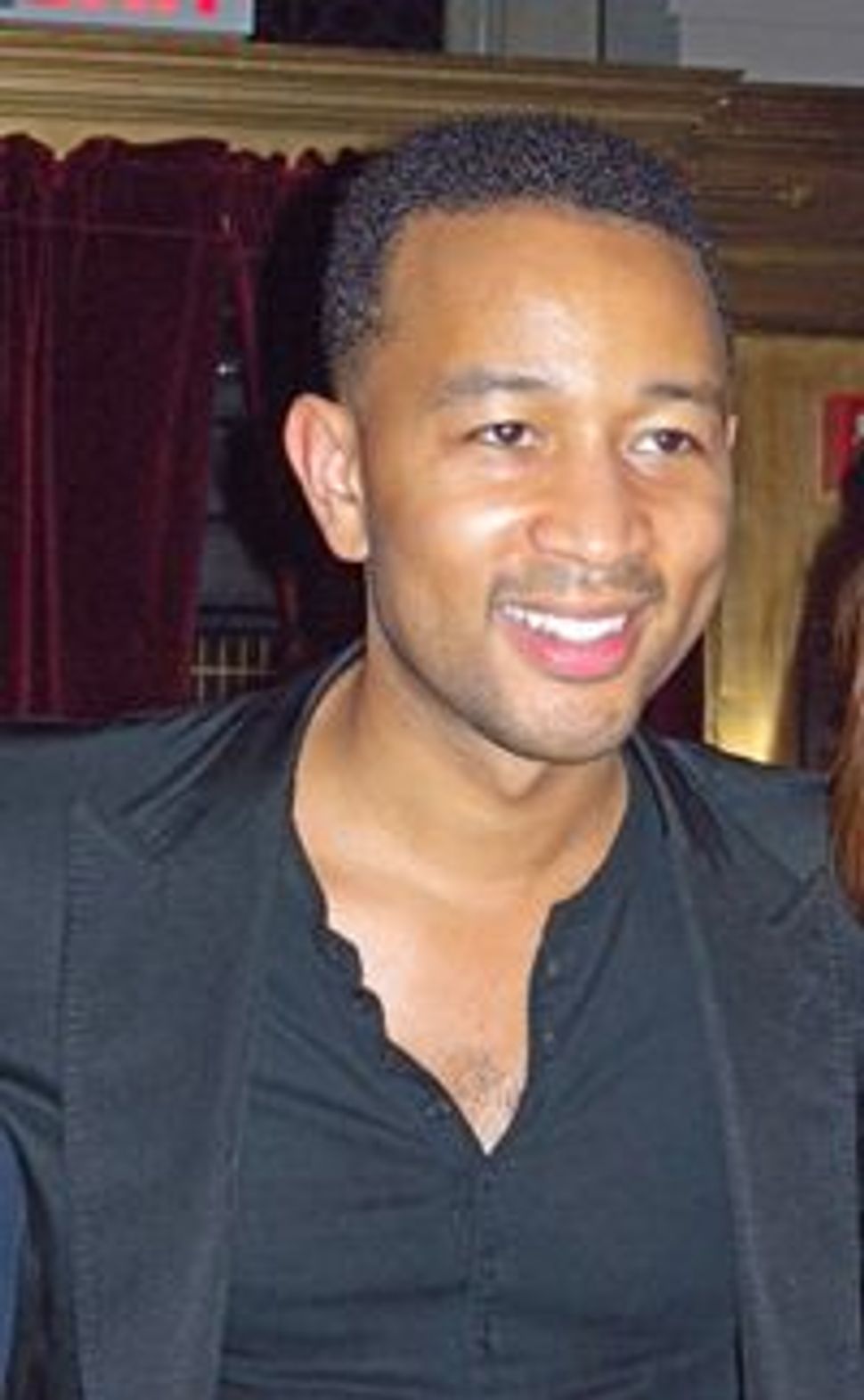 “I’m Lori Stokes!… I don’t have to yell!” the WABC-TV ‘Eyewitness News’ reporter shouted on June 6 while in the cavernous Capitale. Five hundred guests in the fields of real estate, finance, fashion and entertainment had gathered for a UJA-Federation of New York benefit, and Stokes fought to be heard above the echoing din. She told the crowd, “This morning, on ‘Eyewitness News’ at our 6 o’clock hour, I spoke about UJA-Federation… and it is not exclusive to the Jewish community, because where there is a need, UJA-Federation is able and willing to give.” She introduced event chair Lisa Silverstein, who is a newly appointed UJA-Federation board member and a senior vice president of Silverstein Properties. Silverstein announced that the chic crowd had contributed $500,000 to the $137 million that the UJA-Federation raised in its annual campaign. “I don’t care what world you live in, that’s a number!” she exclaimed.

“He’s a Grammy Award winner! He’s a New Yorker! He’s here for us!” event co-chair Marty Burger, co-CEO of Silverstein Properties, proclaimed as he introduced star performer John Legend, who sang and accompanied himself on the piano as his performance was projected onto a huge screen above the stage. As Legend was leaving Capitale after the show, he graciously chatted and posed for photos with a number of fans. The last time I met him was at the 2007 Songwriter’s Hall of Fame’s 38th annual Induction Ceremony, where he received the Hal David Starlight Award.

The event’s other chair was Ben Shaoul, president of Magnum Real Estate Group. Charlie Walk, former president of Epic Records and chairman of RJW Collective, was vice chair. DJ Questlove presided over the evening’s after-party, with some revelers celebrating long into the night.

“As someone who lost both parents to Alzheimer’s, I am proud to stand here… and so grateful to the Alzheimer’s Association,” said actor Victor Garber, host of the Alzheimer’s Association New York City Chapter “Forget-Me-Not” Gala. The event was held on June 4, at The Pierre. Alluding to his own family’s encounter with the disease, Emmy and Tony Award-winner David Hyde Pierce, who accepted the association’s 2012 Lifetime Leadership Award, joshed, “There is nothing better than getting a [crystal] bowl from Victor Garber — the first person I called to help me maneuver through the [family’s Alzheimer’s] journey.

Actor, director, writer and producer James Keach received the 2012 Public Awareness Leadership Award jointly with his wife, Jane Seymour, star of stage, screen and television. Keach said: “At 80, one of two of us will have Alzheimer’s. The [medical cost] will dwarf the military budget.” Sarah Jessica Parker was among the 550 guests. She and husband Matthew Broderick co-hosted a June 4 fundraiser for President Obama at their West Village home.

“When I was in a difficult spot with my mom, I called the Alzheimer’s organization,” said actress Jill Eikenberry, who participated in at the event along with her husband, actor Michael Tucker. Eikenberry thanked the organization, singling out Jed Levine, executive vice president and director of programs and services. Board Recognition Award recipient Neil Botwinoff, an attorney with Tannenbaum Helpern Syracuse & Hirschtritt LLP whose parents had Alzheimer’s, has provided the Alzheimer’s Association’s New York Chapter with pro bono service. The evening’s gala chair was Jonathan Teplitz, managing director and chief operating officer of the information technology division of JPMorgan Chase & Co. His dad cares for his mother, who has Alzheimer’s.

During dinner I asked Levine if he could refer me to organizations in the Jewish community that have Alzheimer’s outreach programs. He directed me to Harriet Blank, geriatric services director of Ohel Children’s Home and Family Services in the Far Rockaway section of Queens. She described the helpline, foster care and research services Ohel offers, and said, “We are getting an increased number of calls [regarding] adults in their 80s.” Chaya Leah Horowitz, of the Zicharon (Memory) Program in Crown Heights’ Orthodox community, lamented: “Unfortunately we are seeing more and more younger people in their 50s and 60s…. In May we planned a symposium for caregivers…. More than 400 came! They were hugging the walls.” Linda Eber, director of social services at Brooklyn’s Sephardic Community Center, described the center’s day care program, which has been in place for 10 years. She focused on “‘Brainworks’ social program for people in the early stage of memory loss” and on the organization’s “continuing services from cradle to grave. It is now more spoken about among the center’s main clients, who come from Syria, Egypt, Lebanon and Morocco.” Elisa Stern, director of supportive services in the Project for Holocaust Survivors at Bikur Cholim Chesed Organization in Brooklyn’s Boro Park and in Staten Island, told me about the special needs of Holocaust survivors dealing with past trauma. “As they age,” she said, “they have more time to reflect on what happened to them during the war.” The organization offers a special program for Holocaust survivors who have no children or family.

I also contacted Dr. Gary Kennedy, behavioral science director of the Division of Geriatric Psychiatry at Montefiore Medical Center in the Bronx. Kelly, who also works with Holocaust survivors, told me that the goal now is to “push back,” to slow down the onset of the disease so that the final stages are shortened. “Meds are all palliative,” he said. “Alzheimer’s is like diabetes before insulin. So we are looking for something [akin] to insulin for Alzheimer’s.”

Ela Weissberger, Terezin Survivor, Tells Her Tale at Museum of Jewish Heritage: A LIVING MEMORIAL TO THE HOLOCAUST LUNCHEON

“I grew up more non-Jew than Jew,” Ela Weissberger (nee Stein) said at the Museum of Jewish Heritage’s annual spring luncheon, held on June 7 at The Pierre. “We celebrated Christmas and other holidays,” Weissberger, who was born in Czechoslovakia and survived the Terezin (Theresienstadt) camp, was interviewed at the event by Marie Brenner, writer-at-large for Vanity Fair. She recalled landing with her mother in “Room 28” in Terezin, the “model” camp showcased by Nazis for Red Cross representatives. Little did the Red Cross workers know that behind its Potemkin village facade, Terezin was a way station for trainloads of Jews who were shipped to their death in Auschwitz-Birkenau. In July 1943, young Ela was selected to play the character of a cat in a production of “Brundibar” (Czech slang for “bumblebee”), an opera by Adolf Hoffmeister set to music by Hans Krasa, who died in Auschwitz.

Weissberger recalled: “The first performance was on September 23, 1943, in the hall of the Magdeburg barrack, right under the Nazis’ noses. Everyone in Terezin knew that [the character] Brundibar represented Hitler as we children sang the [opera’s] victory march, ‘Brundibar Is Defeated!’… Yet transports of children and adults kept leaving for the East.” After the war, Ela Stein married Leopold Weissberger, an American soldier and a survivor of Mathausen. The mother of a daughter and son, she established a design and commercial art business in Rockland County.

The event was co-chaired by museum trustees Patti Kenner and Ann Oster. Museum director and CEO David Marwell welcomed the nearly 300 guests, including 100-year-old photojournalist and author Ruth Gruber. Each guest took home a copy of “Brundibar,” retold by Tony Kushner and illustrated by Maurice Sendak (MDC Books/Hyperion, 2003). Each gift bag also included a devastatingly delicious chocolate cake, courtesy of Doris Schechter, founder of the company My Most Favorite Food.