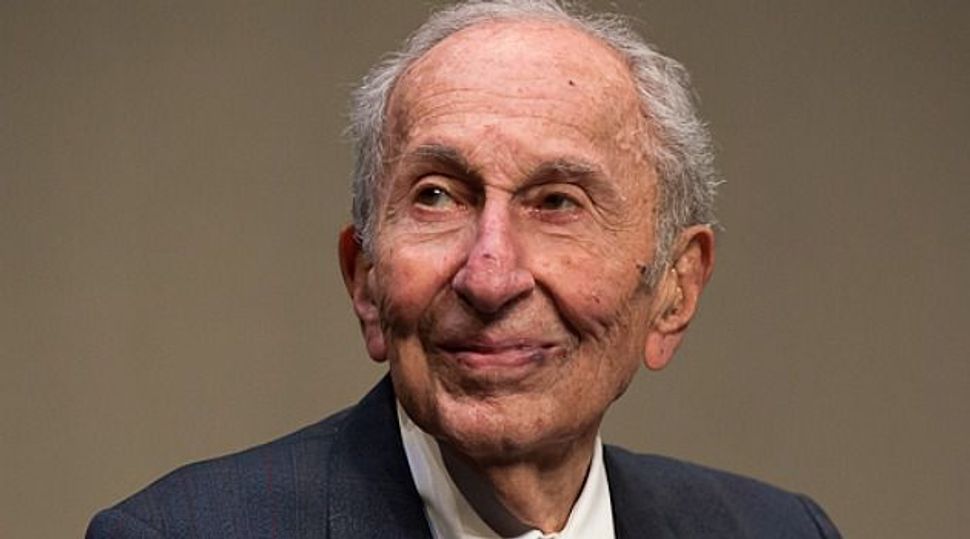 Death of a Diplomat: Max Kampelman played a key diplomatic role in enabling the emigration of hundreds of thousands of Jews from the Soviet Union. Image by Wikimedia Commons

Max Kampelman, who died on January 25 at the age of 92, was lauded often as one of the great men of our times for his role as chief U.S. arms control negotiator in the Reagan administration. He won no less praise for his diplomatic role in enabling the emigration of hundreds of thousands of Jews from the Soviet Union.

Much less noted about this humble man was the profound evolution he underwent over the course of his life.

During World War II Kampelman, who served as a conscientious objector, volunteered for the Minnesota Starvation Experiment. As part of this University of Minnesota project, Kampelman allowed experiments to be performed on him that were vital to a better understanding of how people deal with and recover from starvation — an issue the Allies were preparing to confront on a mass basis as part of the war’s immediate post-liberation phase.

But later, Kampelman rejected the pacifism of his youth in favor of support for a strong U.S. foreign policy to better promote human rights and secure peace in the world.

He grew up as the son of a butcher in the Bronx and went on to earn his law degree at night school at New York University — and then a master’s and a doctorate in political science at the University of Minnesota. It was there that he met Hubert Humphrey, who was then the mayor of Minneapolis, and, like Kampelman, a progressive social democrat. Humphrey would become a senator and a presidential candidate. Max Kampelman was with him every step of the way.

When that period of his life was over, Kampelman became a skilled practitioner of law in Washington as a member of a firm that bore his name as a senior partner. But he was always more than a mere lawyer. Max could incorporate into his very being the ability to get along with nearly everyone while making his point with deft determination.

Government service called him back when President Jimmy Carter asked him to lead talks in Madrid aimed at drawing Soviet bloc nations into the Helsinki Accords, which were signed in 1975, and which enshrined among other rights the freedom to emigrate.

It was a reflection of the bipartisan nature of his advocacy that Carter’s Republican successor, President Ronald Reagan, asked Max to stay on in his position. By 1983, Kampelman succeeded in extracting an agreement from the Soviet Union that was key in advancing the struggle to free Soviet Jewry.

Notwithstanding his stance as a military hawk, Kampelman remained at heart a staunch liberal when it came to domestic issues. He never wavered in his belief in the importance of government in protecting the poor, the elderly and, indeed, the middle class. It was this combination of views that led him to leave the Reagan administration in 1984 to advise Democratic presidential candidate Walter Mondale in 1984.

Nevertheless, after Reagan defeated Mondale, he invited Kampelman back into his administration, this time to negotiate nuclear arms reduction.

Amid all this, Max was also a mentor to me, and a role model. In actual fact, he changed the course of my professional life. When Jeane Kirkpatrick was looking for a personal counsel to represent her as she took on the arduous task of being the U.S. ambassador to the United Nations under Reagan, she turned to Max.

He, in turn, suggested that I was the person who could help navigate the shoals of the State Department and help her in her refusal to condemn as aggression Israel’s bombing of an Iraqi nuclear reactor at Osirak in 1981. I accepted the position, and Max was always at my side to provide wise counsel.

Max was a man of conscience who understood that the ideal practice of law deals with the senses and not just the mind. He reacted to injustice not as a philosophical matter but as something that affected his core.

In recognition of his lifetime achievements, he has been awarded the highest civilian accolade that the United States government can provide. But it is his spirit — his ability to pierce the veil of indifference, to help the needy, to be true to his Jewish roots as well as to America’s best ideals — that makes him a man who will be sorely missed by all who had the privilege of knowing him.

Allan Gerson is a Washington based international lawyer who served as counsel to U.N. ambassadors Jeane Kirpatrick and Vernon Walters, and as a deputy assistant attorney general in the U.S. Justice Department