Real Battle Over Western Wall Is Just Beginning in Israel 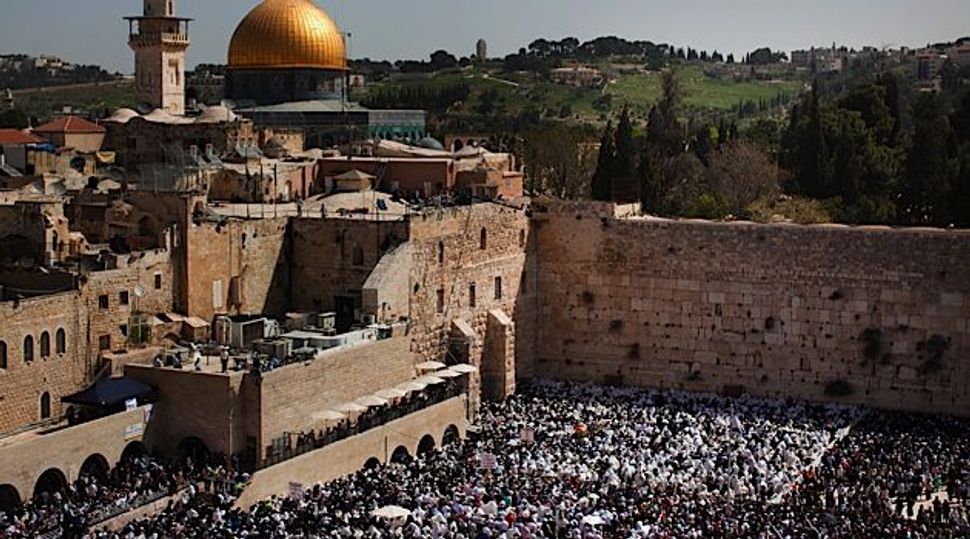 Just Beginning: Natan Sharansky?s proposal to build an egalitarian prayer section at the Western Wall is a victory for pluralism. But the war is far from over. Image by getty images

American Jews and others pushing for religious pluralism at Judaism’s most accessible sacred space may have won a major advance for their cause with the new compromise proposal put forth by Natan Sharansky. But it is only now, in Israel, that the real debate begins.

The Western Wall, or the Kotel, as it is known in Hebrew, may be the country’s most visited religious site. But for most Israelis, the campaign for gender-egalitarian prayer there is Diaspora mishegas and not their fight. None of Israel’s mass-circulation daily newspapers carried the plans for the Western Wall on its front pages. Only the less widely circulating daily Haaretz ran it on page one.

The paradoxical fact is, while most Israeli Jews are not Orthodox, on most religious matters they defer to the Orthodox, including Orthodox insistence on gender separation in public prayer. Reform and Conservative Judaism, which predominate in America, simply aren’t on their radar.

This reality means that a committed push from Prime Minister Benjamin Netanyahu and his government will be crucial to implementing Sharansky’s vision of a greatly enlarged area of the Western Wall that would be devoted to egalitarian prayer in the predominant American style. Haredi factions will resist this strongly at every stage of the project’s planning and funding. Even though the first reaction of Rabbi Shmuel Rabinowitz, the cleric in charge of the Western Wall, has been that he can “live with” the plan, Haredi rabbinic and political leaders can be expected to galvanize their community by pairing a campaign for the Wall with their campaign against ongoing plans for Haredi conscription.

And that is just the first hurdle.

Even if the plan makes headway against Haredi opposition, it may be reduced in scope during political wrangling. And if construction begins, Haredim can be expected to work hard to delay it, with legal challenges and possibly the trump card in Israeli building: a claim that there are unexplored archaeological remains that must be excavated first.

All this said, for the first time Jerusalem has acknowledged the importance of freedom of prayer at the Wall for Israel-Diaspora relations. And while Netanyahu is so sensitive to Haredi needs that he strove until the last minute to bring their parties into his governing coalition, in the end he did not. And that will make a difference.

In fact, the second-largest party in the Knesset and in the government, Yesh Atid, has shown support for Women of the Wall, and it controls the Finance Ministry. That will prove important in the project’s funding.

If the Sharansky plan does progress, another key question comes quickly to the fore: How will the egalitarian section of the Wall be given genuine status and avoid being labeled as the “add on” to the “real Kotel”? It wasn’t there that the paratroopers wept when capturing the Wall in 1967; it’s not the place Israelis picture when talking about the Wall, and it’s not the place associated with their nationalistic pride.

As Israelis become aware that they can hold bar mitzvahs and bat mitzvahs at that section of the Wall, where mothers and fathers can participate together–and if Reform and Conservative groups offer well-marketed simcha packages for such celebrations–Jews actually living in the country may eventually develop a sense of personal attachment to the new section.

But none of this is ensured. Israeli Jews’ sentiments about the Wall are heavily influenced by state-sponsored visits that brand its meaning deeply into their consciousness at formative points in their lives. Most prominently, Israeli Jews are brought to the Wall as part of their school curricula and during their army service. If these continue to take place only at the section of the Wall in use today, it alone will remain“the Wall” for most Israelis, at least on an emotional level.

Women of the Wall and its allies will need to fight hard in the political sphere to get the egalitarian section used for at least some of the identity-shaping visits that the state runs. The same goes for trips by foreign dignitaries.

Haredim can be expected to oppose this. But if the egalitarian section becomes a fact on the ground, they may surprise their fellow citizens and see the new reality as an opportunity to strengthen Haredi control over “their” Kotel section. They may, in other words, demand that it be maintained for exclusively Haredi uses. Some Haredim object to the use of the Wall for nationalistic purposes like military ceremonies, and the community’s leaders could start to argue that if the egalitarian section is run according to what they deem non-Orthodox principles, all secular and non-Orthodox events should take place there.

Real Battle Over Western Wall Is Just Beginning in Israel