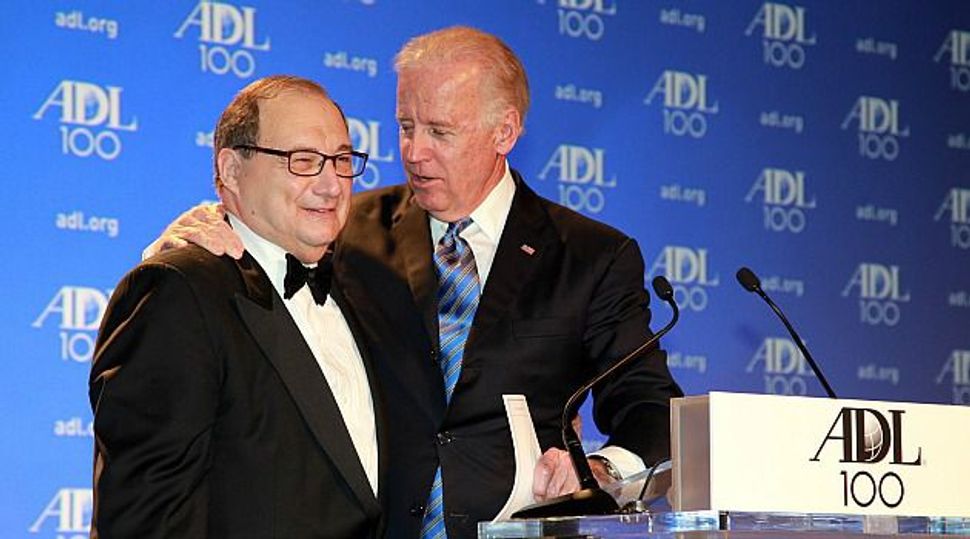 As it enters its second century, the organization identified more than any other with fighting anti-Semitism finds levels of anti-Jewish bigotry in America lower than ever. By the admission of the Anti-Defamation League’s own national director, doors once closed to Jews are now almost uniformly open, up to and including the nation’s elite corporate suites, its most selective universities and its highest political offices.

Palm Beach’s tony Breakers Hotel once barred Jews from its lobby; now it hosts the ADL’s own annual conference. “‘Mr. Breaker’ is spinning in his grave,” gibed Abraham Foxman, who after 26 years at the ADL’s helm is virtually branded as its public face.

Perhaps, as it marks its 100th anniversary, this organization, which has done so much to expand Jews’ equal access to the America dream, could declare its mission accomplished and hold a celebratory fire sale.

But to no one’s surprise, the ADL is not about to do so. It instead sees an entire new world of concerns for American Jews, a world in which white-hooded Klansmen are replaced by anonymous bloggers spreading hate on the Internet, and in which minority communities espouse prejudices against Jews that have already been eradicated in other parts of America.

“There aren’t many Jewish organizations that have reached 100 years,” said Jonathan Sarna, a professor of American Jewish history at Brandeis University. “You make it to 100 because you’re able to adapt, and I think the ADL has adapted.”

During Foxman’s years of leadership as the group’s national director, this ability to adapt has included a greater focus on civil rights beyond the Jewish community and, like most other national Jewish groups, a greater emphasis on supporting Israel as a key part of its agenda.

The ADL marked its centennial anniversary at a gala conference in Washington that ran from April 28 to April 30 and was attended by 1,000 activists. Participants got a chance to hear Obama administration officials, including a surprise address from Vice President Joe Biden, and to attend lobbying meetings on Capitol Hill and in the White House and the State Department.

Perhaps the most memorable moment of the centennial celebration was an 80-second video titled “Imagine a World Without Hate” produced by the ADL for its anniversary. The clip, which already has surpassed one million views on YouTube, imagines a reality in which individuals murdered because of their beliefs, race or sexual orientation — including Martin Luther King Jr., Anne Frank, Harvey Milk, Daniel Pearl, James Byrd, Matthew Shepard and Yitzhak Rabin — were still alive. On April 29, ADL leaders had the opportunity to show the video to Biden and to President Obama in a meeting at the Oval Office.

The video sheds light on today’s ADL, which spends much of its budget and human resources on fighting bullying and discrimination beyond the Jewish community. But for all that, Foxman, now 73, is still best known outside the Jewish world as the go-to arbiter on anti-Semitism. It’s a role he says he doesn’t seek, but one from which he doesn’t shrink.

“I’m not the pope,” he said affably, “but hey, I am a Holocaust survivor who has spent his life fighting anti-Semitism.”

Indeed, Foxman’s personal history of surviving the Holocaust as a child in Poland, his engaging and expansive public persona, and his position as head of the nation’s largest Jewish defense organization have won him media prominence and credibility. This has brought his face on the evening news at one time or another into almost every home in America.

In his role as the ADL’s public face, Foxman has labeled film director Mel Gibson an anti-Semite for his depiction of Jews as Christ killers in his film “The Passion of the Christ.” He has forgiven fashion designer John Galliano for an anti-Semitic comment he spewed while drunk after Galliano himself sought expiation and forgiveness.

Foxman accused Chuck Hagel, who was at the time Obama’s nominee for secretary of defense, of making remarks that “border on anti-Semitism” about the “Jewish lobby,” as Hagel called it. On another occasion, Foxman even found himself making a call on actress Whoopi Goldberg’s recipe for “Jewish American Princess chicken soup,” which he found insensitive but not anti-Semitic.

“At this stage of the game, I don’t think I have the option,” Foxman said of his arbiter role in an April 29 interview. “This is not an exact science.” But Foxman said he’d rather make the judgment call than leave claims of anti-Semitism unanswered.

“We spend more time saying what is not anti-Semitism than what is anti-Semitism,” added Kenneth Jacobson, the group’s deputy national director, during a panel discussion at the conference.

Anti-Semitism, as viewed by the ADL, is changing its form. And while the group still makes headlines taking on celebrities and politicians for their remarks, its main focus, as it enters its second century, is on what it sees as new, more entrenched forms of bigotry.

Based on a questionnaire compiled by the ADL to gauge anti-Semitic sentiments, the group now believes that 10%–12% of Americans are “infected with anti-Semitic attitudes.” Most widespread are the notions that Jews killed Christ and that American Jews are more loyal to Israel than to the United States.

“In the U.S. we’ve reached bottom,” Foxman said, referring to the low level observed in polls, “but you cannot ignore that. Every single day we see cases of anti-Semitism around this country. Every single day.”

Today, the ADL views the African-American and Latino communities as the key pockets of anti-Semitism in America. Surveys have shown prejudicial attitudes toward Jews to be more prevalent in these minority communities than in the broader American population. While the Latino community, according to Foxman, is more open to dealing with the problem and is showing signs of improvement among second-generation immigrants, there is no progress within the African-American community.

According to the ADL, anti-Semitic sentiments among African Americans remain at a level of 30%–40% while in the general populations rates have dropped to a third of that.

“The problem in the African-American community is serious, and it is hard to do something because there is no leadership,” Foxman said. “If you don’t have role models standing up to condemn it, it is hard to deal with it.”

Hilary Shelton, Washington bureau director and senior vice president for advocacy and policy of the National Association for the Advancement of Colored People, pronounced himself “a little taken aback” by Foxman’s comments.

“I’m not sure where this is coming from,” he said in response. Shelton said he did not come across anti-Semitic incidents in his community, and that his organization and others speak out frequently against “anything that is disrespectful toward Jews.”

Foxman pointed to the continuing attraction exerted by Nation of Islam leader Louis Farrakhan, with his long record of anti-Semitic remarks, over large numbers of blacks. “I don’t know of any other African-American leader who can gather a crowd of 20,000,” he said. “Jesse Jackson, Al Sharpton — they are not there on this issue.”

The ADL’s second front on battling anti-Semitism is the Internet, which Foxman terms a “godsend for the bigots.” It is also the topic of a new book Foxman co-authored, “Viral Hate,” scheduled for publication in June. The ADL views the Internet as its major challenge for the next 20 to 30 years and is focusing much of its effort on exposing and confronting those spreading hatred under the mask of anonymity provided by the Web. It is this anonymity, the ADL believes, that allows racists to disseminate their views without paying the societal price for bigotry.

The ADL’s domestic civil rights advocacy, including its support for lesbian, gay, bisexual and transgender rights; its anti-bullying activity, and its sensitivity training sessions for ethnic and religious diversity, may take up the lion’s share of its budget and time. But increasingly, it is the group’s outspoken support for Israel that draws public attention.

Foxman is willing to address some of Israel’s domestic inequalities, including its lack of religious pluralism for Jewish denominations. But he has consistently refused to discuss Israel’s human rights record when it comes to the Jewish state’s treatment of Palestinians in the West Bank.

“We don’t see occupation as a violation of civil rights,” he said in an interview, adding that claims of abuses are used “as a club against Israel and [are] clothed in apartheid civil rights.”

The ADL, like other membership-based national Jewish organization, is struggling to find its way forward financially these days. The group is slowly recovering from a drop in donations following the 2008 financial downturn and has begun rehiring after a period of layoffs. But it still faces an uphill battle in convincing Jewish Americans to support an all-in-one group that deals with a variety of issues, from Israel to civil rights.

Such groups once formed the backbone of American Jewish life. But today, single-issue organizations such as the American Israel Public Affairs Committee and J Street are thriving, while the ADL and similar organizations are working hard to find their footing.

As for his own plans, Foxman, already accustomed to being questioned on how long he’ll remain at the group’s helm, quickly pulled out one of his one-liners that have made him a media favorite. “Whenever I find something else to do, I’ll let you know,” he replied.