A China Set That Held a Family’s Memories 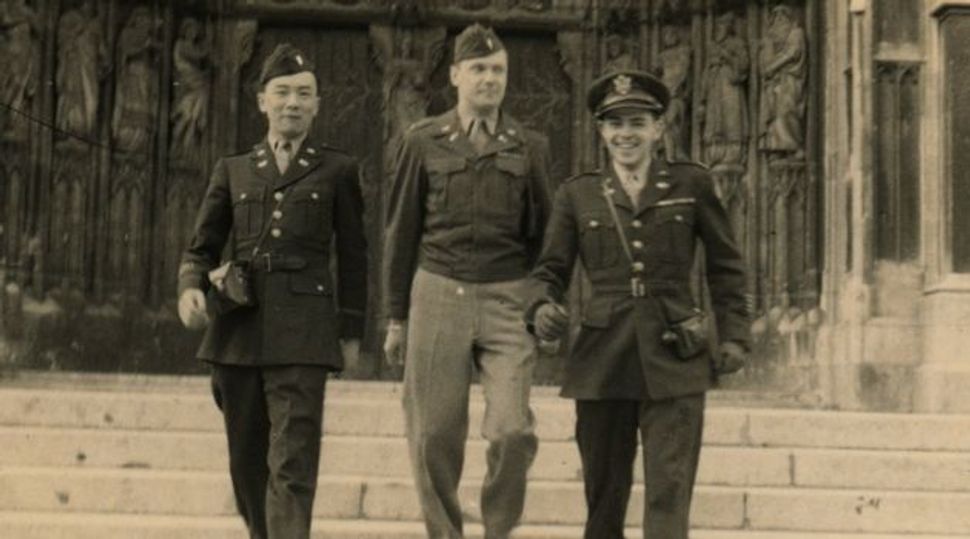 Man in Uniform: David Mark Olds (right) served in America?s occupation of Vienna, where he bought the tea set. Image by Courtesy of Sally Wendkos Olds

It was our 53rd wedding anniversary, which we celebrated with a special dinner at home, as we often did, and I had just poured steaming espresso into the blue-and-white translucent cups that we saved for very special occasions.

As we sat down to sip our coffee, David looked at the demitasse cups and the pitcher and creamer, and that wonderful sugar bowl with the delicately sculptured rose on the lid, and reminisced once more about the way he had acquired this set of Meissen porcelain. I liked seeing the dreamy expression on his face as the memory came back to him. I would envision him as a young soldier, serving in America’s occupation of Vienna after World War II.

“I knew nothing about fine china,” he said. “So when this old man in the shabby clothes that were too big for him came up to me with a cardboard box and offered to sell me this set, I didn’t know what to do. He told me, ‘Sehr wertvoll — hergestellt in Deutschland’ [‘Worth a lot of money — made in Germany’].”

“I just stood there on the street corner, looking at the cup and saucer he held up to the light. And then when he said he would take a couple of cartons of cigarettes for the whole set, I thought, ‘What the hell?’ and I bought it. As ignorant as I was, I knew that it had to be worth a lot more than the Camels I had just bought at the PX [the post exchange, a military store].”

David stopped speaking for a moment, picked up his cup and said, “That old guy was probably selling the most valuable thing he owned.”

David had told me how conflicted he felt being a Jewish soldier in Vienna, which, he said, had been even more anti-Semitic than Germany, and how he would look at the Austrian civilians and wonder what they had done during the war.

Still, he felt sorry for the few local people he came to know. Now, just after the war, things were very tough. With the economy and the infrastructure all torn up, there were few jobs. The winter was cold, and heating material, mostly wood, was expensive. The best jobs were with the provisional Austrian government and the occupying forces, but there weren’t nearly enough of them.

The others had to scrounge. Some women became full- or part-time prostitutes, and men would chop wood in the forests, travel far out to buy farm produce to sell in the city, or in other ways make themselves generally useful.

“After I bought the Meissen, I saw that funny little man from time to time,” David told me. “I admired his enterprise in scratching out a living in those days of mass upheaval and uncertainty, and whenever I saw him I wondered whether that china had been in his family for a long time and whether it had been hard for him to sell it. I kept feeling guilty about how little I paid for it.”

Now I, too, have been feeling guilty about that china, which became a celebratory ritual in our marriage.

That anniversary dinner may have been the last time we drank from those blue-and-white cups. Just before our 54th anniversary, David went to get bagels and lox on a Sunday morning and never came back. I found him in our car, in the parking lot of the bagel store, key in the ignition, the bag of bagels and lox beside him. He looked as if he were taking a catnap, as he was known to do from time to time — but in actuality he had suffered a stroke and had not regained consciousness. Four days later he died.

I needed to move from the Long Island house that after more than 40 years suddenly seemed too big and too lonely. This was the house in which David and I had made love and raised three daughters, and we never seemed to throw out anything from it. Downsizing from those eight rooms, attic and basement felt more insurmountable than summiting Everest, but I did it.

We had talked for years about moving back to Manhattan. Now, with every room in the house full of him, I had to make the move alone. With help from family and friends, I got rid of whatever I wouldn’t have room for in the new apartment.

We schlepped box after overflowing box to antiques dealers, Goodwill and the local high school’s theater department. My late colleague Caroline Bird once said, “If you don’t miss anything when you downsize, then you haven’t done a good enough job.” I guess I did a good enough job, because things I miss have haunted me.

In my frenzied rush to pare down, I didn’t agonize over what to keep, what to discard. It was almost as if the decisions were made for me. It was only later, sometimes after months had gone by, that I found myself missing certain things — the sterling silver tea strainer in the shape of a tiny teapot, inherited from my mother; the dozens of books inscribed to me by their authors, which had joined the 1,000 or so volumes that I gave away to a local synagogue’s annual sale; some of the small artworks we had picked up on vacations — that the memories of a lifetime made tangible.

One of the things I think about the most is that set of Meissen china that we had used only a couple of celebratory times a year. None of our daughters wanted it, so I turned over the set to a dealer. Then when I called him to take it back after he had had it for two years, he told me he had just sold it.

Now I wish I had kept just one cup and saucer. I could have found a spot for them. I keep feeling that David would feel bad if he knew I had gotten rid of this. I don’t feel guilty about my new romance, but I do feel guilty about selling David’s treasured Meissen.

So what do I do now about these regrets for things? When these thoughts come up, I remind myself that my regrets are not for the things themselves, but for the meaning I invested them with. And I have come to realize that I don’t need the actual objects anymore — I have the memories of the people I have loved and the good times I have had, and I’ll always have these mental keepsakes to visualize and savor. No one can take them away from me. I don’t need to find a place for them or to dust them. I can run movies in my mind anytime I want, and revisit the times and the people they represent. Letting go of my attachment to these things has made me feel a little better every day.

Just as the man who sold my husband the china might have replayed his memories of fine times after the cups and saucers left his hands, I sometimes smile as, in my mind’s eye I see David and me enjoying moments together. And I do know now that my loving husband would feel worse about my guilt feelings than about my selling the china.

Sally Wendkos Olds is co-author of “The Complete Book of Breastfeeding” (Workman Publishing Company, fourth edition, 2010) and the author of Super Granny: Great Stuff To Do With Your Grandkids” (Sterling, 2009). She is writing a book for people whose partner died at least a year ago.

A China Set That Held a Family’s Memories