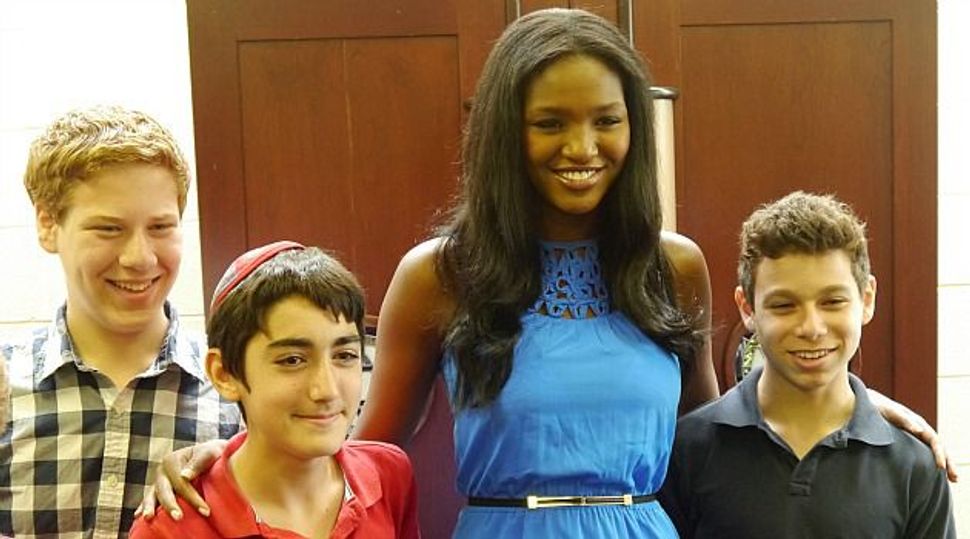 When Miss Israel, Yityish Aynaw, entered a Solomon Schechter Day School prekindergarten class, in New Milford, N.J., a caretaker excitedly asked the children, “Do you know where she’s from?”

The adult quickly corrected the 3-year-old, explaining that Aynaw is in fact from “Eretz Israel.”

The little girl’s reaction demonstrated one way in which the distinctive background of the current holder of the Miss Israel title is playing out. For many of the children — and adults —who met Aynaw as she traveled the tristate area in June, it was a first encounter with a black Israeli Jew.

Aynaw, 21, was one of about 71,500 Ethiopian Jews who immigrated to Israel between 1990 and 2004. Born in the village of Chahawit, in Ethiopia’s Gondar Province, Aynaw immigrated to Israel at age 12, after her parents had died. She did not know a word of Hebrew. It was a transition, as she recalled, of going “from the Third World to the First World.”

In Israel, Aynaw reunited with her grandparents, who had immigrated a few years earlier. She spent time in an absorption center, and eventually settled in her grandparents’ apartment in Netanya, a coastal city north of Tel Aviv that has a large community of Ethiopian immigrants.

“I was a frightened girl who did not have a clue as to what the future holds for me,” Aynaw said in an interview with reporters at the Schechter School. “I didn’t know how I would integrate, and I didn’t think that I would ever get to do all the things I am doing today.”

Today, Aynaw — better known by her nickname, Titi — is a national icon. Since winning the beauty pageant in February, she has become a fixture on Israeli TV and in magazines, sharing time and again her heart-warming story of immigration, integration and success. But the integration of most Ethiopian immigrants in Israel has been anything but smooth. A report by Israel’s state comptroller, published last March, found that more than half of the families that emigrated from Ethiopia are living below the poverty line, double the national rate.

Interviewed by the Forward following her Miss Israel victory last February, Aynaw said that though there is racism toward her community within Israeli society, she has not experienced it. Speaking at the school on June 14, Aynaw chose to portray only the rosy side of her integration.

“Israel accepted me. Israel hugged me. I was educated there, and all the options were open for me to be what I want to be,” Aynaw said. “I can tell you the bottom line, which is that if I had not come to Israel, I can’t imagine where I’d be today. Most likely I’d already be a mother, living in a village, with no education or anything.”

Aynaw follows in the footsteps of other Israeli beauty queens who reflected demographic changes and concerns in Israeli society.In 1952, Ora Vered, an immigrant from Yemen, became the first Miss Israel of Middle Eastern Jewish descent, at a time during which tensions between Ashkenazim and Mizrahim were high. Kiev-born Jana Khodriker won in 1993, during the peak of Soviet immigration to Israel. And in 1999, when peace with the Palestinians seemed to be just around the corner, Rana Raslan became the first Arab Miss Israel.

Like her predecessors, Aynaw has been doing her share of hasbara. But the main goal of her one-week trip to the United States was not public diplomacy, but fundraising for social initiatives in Netanya, her home since arriving in Israel. She’s cooperating with the Netanya Foundation, a not-for-profit organization that aims to improve the quality of life for the city’s residents. One of its projects is to create an after-school culture and music center for kids in the low-income neighborhood in which Aynaw still lives.

Responding to the students’ questions at the Solomon Schechter school, Aynaw reminisced about her time in the Israel Defense Forces. She served as an officer and was responsible for training soldiers who were assigned to checkpoints in the occupied West Bank. Aynaw said military service was crucial for her integration into Israeli society and that it also empowered her to be confident in life. She encouraged the American students to consider going to Israel after high school and enlisting in the IDF.

The concerned murmurs of two parents in the audience in response to this suggestion made clear that it did not meet universal approval.

The head of the school, Ruth Gafni, emphasized that Aynaw’s life story is important because it demonstrates how the global Jewish community is a united mosaic of people.

“It is truly a wonderful story of growth, development and transitions that didn’t take anything away from her, but enhanced who she is,” Gafni said.

Aynaw will represent Israel in the Miss Universe competition in Moscow on November 9.