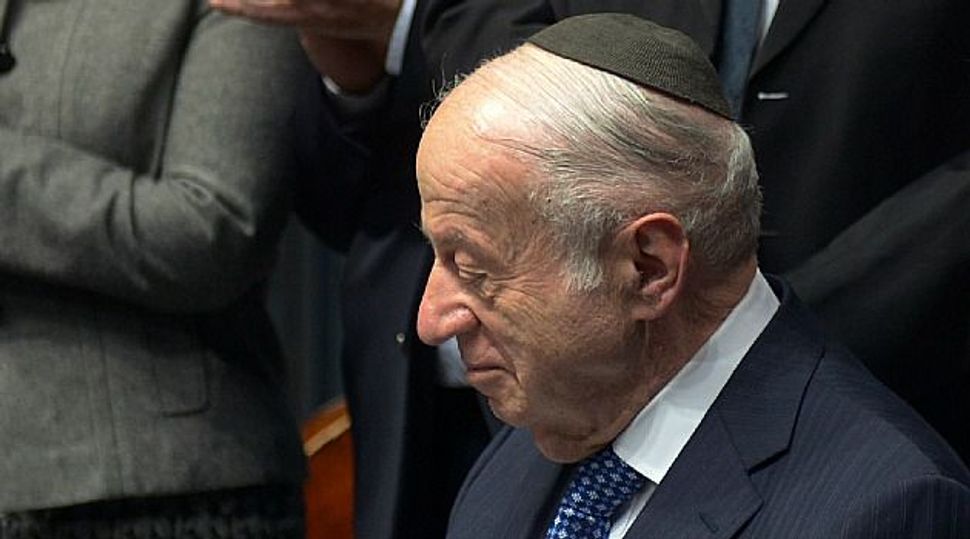 What He Knew: Julius Berman is up for reelection as chairman of the board of the Claims Conference. Some are demanding he release a report on a massive fraud before its annual meeting next week. Image by getty images

A leader of Germany’s Jewish community has called for the urgent release of a report into the handling of a $57 million fraud at the group that oversees restitution payments to Holocaust survivors.

Stephan Kramer demanded that the Conference on Jewish Material Claims Against Germany release its ombudsman’s report on the fraud prior to the group’s annual board meeting, at which the group’s chairman, Julius Berman — who was a key player in addressing the fraud — will be up for re-election.

Kramer also urged the Conference on Jewish Material Claims Against Germany to move the organization’s handling of the fraud to the top of the agenda for its forthcoming annual meeting in New York.

“We must not create the impression that we are sweeping things under the carpet,” Kramer wrote in an email to the Claims Conference. “This would be a critical error with severe repercussions.”

Kramer, secretary general of the Central Council of Jews in Germany, said it was “inappropriate” that the issue is scheduled as the penultimate agenda item for what promises to be one of the most contentious annual meetings in Claims Conference’s recent history.

“The severity of the issue and the massive demands from leading persons and organizations in the Jewish world make it, to my mind, necessary to put the report much higher on the agenda,” Kramer wrote in his email to Ari Bucheister, the Claims Conference’s chief of staff. “The Claims Conference must make it clear to all that it assigns this topic top priority.” News of Kramer’s demands was first disclosed by the Jerusalem Post. The Claims Conference had did not immediately respond to a request for comment on the issue from the Forward.

The Claims Conference leadership has been under fire since the Forward reported in May that an anonymous letter, sent to the organization in 2001, warned of a potential fraud by a handful of Claims Conference employees. A decade later, all of those implicated in the letter were convicted of or pled guilty to their part in the fraud, which ran for about 15 years and involved about a dozen insiders and dozens more outside conspirators.

The money was defrauded from two funds financed by German taxpayers, a reality to which Kramer may be especially sensitive.

Several Claims Conference officials who were in charge at the time have since left the organization. But others, such as Greg Schneider, the group’s executive vice president, and Berman were involved in investigations into the letter, albeit in less senior positions.

Berman, who was then the Claims Conference’s general counsel and a member of its audit and executive committees, oversaw a paralegal’s investigation into the letter’s early fraud allegations that confirmed many of its details. But no follow-up appears to have been taken on the paralegal’s recommendation that the matter be probed further, either then or when Berman became chairman of the conference the following year.

The Claims Conference’s annual meeting is often a tense affair as board members debate how best to spend hundreds of millions of dollars for survivors and Holocaust education. This year’s meeting begins in New York on July 9, with the election of officers.

Kramer is one representative of more than 20 Jewish organizations from around the world that have seats on the board. His response adds to a growing number of board members who have publicly criticized the Claims Conference’s handling of the fallout from the letter.

In recent weeks, Ronald S. Lauder, president of the World Jewish Congress, sent several pointed questions about the handling of the fraud to Berman.

Natan Sharansky, chairman of the Jewish Agency for Israel, Stefanie Seltzer, president of the World Federation of Jewish Child Survivors of the Holocaust, and Samuel Norich, a representative of the Jewish Labor Committee, have called for an independent investigation into how the letter was dealt with by Claims Conference officials. (Norich is president of the Forward Association, which publishes the Forward.)

Another group, the American Gathering of Jewish Holocaust Survivors and Their Descendants, called for an independent review or, at the very least, an investigation by the Claims Conference ombudsman Shmuel Hollander.

Berman established a four-man committee in May to look into how top officials, including him, handled the letter. That committee commissioned a report by the ombudsman Hollander, which has been completed but has not been passed on to board members.

“I would like to formally ask you to move discussion of the Ombudsman’s Report to the first day as the first substantive business item, following the formal election of Claims Conference board members,” Kramer wrote in his email.

“After all, we are discussing the most severe issue the organization is facing. We should not get into any other business, before we have discussed and concluded on this matter.” Kramer added: “This is also a question of trust in the leadership of the Claims Conference – trust by the Jewish world and beyond it.”

The Forward, along with the New York Jewish Week, has requested permission to attend and report on the annual meeting. The request was denied.

Berman added: “There are often very frank, prolonged discussions where differences of opinion are exchanged and there may be members of the board who would not want to speak in such a manner if they knew that the meetings were open to the public and the media.”