Putin Warns U.S. That Strike on Syria Could Escalate Problems in the Region 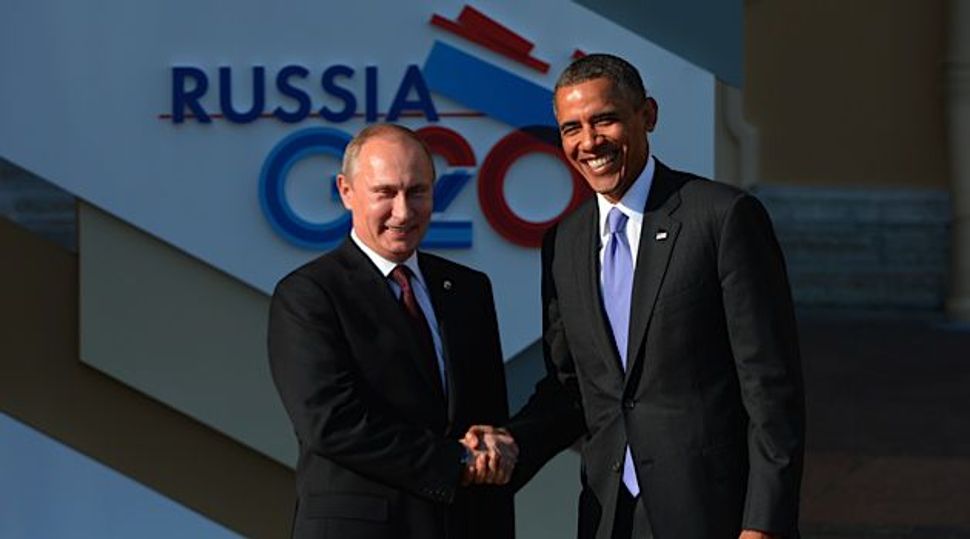 Russian President Vladimir Putin warned on Wednesday against a U.S. strike on Syria, saying such action risked escalating the conflict beyond that country and unleashing terrorist attacks.

Writing in the New York Times, Putin said there were “few champions of democracy” in the 2-1/2-year-old civil war in Syria, “but there are more than enough Qaeda fighters and extremists of all types battling the government.”

He repeated assertions by his government and Damascus that an August chemical weapons attack that the United States blames on President Bashar al-Assad’s government was likely the work of opposition forces seeking to provoke foreign intervention.

President Barack Obama wants to hold Assad accountable for the suspected attack in a Damascus neighborhood on Aug. 21 that U.S. officials say killed about 1,400 people, including 400 children.

Obama said in a speech on Tuesday that he had asked Congress to put off a vote on his request to authorize military action in Syria to let diplomacy play out around a Russian proposal to put Syrian chemical weapons under international control, although he said the threat was still needed to ensure Syria complies.

Putin cautioned against taking military action without U.N. Security Council authorization, saying, “We must stop using the language of force.”

“The potential strike by the United States against Syria, despite strong opposition from many countries and major political and religious leaders, including the pope, will result in more innocent victims and escalation, potentially spreading the conflict far beyond Syria’s borders,” Putin wrote.

“A strike would increase violence and unleash a new wave of terrorism,” he added. “It could undermine multilateral efforts to resolve the Iranian nuclear problem and the Israeli-Palestinian conflict and further destabilize the Middle East and North Africa. It could throw the entire system of international law and order out of balance.”

Putin said it was alarming that intervening militarily in foreign countries’ internal conflicts had become “commonplace” for the United States.

“Is it in America’s long-term interest? I doubt it. Millions around the world increasingly see America not as a model of democracy, but as relying solely on brute force, cobbling coalitions together under the slogan ‘you’re either with us or against us.’”

Putin also rejected Obama’s assertions of “American exceptionalism,” saying: “It is extremely dangerous to encourage people to see themselves as exceptional.”

Russia has been Assad’s most powerful backer during the civil war, which has killed more than 100,000 people since 2011, delivering arms and – with China – blocking three U.N. resolutions meant to pressure Assad.

On Tuesday, Syria accepted the Russian proposal to surrender its chemical weapons to international control to try to win a possible reprieve from a U.S. military strike.

U.S. Secretary of State John Kerry and Russian Foreign Minister Sergei Lavrov spoke by phone on Wednesday, the State Department said, one day before they are due to meet in Geneva to try to agree on a strategy to eliminate Syria’s chemical weapons arsenal.

Saying his “working and personal relationship with President Obama is marked by growing trust,” the Russian leader said, “I welcome the president’s interest in continuing the dialogue with Russia on Syria.

“We must work together to keep this hope alive, as we agreed to at the Group of 8 meeting in Lough Erne in Northern Ireland in June, and steer the discussion back toward negotiations.”

Putin Warns U.S. That Strike on Syria Could Escalate Problems in the Region