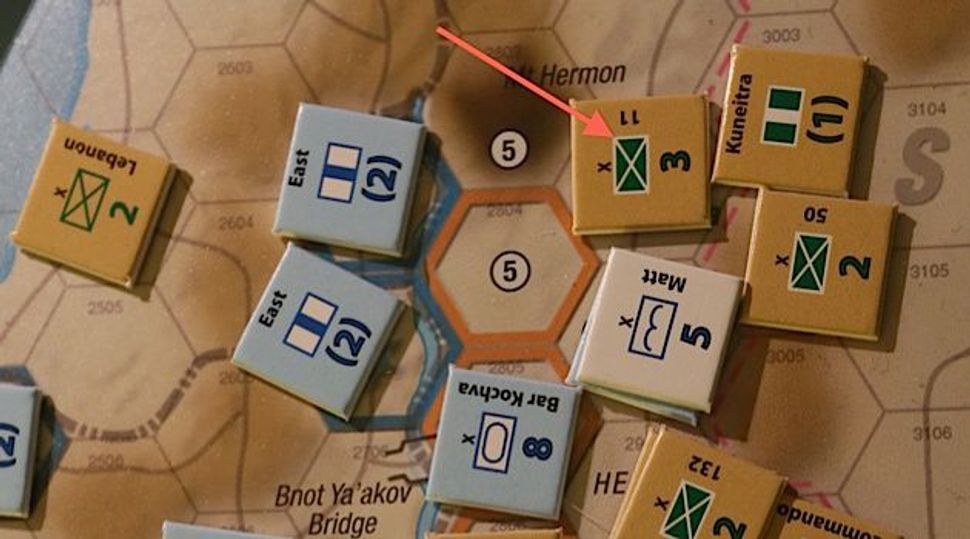 Six Day War Game: A photograph of the board game ?Six Day War: 1967? depicts the Israeli and Syrian forces in the Golan Heights. Image by courtesy of boardgamegeek.com

It is October 1973, and the state of Israel is in mortal danger. To the north, Syrian tank columns have overwhelmed the handful of Israeli defenders on the Golan Heights. To the south, Egyptian troops have crossed the Suez Canal and are advancing through Sinai.

You command the Israeli forces desperately mobilizing to meet the Arab onslaught. Will you concentrate your troops against the Syrians or the Egyptians? Will you order them to counterattack aggressively, or time your counterstroke until after the Arabs have battered themselves against your defenses?

What are you going to do?

It is easy to critique the mistakes made by the Israelis in the near-defeat of 1973, or Napoleon at Waterloo, or Robert E. Lee at Gettysburg. It is even easier to assure yourself that you would have done better than them if only you had been in command.

Here is your chance to find out.

We don’t have time machines to take us back to Waterloo or Sinai. But we have war games, a sort of paper time machine that puts you into the shoes of the historical commanders. More complicated cousins of chess and Risk, war games are board games typically consisting of maps ranging in size from a kitchen table to an entire basement, hundreds or thousands of dime-size cardboard chits that represent military units, dice to resolve combat and rules that can range from two pages to nearly 100.

(War games are also played online, but most of the real war titles are board games because online developers typically focus on “shooter” themes rather than complex historical topics.)

Thousands of wargame titles have been published over the last 50 years on every conceivable conflict, from the wars of ancient Greece to the Napoleonic Wars and World War II, to science fiction universes like Star Trek.

War games tend to appeal to those who like to understand history by getting their hands on it, by exploring and experimenting with what happened and what might have happened. “Books are narrative history, the sort of chronology they teach in social studies class,” said Mark Herman, a wargamer who has made a career out of designing war games for both the Pentagon and civilian gamers. “War games are a form of analytic history, showing what is possible. A good military history game is not just what is known, but also shows the paths not taken.”

Then there is also the pleasure of learning. The geography of rivers and mountains, cities and islands, becomes much more vivid when you must study a map to decide the best route for an army to traverse endless steppes or for a fleet to cross the vast Pacific between Pearl Harbor and Tokyo.

Not surprisingly, dozens of war games on the Arab-Israeli conflict have been published since war games first became popular in America in the 1970s. In fact, the history of modern Israel can be captured in wargaming, a fact as tragic as it is fascinating.

Playing a historical game offers insight into matters such as how Israel’s narrow geography has led its leaders to be fixated on maintaining defensible borders, or why the Arab armies could not translate their numerical superiority into victory.

We can start our tour of Arab-Israeli war games with “Israeli Independence,” a simple game depicting the 1948 Arab-Israeli War. Designed by attorney Darin Leviloff to teach modern Jewish history to his Hebrew school class at Peninsula Temple Beth El in San Mateo, Calif., “Israeli Independence” is a solitaire game in which the human player assumes the role of the Israeli commander, while the five Arab army tokens (Egypt, Jordan, Syria, Lebanon and Iraq) are controlled by a deck of cards that randomly move them on the game map towards their objective of Jerusalem.

Each card also specifies a certain number of Israeli counteroffensives that push back Arab armies further from Jerusalem; the challenge for the Israelis is they can only push back one or two armies at a time, leaving the remainder to continue their advance. Thus the Israeli defense is like a fire brigade racing from blaze to blaze.

The cards also contain brief historical commentary; for instance, a Deir Yassin card penalizes the Israelis and helps the Arabs. “One of the difficult issues of designing the game was how to approach the Palestinian Arab issues,” said Leviloff, who describes himself as a Zionist. “I didn’t want to sugarcoat the historicity of the struggle.”

“Operation Kadesh” depicts the 1956 war, during which Israel captured the Sinai Peninsula, only to hand it back to Egypt under American pressure. But to depict the 1967 war, prolific game designer Joe Miranda, who has created more than 250 war games, faced a problem: The Israeli victory was so crushing that no game would be fun for an Arab player. So, Miranda came up with a clever solution: have two Israeli players compete against each other.

In “Six Day War: 1967,” one player controls the Israeli forces facing Egypt in the south — and the Arab armies on the Syrian and Jordanian fronts in the north and east. The other player controls the Israeli forces on the Syrian and Jordanian fronts — and the Egyptian troops in the Sinai. Thus each player must orchestrate an Israeli offensive on his own front, while controlling the Arab forces that will try to thwart his opponent. Whichever of the Israeli players does best on his own front wins the game.

The dramatic 1973 war, during which Israel transformed initial defeat into battlefield success, has spawned several games, such as “Heights of Courage” and “Yom Kippur,” which simulate the Golan and Sinai fronts respectively. Perhaps the best games are the 1974 and 1977 editions of “Bar Lev,” (named after Israel’s fortified Bar Lev Line along the Suez Canal) a few copies of which are available on eBay.

The Israeli player, outnumbered on both the Sinai and Golan fronts, must carefully choose which front to deploy his troops to as they mobilize, which involves weakening one front to strengthen another.

“Lebanon ’82,” simulates the 1982 Lebanon war and even has a scenario for the 2006 conflict with Hezbollah to show

the evolution of Israel’s relationship with the Palestine Liberation Organization. “A Reign of Missiles” is a solitaire game where the Israeli player gets points for intercepting Hamas rockets during the November 2012 conflict, while trying to avoid escalation into a full-scale ground invasion.

Perhaps the most intriguing game is one about a war that has not (yet) happened. “Persian Incursion” is a complex simulation of a hypothetical Israeli air campaign to destroy Iranian nuclear facilities. Co-designed by techno-thriller writer Larry Bond, the game comes with reams of background material on Iranian nuclear sites and their defenses. “The most obvious challenge was getting reliable information on the Israeli and Iranian orders of battle and their capabilities,” said Bond. “Israel’s special challenge was their secrecy. What had they done that they weren’t sharing with us? Iran’s was understanding and modeling their difficulties operating a military with ‘legacy’ equipment.”

In “Persian Incursion,” the Israeli player must allocate his limited number of strike aircraft among various nuclear targets in Iran. But first his aircraft must get to Iran; the Israelis must choose an approach route that violates the airspace of Saudi Arabia, Iraq or Turkey, each of which has political consequence for whether the international community will aid Israel or Iran. For its part, Iran can’t hope to stop the Israeli air offensive, but it can hope to score a propaganda coup by downing a few F-15s and F-16s, while it retaliates by lobbing ballistic missiles at Tel Aviv.

For Jewish players, wargaming can touch on historical sensitivities — not typically because of the Arab-Israeli conflict, but because of the Holocaust. World War II is by far the most popular topic for war games, and especially the battles fought by Nazi Germany, with hundreds of games on the Eastern front alone. This doesn’t necessarily reflect enthusiasm for Nazism, but rather popular culture’s enduring fascination with the epic battles and legendary weapons of the Third Reich. Yet this also means that a Jewish wargamer is very likely to play a game in which one side is the Nazis.

“I have grappled with that issue,” Leviloff said. “When you are simulating, say, the struggle between Germany and Russia, you have in the back of your head, what it would mean if the Germans win? As a Jew, you have a good sense of what that would mean.”

Herman said, “I won’t play as the Germans. I like beating the Germans, but I don’t like playing as the Germans.” Yet even though one side must play the Nazi, that doesn’t diminish the appeal of sophisticated historical games in Herman’s eyes. “They are history lessons,” he said.

Michael Peck is Games Editor at Foreign Policy Magazine and writes the War Games blog at Forbes.com. Find him on Twitter @Mipeck1