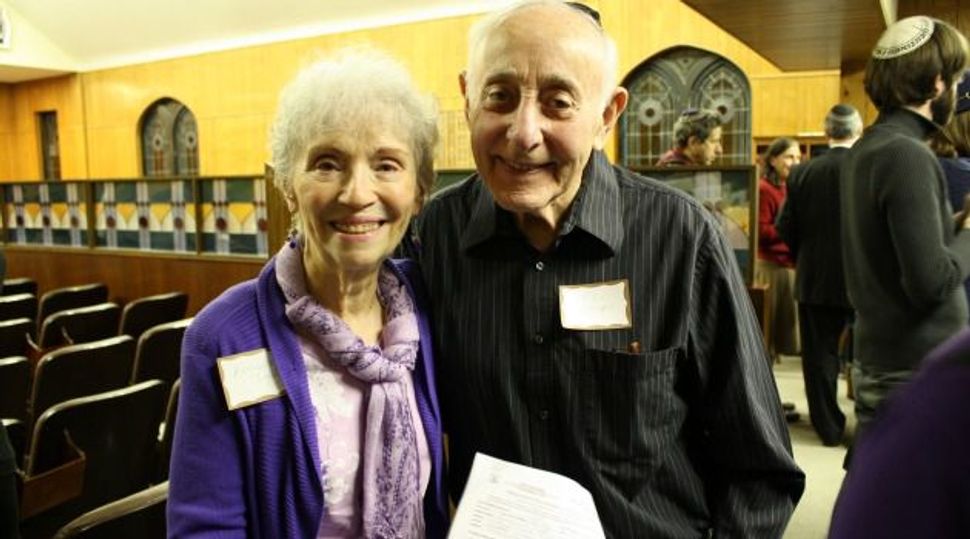 Grandpa?s Got a Postnup: Kenneth and Annabelle Chapel, the author?s grandparents, will celebrate their 60th anniversary this summer. Image by Hody Nemes

Bobby and Chelle Medow are happily married — and have been for almost 50 years. Yet one Sunday evening in January, the St. Louis couple made contingency plans for a divorce. And 31 other Orthodox married couples joined them.

They are part of a small but budding movement that is being promoted by some Orthodox rabbis around the country as a way to expand protection for Jewish women. But like its precursor, the prenuptial agreement, the postnuptial agreement now spreading within Orthodoxy’s liberal wings has yet to catch on more broadly as a way to prevent the phenomenon of agunot, or chained women, in the world of the traditionally observant.

Like a prenuptial agreement, postnups are designed to help solve the issue of men who refuse to grant their wives a religious divorce during or after a civil divorce settlement. Without such a written agreement from her husband, known as a get, a religiously observant woman may not remarry.

Under a system first proposed to address this inequity in the early 1990s by Modern Orthodoxy’s largest clerical association, prospective marriage partners can sign a prenuptial agreement that requires each partner to grant his or her spouse a get upon civil divorce or face steep fines enforceable in civil courts. But even as some Orthodox rabbis embraced the concept, requiring the couples they wed to sign these forms, the Rabbinical Council of America, which first proposed this idea, has itself never made using prenups a requirement for its member rabbis.

Among Orthodox rabbis who did embrace prenuptial contracts, another issue remained: Many Orthodox couples were wed long before the prenup appeared on the scene, or were married by a rabbi who did not require it. These women, though already married, were no less subject to peril in the event of a divorce.

“This isn’t something you just get grandfathered into,” said Rori Picker-Neiss, a fourth-year student at Yeshivat Maharat, a liberal Orthodox yeshiva for women. Picker-Neiss, who works for Bais Abraham Congregation, the venue for the St. Louis event, summed up the problem succinctly: “If we changed the policy and every Orthodox rabbi tomorrow started to only do weddings with a prenup, then we could maybe solve this problem in 50 to 60 years.”

As with prenuptial agreements, the postnuptial contracts require couples to appear before a predetermined beit din or rabbinic court for religious divorce arbitration when a civil divorce takes place. If the man subsequently refuses to grant his wife a get, the beit din will require him to pay his wife $150 per day until he relents — a fine enforceable in civil court.

Among congregations that support this idea, postnup parties and signing ceremonies are increasingly popular as a means of encouraging already married couples to sign the agreement.

Organizers often frame the events as a way to celebrate happy marriages. “We thought it was great way to reaffirm our vows,” said Rabbi Ira Ebbin of Congregation Ohav Sholom in Merrick, N.Y., which held a postnup party this past July that drew over 50 couples. “We took an opportunity to pledge to our spouses that we’d never intentionally harm them in any way.”

The party featured a festive dinner and Jewish wedding dancing. “We made it look like you would have been arriving at a wedding,” said Edie Stein, who organized the event.

The wedding theme alleviates some of the awkwardness of signing divorce-related documents while still married — a necessary sweetener, given that many couples are initially reluctant to attend.

The Medows were no exception. “When I first mentioned it to Bobby, he was taken aback and he said, ‘I have to investigate this and see what I’m doing,’” Chelle Medow recounted. “But once he did that, it was clear [to him] that the entire Jewish community needs this.”

“When it’s a postnup party, you might think, ‘Is there any point after 28 years of marriage?’” said Carolyn Hochstadter Dicker of Lower Merion, Pa., who attended a postnup party at a friend’s home last fall. “It just seems a little bit odd and contrived, but we went.”

“We were all sitting there kind of happy, but feeling a little sheepish as well,” she said.

Ebbin and Stein, the Merrick, N.Y., congregational leaders, faced an uphill battle convincing many of Ohav Sholom’s congregants to participate. “When [the postnup event] was first mentioned, the men especially were all chuckling on their side of the shul,” Stein said. Many saw the signing as pointless or uncomfortable, since they had been in stable marriages for years.

“It was actually challenging and a little frustrating — people weren’t coming out [and] weren’t registering” for the signing, Ebbins said. “People feel weird about it — discussing divorce. A number of people have said to me, ‘This is not relevant to me because we’re not getting divorced.’”

Despite such inevitable qualms, the postnup party phenomenon has come into its own over the past two years, with events held in Washington, D.C., Pennsylvania, Connecticut, Rhode Island and throughout the New York metropolitan area. Several more parties will be held over the next two months.

The documents are also gaining traction among left-leaning Orthodox rabbinical groups. Last year, the International Rabbinic Fellowship voted to require member rabbis to sign postnups with their own wives if they had not already signed a prenup. And in 2012, the IRF passed a resolution obligating its rabbis to use prenups in all weddings at which they officiate, or face expulsion from the group.

The failure of the much larger Rabbinical Council of America — which helped draft the prenup in the early 1990s — to do the same has provoked disappointment among some in Orthodoxy’s liberal wing.

“It just makes me really, really sad that they have this document — it’s their document — and they haven’t stood behind it and said in unequivocal terms that every rabbi is required to” use it, Picker-Neiss said. “I just can’t fathom why they’re not getting behind it.”

Rabbi Shmuel Goldin, the RCA’s honorary president, said he believes the “vast majority” of RCA rabbis support the prenup, but the organization does not want to expel the document’s opponents. “It’s much easier for a group like the IRF, that is a much smaller and monolithic group to boast, ‘We require it,’” he said. “If the RCA was a much smaller group of people who thought in lockstep with each other, it would be easy for us to do that as well.”

Still, many opponents of the document believe that adding new legal conditions to a marriage ceremony is contrary to Jewish law, according to Goldin. Others are uncomfortable with introducing thoughts of divorce to a couple during a joyful wedding.

RCA Executive Director Mark Dratch said his organization strongly encourages the prenup’s use and is “working towards 100% compliance,” but obstacles remain. “There are some concerns that have been voiced by our rabbinic advisors with regard to making it absolutely required, so as a result it’s not a requirement of membership,” he said, but declined to elaborate on the advisors’ specific concerns.

The RCA has focused its efforts on promoting the prenup, not the postnup, though some RCA rabbis have organized postnup events for their congregations. “More and more rabbis are talking about doing it within their communities,” Goldin said. “It’s something that should be encouraged and that I assume we will encourage.”

Ultra-Orthodox groups by and large reject both prenups and postnups as impermissible innovations.

“I think there is lots of hesitancy out there,” said Hyim Shafner, rabbi of Bais Abraham and an IRF board member. “[It]seems like even in the centrist [Orthodox] world there’s a lot of wariness about doing these public signings.”

“People have said to us, ‘What is this crazy liberal thing that Bais Abe is up to now?’” Picker-Neiss said.

Despite their differing policies, the RCA and IRF’s focus on prenups is partly responsible for the recent spate of postnup parties, according to Rabbi Jeremy Stern, executive director of the Organization for the Resolution of Agunot. Stern also believes the increase is due to several high-profile agunah cases, including those of Gital Dodelson and Tamar Epstein.

Dodelson, who has waited three years for a get, entered the public eye when her story was featured on the front page of the New York Post in November. Epstein’s husband refused to grant a get at the time of their civil divorce in 2010. The Silver Spring, Md. couple’s standoff, which received wide attention, resolved in December.

Agunot also made headlines in October 2013, when the FBI arrested several men accused of abducting and violently forcing recalcitrant husbands to grant gets, using karate and cattle prods. Wives allegedly hired these hit men for tens of thousands of dollars.

“Until you actually experience it and see the pain, it’s all theoretical,” Shafner said. “But I’ve had women who have wait two, three, four years for a get. Sometimes they have to give in on things like custody or money — and that’s terrible.”