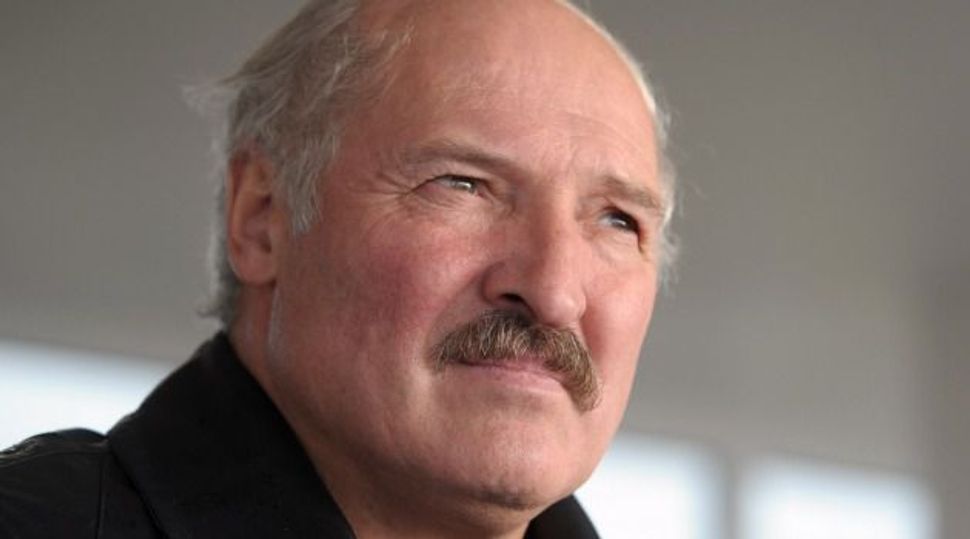 Strongman: Alexander Lukashenko, the authoritarian leader of Belarus, got a boost when the Israeli ambassador compared political prisoners in the former Soviet republic to jailed terrorists. Image by getty images

Israel’s foreign ministry disavowed statements by its ambassador in Minsk, who compared Palestinian terrorists to political prisoners in Belarus.

The statement by Israel’s Ministry of Foreign Affairs was published in Polish last week and concerned remarks that Ambassador Yosef Shagal made during an interview aired on Feb. 6 by the Russian RTVi television station, in which he also accused Poland of hypocrisy on Belarus.

“A Palestinian who throws rocks at the Knesset, what would he be, a political prisoner or criminal?” Shagal said. “According to the penal code, he’s a criminal. But from Poland’s perspective, and that of the European Union, they are all political prisoners,” he said.

Shagal added: “The country that initiated all the pressure on Belarus is Poland. On the one hand they [Poland’s government] complain about human rights and dictatorship [in Belarus], on the other hand, there’s $5 million,” he added, in reference to the level of trade between Poland and Belarus.

Belarus is facing international scrutiny and sanctions over human rights violations by its president, Alexander Lukashenko, who has referred to himself as Europe’s last dictator.

Last week, the spokesperson of Israel’s foreign ministry, Yigal Palmor, issued a statement that was published on the website of Israel’s embassy in Warsaw, which said that “the words of the ambassador in Minsk in no way reflect the position of the State of Israel. His words “caused a misunderstanding among our friends. We express our regret over this,” the statement also read.

Contacted by JTA, Palmor declined to offer an English translation but confirmed the content of the statement.

On Tuesday, several former political prisoners from Belarus published a letter on the website charter97.org.

“We do not intend to interfere in the personnel policy of the Israeli Ministry of Foreign Affairs but believe that it is obvious that democratic community of Belarus find Mr. Shagal’s statements deeply offensive,” and are “unlikely to be conducive to maintaining a positive image of the state of Israel in Belarusian society,” they wrote.