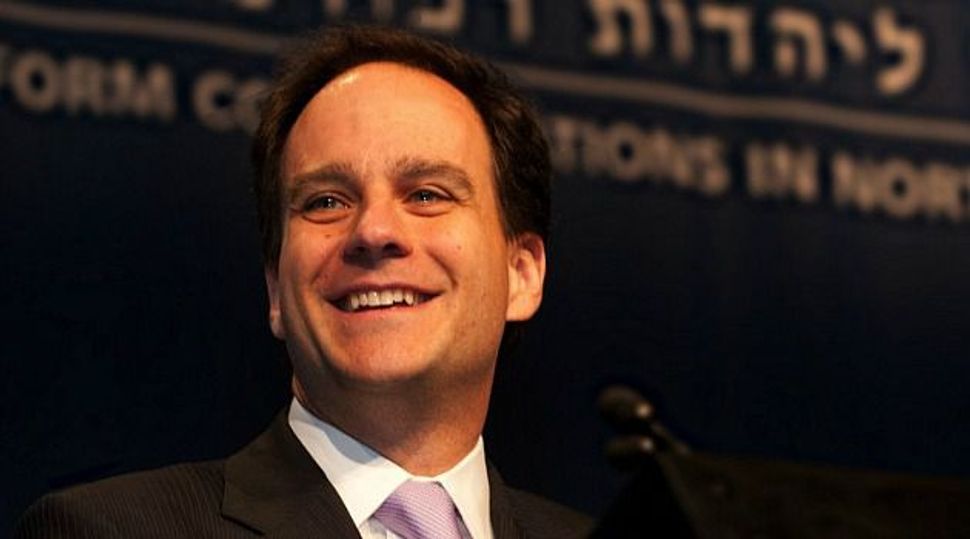 (JTA) — With a liberal agenda, the Reform movement’s Religious Action Center has not had an easy time of it in an increasingly polarized Washington.

But Rabbi Jonah Pesner, the center’s incoming leader, may have an even tougher row to hoe as conservative Republicans tightened their grip on Congress.

Just two years ago, Pesner briefly considered running as a Democrat for the U.S. Senate seat in Massachusetts vacated by John Kerry after he was named secretary of state. And the legislative priorities he has already identified — climate change, economic inequality and racial justice — are unlikely to win him many supporters on the Republican side of the aisle.

“As I look at the tragedies in Ferguson and Staten Island, I fear that they are emblematic of what is happening in too many communities nationwide,” Pesner said in a news release announcing his appointment, which became official on Thursday. “Among our top priorities to address the racial disparity all too present in our society will be pushing for action in the new Congress to protect voting rights and to end racial profiling.”

Pesner, 46, succeeds Rabbi David Saperstein, who has led the RAC since 1974 and was known for his easy access to the Obama administration. Saperstein was confirmed last month as the State Department’s envoy for religious freedom.

Founded in 1961 amid the turmoil of the civil rights era, the RAC for decades has been the storied entree into the corridors of Washington power for Jewish social justice advocacy. First-time visitors to its 19th century building in downtown Washington are inevitably ushered into its conference room where, in hushed tones, staffers will note that the 1964 Civil Rights Act and the 1965 Voting Rights Act were drafted there — with help from luminaries like the Rev. Martin Luther King Jr.

“I have known and loved the RAC for 30 years,” Pesner told JTA in an interview. “The leadership in my movement was shaped by the RAC, and I’m in a position to lead the next chapter. It feels very bashert.”

Saperstein’s close identification with Democrats — he delivered the blessing at Obama’s 2008 nomination in Denver — has earned him GOP suspicion at times, but he was adept at building good will across the aisle, for instance by advocating fiercely for Christian communities in peril overseas. More recently he was a key figure in helping the White House overcome resistance among religious groups to Obama’s heath care initiative, helping to shape regulations that allow the groups to delegate birth control coverage to third parties.

“Most Jews and most Reform Jews are comparatively liberal,” Saperstein said in an interview with JTA. “What [Pesner is] good at is recognizing that conservatives can be as devoted to social justice as liberals are. He brings a lot of skills to build consensus where it can be done and to defuse incivility where its not possible.”

Pesner is also close to Democrats in Massachusetts, where he has lived since the 1990s. Gov. Deval Patrick took time off from his last day as governor to shoot an email to JTA describing Pesner as “a passionate advocate for social justice, and a friend.” And Rep. Joe Kennedy (D-Mass.), also in an email, described Pesner as a “compelling, compassionate, man of faith and integrity.”

“Throughout his life,” Kennedy wrote, “he has been a well-respected advocate for human rights, marriage equality, and social justice and I’m honored to call him a friend.”

Pesner told JTA that the same experience that led him to once consider a political career — helping to shepherd health care reforms in Massachusetts during Republican Mitt Romney’s governorship — made him a good candidate for lobbying both sides of the aisle.

“I bring to Washington the perspective of politics that transcends political parties,” Pesner said. “It was a vision of a higher plane of politics to engage people across the aisle.”

Raised in New York, Pesner served as a congregational rabbi in Boston. In 2006, he created Just Congregations, an arm of the Union for Reform Judaism that trains local congregations to join with other faith groups in advocating for social justice issues.

Pesner, who has served as a URJ vice president since 2011, said he sees Reform synagogues as natural locations for regional activism based on the Just Congregations model.

“The RAC will be a partner in the transformation of synagogues to be more impactful in local communities and to engage people in Jewish life,” he said.