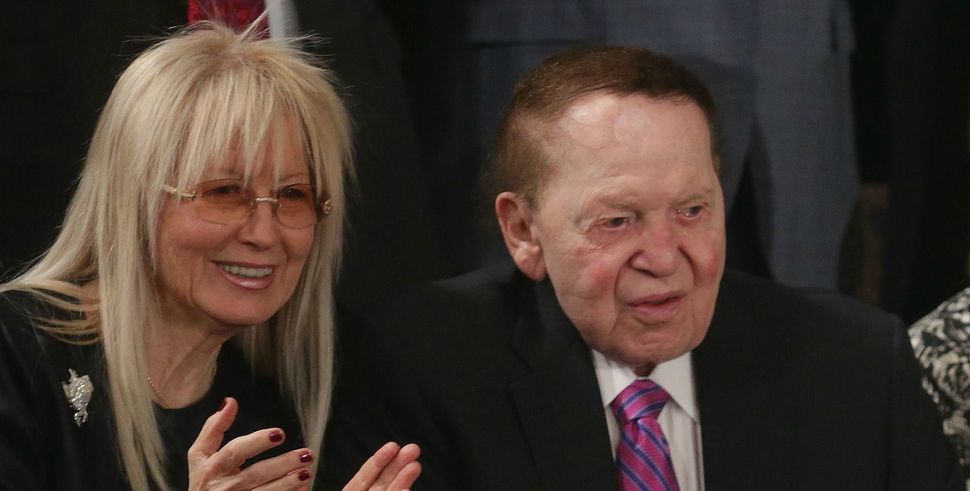 Through the power of their funding, Las Vegas billionaire Sheldon Adelson and several associates are seeking to transform the fight on campus against groups advocating boycott and sanctions against Israel — and, in the process, shift the center of gravity of those engaged in this battle significantly to the right.

The effort, which is being kicked off at a weekend gathering at Adelson’s Las Vegas Venetian hotel and casino, will offer a selected group of invited organizations a chance to present their work to a panel of mega-donors in a bid for funding.

The list of invitees and panel members, obtained by the Forward, reveals a roster of speakers and presenters representing a narrow political spectrum, ranging from several mainstream or nonideological organizations, such as Taglit-Birthright Israel and the Jewish fraternity Alpha Epsilon Pi, to a majority of organizations aligned with right-wing and hawkish political views. Among the participants are Christians United for Israel, the Zionist Organization of America, the right-wing website Washington Free Beacon and the Clarion Project, which has been accused by mainstream Jewish groups of Islamophobia. Officials from the Committee for Accuracy in Middle East Reporting in America, StandWithUs, EMET and the Middle East Forum — all groups that hew to the right on the political spectrum — will also make presentations.

The list also contains some of the organized Jewish world’s major players, including Hillel, the Anti-Defamation League and the Jewish Federations of North America. But no organization heads represent any of these groups.

Some of the largest on-campus organizations were invited but are not attending. The Israel on Campus Coalition, a group established with the sole mission of countering anti-Israel activism on campus, decided to sit out, as did the Israel Action Network, a joint program of JFNA and the Jewish Council for Public Affairs that was set up to address BDS. Both organizations declined to comment on their reasons for not participating.

Others, most notably liberal organizations, such as J Street, Ameinu and the New Israel Fund, weren’t invited. All oppose the campaign to boycott, divest from and sanction Israel, or BDS, as the movement is known.

At the center of the organizing effort, with Adelson’s support, is Rabbi Shmuley Boteach, who will act as the new initiative’s point man.

The organizational makeup and the way in which the conference was developed are making some in the Jewish community feel uneasy. The structure, as they see it, is an inverted pyramid model. Rather than organizational professionals in the field developing programs for which they seek funding, in this case donors are summoning organizations to pitch their ideas, from which the wealthy donors will choose.

The program makes no bones about the primacy of the funders in this initiative over the groups they have summoned. Participants were asked to prepare a 10-minute TED-style presentation to donors. A five-hour “Mega Philanthropists Session,” scheduled at the very end of the conference, on Saturday, June 6, will then “develop the conceptual framework for the anti-BDS action plan, assign roles and responsibilities to pro-Israel organizations, and create an appropriate command-and-control system to implement it,” the program announces. Those attending this session must make a prior commitment for an “average donation of $1M over the next two years.”

While some of the largest on-campus organizations have chosen to skip the Adelson-Boteach confab altogether, others sent lower-level representatives. Several have expressed their displeasure behind closed doors.

“Different groups made decisions based, in part, on whether having the Adelson imprint will hurt their efforts to work against BDS on campus,” said a senior Jewish communal official who, like most other activists commenting on the issue, would not be identified, due to organizational ties with the donors attending the Vegas meeting.

In an interview with the Forward, Boteach stressed: “No one is saying there’s only one way. What this group of philanthropists is saying is: ‘How can we help you? How can we help better fund you?’”

Boteach and Adelson have been discussing the idea of launching the campus initiative for months, but invitations to attend the meeting landed in the inboxes of Jewish groups’ leaders only 10 days before the event. The meeting was titled “Campus Maccabees Summit,” a name chosen by Boteach and Miriam Adelson, Sheldon Adelson’s wife, but unfamiliar to most Jewish activists. “All proceedings,” participants were told, “shall remain strictly confidential.” The email informed invitees that they must agree “not to discuss the events of the conference with media before, during and after the Campus Maccabees Summit.”

Representatives of 50 organizations have confirmed their participation, as have 20 donors. “The goal,” participants were told, “is to raise substantial funds to fight BDS.”

Adelson, the billionaire casino mogul whose political donations have made him a Republican kingmaker, serves as more than the host of the June 5–6 gathering. Alongside his wife, he is the chief organizer and visionary behind the idea of getting Jewish money to boost an anti-BDS drive on campus.

“It was Sheldon’s idea from the outset,” said Boteach, who, at Adelson’s request, prepared a document detailing what he sees as the nature of the problem and the ways the Jewish community is currently dealing with it.

Two donors with Israeli ties have also played a major part in organizing the summit: Hollywood entertainment businessman Haim Saban, known for his close ties to the Clintons and for his hawkish views on Israel, and Adam Milstein, a California real estate developer who has focused his philanthropy on advancing the Israeli-American community and on supporting Israel on campus.

According to Boteach, Adelson’s idea was to examine the practices employed by pro-Israel organizations on campus and to provide extra funding for those deemed effective by donors. Boteach’s role in this initiative is central, though not yet fully defined. “The idea is to find and create campus Maccabees,” Boteach said, a term he used frequently but did not explain. “What role will I play? That’s not for me to determine.”

Boteach stressed that the enterprise will focus on collaboration and on making sure pro-Israel groups on campus work in coordination.

The perceived vagueness of the language has left some players feeling on edge. They were uncertain whether Adelson’s Maccabees is yet another campus operation, or a body designed to control the funding and serve, in fact, as an umbrella organization, subsuming at least two umbrella groups formed by the Jewish community for similar purposes.

Meanwhile, the list of those not attending the conference has raised eyebrows in the Jewish community. Another notable no-show, besides the two major anti-BDS groups, is the American Israel Public Affairs Committee, which has established a significant presence on college campuses and has engaged student leaders across the country. “We do not have a representative at the meeting, but we appreciate their efforts in addressing this challenge on campus,” an AIPAC source said. The lobby has had a tense relationship with Adelson, a former supporter who withdrew after AIPAC formally endorsed the goal of resolving Israel’s occupation of Palestinian territories through establishing a Palestinian state alongside Israel — a goal embraced by the United States and, until recently, by Israel.

“This is a start,” Boteach said when asked about the groups not attending. “Whoever comes, that’s a lot better than not doing it, and I think most major players will be present.”

Benjy Cannon, president of J Street U, the dovish Israel lobby’s campus arm, said his group was “not surprised” it was not invited. Cannon, whose group has chapters on more than 60 campuses, argued that events such as the Las Vegas conference were bound to fail, because “the best way to fight BDS is to offer a credible alternative that recognizes the need to solve the problem of the occupation.”

Other organizations are less likely to cite problems with Israel’s policy as a factor in countering BDS. But several officials from mainstream Jewish groups questioned how effective a highly partisan donor such as Adelson and an in-your-face advocate such as Boteach could be in reaching out to liberal students who make up the BDS movement’s main recruitment pool.

“The question is, do the Adelsons and the Milsteins of the world have the right approach to progressives and liberals to keep them away from BDS?” an official with a major Jewish organization asked. A senior pro-Israel communal official added: “Shmuley should stay out of our bedrooms, out of our foreign policy and away from our campuses. He misunderstands and disrupts all three.”

Boteach said Adelson’s political giving should not be seen as a problem, just as no one in the Jewish community had any qualms about Adelson’s mega-donations to Birthright or to Yad Vashem, Israel’s Holocaust museum. He also argued that his own tough stance on Iran, which included a series of advertisements attacking President Obama and his administration, should not alienate him from progressive students.

As for those participants concerned about keeping Sabbath laws while pitching for donations on a Saturday, organizers have thought of them, too. “We are hiring a Goy of Shabbat to change slides for Jewish presenters,” participants were informed by email, making sure that “everyone can comfortably be present in the room during the Shabbat.”