Calling All Newlyweds — Now You Can Make Birthright Your Honeymoon 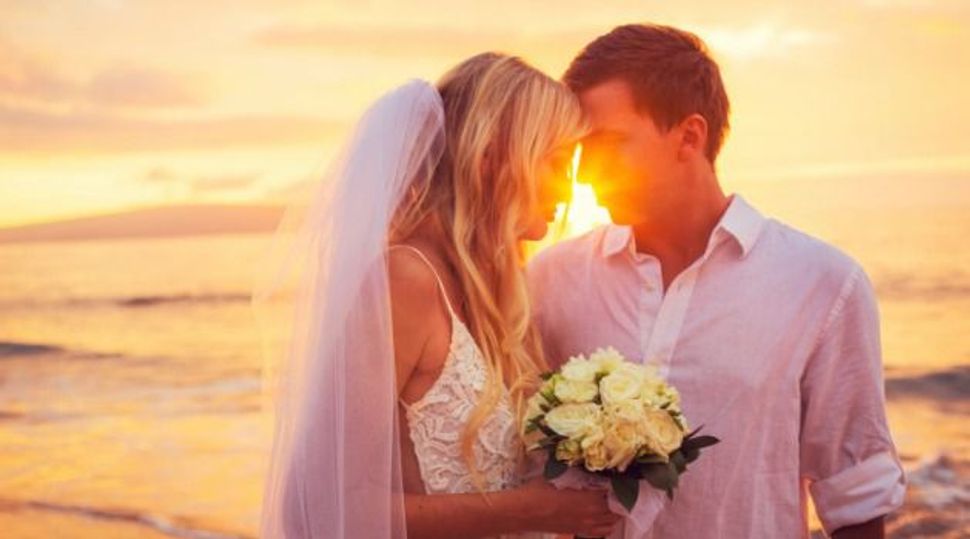 (JTA) — Jay and Mikelle sat next to each other on the bus as it ascended the road to Jerusalem.

Later the same day they accompanied each other on an emotional trip to Yad Vashem, Israel’s Holocaust museum. The next day they planned to trek up to the desert fortress at Masada and swim together in the Dead Sea.

During its week-and-a-half journey through Israel, their bus would stop so they could hike up north and relax at the beach in Tel Aviv. Some of the group had been here before; for others it was their first time.

But unlike the hundreds of Taglit-Birthright Israel buses that traverse Israel every year, there were no random hookups on this tour. Its participants were couples, some with children. About a third of the participants weren’t Jewish.

Called Honeymoon Israel, the trip is a “Birthright” for married couples aged 25 to 40. Like Birthright — the free 10-day journeys to Israel for 18- to 26-year-old Jews — the couples’ excursion hopes to foster Jewish identity in its participants as they are settling down and having kids. Acknowledging the growing number of intermarried families, the trip mandates that only one of the two partners be Jewish.

“We plan on raising our household Jewish,” said Jay Belfore, a trip participant who was raised Catholic and whose wife, Mikelle, is Jewish. “In order for me to gain a better understanding of the culture, seeing Israel is important to us.”

On their second date, Mikelle told Jay that she wanted to raise Jewish children. Jay appreciates Judaism’s emphasis on family, and said the trip has given him a frame of reference for Jewish life, teaching him about the origins of holidays and customs. The couple has two children, 3 and 1.

“My hope was that Jay would learn about Judaism on a deeper level and would feel more involved in our children’s upbringing,” Mikelle said. “Honeymoon Israel has created a safe place for couples in similar situations.”

That safe place is the trip’s goal, said Honeymoon Israel co-CEO Avi Rubel, who launched the project with co-CEO Mike Wise. Families and Jewish communities at home can be judgmental of intermarried couples or those without much Jewish background, he said, and coming to Israel together allows them to have an immersive and supportive Jewish experience.

“What if they did feel welcome and not judged, and at home in the Jewish community?” said Rubel, formerly the founding North American director of Masa Israel Journey, which coordinates long-term Israel programs for young people. “Then at this time they’re looking for meaning, and they would find it in the Jewish community.”

While the trip’s total expenses add up to about $10,000 per couple, the couples pay only $1,800. The Boston-based Jacobson Family Foundation is the primary funder. The trip is not linked to Taglit-Birthright Israel, which is paid for in part by the Israeli government.

Rubel and Wise, the former CEO of the Jewish Federation of Greater Buffalo in New York, hope to run 50 Honeymoon Israel trips a year.

Such initiatives, said Jewish sociologist Seven Cohen, are crucial in light of the results of the Pew Research Center’s 2013 “A Portrait of Jewish Americans,” which showed that 71 percent of non-Orthodox Jews were intermarrying. Showing intermarried couples a Jewish society, Cohen said, can give the non-Jewish spouse a larger context to connect personally to Judaism.

“Being Jewish in yourself is connected with being Jewish in your family, in your community and in your people,” said Cohen, a research professor at Hebrew Union College-Jewish Institute of Religion. “These circles of social identity are layered from top to bottom.”

Honeymoon Israel is one of a few imitation Birthright programs to emerge in recent years. The Jewish Women’s Renaissance Project runs eight-day group trips to Israel for Jewish mothers. An organization called Covenant Journey plans to bring groups of Evangelical Christian youth to Israel for subsidized trips starting this year.

Honeymoon Israel takes its participants across the country, but spends more time in Tel Aviv than most Birthright trips, aiming to show Israel’s modern culture as well as its historical and biblical sites. Participants on the Phoenix trip did Havdalah, the closing ceremony of Shabbat, with Beit Tefillah Israeli, a liberal prayer group that meets on the beach. And the group spent a day in northern Israel learning about coexistence efforts between Arabs and Jews.

“This is not a Disney World trip,” Rubel said. “We want people to see Israel in all its complexity. We want people to have a positive experience in Israel. We think part of doing that is giving people a chance to see the whole picture.”

The trips also aim to maintain connections among the couples after they return to their home city. Couples met at a Shabbat dinner before the trip, and monthly Shabbat dinners are planned for when they return. A trip staff member will also be available to meet with the couples back home.

“In this modern world where we have almost no boundaries, the new face of Jews is definitely an international one,” said Khai Ling Tan, who was born in Malaysia and whose husband, Jonathan Levine, is Jewish. “You don’t want to be exclusive because when you do that, your world becomes smaller and smaller and smaller.”

Calling All Newlyweds — Now You Can Make Birthright Your Honeymoon