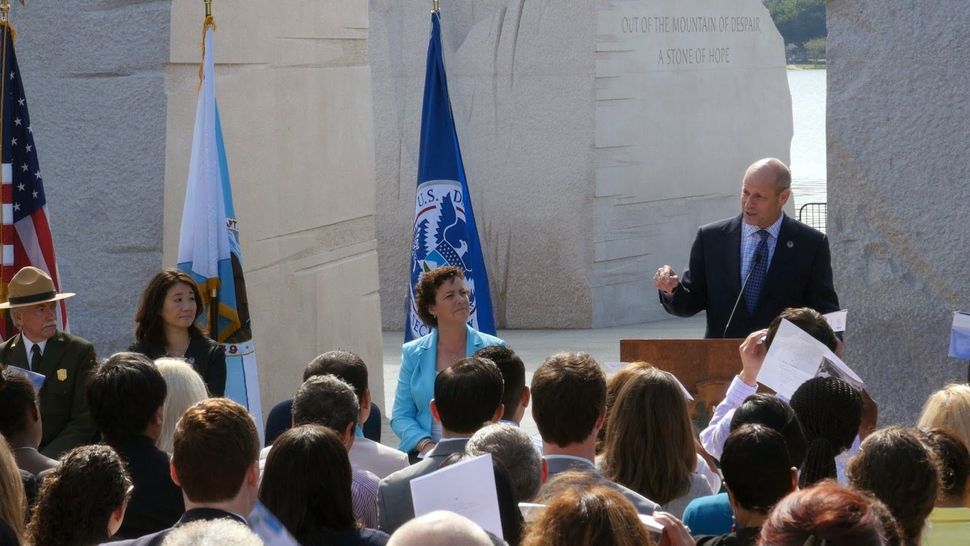 I Pledge: Bringing new Americans into the fold is an emotional task for Leon Rodriguez. Image by Official DHS photo by Barry Bahler

Leon Rodriguez spread out a collage of black-and-white family photos he keeps in his Washington office.

There was his father, surrounded by Jewish activists under a picture of Theodor Herzl in Havana; his grandparents smiling to the camera back in Turkey; his grandfather behind the sewing machine, making shoes. Next to the collage rests a thick folder, containing all the immigration files of Rodriguez family members who came to America.

These items, telling a Jewish immigration story not unlike many others, demonstrate that Rodriguez has come full circle. A son of immigrants and grandson of refugees is now in charge of America’s immigration and refugee resettlement system.

“I think about my grandparents; I think about my parents; I definitely think about the fact that nobody comes here because all they want to do is go to the beach,” said Rodriguez, director of U.S. Citizenship and Immigration Services, as he recalled the hardship his family faced before immigrating to the United States. “When I look at any case presented, I’m aware that that’s the level of desperation that family are often facing.”

Now a year into his tenure as USCIS director, Rodriguez heads a 19,000-employee bureaucracy charged with deciding who gets to start a new life in America. And with immigration reform stuck in a political deadlock, executive orders on immigration being challenged in court, and a global refugee crisis being met by a mere trickle of visas by the United States, Rodriguez faces formidable difficulties when trying to help others achieve the dream his family was able to fulfill.

“The American Jewish community owes so much to the U.S. refugee program,” said Mark Hetfield, president and CEO of HIAS, who described the path facing refugees seeking a new life in America as a “Kafkaesque nightmare.” He said Rodriguez can benefit from his own Jewish family’s history when working to resolve these problems. “It is very significant insofar that it gives him perspective on what the refugees are going through,” Hetfield said.

Rodriguez’s predecessor, Alejandro Mayorkas, who now serves as deputy secretary of Homeland Security, is a Cuban Jew, and all previous USCIS directors, since the agency was established in 2003, have been of Cuban descent.

Rodriguez views his ethnic identity as a mix. Cuban-American and American Jewish, Sephardic and Ashkenazi. But in the Cuban-American enclave in Miami Beach where he grew up, this mix came naturally.

“We owned the place,” he told the Forward in an August 11 interview at his office in USCIS headquarters next to Capitol Hill. “We were actually a majority in our little neighborhood, so I don’t think I actually ever thought of myself — as a Jew or as a Cuban — as a member of a minority until I left home to go away to college.”

His parents, who emigrated from Havana in 1961, were associated with three synagogues in Florida: an Ashkenazi English-speaking synagogue where Rodriguez attended Hebrew school, another Ashkenazi Spanish-speaking one where his parents went for parties, and a Spanish Sephardic one where the family attended services.

Rodriguez’s grandparents arrived in Cuba, like many Jews at the time, fleeing hardship and anti-Semitism in their home countries. Three of them left Turkey after the fall of the Ottoman Empire, when Kemal Ataturk’s decision to enact universal conscription drove out many Jews who feared the well-known persecution and anti-Semitism in the Turkish army. Another grandmother fled Poland, and after a short time spent in the United States she moved to Cuba.

But under the rule of Fidel Castro, life in Cuba turned difficult for the Rodriguez family. Rodriquez’s grandfather, who helped European Jews immigrate to Cuba in the 1940s and then, two decades later, assisted Cuban Jews wishing to immigrate to the United States, was jailed, as were his father and great-uncle.

The family was forced to split when moving to America. One of the family members was denied a visa to the United States, prompting Rodriguez’s grandfather to stay behind with his brother. He died shortly after and never made it to America.

This may have been Rodriguez’s first understanding of how arbitrary the U.S. immigration system, which he now heads, can sometimes be. What is lacking, believes Rodriguez, who in a previous position headed the civil rights office in the Department of Health and Human Services, is a sense of justice.

The Obama administration has all but abandoned attempts to reform America’s immigration system, giving a pathway to citizenship to more than 11 million undocumented immigrants living in the United States, due to political opposition mounted by Republicans in Congress. A less ambitious attempt to bypass Congress and provide limited relief from deportation has been put on hold until the courts rule on challenges to the legality of using executive action on this issue.

In the meantime, Republican front-runner Donald Trump has built much of his political platform on an anti-immigration policy and on a call to build a wall that would stop immigrants from entering America.

Rodriguez, whose agency is prepared to deal with millions of undocumented immigrants once the green light is given, believes that despite the tough political rhetoric, reform is bound to happen.

“I tell them,” he said when asked about his message to the millions of undocumented, “that that is just part of the road and that it is inevitable that we get to immigration reform that is needed for this country.”

His other task, managing America’s refugee resettlement program, is even more complicated. The number of refugees worldwide has reached an all-time high, estimated at 60 million with the Syrian crisis now adding millions to the list. The United States has declined to increase its quota of refugees allowed to enter beyond the level of 70,000 a year, and even within this quota it is difficult to resettle Syrian refugees, because of excruciatingly long processing times reaching an average of 18 months.

The process is being bogged down, mainly due to increased security screenings aimed to ensuring that the refugees entering America have no terror ties. Rodriguez argued that while scrutiny is necessary, it is also important to understand that refugees not receiving international care could “create a potential seed bed for radicalization.”

The Jewish community is still considered a top supporter of a more open immigration policy and of expanding absorption of refugees, despite the fact that since the end of the battle for Soviet Jewry, immigration policies do not affect Jews directly.

Rodriguez believes this approach is part of the community’s DNA thanks to its collective immigrant experience. “Even as we are prosperous, even as we have taken our place in American society,” he said, “we still remember the suffering, the challenges that preceded our being here in the United States.”