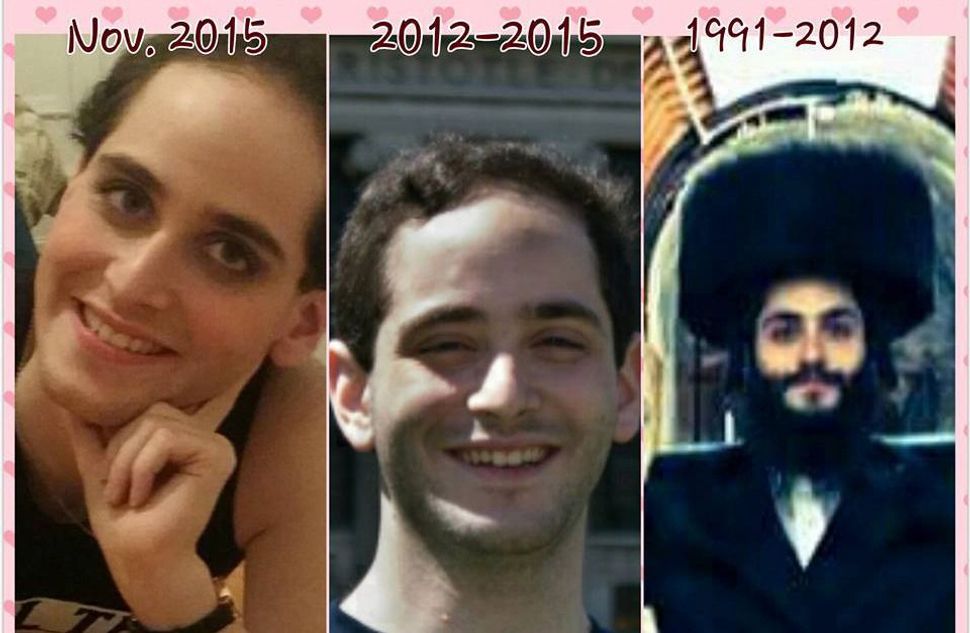 Srully Stein grew up in Brooklyn’s Hasidic Vizhnitzer community. He got married at 18, and started a family. Despite the fact that he looked much like any other Hasid, he did not feel comfortable in his male body.

No one, of course, in the ultra-Orthodox community had a clue that Stein was born as the wrong gender.

In recent days, Stein proclaimed her new identity in a post on her blog and changed her first name to Abigail.

“Since I was 6 years old,” Abigail Stein, 24, told the Forverts, “I realized that something was off.”

Sitting in a dormitory, known as The Bayit, a Jewish co-op for students from Columbia University, Stein appeared to be a person very much at ease in her new environment.

A year ago, Stein began studying at Columbia University, quite a long way from the Vizhnitzer yeshiva, where she attended school as a boy. She explained that the transition was hard, but thanks to the help of other ex-Hasidim and her own determination, it was successful.

Particularly noteworthy is how she came to the decision to leave her community, a decision that is, interestingly, connected to her gender. Stein described the discovery of her true gender as a “push,” which allowed her to examine her community as well as to reconsider her own identity. Among the worst flaws she discovered in her community was the ignorance and prejudice toward transgender individuals.

“It doesn’t sit well with the Hasidim. So, ignoring it badly harmed my morale. It made me feel even more broken,” she said. “I think that if I had known when I was 12 years old that it existed, it would have helped me considerably.”

Stein stresses that the concept of “transgender” lacks a context in the ultra-Orthodox community and is therefore a crucial subject to teach Hasidim.

“I want people to know that there are other Hasidim who feel just as I do.” Stein said. She added that within the first day of publishing her blog, around 15 Hasidim had already contacted her, asking for advice.

Stein gained some notoriety last summer when her friend and fellow ex-Hasid, Faigy Mayer, killed herself by jumping from a Manhattan rooftop bar. Stein was quoted in the Forward and several other publications about Mayer’s tragic suicide.

The first person she wanted to have such a positive effect on was her father. Before her blog was published she spoke to him in person about her transition. In her conversation with him, she wanted to primarily persuade him that transgender people exist in Jewish sources.

“I tried in a sincere, Jewish way to show him that it exists in concepts from Kabbalah and [Hasidism],” she said. “I said that here and there are discussions concerning a female soul in the body of a man.”

Although her father acknowledged this to be true, she said, he claimed that no one is capable of changing his or her gender and that there is just no way to know whether or not someone was born with the right gender.

Stein hopes to rekindle a relationship with her father, but admits it is possible he will no longer speak to her.

Such a negative response from her father would understandably cause her great pain, especially since Stein desires to be a source of happiness not only for him, but also for her entire family.

She chose the name ‘Abigail’ in order to reflect that wish. The name, which originally belonged to the second wife of King David in the Book of Samuel, means “the father’s joy.”

Besides her father, Stein spoke about her former wife and her son. Although she did not want to go into too much detail, she told me that she sees her son often, as per the custody agreement put in place between her and her ex-wife. However, despite the frequency at which Stein sees her son, she has not seen his mother since they divorced, when Stein left the ultra-Orthodox world. She is therefore unaware of whether her ex-wife has been informed about her gender transition.

Above all, Stein is optimistic about her future. She is satisfied with her new community, both at Columbia University and at Romemu, the egalitarian synagogue on Manhattan’s Upper West Side. In the coming weeks, she plans to formally celebrate her gender transition at Romemu. The ceremony will be a cross between a bat mitzvah and a naming ceremony, in which she will confirm her new name as well as read from the Torah.

A Yiddish version of this article first appeared in the Forverts