Meet Peter Gold, the Hero Medical Student We Can All Be Thankful For 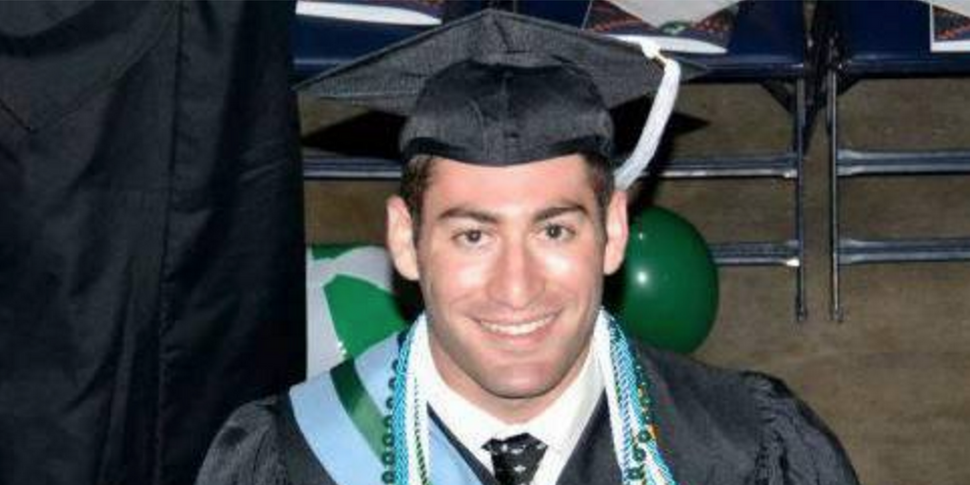 It’s perhaps no surprise that Peter Gold rushed to a woman’s aid when he spotted an armed attack unfolding on a darkened New Orleans street last week.

After all, helping people is in the Tulane University medical student’s blood: His dad, uncle, and grandfather are all doctors.

“I’m sure he would do the same thing next week if he saw it happening again,” Anmol Bhojwani, Gold’s fraternity brother, told The Forward. “Just the kind of guy he is.”

Gold, 25, was shot in the stomach at 4 in the morning last Friday, by 21-year-old Euric Cain, police say. The whole thing was caught on a shocking video that has gone viral.

The woman who was saved by Gold was treated and released. Gold, whose family rushed to his hospital bedside at University Medical Center New Orleans, has gone from critical to stable condition. 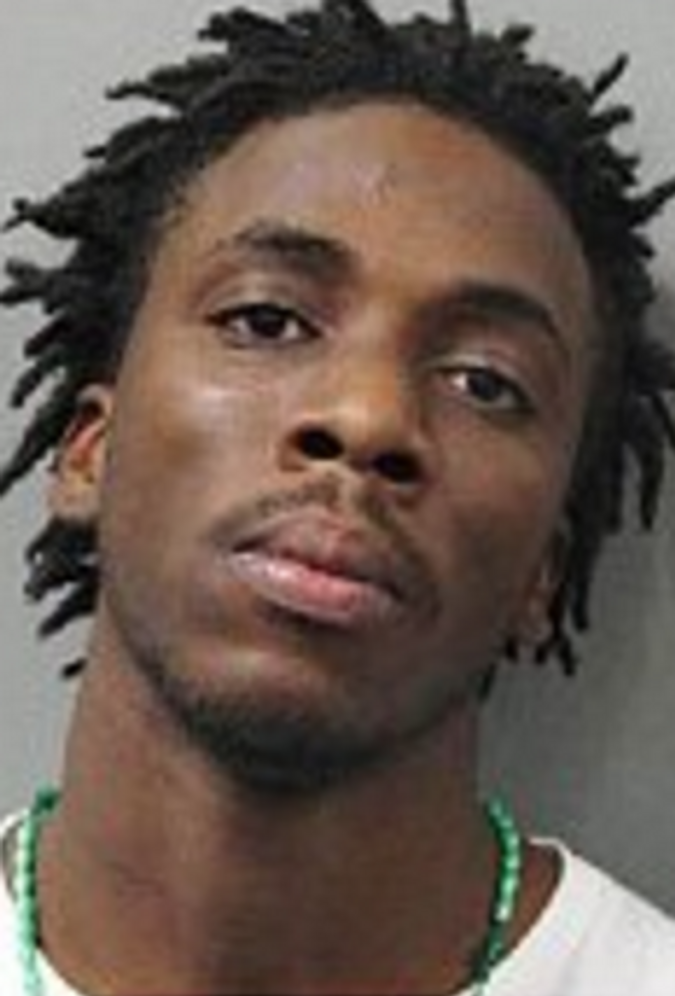 “Peter has progressively improved,” the family said in a statement on the eve of Thanksgiving. “The Gold family is very grateful for the care Peter is receiving.”

The family has said little else. But Gold’s pals, in interviews with The Forward, are lauding him — as are legions of social media users who are giving thanks for the Good Samaritan’s bravery.

Among them is Bonnie Curry, a host of KLTY in Dallas, whose post has been shared an amazing 77.000 times.

“For me, this proves that good still exists,” Curry said on Facebook, noting that Cain allegedly went to shoot Gold a second time — in the head — but his gun jammed.

“Heroes walk amongst us,” she said.

Countless others have posted similar sentiments.

“Thank you God for the jamming of the gun and for the heart you have placed in Peter,” reads another post that has also been shared tens of thousands of times.

And there is a growing call for President Barack Obama to invite him to the White House.

Gold, a fourth-year medical student, grew up in Florida and graduated from Lake Brantley High School, in Orlando’s northern suburbs, in 2008.

Like his dad, Dr. Robert S. Gold, is a prominent ophthalmologist, he chose Tulane for his studies — both for college and medical school.

As an undergrad, he was chosen for the Creative Scholars program, a rigorous pre-med curriculum that guarantees admission to Tulane graduate Medical School.

Even with his heavy course load, he was still able to be involved in the Tulane community and even spent time abroad in Prague, his Google Plus page indicates.

His frat brothers in the traditionally Jewish fraternity Sigma Alpha Mu were not surprised by news of the outgoing Gold’s heroics. 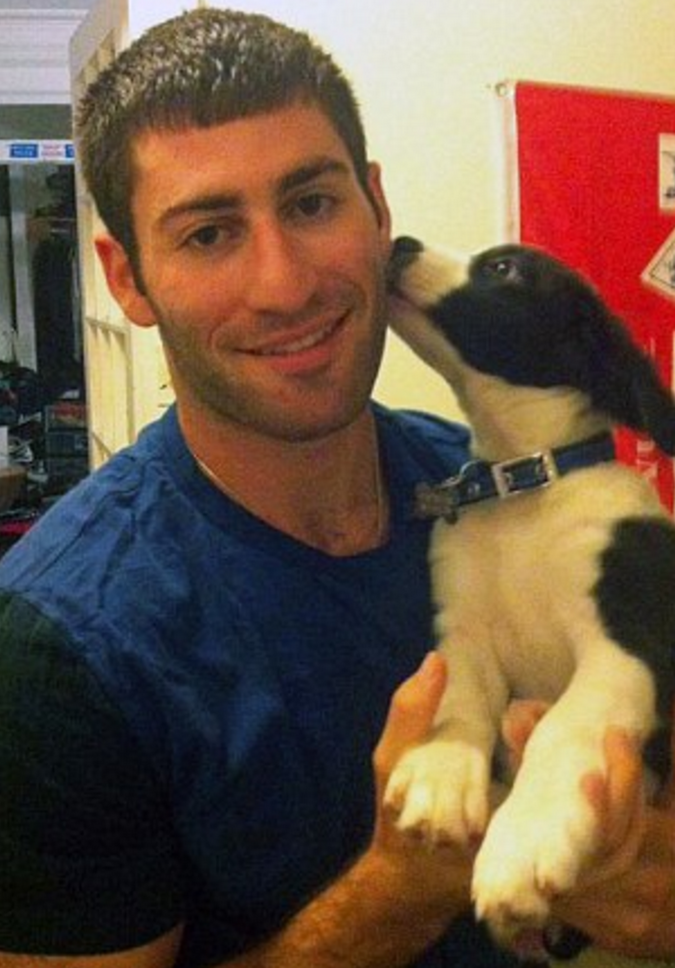 “Peter is the type of person who will instantly make anyone feel welcome and as if they are old friends,” Joey Lipton said. “He was an obvious choice for social chair of our fraternity due to his incredibly outgoing personality and ability to instantly connect with people and give everyone who knows him a sense of genuine friendship.”

Like his dad, he’s an avid golfer. And, judging from his YouTube page, he’s a big fan of club and electronic house music, like that produced by deadmau5 and Calvin Harris.

His dad told that he met Peter’s mom, Gail, at Tulane and that the hero has a married sister, Lisa, who also graduated Tulane University and lives in San Francisco.

The elder Gold also revealed that his younger brother is a dermatologist in Nashville, and their father (Peter’s grand-dad) is an infectious disease specialist “who was prominent in antibiotic development and the rubella vaccine.”

“I honestly could not think of being in any other profession but medicine. There is nothing more rewarding than helping people see better each and every day,” Robert Gold said. 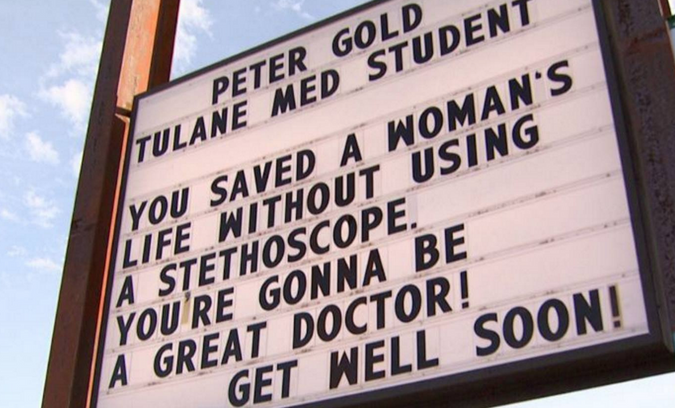 A billboard outside a New Orleans-area diner says it all. Image by Facebook

A billboard outside the Tic Toc Cafe in Metairie, La., right outside The Big Easy, seems to capture the sentiment of Peter Gold’s newly-found fans.

“You saved a woman’s life without using a stethoscope,” it says. “You’re gonna be a great doctor! Get well soon!”

Brittany Murphy, a waitress at the diner, said Gold deserves every word of praise and thanks.

“It was completely brave,” she told a local television news station. “Part of the reason the sign is up, he deserves for everyone to know his name.”

Meet Peter Gold, the Hero Medical Student We Can All Be Thankful For