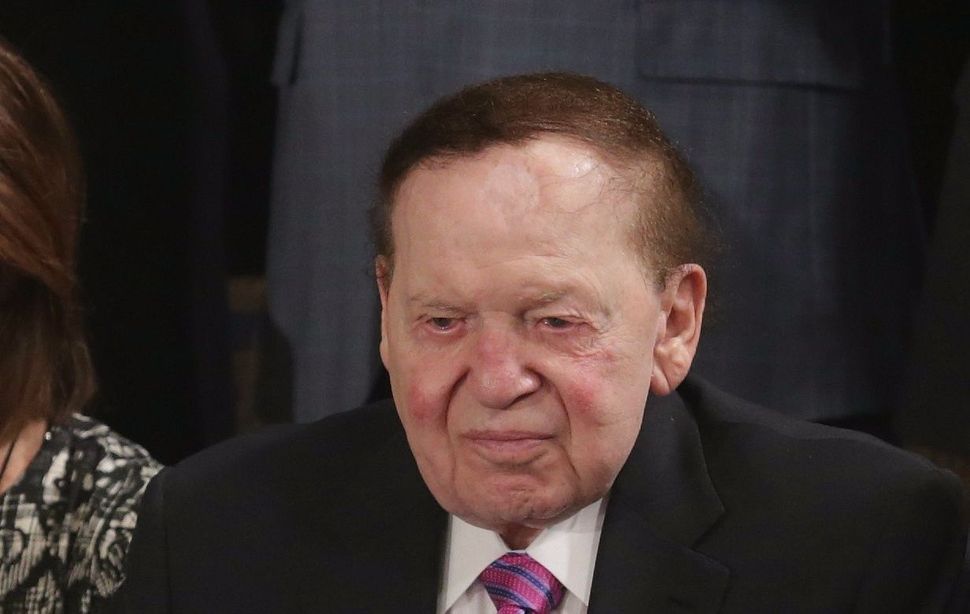 Billionaire casino mogul Sheldon Adelson has spent nearly $7 million on a little-known pro-Israel website run by the son of his former top aide at the Las Vegas Sands Corporation.

The website, From the Grapevine, has not previously been publicly linked to Adelson. It is the third media outlet whose hidden ties to Adelson have been revealed in recent weeks, following media reports about the Las Vegas Review-Journal, Nevada’s largest newspaper, which Adelson bought secretly in December, and JNS.org, a growing Jewish news service that the Forward revealed as being largely funded by Adelson.

The Adelson Family Foundation provided 96% of the revenues of reThink Israel Initiative, the tiny organization behind the website, in 2014, and 25% in 2013. The foundation gave it no money in 2015, and no longer funds the group.

While the reach of the From the Grapevine website is hard to gauge, its parent, reThink Israel, has been a source of employment and revenue for people close to Adelson and to the group’s founder, a former CEO of the contact lens giant Bausch & Lomb named Gerald Ostrov. ReThink Israel has paid $1.3 million in agency fees to Seiden, an advertising firm run by a close friend of Ostrov’s. It channeled another $2.9 million to Seiden to purchase advertising for the group.

Jon P. Leven, a former hospitality executive and reThink Israel’s COO, is the son of Michael Leven, former president and COO of Adelson’s Las Vegas Sands Corporation. Michael Leven was an early donor to the group. Ostrov, who hired Jon Leven, said he “was absolutely the best” person for the job.

The group’s CFO, Francis Stangota, was a colleague of Ostrov’s when he was a senior executive at Johnson & Johnson.

Today, From the Grapevine is a web content fire hose, blasting out six original blog posts every weekday. Its publishers say that traffic to the site is large and growing, but from the outside, From the Grapevine’s impact is difficult to discern: Comments sections that follow most stories are blank, and only 24 different websites have linked to From the Grapevine, according to the web tool Moz Open Site Explorer.

In 2013, before it launched its From the Grapevine website, reThink Israel branded itself as a new approach to Israeli hasbarah, a Hebrew term that translates loosely as pro-Israel “information” or “propaganda.” At that stage, Adelson was eager associate himself with the initiative, publicly announcing it on a panel in New York City that October. “This new hasbarah organization is going to make Israel cool,” he predicted.

That line appears to have come from the lips of Israeli Prime Minister Benjamin Netanyahu himself. Ostrov said that when Adelson discussed the project with Netanyahu in person, Netanyahu told them: ‘Tell everybody Israel’s cool.” When Netanyahu asked Ostrov how he could help the effort, Ostrov said: “Make sure nobody thinks we’re part of the government. Which we’re not.”

And then, almost as soon as it appeared, the reThink Israel campaign faded away. As the Forward has now learned, it quietly reemerged in early 2014 in a new form, as the website From the Grapevine. The not-for-profit behind the site is still called the reThink Israel Initiative. But the name reThink Israel, and any overt connection to Adelson, is now almost entirely obscured.

“If you have the name ‘Israel’ in your site [name] or social media [handle], you are essentially going to repel many of your viewers,” Ostrov said when asked about the name change.

Ostrov, who donates his time to the group, is also a close ally of Jewish leader Malcolm Hoenlein, who sits on the reThink Israel Initiative’s board. Hoenlein is the executive vice chairman of the Conference of Presidents of Major American Jewish Organizations, organized Jewry’s umbrella group for Israel-related issues.

For decades, Ostrov has argued that public perceptions of Israel can be improved by applying corporate-style marketing concepts to pro-Israel advocacy. “Our goal is…to show that Israel is like us,” Jon Leven told the Forward. “We believe that, over the long term, that that’s a way to create political support.”

In a 2012 speech promoting an early version of the group that became the reThink Israel Initiative, Ostrov likened his proposed pro-Israel campaign to a marketing campaign he ran for Johnson & Johnson Acuvue contact lenses in the 1990s.

“There were misperceptions,” he said of the lenses.

“It’s just a big word for ‘you don’t see as sharply as you could,’” the other replies.

The DNA of that contact-lens marketing campaign is apparent in reThink Israel’s simplified approach to the Middle East, and its interest in sex appeal. In a case study about the effort posted on Seiden’s website, the ad firm summarizes reThink Israel’s ethos: “No politics. No religion. Just stuff 18- to 24-year-olds care about. Like surfing, beer, hotties, style, music and changing the world. Except they’re all — that’s right — in Israel.”

Early in his career, while an executive at the pharmaceutical firm Ciba-Geigy, Ostrov was mentored by Hank Seiden, whose son, Matt Seiden, is the president and CEO of the advertising firm that reThink Israel worked with in 2013 and 2014. Ostrov recalled the elder Seiden, who died in 2008, as a “father figure,” and said Matt was a friend.

“It really came through a personal relationship,” Ostrov said of reThink Israel’s arrangement with the Seiden firm, to which the charity paid $3.4 million in 2014 and $800,000 in 2013. Ostrov said that he looked at various options before signing with Seiden. The firm’s bid, he said, was the least expensive and the best.

In an email, Jon Leven said that the $2.9 million in advertising purchased through Seiden went to campaigns with BuzzFeed, Dailybreak, Facebook, Twitter and StumbleUpon, among others.

Ostrov said that reThink Israel stopped working with Seiden in 2014 and moved its business to a company now called the Narrative Content Group, which created and maintains From the Grapevine. Narrative Content Group writes paid content for a number of sites, including its own Mother Nature Network, which posts environmental content sponsored by major corporations, including the paper manufacturer Georgia-Pacific.

Posts on From the Grapevine run from the somewhat informative to the nonsensical. Most are short, click bait-style items with an obvious Israel-related hook: A photo “displays the majestic beauty of the Dead Sea”, a lost flower was “rediscovered” in Jaffa. In some posts, the Israel content is buried or subtle: A quiz about board games mentions, in its fourth question, that Rummikub was “Israel’s no. 1 export game.”

Some posts have enjoyed viral traction, including one about a strange object found in a Jerusalem cemetery.

ReThink Israel’s 2015 annual report, which it shared with the Forward, claims that From the Grapevine received 13 million page views and 6 million visits in 2015.

Still, the website has not left much of an online footprint. Although reThink Israel says that its Facebook page has 300,000 followers, its main Twitter account, which has posted more than 3,000 times, has only 1,900 followers, a paltry number for a publication’s official Twitter feed.

“Our social media sites are tremendously effective,” Ostrov said. “Our distribution, our interaction, is tremendous.”

Ostrov said that he plans to continue to increase the effort. “What we want to do is, we want to get more reach,” he said.

Adelson, whose foundation gave the reThink Israel Initiative $5.6 million in 2014 and $900,000 in 2013, is no longer backing the group. Michael Bohnen, the president of the Adelson Family Foundation, did not respond to a request for comment. In 2015, Adelson turned his focus to a massive new pro-Israel campus effort called Campus Maccabees, which has reportedly raised $50 million from Adelson and other donors. Haim Saban, a wealthy Democratic donor dropped out of the project in September, reportedly due to concerns that Adelson’s project was collaborating with only right-wing groups.

“We’re grateful for what he gave us. He got us started. That’s a lot of money,” Ostrov said of Adelson’s 2013 and 2014 support for reThink Israel. “We’re taking this down the road where, we hope that, at the end of the day, this will be a major support plank for Jews everywhere.”