That Time Donald Trump Met Elie Wiesel — or Did He? 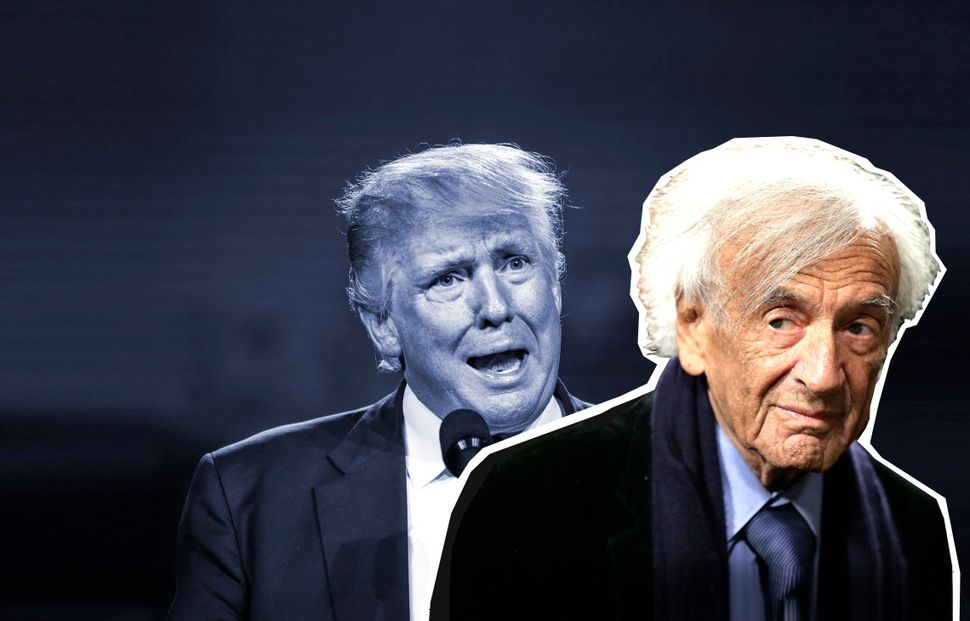 Elie Wiesel, who passed away last Saturday, left behind a moral legacy that will continue to shape the world’s views on history, humanity and the danger of bigotry.

He was close to President Obama but also a harsh critic of his policy at times. He was a willing ally to almost all politicians who sided with Israel and said they would fight genocide. But he mostly refrained from party politics, and did not leave a political will. That means various players are now scrambling to claim a connection to Wiesel. And it and makes the following passage, at the end of a New York Times article dealing with Donald Trump’s now-famous Star of David Tweeteven more intriguing:

“At a funeral service for Mr. Wiesel on Sunday, Ted Koppel revealed that Mr. Wiesel recently had lunch with Mr. Trump at the candidate’s invitation, according to two people at the memorial,” the Times story stated.

Logistically, such a meeting was unlikely; a meeting of the minds between the two men would be even more surprising.

A longtime acquaintance of the Wiesel’s, who had been in touch with him until Wiesel’s last weeks, wondered aloud whether such a meeting could have taken place “recently” as the article suggests. Wiesel, the acquaintance, who asked not to be named, noted that Wiesel’s health had deteriorated in recent months and it is highly unlikely that he could have had lunch with Trump recently.

Trump himself, in his tweet did not mention a recent meeting with the Nobel peace prize laureate. “On Saturday a great man, Elie Wiesel, passed away. The world is a better place because of him and his belief that good can triumph over evil!” Trump tweeted.

Trump’s campaign didn’t respond to an email seeking further details on the meeting.

Regardless of whether the meeting between the two actually took place, it is not clear what Trump and Wiesel would have discussed. While Wiesel, just like Trump, had been a critic of the nuclear deal with Iran, when it comes to treatment of minorities, the differences couldn’t have been greater.

These differences were highlighted in an op-ed published this week in The Hill by Dr. Mehmet Oz of the Dr. Oz Show and by Rabbi Shmuley Boteach. Boteach had known Wiesel personally and had also expressed views in favor of some of Trump’s policies, though he did not endorse the candidate.

“Calls to ban Muslims or any other ethnic group not only doesn’t make us safer but presents an immediate danger to our values which is the essence of what really protects us. This is the irony of divisive politics that Elie exposed,” Boteach and Oz wrote, pointing to Trump’s call to ban entry of Muslims to the U.S. without naming the candidate. Wiesel, they argue, “would caution us to stop offering incorrect promises to a panicked people grasping at any opportunity to control their destiny at the expense of others.”

Wiesel joined Boteach’s drive to defeat the Iranian nuclear deal last year, adding his name to public campaigns against the agreement and penning a full page New York Times ad demanding a complete dismantling of Iran’s nuclear program as part of any deal.

It was Boteach’s World Values Network that also brought Wiesel together with Sheldon Adelson, the Vegas casino billionaire who had emerged as one of Trump’s largest potential donors. At Boteach’s event honoring Wiesel, Adelson announced his support for Trump, a statement that was later followed up with a call to other Jewish Republican donors to join the effort to fund the Trump presidential campaign.

Wiesel’s memory has already been dragged into the political battlefield, in large thanks to comments made by Max Blumenthal, son of Clinton confidant Sidney Blumenthal. In his tweets, Max Blumenthal said Wiesel had “spent his last years inciting hatred, defending apartheid & palling around with fascists.” Responding to mounting criticism from Republican activists, the Clinton campaign disavowed Blumenthal’s comments, calling them “offensive, hateful, and patently absurd.”

That Time Donald Trump Met Elie Wiesel — or Did He?