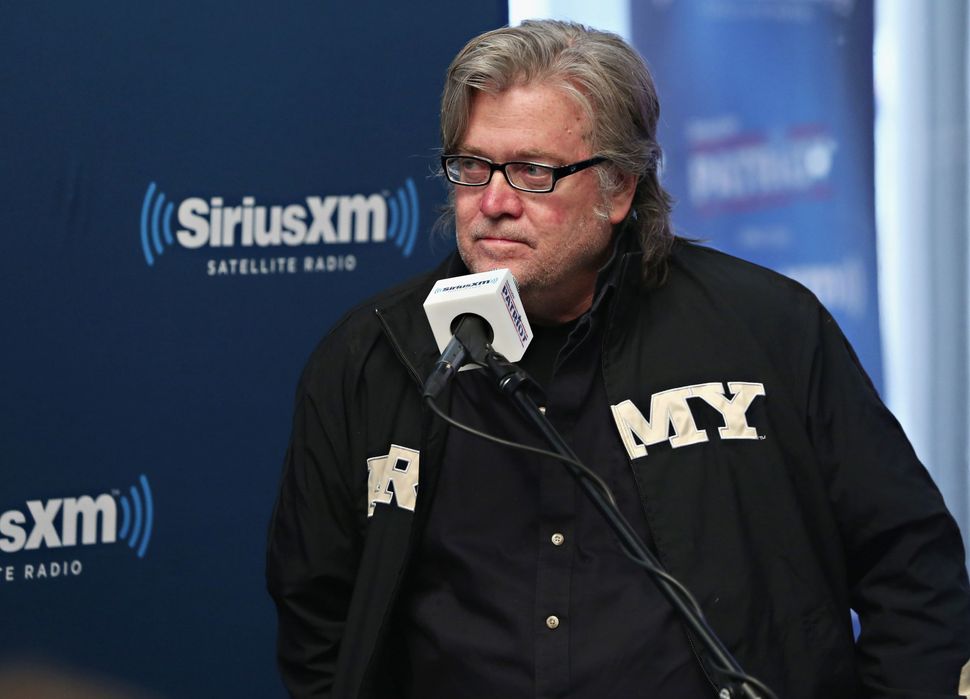 But as Breitbart News has become inextricably linked to Donald Trump with the August 17 appointment of the company’s chairman, Stephen K. Bannon, to run Trump’s campaign, the question of Jews and Breitbart News has taken on new urgency.

So is the conservative news website a peddler of anti-Semitism or just a strident voice that pushes the envelope in an ever more-polarized political world? Here’s what you need to know about Breitbart News and the Jews.

Andrew Breitbart, the conservative media provocateur who founded the site and died in 2012, was Jewish. So were many of his colleagues and successors, among them former Breitbart News editor-in-chief Joel Pollak and former Breitbart News editor-at-large Ben Shapiro (more on him later). The site has an Israel-dedicated vertical called Breitbart Jerusalem, where its coverage and opinion content are generally in line with the hawkish end of the pro-Israel spectrum

“They say that we are ‘anti-Semitic,’ though our company was founded by Jews, is largely staffed by Jews, and has an entire section dedicated to reporting on and defending the Jewish state of Israel,” Breitbart executives said in response to the Clinton campaign’s attack.

Clinton campaign manager Robbie Mook didn’t say why he thought Breitbart News was pushing anti-Semitic conspiracies, but he may have been referring to a recent dustup over a headline on Breitbart’s site that called anti-Trump neoconservative pundit Bill Kristol a “renegade Jew.”

The author of the piece, right-wing firebrand David Horowitz, is himself Jewish. Even so, the Anti-Defamation league at the time called the headline “inappropriate and offensive.” Writing in Slate, Michelle Goldberg argued that Breitbart was mainstreaming anti-Semitism.

”To define someone as a ‘Renegade Jew’ in a column about scheming elites written for an audience full of white nationalists is to signal to the sewers,” Goldberg wrote.

Shapiro, 32, quit Breitbart in March after the site appeared to side with the Trump campaign against a Breitbart reporter who claimed she had been assaulted by Trump’s then-campaign manager. (Local prosecutors declined to press charges against the campaign manager.)

After he quit, Shapiro was bombarded with anti-Semitic harassment on Twitter. Breitbart News responded to the harassment with an odd piece in which an author identified as “Pizza Party Ben” dismissed the notion that anti-Semitism even exists. “He has started playing the victim on Twitter and throwing around allegations of anti-semitism and racism, just like the people he used to mock,” the writer said of Shapiro. “Ben, no one hates Jewish people.”

In an August 18 op-ed in the Washington Post, Shapiro accused Bannon of turning Breitbart “into a cesspool of the alt-right,” a movement he described as “shot through with racism and anti-Semitism.”

Milo Yiannopoulos is a senior editor at Breitbart and a leading figure in the so-called “alt-right” movement that Shapiro decries. He is perhaps best known for being permanently banned from Twitter for allegedly leading a harassment campaign against “Ghostbusters” star Leslie Jones,

In a long March article at Breitbart, Yainnopoulos, who identifies as having Jewish ancestry, brushed away allegations that the alt-right is anti-Semitic. He said that anti-Semitic caricatures are the “long hair and rock’n’roll” of 2016, employed mostly to “shock older generations.”

Shapiro, in his own March essay, pointed out that people who Tweet like racists are often indistinguishable from actual racists.

“When I can’t tell the difference between a David Duke tweet and a tweet from Milo’s biggest fans, that’s not my fault – that’s the fault of the person tweeting like David Duke,” Shapiro wrote.