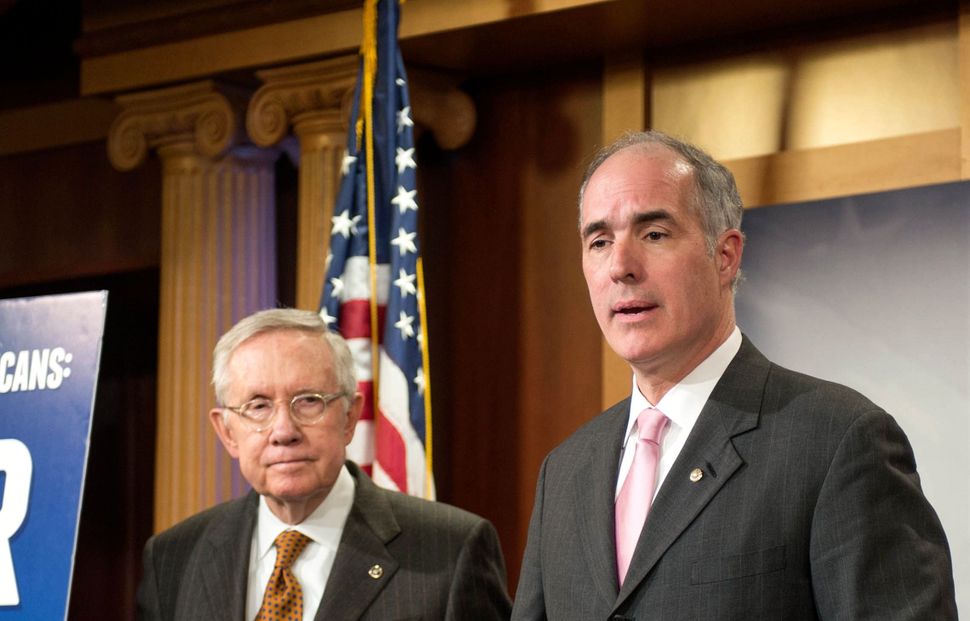 After pro-Palestinian student activists set up mock West Bank checkpoints on the campus of the University of California, Berkeley in 2012, Jewish groups filed a civil rights complaint with the federal government.

Jewish organizations charged that the mock checkpoints, meant as a protest against the Israeli government, combined with other incidents to create a hostile environment for Jewish students.

The federal Department of Education dismissed the complaint, saying that the protest was an instance of free expression.

Now, a new bill speeding through Congress could change the way the Department of Education reviews such complaints. If it succeeds, critics say, the federal government could determine that protests like the mock checkpoint constitutes civil rights violations.

The bill “opens the door to considering anti-Israel political statements and activities as possible grounds for civil rights investigations,” said Michael Macleod-Ball, chief of staff of the American Civil Liberties Union’s legislative office in Washington. “Whether you agree with the BDS movement or not, aligning oneself with it and even participating in the effort should not subject someone to a civil rights investigation.”

Sponsored by Senator Bob Casey of Pennsylvania and Senator Tim Scott of South Carolina, the bill passed the U.S. Senate with bipartisan support on Thursday, just days after its introduction. Congressman Peter Roskam of Illinois introduced a companion bill in the House on Thursday afternoon.

The bill would instruct the U.S. Department of Education to consider a definition of anti-Semitism that includes “demonizing Israel” or “judg[ing] Israel by a double standard” when investigating federal discrimination claims.

The bill has the support of AIPAC and the Anti-Defamation League, among other mainstream Jewish groups.

“The intent here is simple,” said Casey in a speech on the Senate floor on Thursday morning. “To define anti-Semitism at long last…so that the Department of Education can effectively investigate allegations of discrimination motivated by anti-Semitism under the Civil Rights Act.”

Casey and Scott’s bill would have the DOE’s Office of Civil Rights take into consideration the State Department’s definition of anti-Semitism when considering claims of discrimination on the basis of race or national origin. The bill states within its text that it does not impinge on First Amendment rights.

The State Department definition of anti-Semitism says that applying a double standard to Israel, blaming Israel for “all inter-religious or political tension,” or delegitimizing Israel all constitute anti-Semitism.

That anti-Semitism definition, previously employed by the State Department for judging anti-Semitism overseas, has not previously been used by the federal government in the context of domestic civil rights claims.

Liz Jackson, a staff attorney with the group Palestine Legal, which advocates for pro-Palestinian activists, said that the Casey bill could make it easier for university and federal authorities to restrict the speech of student activists.

“Before Congress imposed its discredited redefinition of anti-Semitism on the DOE, civil rights investigators consistently found that actions critical of Israel — like mock military checkpoints, or teach-ins on Gaza — are the kind of free-speech expression to be expected on a college campus and are not anti-Jewish harassment,” Jackson said. “After this legislation, it could go the other way.”

Jackson added that much would rely on other factors, such as the staffing of the Office of Civil Rights, which investigates civil rights claims for the DOE.

The bill comes amid years of struggle between Jewish organizations and pro-Palestinian campus activists. Jewish groups including the Zionist Organization of America have filed multiple civil rights claims with the Office of Civil Rights of the federal Department of Education, claiming that various universities have violated Title VI of the Civil Rights Act by allowing a hostile environment against Jewish students.

While Title VI of the Civil Rights Act protects national groups, and not religious groups, the Office of Civil Rights has allowed Jews to bring claims as a group with shared national origin. Since 2010, Jewish groups have argued that some anti-Israel activity should be considered anti-Jewish discrimination under Title VI.

“If you’re harassing Jewish students on the basis of their pro-Israel stance, and it’s depriving them of an equal educational opportunity, that’s not protected speech,” said Michael Lieberman, the ADL’s Washington counsel. “We would not have supported this bill if we thought it would restrict legitimate speech.”

While the bill explicitly says that its provisions do not infringe upon First Amendment rights, Palestine Legal’s Jackson doesn’t buy it.

“That line at the end was shoehorned in, and everything else about the bill is clearly an attack on First Amendment rights,” Jackson said. “To stick in a rhetorical nod basically saying, ‘Oh, yeah and the First Amendment,’ cannot save an unconstitutional bill.”

The ZOA’s Mork Klein, for his part, said that the new law would help his organization’s legal efforts.

“We hope this legislation will help us in our efforts to minimize and more successfully fight against the increasing and dangerous scourge of campus anti-Semitism, led primarily by Muslim student members of Students for Justice in Palestine, and increasingly by anti-Semites affiliated with Black Lives Matter,” Klein said

In recent years, Jewish groups have put efforts into boosting the spread of State Department’s definition of anti-Semitism. Last year, Jewish organizations lobbied the Regents of the University of California to officially adopt the State Department definition of anti-Semitism. A working group appointed by the Regents chose not to, citing feedback that it could violate free speech principles.