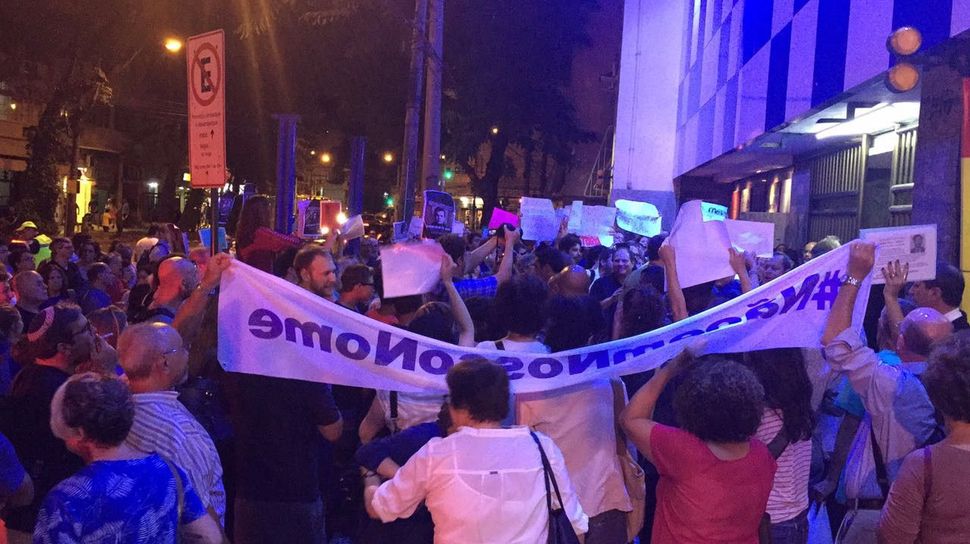 When a Jewish sports and social club in Rio de Janeiro hosted Jair Bolsonaro, a rising far-right politician known for his open bigotry, he didn’t disappoint.

As some 200 protesters outside Hebraica chanted, “those who incite torture have forgotten the Shoah,” Bolsonaro, who has indicated he intends to run for president next year, faced some 300 audience members and compared the descendants of escaped African slaves who have lived for centuries in their own settlements, to obese and lazy livestock.

“The lightest Afro-descendant there weighed seven arrobas,” he said, using a weight measurement applied in Brazil exclusively to cattle. “They do nothing. I think they’re useless even for procreation.”

He advocated dispossessing Brazilian Indians living on indigenous reservations of their homes and land, saying, “Wherever there is land for Indians, there’s a wealth underneath that land. We must change that.”

On the other hand, he voiced admiration for the Japanese, explaining, “Has anybody ever seen a Japanese person begging around? Because it’s a race that knows how to get their shit together.”

While giving personal background about his children—four sons and a daughter—he related, “I had four men, but [with] the fifth I was weak and had a girl. She’s six years old and was made without any enhancers.”

The crowd inside the building loudly cheered his remarks, with the loudest applause reserved for his comments against minority groups.

For the wider Jewish community, the speech, which took place on April 3, was a watershed event—one that exposed an open wound among Brazilian Jews, who have historically been associated with the country’s left.

Indeed, when Brazilians endured a brutal military dictatorship between 1964 and 1985, it was a rabbi who performed one of the bravest acts of public resistance. Hundreds of political opponents were kidnapped, tortured and murdered by the regime during that period. But after Jewish journalist Vladimir Herzog was tortured and killed in 1975, it was São Paulo Rabbi Henry Sobel who rebutted the regime’s false claim that Herzog had hanged himself in prison; Sobel publicly refused to bury him in the area outside the cemetery designated for suicides, implicitly rejecting the regime’s lie.

That longtime strain of liberalism within this community of some 107,000 is not dead. But the welcome the Rio Hebraica club gave to Bolsonaro reflects a deep polarization process that has cleaved Brazilian Jewry no less than it has the rest of the country; and perhaps, from trends evident elsewhere, much of the world.

“I have never seen our community so divided,” one of the protesters who stood outside Hebraica Rio told the Forward. He asked not to be named, due to his involvement with Jewish organizations.

According to this protester’s description, the peaceful demonstration that came together on the night of Bolsonaro’s speech was “very organic” and not organized by any group. There were members of Zionist youth movements, such as Habonim Dror and Hashomer Hatzair, as well as unaffiliated Jews who identify with progressive views. He said that the youth movements had asked Hebraica for a meeting before the event, and even for tickets to attend the one-hour lecture – a closed affair for selected members of the club – but never got any response.

The events that led up to Bolsonaro’s controversial appearance actually started weeks earlier, some 265 miles away in São Paulo, Brazil’s largest city. There is a Hebraica club here as well, although it is completely independent from the Rio unit. At the beginning of February, a rumor emerged that the São Paulo club had invited Bolsonaro to address its members, sparking an uproar.

In an online petition some 3,800 people urged the São Paulo Hebraica’s president to cancel the event. But soon after, a second petition was launched by a group claiming they had a “democratic right” to attend Bolsonaro’s lecture. In four days, 33,000 people – many of them not related to the Jewish community – signed the document online. Ironically, Hebraica São Paulo never sent a formal invitation to Bolsonaro in the first place.

“It would be more appropriate to have an event with all potential candidates, following a balanced and democratic model,” Avi Gelberg, the president of the São Paulo club, told the press.

But Luiz Mairovitch, president of Hebraica Rio, didn’t agree. He told Folha de S. Paulo, a Brazilian newspaper, that Gelberg’s decision was “hasty”, and sent for one of Bolsonaro’s sons, a local councilman, to let his father know he was welcome to speak there. Mairovitch declined to comment for this article.

The online backlash against the Jewish community was harsh. Carla Knoplech, a Jewish social media expert who lives in Rio, pointed to “a general discourse on the day of the lecture, relating [Jews] to ‘what they haven’t learned from history.’”

“There was a much larger group of Jewish people who were against his speaking [at the club] and used social media to protest,” she observed. “They didn’t want the Jewish community harnessed to this politician’s ideas, not even for one lecture.”

That Bolsonaro, a 62-year-old member of Brazil’s legislative congress, would make the kind of comments he did before his Jewish audience was quite predictable. 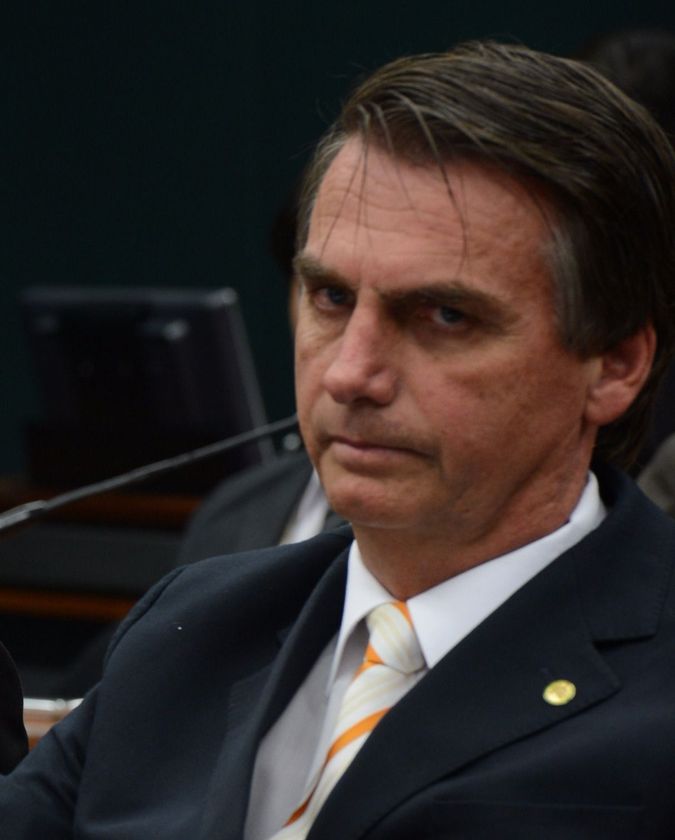 Man Of The People: ‘I wouldn’t rape you because you’re not worthy of it,’ Bolsonaro told a fellow lawmaker who accused him of rape. Recent polls put him in second place as a presidential contender in 2018. Image by WikiCommons

In 2014, Bolsonaro ignited a firestorm when he called fellow Congress member Maria do Rosario “ugly” in response to her charge that he was a rapist, adding: “I wouldn’t rape you because you’re not worthy of it.”

In 2011, when Afro-Brazilian singer and actress Preta Gil asked him what he would do if his child fell in love with a black person, he replied that he would “never allow this kind of promiscuity,” but added that his “children were very well-educated.”

Last year, when Congress voted to impeach Brazil’s elected president, Dilma Rousseff, who fought as a guerilla during the years of military dictatorship, Bolsonaro dedicated his vote from the floor of the legislature to Colonel Carlos Alberto Brilhante Ustra—an army officer whom Rousseff says tortured her when she was captured. In 2008, Ustra became the first military officer to be cited in a civil court ruling for torturing prisoners.

Many dismiss Bolsonaro, a retired military officer, as a nutcase. But he has emerged as a leader of the Brazilian far right, and others warn that he could end up as “the Brazilian Donald Trump” in the next presidential election, which is to take place in October, 2018. Recent polls place him second among major contenders amid one of the worst political and economic crises the country has ever seen.

In many ways, the polarization now gripping Brazil resembles the escalation that marked the 2016 U.S. election cycle. The process reached its peak in August, after Rousseff’s impeachment. It was an ousting denounced by many on the left as nothing short of a coup. Those who supported her removal, meanwhile, place all the blame for Brazil’s current economic mayhem on Rousseff and her Workers Party, which had held the presidency since 2003.

Meanwhile, a massive anti-corruption investigation effort known as “Operation Car Wash” has exposed nearly every party and relevant political figure – left, center, and right – as part of a graft and bribery scheme worth billions of dollars. Every single former president of Brazil since 1986 is currently under investigation for receiving illegal campaign donations.

Bolsonaro brags on social media that he is not among those being investigated, unlike so many of his peers.

Jews who admire Bolsonaro point, among other things, to the deep admiration for Israel that he has expressed on several occasions. Last year, he used social media to publicize a week-long visit to the country. In one of his posts, he praised the fact that “90% of the Israeli population serves in the Army, and owning guns is not only a right, but a civic duty.” He joined the festivities for Israel Independence Day in Jerusalem, paid visits to the Ministry of Agriculture and the Ministry of Public Security and had a meeting with Yuli Edelstein, a member of the Likud party and Speaker of the Knesset since 2013. The tour grand finale was a baptism ceremony in the Jordan River, performed by the chairman of Bolsonaro’s Social Christian Party, who is an evangelical pastor.

The Jewish community in Brazil, which is mostly white and upper-class, is just as divided as the rest of the country. So unsurprisingly, following the wild night of Bolsonaro’s appearance at Hebraica Rio, communal reaction remains split.

“I went there to see a charismatic politician, who’s been the talk of town (including among the left),” said Sérgio Kandelman, a 49-year-old physician who attended the Hebraica Rio lecture. For 2018, he said, “What we don’t want any more of are the same names, who are up to their ears in the muck that [Operation] Car Wash is bringing to light.”

Kandelman described Bolsonaro as a politician with “an unmistakable style [who] thus is both loved and hated. But he appreciated that the man expected to be a major presidential contender next year “came to speak about his insights on the development and the autonomy of Israel.”

Rabbi Nilton Bonder – ordained at the Jewish Theological Seminary in New York City and head of an influential congregation in Rio – accused Hebraica Rio of claiming to represent the Brazilian Jewish community, when in fact it doesn’t. Referring to Bolsonaro’s rhetoric, the rabbi said he “cannot imagine anything more contrary to the foundations of Jewish tradition.”

Conib (the Israelite Confederation of Brazil) wrote in a short statement simply that the community “is intransigent in defending democracy, tolerance, and absolute respect to all minority groups.”