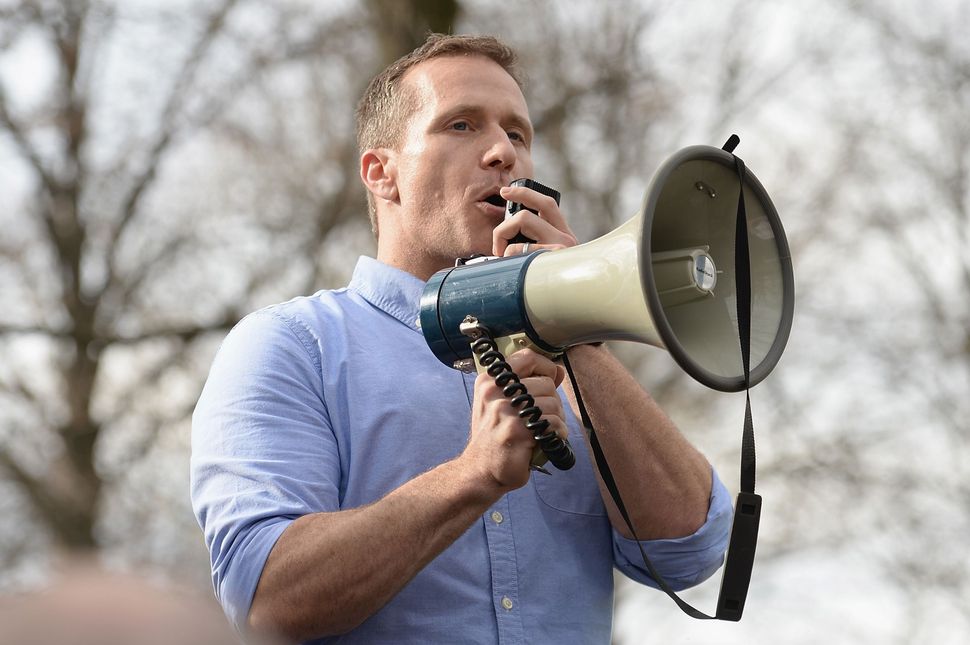 This tweet from Missouri state senator Rob Schaaf (R-St. Joseph) encapsulated what many in the Show-Me State were thinking Thursday morning after hearing the news about Republican governor Eric Greitens – he’s done.

Local TV station KMOV reported on Wednesday night that Greitens had an extramarital affair in 2015, and allegedly tried to blackmail the woman involved.

Within hours of the report being aired, the up-and-coming political sensation became a liability to his own party and to his supporters, including some in the Jewish community, leading many observers to question his political future.

Greitens’ statement in response, acknowledging the affair but denying any blackmail attempt, did little to quell the storm.

Back at home, fellow Republicans in the Missouri legislature issued a statement saying they find the allegations “shocking and concerning.”

And the Republican Jewish Coalition — a staunch supporter of Greitens, the only Jewish governor in America — sounded a skeptical tone regarding his planned speech at the group’s conference next month.

“That is a decision that he and his wife will have to make in the coming weeks as they figure out how best to move forward,” RJC executive director Matt Brooks told the Forward in a statement. “Eric is family to the RJC and as such our thoughts and prayers are with him and his family during this difficult time,” he added.

In a series of statements issued through his lawyer, Greitens acknowledged having an affair in 2015 with a woman who had been his hairdresser. According to KMOV’s report, Greitens convinced the woman to come to the home where he lives with his wife and two children, explaining that he could not be seen with her in public. (The report was based on a recorded phone call provided by the ex-husband of the woman, in which she details the encounter and her relationship with Greitens.)

The woman claimed in the recording that following their sexual encounter, Greitens blindfolded her, used tape to tie her hands, snapped a photo, and told her: “You’re never going to mention my name, otherwise there will be pictures of me everywhere.” Greitens denied this allegation, stating, “There was no blackmail and that claim is false.”

In his statement, Greitens asked for forgiveness from the public, and said that “with God’s mercy [his wife] Sheena has forgiven and we have emerged stronger.” Sheena Greitens issued her own statement saying that they have a “loving marriage” and that “anything beyond that is between us and God.”

How severely will this scandal affect a Republican rising star known for holding aspirations beyond the governor’s mansion?

Dave Robertson, professor and chair of political science at the University of Missouri – St. Louis, said a lot depends on whether the story proves to be more than just a politician’s extramarital affair. “He can survive an affair, damaged, but he can survive. Then he can tell Republicans across the country that the voters of his state have forgiven him and so can others.” Still, he said, even if infidelity was the worst of his sins, Greitens may have to put his national aspirations on hold and focus on his local constituency.

But the blackmail allegations are making it difficult for Greitens to turn the page.

Some Missouri senate Republicans and Democrats are demanding a criminal investigation into the case. The state’s attorney general has yet to respond to these calls.

Greitens, who is 43, entered Missouri politics as an outsider and swept the 2016 gubernatorial elections. A former decorated Navy SEAL, Rhodes scholar and successful author, Greitens brought an impressive resume to support his fiscal conservatism, pro-gun and anti-abortion politics, and a Trump-like promise to “drain the swamp.” Many identified him as a potential national leader on a fast track to 1600 Pennsylvania Avenue.

But a rough first year in office earned Greitens many detractors, including within his own party. The press, lawmakers and rivals were on his case for a lack of transparency and for his extensive use of “dark money” to fund his political campaign. He was accused of not being responsive to the claims and of using funds from undisclosed sources to set up a non-profit supportive of his agenda.

Even so, in Jewish Republican circles, Greitens was still a model politician worthy of their admiration and political contributions. Greitens’ list of donors includes RJC board members Sheldon Adelson, Bernie Marcus and Ron Weiner, as well as Jewish hedge fund billionaire Steve Cohen.

Donors and supporters now hold the key to Greitens’ political future, and much depends on whether the blackmail allegations are investigated. “He has a reputation of being a bully,” said a Missouri political insider, “so if these stories are true, it will play into this image and could be way more damaging for him.”