Why Some Jews Are Celebrating Shavuot At IHOP 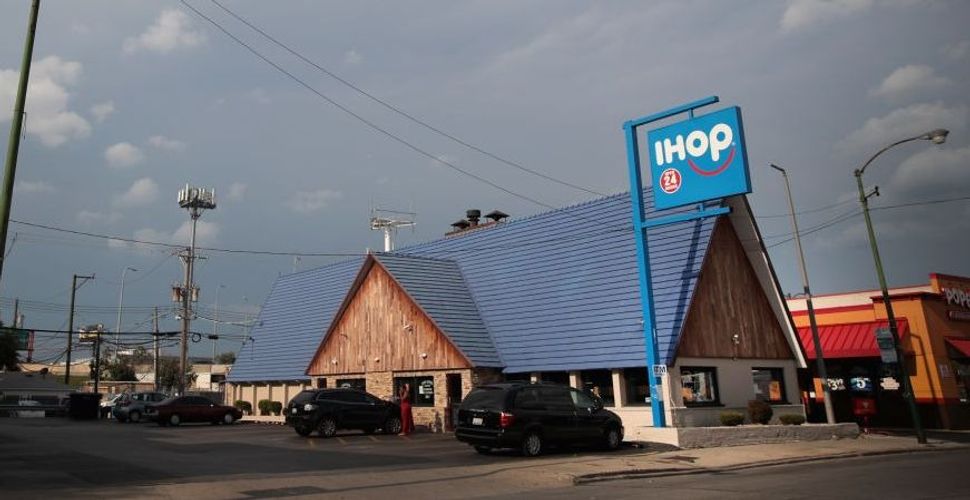 (JTA) — On Saturday night, when Lex Rofeberg convenes a group of Jews to study Torah, he expects to pore over Jewish texts. He expects to eat cheesecake. And he expects to decide between 12 different types of pancakes on a thick, laminated menu.

Like many rabbinical students, Rofeberg will observe the Jewish holiday of Shavuot with an all-night study session. But he’ll be one of the few people doing it at an IHOP.

The relatively obscure festival celebrates the traditional giving of the Torah to the Israelites, and Jews have historically stayed up until sunrise on its first night studying holy books and eating dairy foods.

These study sessions usually take place at synagogues. But IHOP is a large restaurant chain open 24-7, so Rofeberg thought it would be the perfect place for a twist on the tradition.

“We have got this dairy thing of Shavuot, we’ve got the all-night elements, and Waffle House and IHOP are open all night and have a bunch of dairy products available,” said Rofeberg, 27, who is a student at Aleph, Renewal Judaism’s rabbinical school. “What would it look like if we took Shavuot and put it in those spaces?”

Rofeberg will be inviting followers to an IHOP in Providence. Others took him up on the idea and similar sessions will take place at a Jackson, Mississippi IHOP, and at diners in Maryland, Washington D.C. and possibly a few other cities.

Besides the location, Rofeberg’s program will look a lot like traditional Shavuot study at a synagogue: A few speakers will each teach classes based around Jewish texts, with opportunity for people to break off into their own discussions. In his class, Rofeberg plans to discuss different English translations of Kol Nidre, the Yom Kippur prayer.

A native of Wisconsin, Rofeberg fell in love with Shavuot when he learned about it in college. Even though the holiday is observed by fewer Jews than Passover or Hanukkah, Rofeberg thinks it’s a better fit for the modern American Jewish experience: It combines intellectualism, schmoozing and unhealthy portions of food. Pioneering the observance in a comfortable location like a diner, he said, could open the holiday up to more people.

“I was flabbergasted that this wasn’t universally understood as the most amazing thing in the Jewish calendar year,” Rofeberg said. “If I had been a 7-year-old and you had told me, ‘Hey, Lex, you have this Jewish thing coming up, you get to stay up all night, eat a lot of cheese and learn with your friends’ — that’s a Jewish nerd’s dream.”

Part of the inspiration for his Shavuot idea came from Rofeberg’s own time living in Jackson in 2014, where he worked at the Institute for Southern Jewish Life. In the south, the Waffle House chain is a cultural touchstone and communal meeting spot.

The person running the Shavuot program in Jackson this year, Leah Wittenberg, opted against meeting at Waffle House because of incidents of alleged police brutality that have taken place recently at its franchises. But she said the chain and others like it would be natural places for southerners to meet and hang out for a few late-night hours.

“In terms of fast food and breakfast food, it’s a lot about the communal space,” said Wittenberg, who has lived in Oregon, Illinois and Massachusetts. She moved to Jackson two years ago and runs Young Jews of Jackson. “The reason Waffle House is so huge is because it’s kind of a meeting place. People will come there, so its not necessarily about the food.”

The location and cuisine were also a cultural draw for Guy Tabachnick, an incoming doctoral student in linguistics who will be running the D.C. program. But Tabachnick’s heritage drew him to a classic 24-hour diner, like the ones that dot the New York City area.

“I grew up in New York, and my grandparents are from North Jersey, so diners are my favorite restaurants,” Tabachnick said. “I like learning things and preparing lessons. It seemed to be a cool opportunity to learn from other people and present some sort of interactive plan of study.”

The Shavuot idea fits in with Rofeberg’s other work, which seeks to test the borders of mainstream American Judaism. Renewal, Rofeberg’s movement, was founded as a kind of combination of Hasidic Judaism with the countercultural ethos of the 1960s. Rofeberg is the co-host of the Judaism Unbound podcast, which features conversations with Jewish thinkers and activists. He’s also involved in IfNotNow, the group of young American Jews protesting Israel’s control of the West Bank.

Rofeberg understands that traditionally observant Jews who keep kosher and refrain from using money on holidays may not feel welcome at his event. But he says most of those people already have spaces to study on Shavuot, while he’s targeting people who don’t. He also acknowledges that this is an experiment: Kosher food could be an issue. So might the noisy environs of a chain restaurant.

“I want to create a space where things like internet usage are going to be OK,” he said. “That wouldn’t be the way an Orthodox space would observe Shavuot. My main audience for this is folks that don’t already have a Shavuot practice, because I really do believe Shavuot is this magical holiday and I want it to be available and accessible to all sorts of different people.”

None of the event organizers knows exactly what to expect from the waiters on Saturday night. But they all feel like a raucous conversation over pancakes should be no problem.

“It’s probable that we’ll run into some trouble, but any 24-hour diner has an expectation for strange things going on,” Tabachnick said.

The post Why this rabbinical student is celebrating Shavuot at an IHOP appeared first on Jewish Telegraphic Agency.

Why Some Jews Are Celebrating Shavuot At IHOP