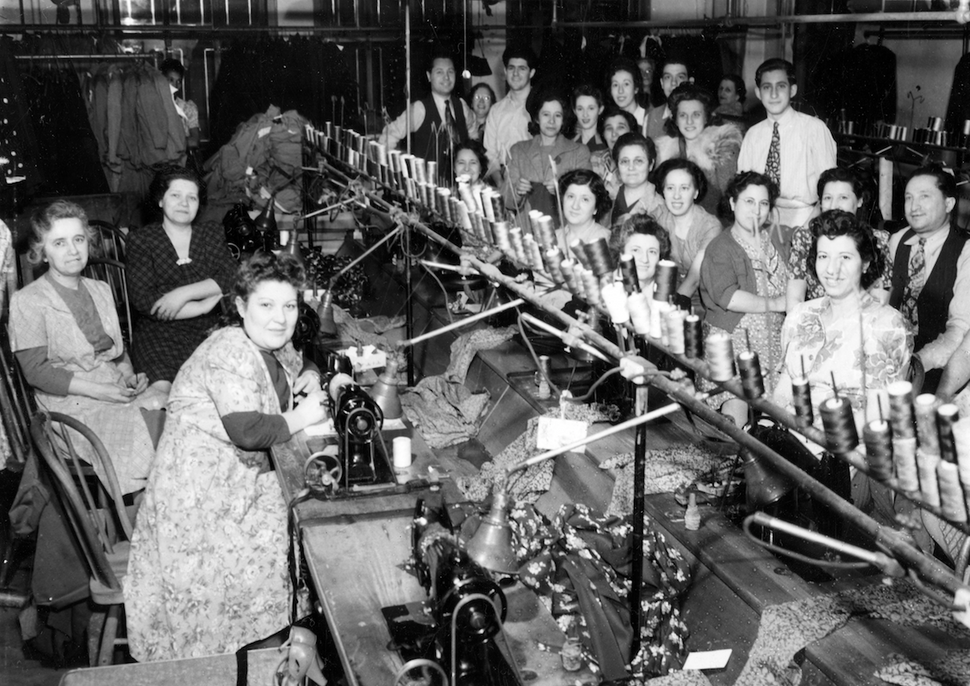 The primarily female staff of the Gracette Dress Company. Circa 1940. Image by Forward Archives

Manhattan’s legendary garment industry was the “welcome mat” for Jewish immigrants to the city for nearly fifty years. The jobs they found there, such as cutter, sewer and trimmings supplier, helped propel New York’s Jews into the middle class in the late 19th and early 20th century.

In 2018, Manhattan’s garment industry is at risk of disappearing altogether, yet the synagogues that served those greenhorns are not. They might even benefit from the changes to the neighborhood.

Rabbi Norman Listokin, of the Garment Center Congregation, guarantees three square services a day. He says that you can always get a minyan, or a quorum, of congregants to pray in its current location near Broadway and 38th Street.

The promise remained unbroken for a recent post-workday service. At a few minutes after five, only a few people mulled about the chapel.

Mr. Landau, shaking his head: “I just missed you, rabbi.”

By 5:15 p.m. — the time indicated on the synagogue’s website — services were underway.

These days, the professionals in the pews tend to be lawyers, accountants and advertising executives. Around the Congregation, the Garment District has steadily shifted away from garments, with former manufacturing hubs becoming hotels and high-rise office buildings. A new plan from the New York City Council, announced in early June, hopes to preserve at least a portion of the area’s fashion industry for years to come. It may not save the District’s remaining Jewish-owned businesses. But for the area’s best-known Jewish institutions — the synagogues, the kosher deli — fewer garment factories may be the key to their own long-term survival. More offices, these days, means more Jews.

“Any time you have a business that is dependent on one sector, it’s not as healthy as when you have a diverse clientele, in terms of its business and people’s backgrounds,” said Ronnie Dragoon, owner of Ben’s Delicatessen on West 38th Street. “Ben’s is better off with offices than we are with factories because of the cost of a corn beef sandwich.”

Today’s Garment District is a shrinking stretch of Midtown Manhattan. Nominally bounded by Fifth Avenue to the east and Ninth Avenue to the west, between 34th and 42nd Streets, the area has seen its namesake industry gradually move out of state and overseas over the past 70 years. Only a small fraction of its space is now given over to actually making clothes. In 2009, the neighborhood had 1.1 million square feet of garment manufacturing. Now, that number is down to 700,000.

Rising rents have pushed longtime vendors out, with some following other outgoing factories to designated industrial zones in Brooklyn. In their place: banks, hotels and office space.

The City Council’s new plan, the result of negotiations with leaders in the area’s fashion industry, is meant to counter the downward trend. It gives financial incentives to landlords who keep manufacturers as tenants, and provides for $20 million from the city to help buy a designated building solely for manufacturing. It even limits the number of hotels that can go up in the area.

All told, the City Council hopes the plan will preserve about 300,000 square feet of garment manufacturing for at least a couple decades to come.

The plan has not been met with enthusiasm across the board. Steve Kokin, who designs hats under the moniker KOKIN and owns a hat-making shop on 38th Street, says it doesn’t go far enough to protect the garment businesses that remain. He feels that the industry has long been ignored by the city.

“When I started my business there were stores to sell to, hundreds and hundreds of stores, and they’re all gone,” Kokin said.

He was recently forced to close his longtime showroom on the Upper East Side, and now has seven employees, down from a high point of 22. Kokin, who is Jewish and has been in the industry for 35 years, says he remembers when Holocaust survivors were among the workers pushing fabric through the sewing machines.

Kokin wishes the plan had included caps for rent in garment industry spaces. He recently signed an expensive new lease, and now isn’t sure he’ll be able to afford it.

“It’ll be a loss for New York if they push everybody out,” he said.

The industry has come a long way from its perch as one of the biggest employers of immigrant laborers. It provided steady, if backbreaking, employment to successive waves of Jewish, Italian, Puerto Rican and Chinese immigrants.

“For Jewish immigrants arriving from the 1870s on, the majority of workers went to the garment industry,” said Annie Polland, the executive director of the American Jewish Historical Society. “The needle was what they had to stitch them into American life.”

By the 1930s, the area’s centers of daytime Jewish life had begun to coalesce. The Garment Center Congregation began in the back of a barbershop in 1931; the Millinery Center Synagogue, the shul of choice for the hat-making industry, organized in 1933; the Fur Center Synagogue started in 1935. Each had a permanent location within a few decades.

Around them were other supporting actors of Jewish professional life: delis and unions. There was Dubrow’s Cafeteria, and Lou G. Siegel’s. There were the union shops operated by industry titans like the Internationa Ladies Garment Workers Union.

Over time, they faded away. Dubrow’s shutered in the eighties; Lou G. Siegel’s gave way to Ben’s Delicatessen in 1996. The furriers’ synagogue closed, and the ILGWU merged with another textile union. 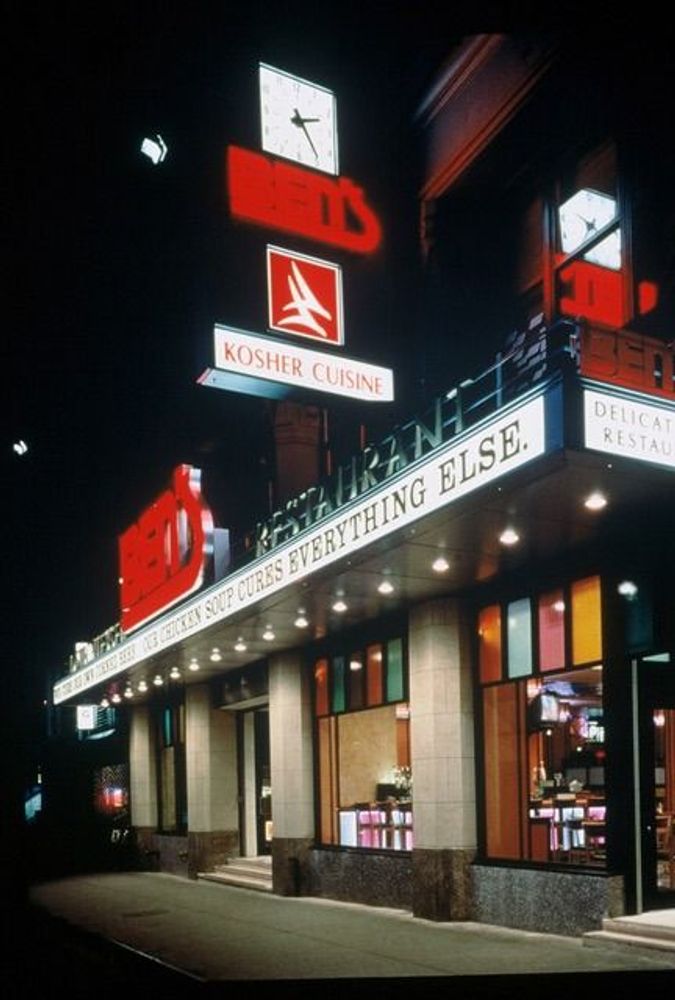 Polland says the disappearance of the cultural pillars of the Jewish Garment District has to do with many factors: outsourcing manufacturing to China, the movement of Jews into the upper class and out of the manufacturing business. Jewish families also wanted to put some distance between them and the sweaty, sometimes dangerous world of garment factories.

“No matter where you come from, you don’t want your children to work in the garment industry,” Polland said.

But the Garment District is now a peripheral Jewish part of New York City for another reason: except for a few synagogues, the Jewish community never bothered to build strong roots there. That’s because the synagogues weren’t built to accommodate a community but rather for the needs of 9-to-5 workers in the garment industry, says Jeffrey Gurock, a professor of Jewish history at Yeshiva University.

“It was legendary that people went there to pray before they worked,” even on Shabbat and holidays, Gurock said of places like the Garment Center Congregation and the Millinery Synagogue.

“It remains an iconic place in terms of Jewish memory,” Gurock added. “It’s not really much part of the Jewish community.”

The synagogues’ professional focus, however, may be what saves them — and Ben’s.

Indeed, the majority of the Garment Center Synagogue’s congregants are now white collar workers, says Arnold Brown, the shul’s president. They come to say the mourner’s prayer for their deceased loved ones, or, if they’re observant, to pray the rabbinically mandated three times a day. Though both the Garment Center Synagogue and the Milliner Center Synagogue around the corner are Orthodox, with partitions separating the men’s and women’s sections, they tend to attract some Conservative Jews who want to make a minyan.

Brown says that the synagogue is now known best not for its fealty to one industry, but its own consistency.

“They feel that the shul was there for them when they needed it,” he says of the synagogue’s regular congregants. “We’ve been in existence 85, 90 years. It’s something that they can rely upon.” 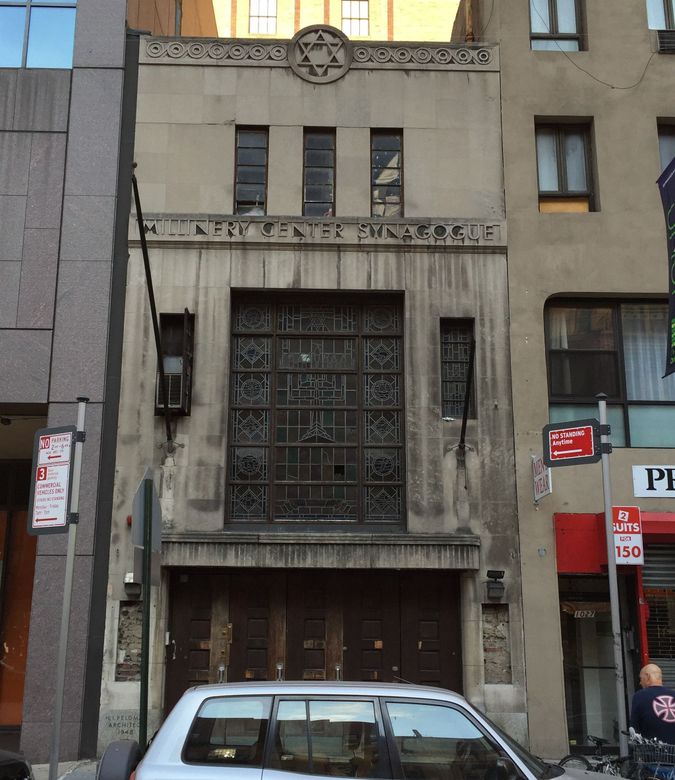 The Millinery Center Synagogue, on 6th Avenue. Image by wikimedia

The synagogue now caters to its ongoing image as a daytime synagogue: Member dues are $150 a year, which is pocket change compared with what other synagogues ask, and easy enough to pay for in addition to membership elsewhere. Brown said that they get about 15 people for morning services on weekdays and as many as 60 for the afternoon service.

Nearby, the Millinery Center Synagogue gets a similar number every afternoon, according to two members who spoke to the Forward. One estimated that less than a third of the congregants are still in the Garment Industry.

For Ben’s, the industry changeover is also welcome. And it doesn’t hurt, Ronnie Dragoon said, that there is a residential boom in Midtown East.

“It’s been an interesting ride, especially since I was on the cusp of decline,” he said.